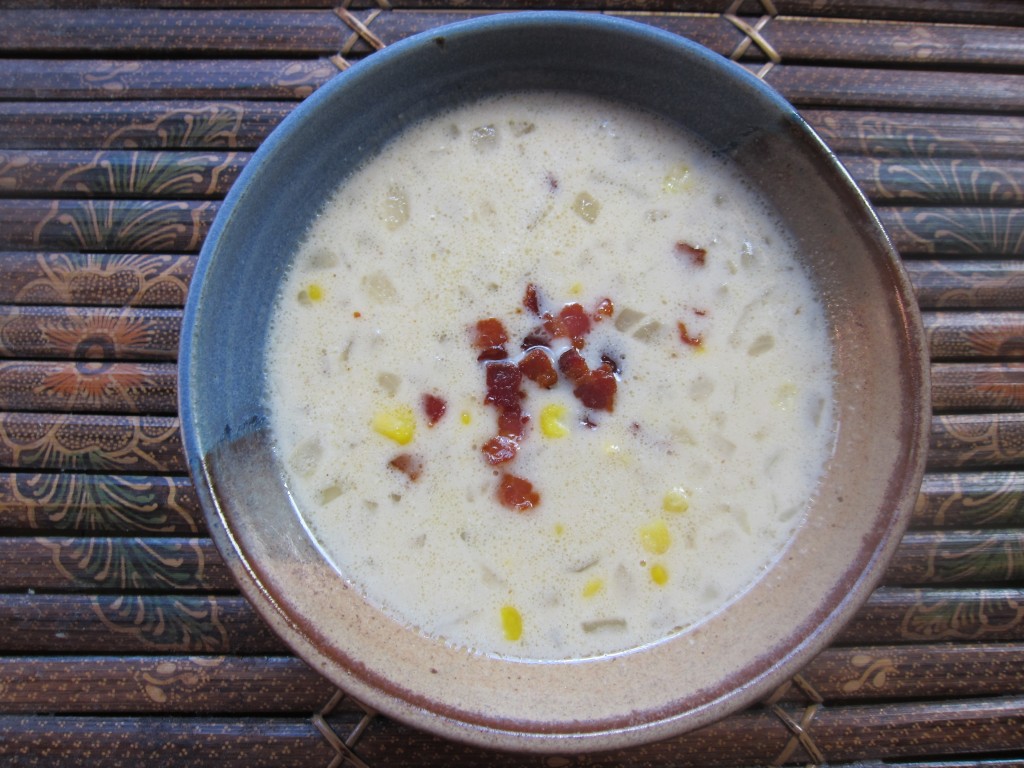 The recipes, of course, have been lovely. As have the beautiful photos of creative dishes ranging from BLTs to kitchen-sink concoctions.

But in the close to two years that I’ve had a monthly virtual lunchdate with food bloggers spread out from California to Paris, the thing I’ve most adored is the friendships that have formed, firmly sealed via a shared love for cooking.

Over Let’s Lunch dates and regular Tweets, this trusty band of bloggers has gotten rather fond of one another. So when our dear Karen mentioned that she couldn’t join us for lunch in May because of a strict liquid diet due to cancer surgery, our decision was clear. If Karen had to have liquid lunches in May, then well, so would we.

What to make for lunch? After regretfully dispelling the idea of martinis — delicious, though probably not the most healthy — a filling, hearty chowder came to mind …

One of my favorite home-made chowders is an old Gourmet magazine recipe for cheddar and corn chowder that I like to pull out during cold winter months when I’m craving summer’s sweet corn and looking for a weeknight dinner that’s both easy and oomphy. In spring, this chowder feels just a smidge too rich, however. But I had an idea for how to tone it down a little.

First, I started with the bacon, chopped up into little bits… 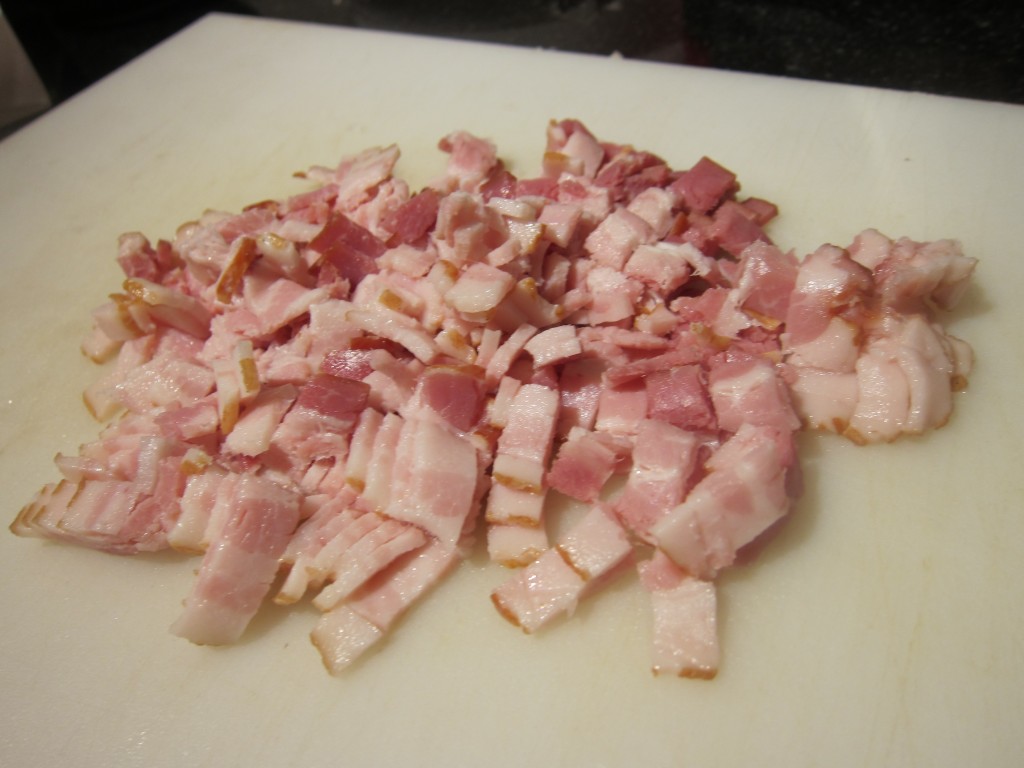 … tossed into a pot and fried to a crisp.

When that was done, the bacon came out and in went the onions, some butter, cumin, and later on, chicken broth and finely diced potatoes. 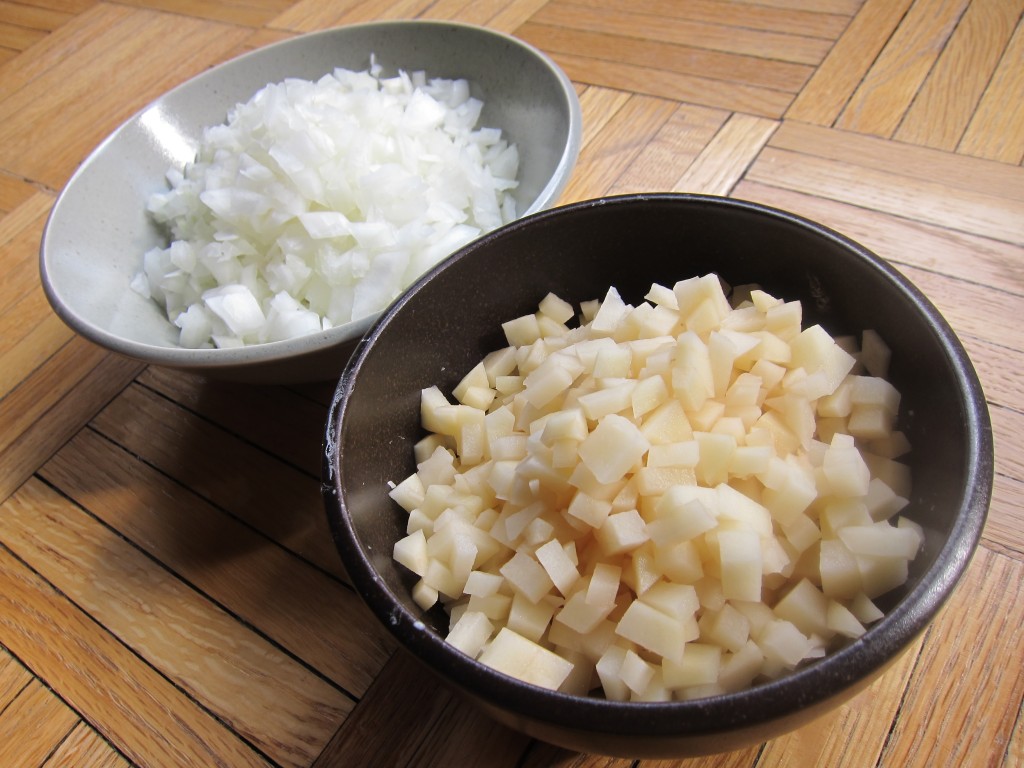 Now, toward the end, you finish off the chowder by stirring in heavy cream and shredded cheddar. To cut the fat content of the soup, however, I decided to try a trick I learned from an interview I did with chef Brad Farmerie of New York City’s Double Crown restaurant for the Wall Street Journal. To spice up his mashed sweet potatoes at Thanksgiving, Farmerie packs it with Japanese miso paste, saying that “the richness and umami come from miso and allow you to not add so much butter.” 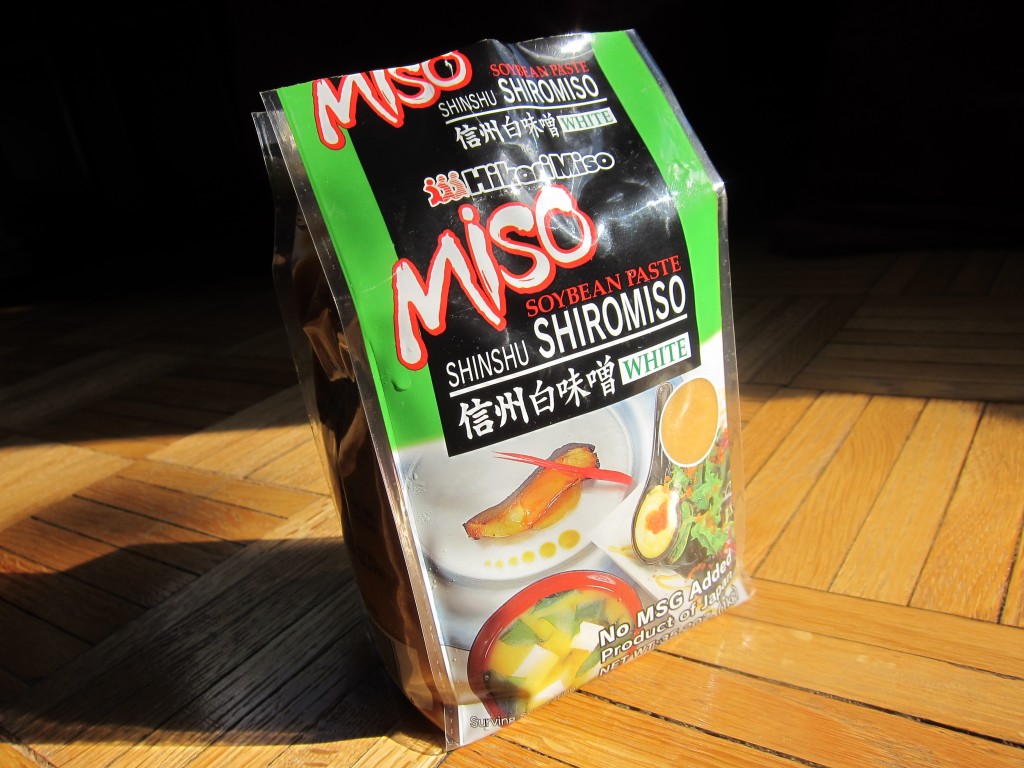 So instead of adding cheddar to the mix, I gradually added little globs of miso, which did indeed lend a unique dimension to the chowder. The end product was irresistible — the combination of corn, potatoes, chicken broth and cumin spiked with earthy, creamy miso and topped with bits of crunchy bacon, was unbelievable, if I may say so myself.

I had worried that I would miss the rich cheddar taste that I love so much about this chowder but the miso more than makes up for it — and its distinct flavor is an added treat, especially if you are a fan of the salty Japanese soup. 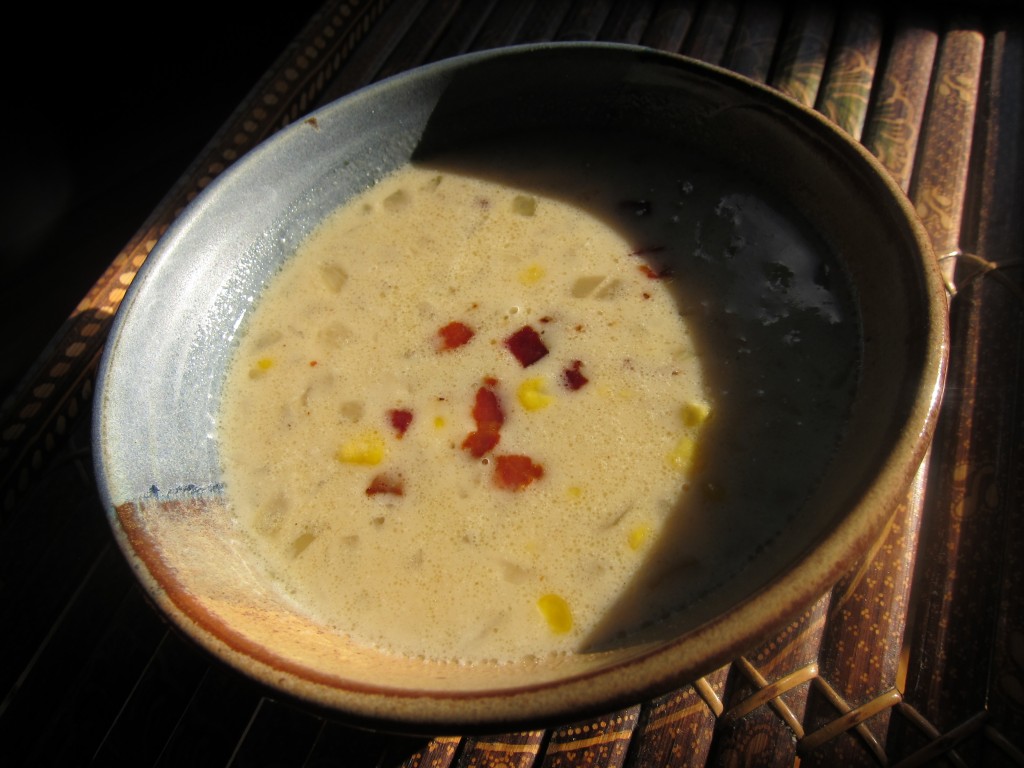 This chowder is more than a meal on its own but it’s also delicious served with piping hot biscuits and a side salad.

This one’s for you, Karen. Get well soon, dear!

Denise‘s Mango Lassi at Chez Us

Steff‘s Gazpacho at The Kitchen Trials

(Based on a recipe from Gourmet magazine)

Cook bacon in a heavy saucepan over moderate heat, stirring, until crisp and transfer with a slotted spoon to paper towels to drain.

Serve topped with bacon, with a salad and hot crusty bread.