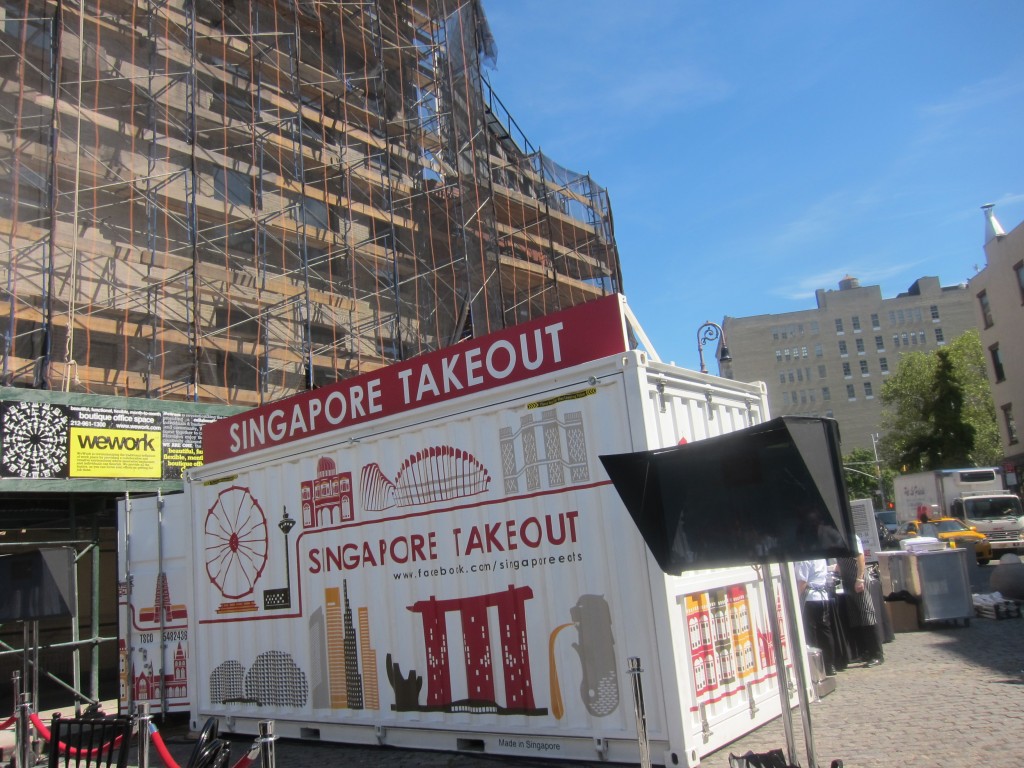 Calvin Trillin once wrote of Singaporeans: “Culinarily, they are among the most homesick people I have ever met.”

Truer words have rarely been said. Thankfully for us homesick transplants, however, the Singapore Tourism Board has been on a publicity rampage recently, ever determined to spread the gospel of our extraordinary cuisine.

And so it was that I found myself in the heart of New York City’s fashionable Meatpacking District on Friday, soaking in the heady smells of a creamy spicy laksa brewing, trying to quell my palpitations. Before us was a shipping container, a portable kitchen that the tourism board designed to travel the world, hitting nine cities starting with London in June and ending with Sydney in March 2012.

Starring in New York’s “Singapore Takeout” was chef Malcolm Lee, who helms Singapore’s Candlenut Kitchen, a restaurant that serves traditional Peranakan food, a Straits Chinese cuisine that combines flavors from the Straits of Malaya and China.

Chef Lee will be serving up Singaporean food in New York Sept. 17 and 18 from noon to 3 p.m. and I was lucky enough to get a sneak preview before the public gets to have its first bite …

After much too much speechifying and fanfare — sorry, Singapore, our stomachs were impatient — the container began to unfold … 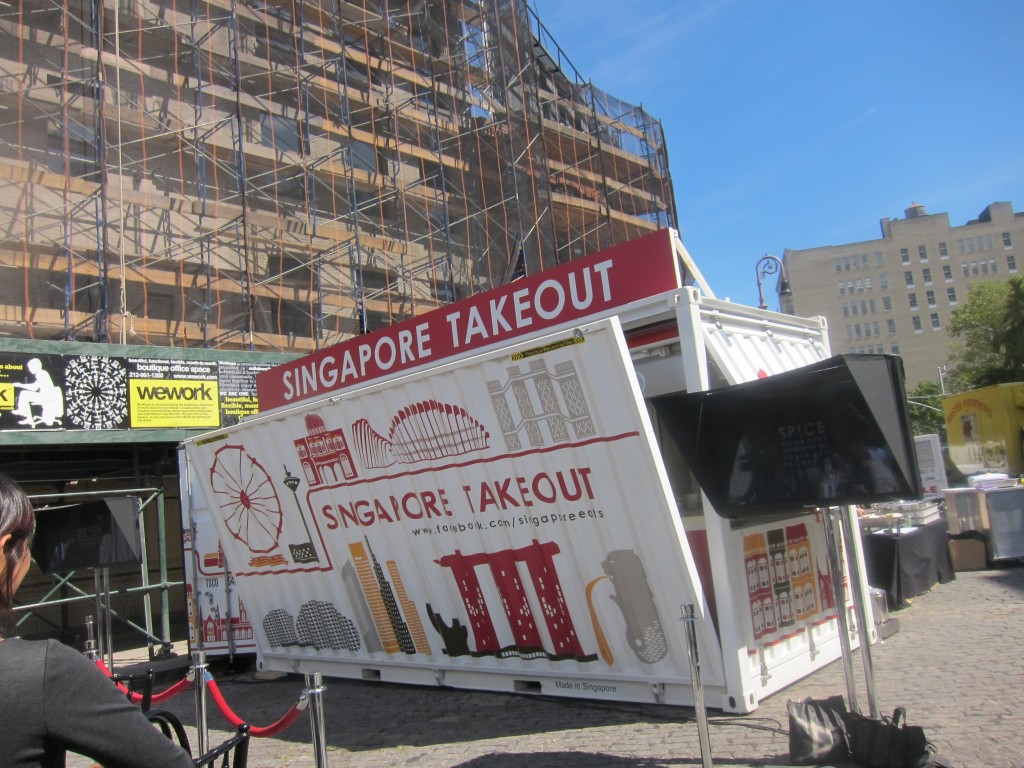 … revealing Chef Lee inside it (along with New York chefs Anthony Ricco of Spice Market, pastry chef Dominique Ansel and Ed Cotton of Plein Sud, who cooked in Singapore as part of “Top Chef” Season Seven). 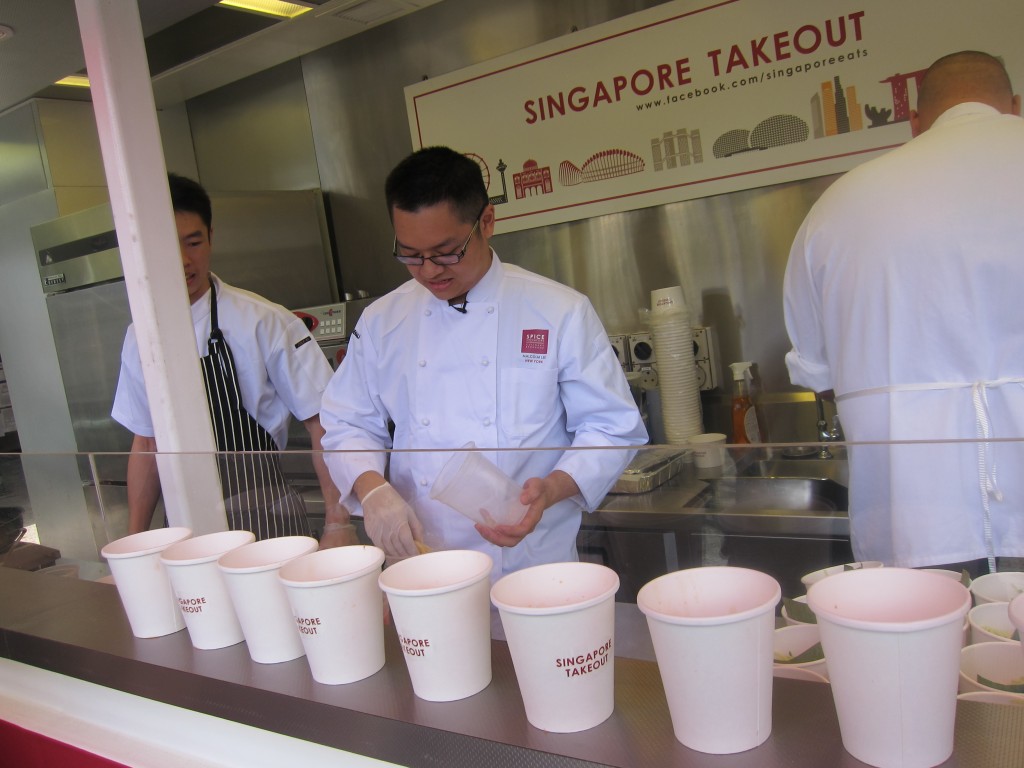 The samples are small — but hey, they’re all free. So one really can’t complain.

Plus, you get to watch the cooking crew assemble the dishes on the spot. 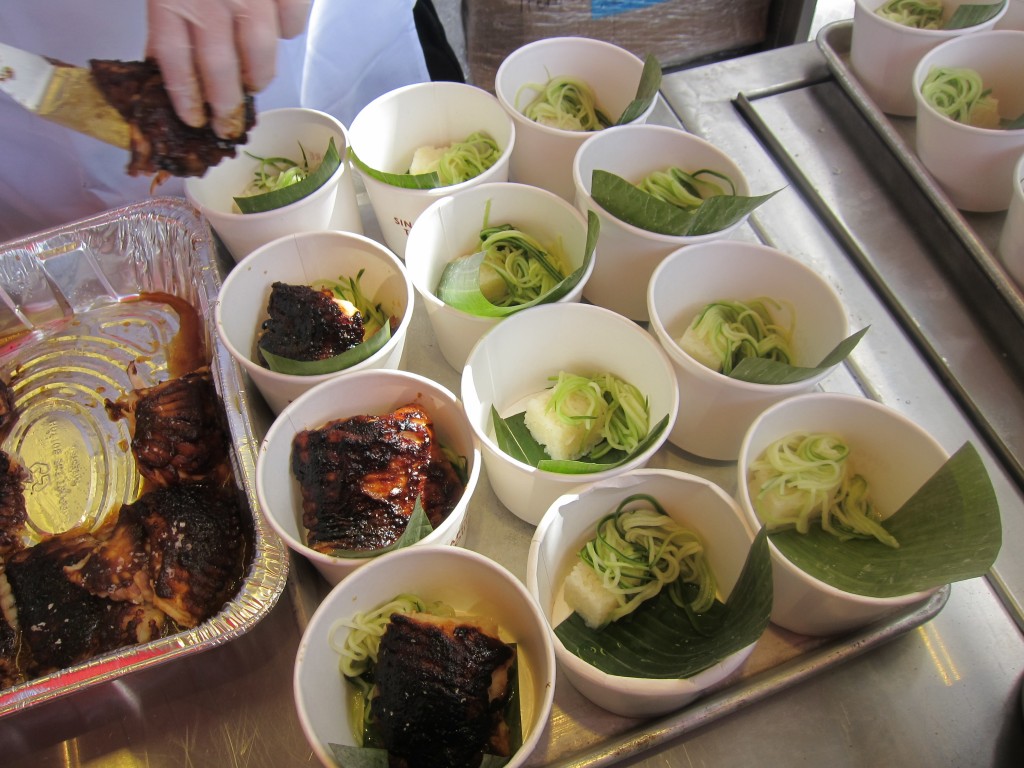 I’d been eager to try what had been billed as “Newton Circus Skate,” a dish of barbecued stingray (skate) slathered with fiery hot sambal (chili paste) that many visitors to Singapore know from Newton Circus, the country’s most tourist-infested hawker center. (Hawker centers, by the way, are outdoor foodcourts in Singapore where the country’s most delicious dishes and talented cooks can be found.)

This dish is a must whenever I go home — when done well, the skate is incredibly sweet and juicy, the sambal is so hot you’ll find yourself madly reaching for that ice-cold beer after just a few bites and the combination of flavors is taken up a notch with a hint of lovely char from the skate’s recent spell on the charcoal grill.

If you are craving what I just described, I’m afraid you won’t find it here.

The Singapore Takeout version — done by Anthony Ricco — is tasty, to be sure. (Certainly it likely would be lauded by anyone who has never had the actual Newton Circus stingray.) But the paste here is sweet rather than spicy and the skate, a rather thick cut, was a little tough.

(As always, my beef with versions of my country’s food presented in the west is, why name a dish after a specific dish served in a specific place when it’s nothing like the original? They could have just called this “Singapore-ish Skate.” Truth in advertising is not over-rated.) 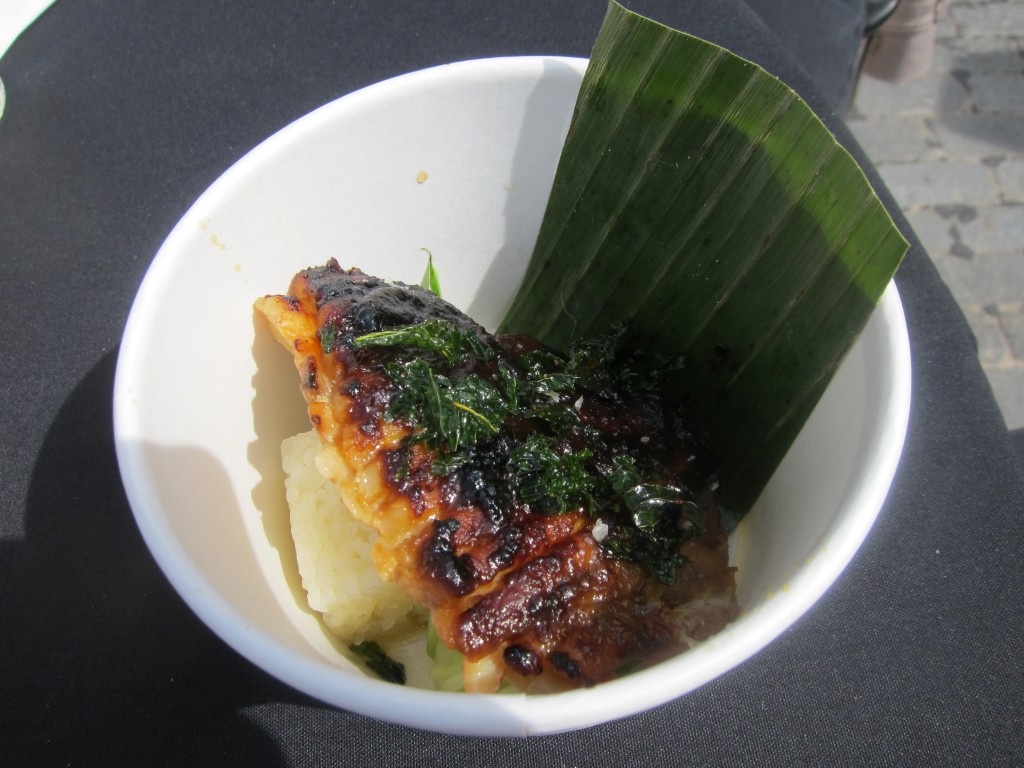 Malcolm Lee was similarly experimental with some of his dishes — although he is clear about that in his descriptions of his creations.

Curried stews made with buah keluak, a Malay black nut that tastes a bit like an intense truffle, are a staple in Peranakan cuisine. The nut is hard to find in the United States — in fact, I can’t recall ever seeing buah keluak on a menu in America. Lee’s short rib buah keluak is a modern take on the version he serves up in Singapore — deconstructed, topped with shrimp and served with a square rice cake. While it wasn’t what I expected, the flavors were delicious.

“When you grow up in Singapore eating your grandmother’s food, everything’s served in a traditional way,” he explained. “Your grandmother will say, ‘You must do this’ or ‘You must eat it that way.’ I wanted to try something different.” In fact, Lee mentioned that he’s planning to redo the menu at Candlenut Kitchen next year to make it a little more modern. 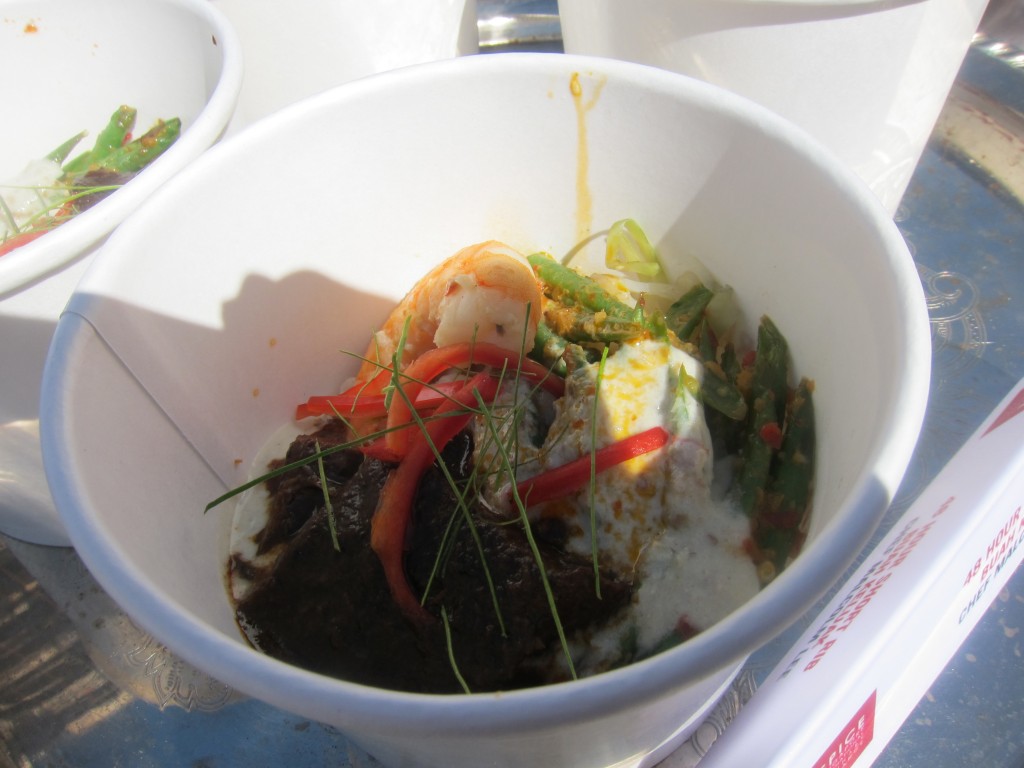 His slow-braised pork belly bun was more traditional — the pork, served with a blue ginger, lemongrass and soy reduction, was delicious.

(Although, the taste of it had me craving my mother’s pork belly buns, which have a stronger flavor from dark soy sauce and gobs of minced garlic and shallots.) 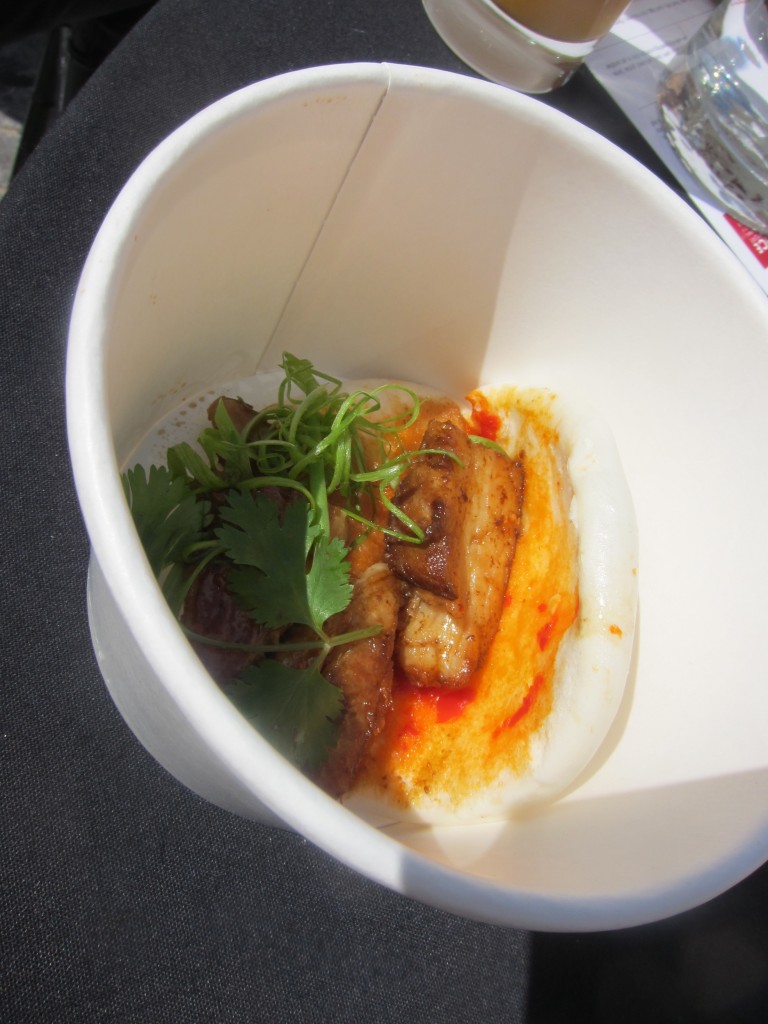 In the end, it was Lee’s laksa that blew me away. Good versions of this dish of noodles with shrimp, tofu and fishcakes in a creamy curried broth are hard to find in the U.S. — and Lee’s is outstanding. The broth was thick and complex, filled with the intense tastes of galangal, shrimp paste, candlenuts (which are similar to macadamia nuts), turmeric swirled together in a flabbergasting flavor tornado.

There was one taste that confused me at first, though — the cheesy flavor of a parmesan crisp Lee had added to the mix, saying it is similar to dried shrimp in a way. The Western addition worked, however — in fact, I wouldn’t mind it if this trend started to catch on among Singaporean hawkers. 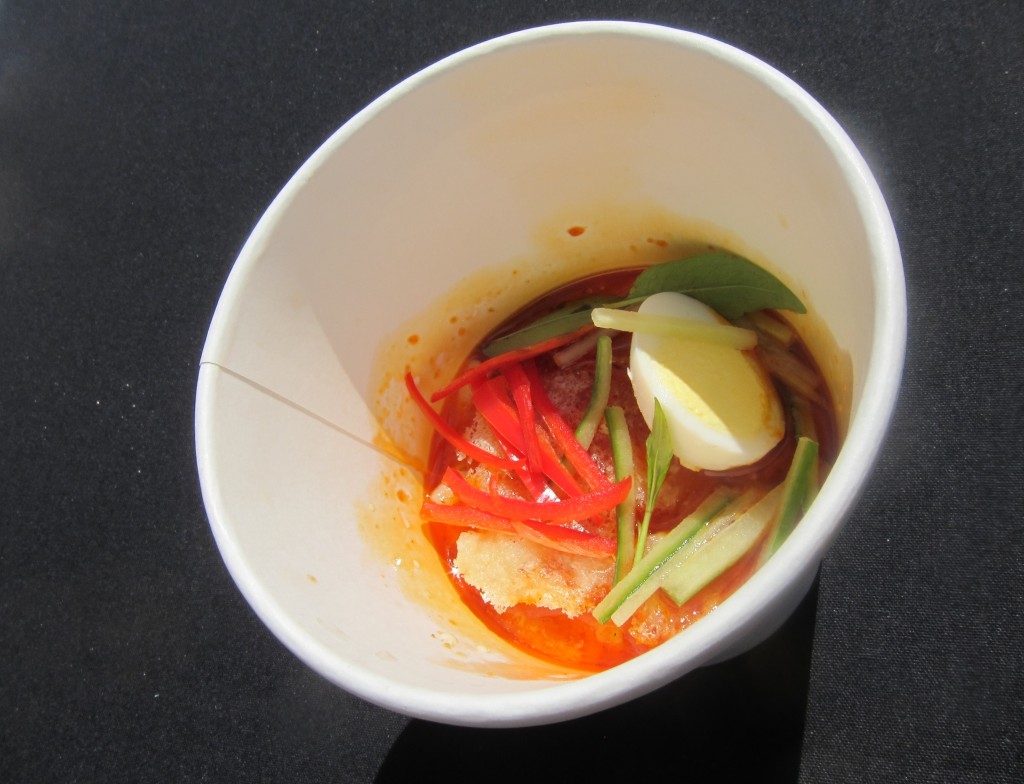 As Singaporean food goes, these dishes certainly weren’t carbon copies of the ones that occupy our yearnings when we’re far from home. Not that it mattters, however.

Consider my itch scratched. At least for now.