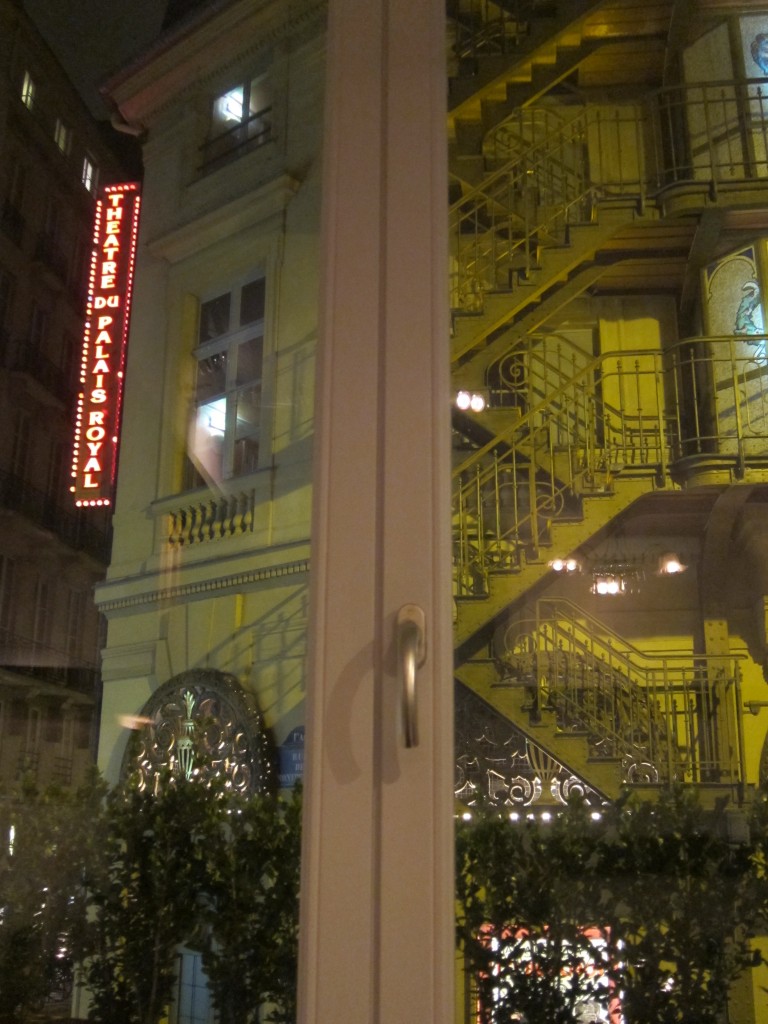 When two people have been cooking together online for almost three years, feeding a budding transcontinental friendship with tales of chili, liquid lunches and more, there’s a lot of pressure to make that first actual meal they have together truly special.

So when I started planning where I would meet Ellise (or, Cowgirl Chef, as you may know her, from the monthly Let’s Lunch posts on this blog) for the first time — in Paris, where she lives, no less — the hunt was on for a suitable place.

Where to meet? It turned out a little place we’d been curious about sounded just perfect: Verjus, a new-ish wine bar and restaurant near the Palais Royal by a young American couple who made waves in Paris a few years ago when they opened Hidden Kitchen, a private underground supper club in a tiny flat.

Now, I’d not been able to check out Hidden Kitchen in its heyday so when I heard that its owners — Seattlites Laura Adrian and Braden Perkins — opened a place last year that I could actually get into, I was all over it.

Almost as soon as I landed in Paris, off I headed …

The restaurant is in a darling space — just off the edge of rue de Montpensier, slightly hidden in a corner that you get to through a narrow passageway off the street. And it’s certainly a larger, more ambitious endeavor than Hidden Kitchen was.

As the couple explained in their email announcing Verjus: “The idea came because we felt like we had hit a ceiling on what we could do at Hidden Kitchen. At times, we were getting fourteen hundred e-mails a day requesting spots at our very limited Hidden Kitchen dinners. Even if we increased the frequency of the dinners in our home, we wouldn’t be able to accommodate all the requests. I personally felt like we had also hit a ceiling on what we could cook in our tiny home kitchen. If we had a larger facility, with better equipment, all the food we were serving could be elevated.”

The decor is a little Californian — clean and inviting — but with a lovely view through its tall large windows. (You can also eat at the cozy bar downstairs, if you’re looking for something a little more noir.) 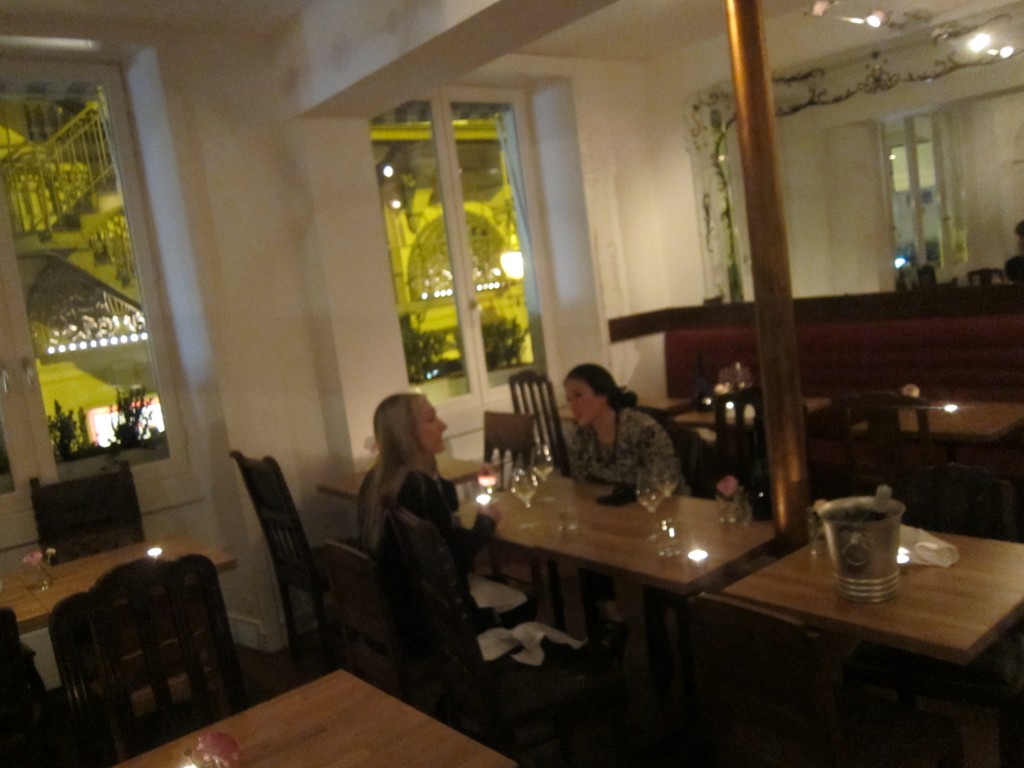 Although I had read about the vaunted fried chicken in a few places, we decided to keep things simple and go with the restaurant’s five-course market menu — 55 Euros; 85 Euros with wine pairings. (I should mention that Miami native Juan Sanchez, owner of Derniere Goutte, a wonderful little wine store in Saint Germain des Pres, has compiled a very fine wine list for the restaurant. The wine pairings for our meal were very thoughtfully selected and just outstanding.)

Our meal began with a bang — an amuse bouche of a little potato topped with creme fraiche and roe. The combination of flavors and textures in this little bite was intense — I immediately wanted another after inhaling mine. 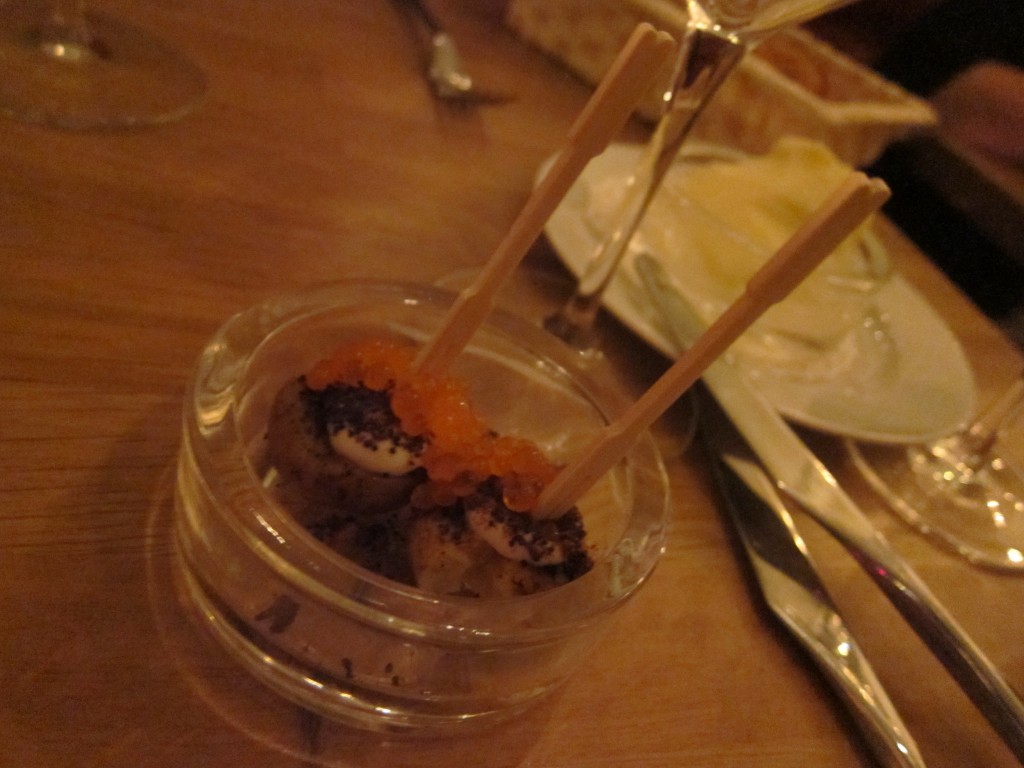 The chefs here pride themselves in cooking with the freshest ingredients available — Paris locavore from nearby farms. This was evident in our first course: grilled sourdough with soy-candied brussel sprouts, radishes, arugula, avocado and burrata. Fresh greens aren’t usually the thing I gush about — but if this was the kind of salad I was getting all the time, I’d certainly be doing more gushing. 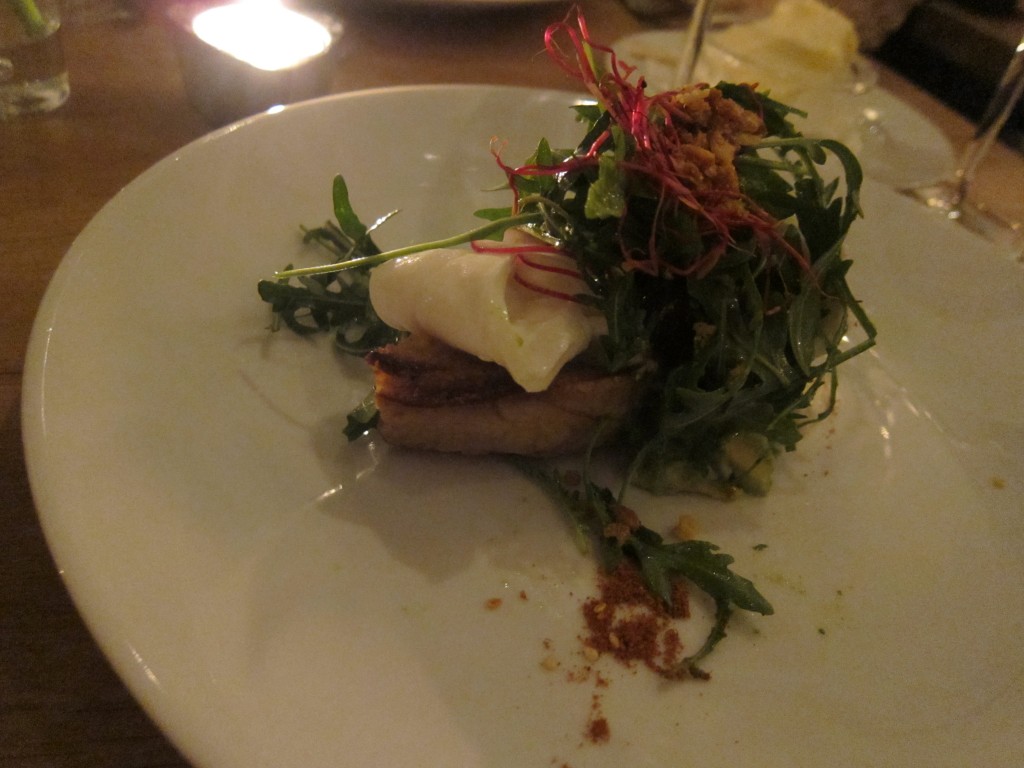 Next up, we had a skillet trout with mushrooms, picholine olives, ricotta dumplings and verjus jelly. (Verjus, by the way, is the tart juice of unripe wine grapes.) The fish was terrific but I have to confess the little chewy dumplings, with their slightly salty kick, were my favorite item on the plate. 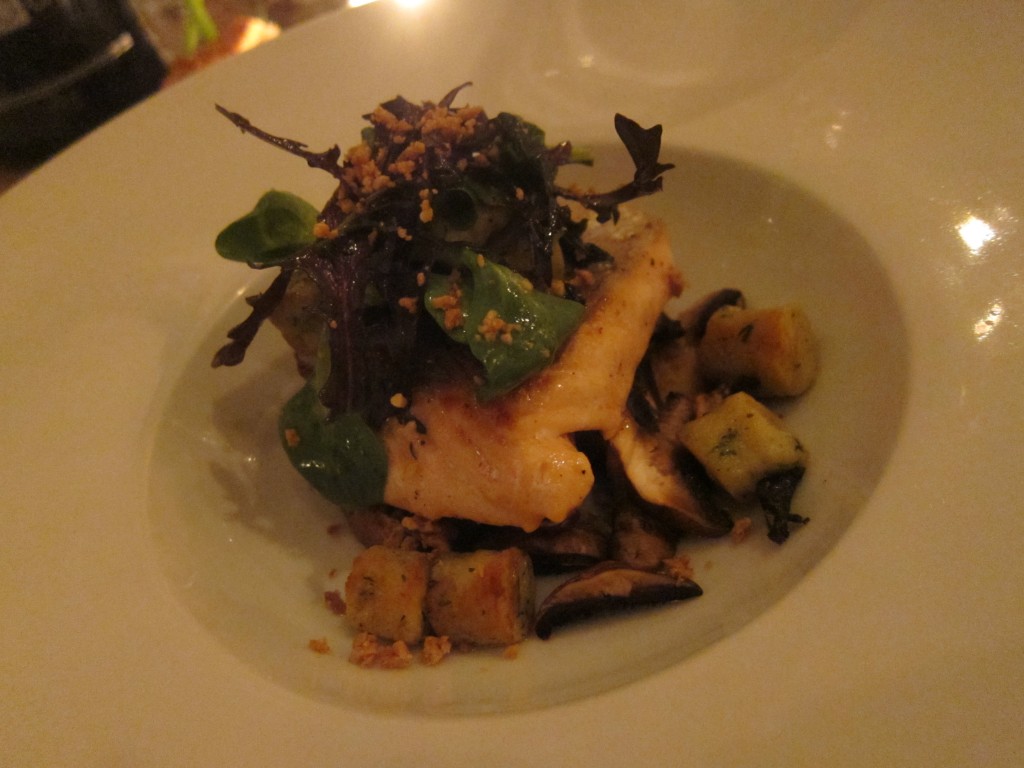 Our final savory course sounded promising — grilled milk-fed veal with miso labne, pickled cauliflower and nori crumbs — but ended up being slightly disappointing. The veal was tougher than I expected — and not quite as flavorful as I’d hoped. But the accompaniments made up for it a little — the cauliflower offered a nice tartness.

We decided to sample both desserts, the first of which was an American lunchbox classic: An oatmeal cookie.

I have to admit to feeling a little silly about eating an oatmeal cookie in Paris — I bake these all the time at home and, in fact, am incredibly picky about them. I almost never buy or order them anywhere in New York simply because I like the ones I make (sometimes with six spices or more) better than any others that I try.

Perhaps this was the problem here. Although the cookie was dressed up with tasty accoutrements (milk sorbet, bourbon raisins, hazelnut butter, roasted grapes), I was disappointed with how bland the cookie itself was. 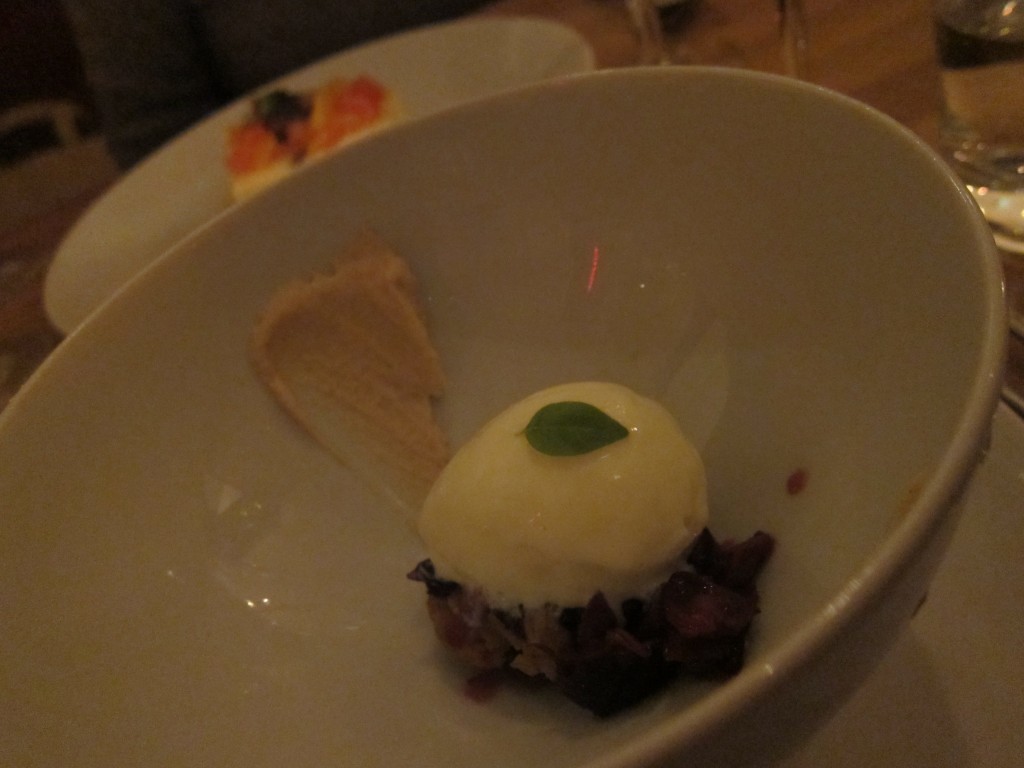 We had better hopes for the buffalo milk ricotta cake topped with grapefruit, blood orange, bergamot and tonka bean-poached kumquat. It looked beautiful on the plate and didn’t taste bad — but the cake itself was very dense and heavy and the texture was rather mealy. 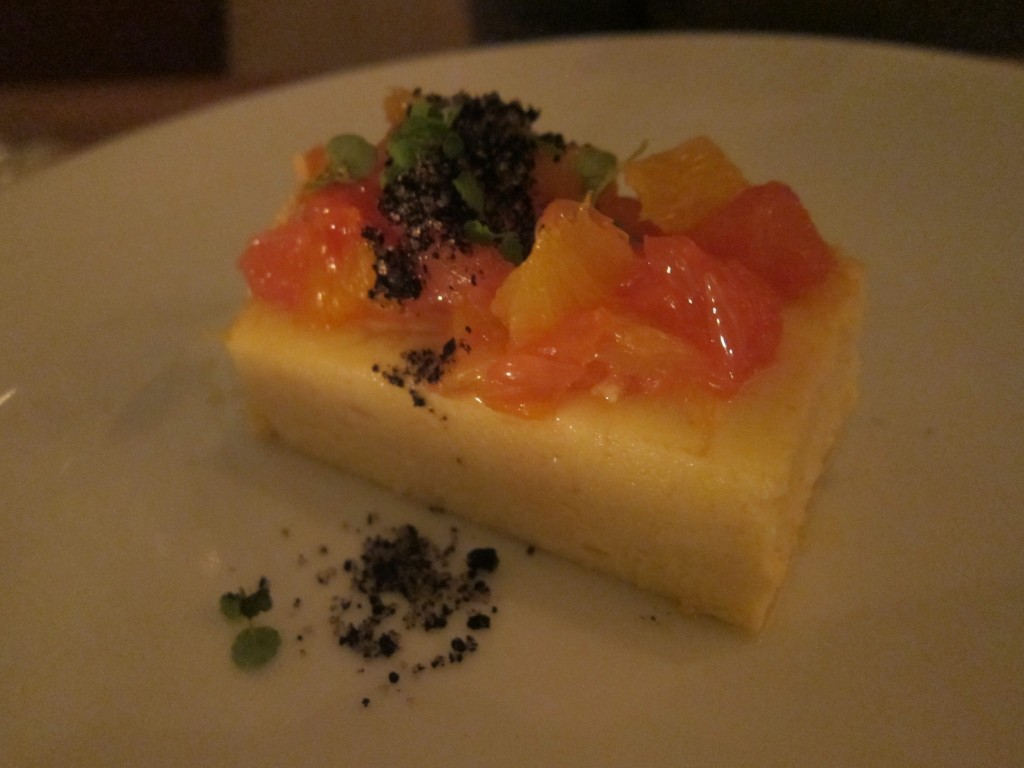 The little sugar cookies we got to close out the meal left us with a sweet note, however. 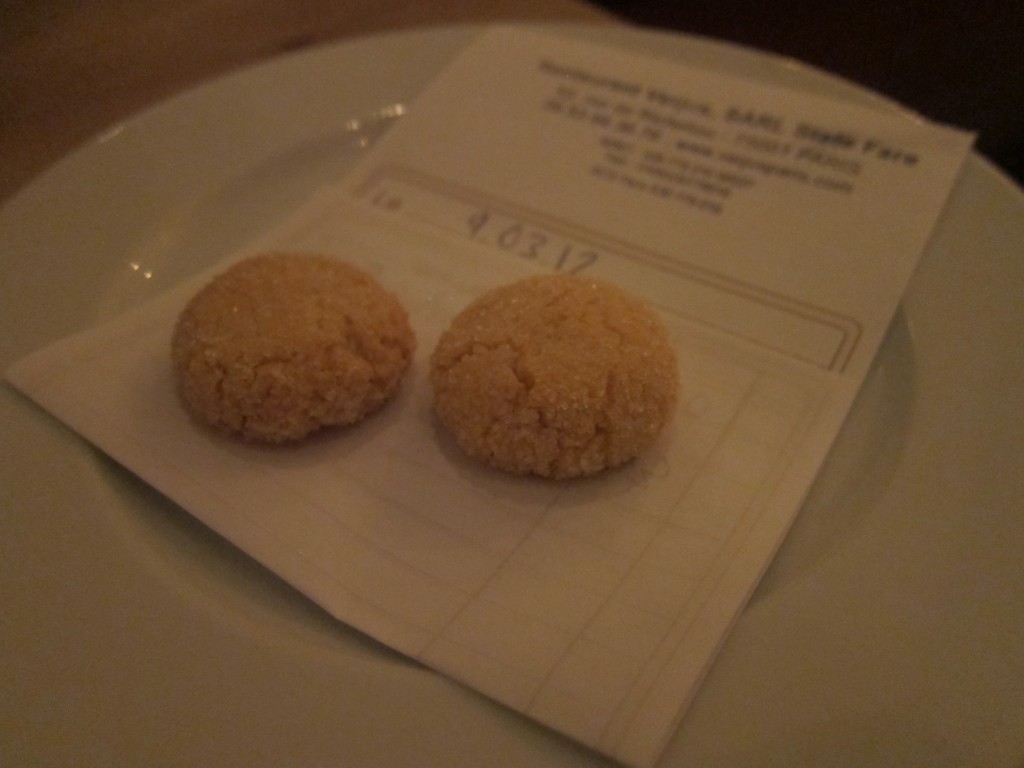 In the end, it didn’t entirely matter how the food was — our dinner was packed with one essential ingredient: delicious conversation. And after so many months of cooking together, it was nice just to be able to share a big hug.

So here’s to finally meeting, Ellise! And to many more years of Let’s Lunch … 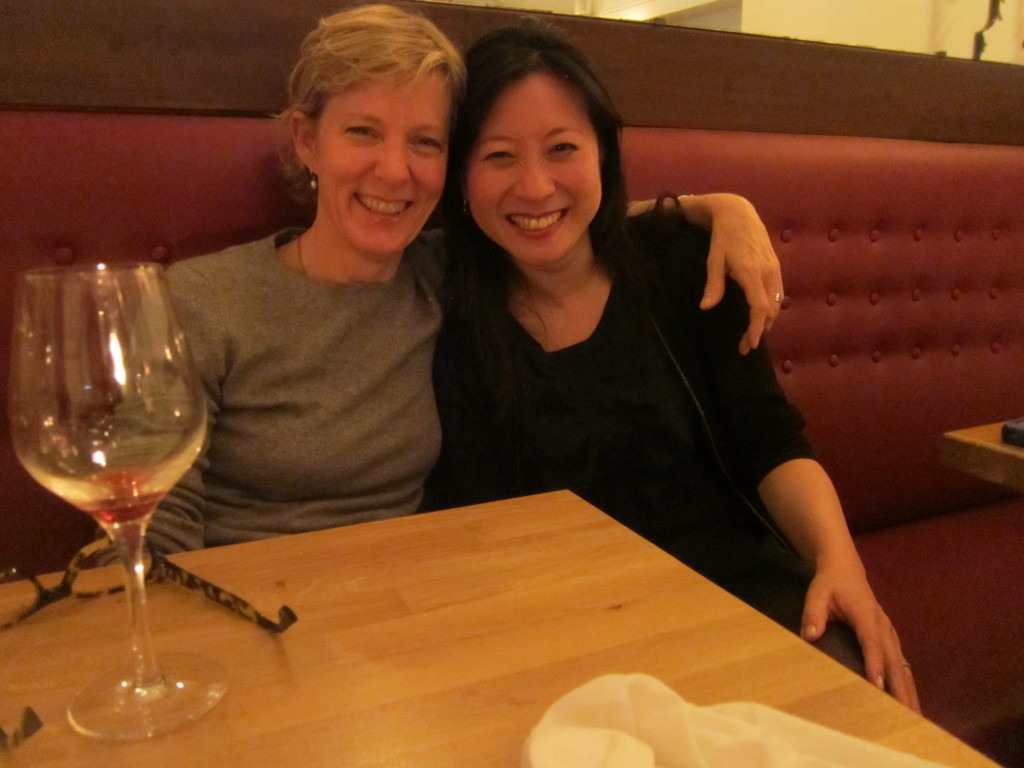