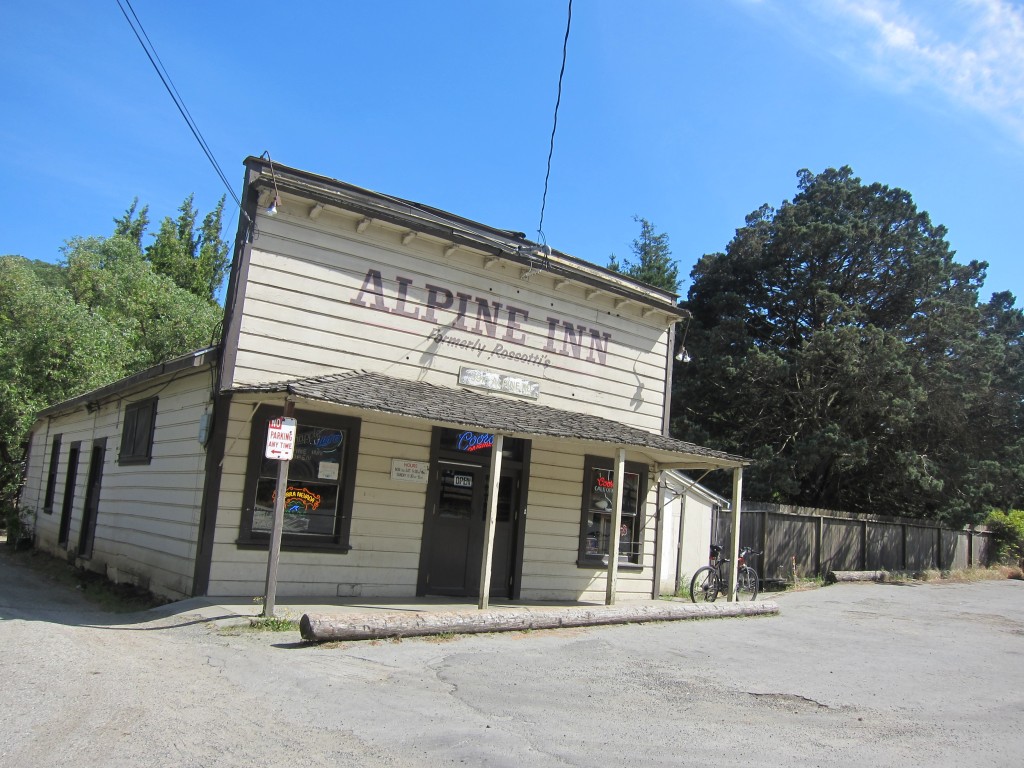 On a recent lazy spring afternoon, the sous chef and I went on a meandering drive along the winding mountain roads of Northern California.

After quite a few miles of sun-dappled trees and fetching vistas, as lovely as everything was, we realized something else had begun to occupy us. “Are you hungry?” he said, not really needing to know the answer. “I have a little something in mind …”

As he pulled into the small town of Portola Valley, the sous chef began to slow down. Amid the greenery, an empty parking lot emerged, anchored by a small wooden building that would not have looked out of place in an old Western movie.

First, a few things about Zott’s — it’s technically called the Alpine Inn (and has been for decades) but as its sign notes, it used to be “Rossotti’s” or Zott’s, and that’s what everyone who knows anything at all about the area still calls it.

Also, if it looks like it once housed a saloon — that’s not far off base. Zott’s once was a roadhouse, dating back to the 1850s supposedly, catering to Spanish & Mexican travelers along the Old Spanish Trail that runs near it.

How do I know all these things about Zott’s? The sous chef, who lived in the area for 17 years, was a regular there, heading over for a burger and beer in the parking lot on many a sunny day when he was an undergrad at Stanford.

As we walked through the swinging doors, he seemed surprised. “Nothing’s changed,” he noted, looking around and marveling at the dusty arcade games …

… and long benches and tables whose every inch was filled with deeply etched names. 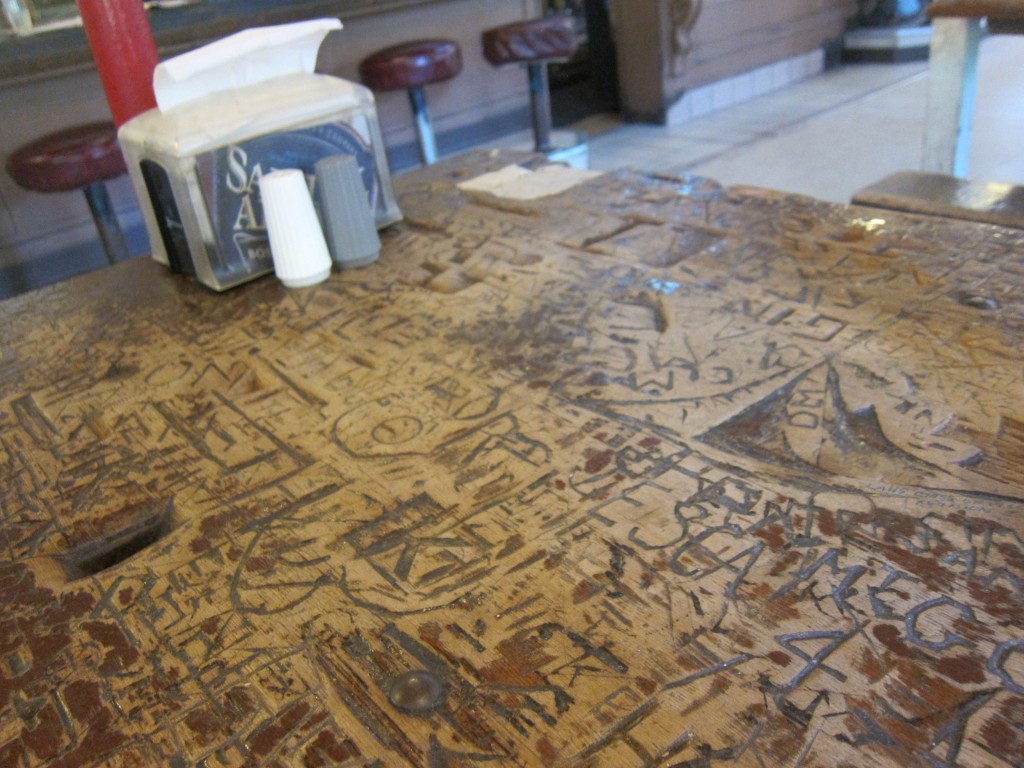 Over in a corner was a long condiments section filled with tubs of chopped raw onion, relish and more — and overlooking all of this was a busty model in a 1980s-style sporty headband seductively sipping a Coors from a straw. 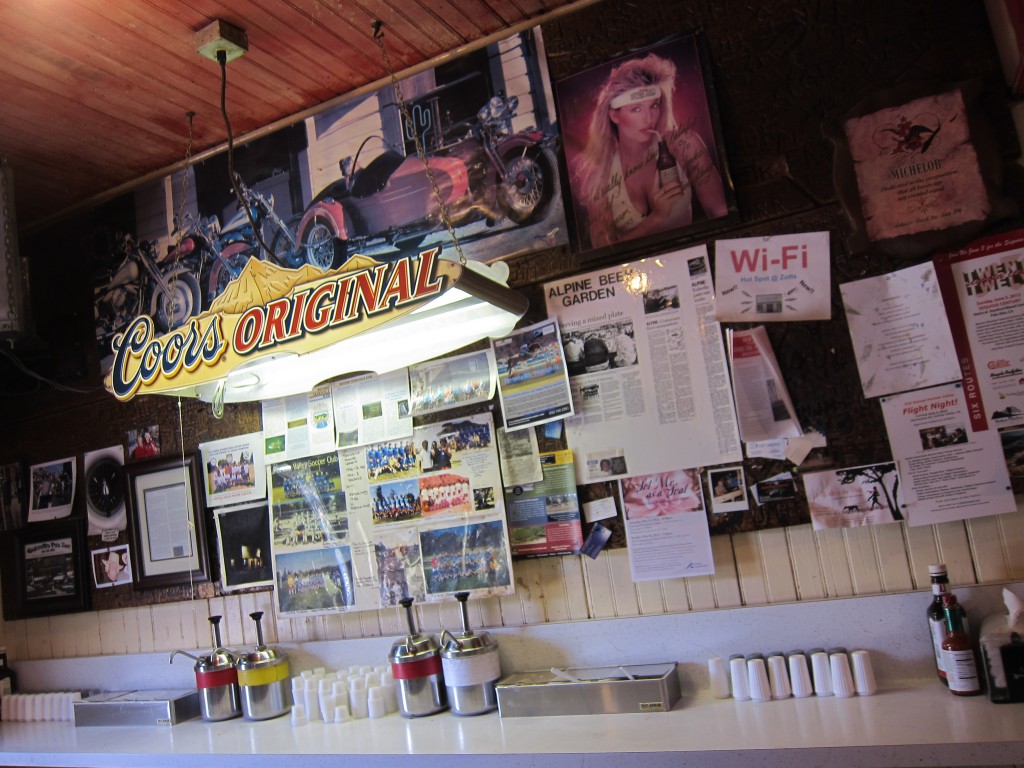 Zott’s, sous chef explained, can get overrun on weekends with college kids and bikers, who often stop in for a brew before pedaling back home. But early on a Monday, we pretty much had the place to ourselves. 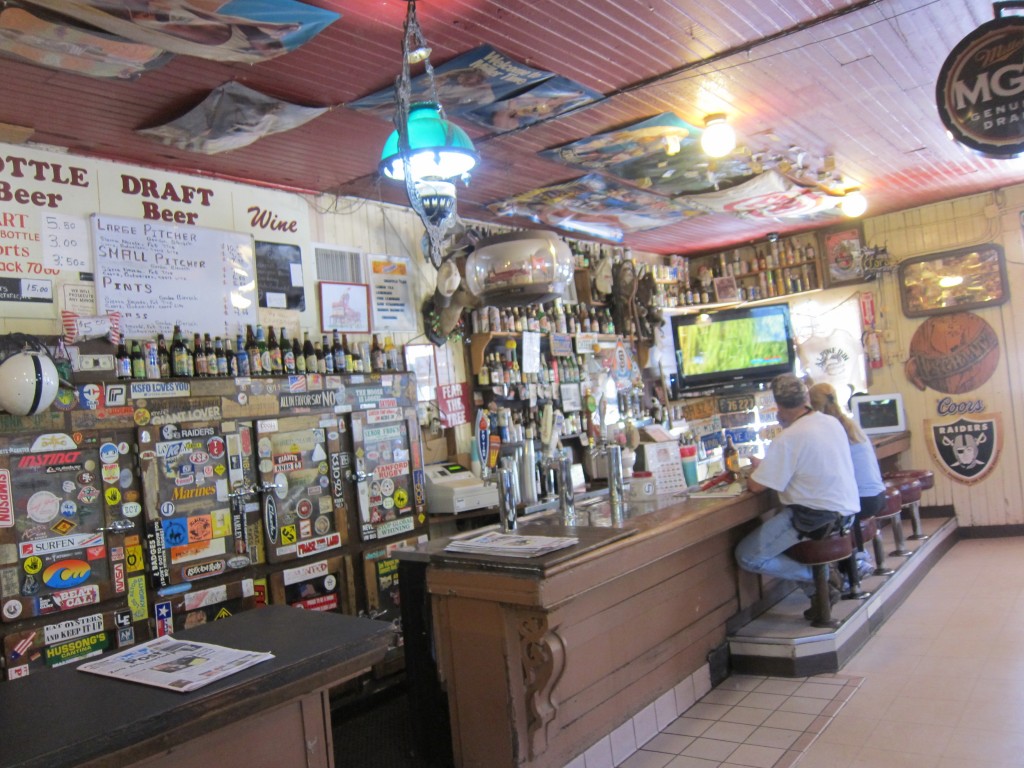 The menu is basic — and, sous chef warned, doesn’t exactly offer the best of food. 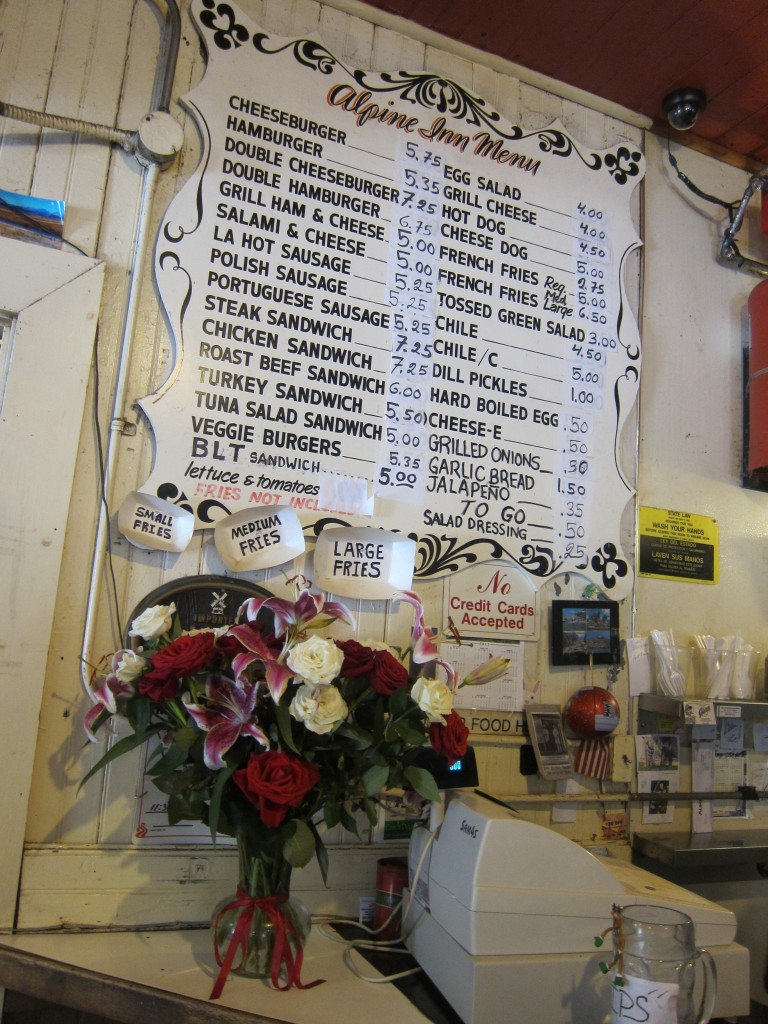 The cheeseburgers ($5.75) are the thing to get here, so that’s what we did. (As we placed our order with the tottering lady behind the counter, sous chef noted that she looked like the person who’d taken his burger orders there more than 15 years ago.)

And what we got was an interesting sight — instead of a classic round bun, these came in soft long rolls that had been greased and toasted on the griddle, topped with a rectangular patty topped with melted cheese. (Our single cheeseburger’s patty didn’t quite reach both ends of the bun, making us wish we’d ordered a double for $7.25 instead to ensure full coverage.)

How was it? Not the best I’ve had — but then again, I live in New York, a city that’s lousy with phenomenal burger joints.

But the combination of the soft flavorful bun with crunchy lettuce and very nicely grilled patty, topped with oozy cheese dripping off its sides, hit the spot. 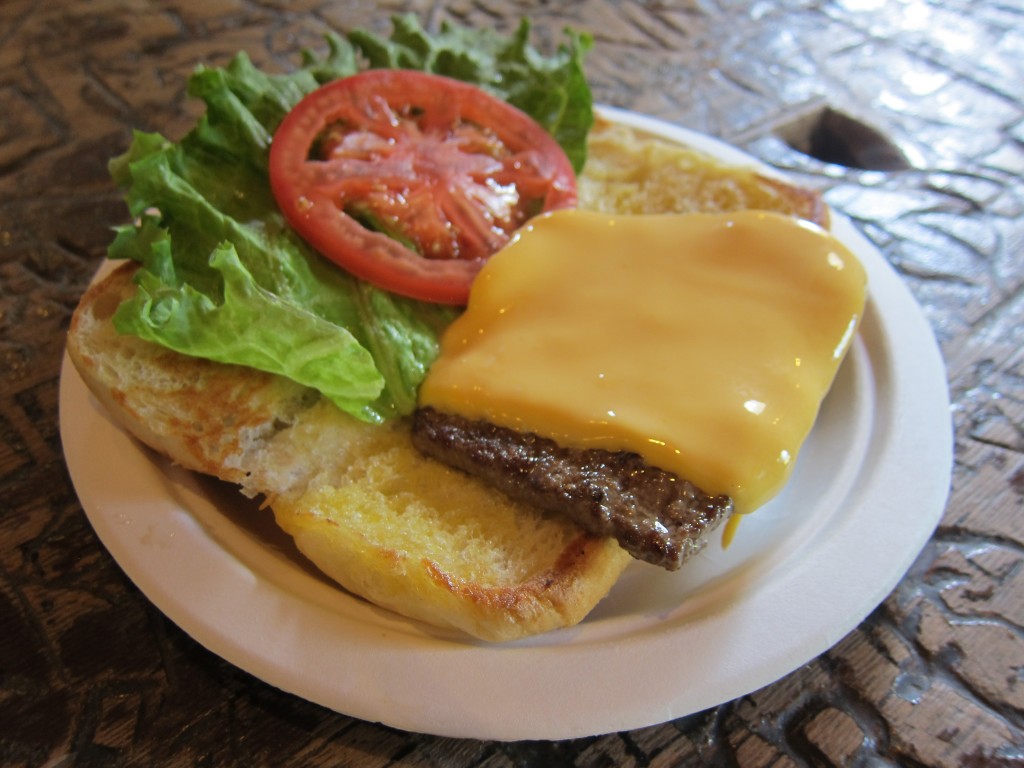 And our fries — crispy crinkle-cut fries, served super hot — were a great capper. 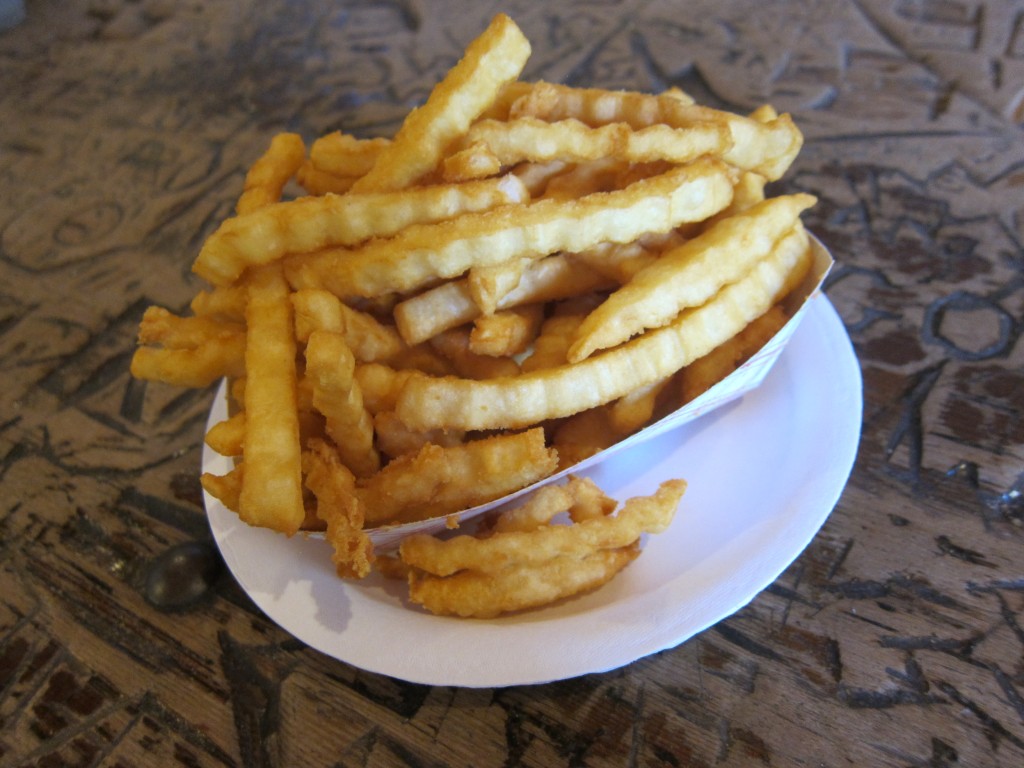 Simple or no, our meal had been satisfying. As we rolled out of the saloon, it was not hard at all to see why decades may have passed, towns and cities all around may have transformed immensely and yet, over at Zott’s, not one thing appeared to have changed.

It’s hard to improve on an already perfect experience — at Zott’s, we left thankful that no one (thus far) had tried.