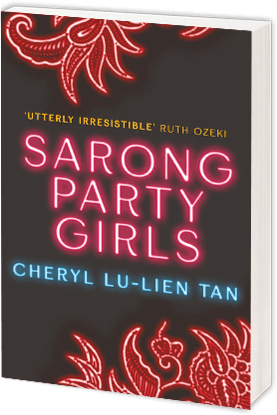 A brilliant and utterly engaging novel Emma set in modern Asia about a young woman’s rise in the glitzy, moneyed city of Singapore, where old traditions clash with heady modern materialism.

On the edge of twenty-seven, Jazzy hatches a plan for her and her best girlfriends: Sher, Imo, and Fann. Before the year is out, these Sarong Party Girls will all have spectacular weddings to rich ang moh Western expat husbands, with Chanel babies (the cutest status symbols of all) quickly to follow. Razor-sharp, spunky, and vulgarly brand-obsessed, Jazzy is a determined woman who doesn’t lose.

As she fervently pursues her quest to find a white husband, this bombastic yet tenderly vulnerable gold-digger reveals the contentious gender politics and class tensions thrumming beneath the shiny exterior of Singapore s glamorous nightclubs and busy streets, its grubby wet markets and seedy hawker centers. Moving through her colorful, stratified world, she realizes she cannot ignore the troubling incongruity of new money and old-world attitudes which threaten to crush her dreams. Desperate to move up in Asia s financial and international capital, will Jazzy and her friends succeed?

Vividly told in Singlish colorful Singaporean English with its distinctive cadence and slang Sarong Party Girls brilliantly captures the unique voice of this young, striving woman caught between worlds. With remarkable vibrancy and empathy, Cheryl Tan brings not only Jazzy, but her city of Singapore, to dazzling, dizzying life.”

“Sarong Party Girls is utterly irresistible. I fell in love with the fresh, exuberant voice and trenchant wit of Jazzy and her girl posse, but before long, I realized that something else was going on, as well. In her debut novel, Tan is saying something profound and insightful about the place of women in our globalized, capitalized, interconnected world.”
— Ruth Ozeki, author of “A Tale for the Time Being”

“In Singapore this satirical novel of predatory beauties would be regarded as deeply subversive – for the rest of us, and anyone familiar with life in that little island city state, it is hilarious and original.”
— Paul Theroux

“Scarlett O’Hara would have met her match in Jazeline Lim, the brazen, striving, yet ultimately vulnerable heroine of this bold debut novel. Tan paints a stark portrait, comic yet chilling, of a society in which a young woman who seeks a way out risks falling in too deep.”
— Julia Glass, author of the National Book Award winner “Three Junes” and “And The Dark Sacred Night”

“Wildly original, daring, hilarious and heartbreaking in equal measure—Sarong Party Girls is written in a unique and captivating voice unlike any I’ve read before. The unforgettable Jazzy will seduce you with her no holds barred–at times jaw-dropping–account of what it’s like to be young and female and on a quest for love in modern-day Singapore.”
—John Searles, best-selling author of “Help For The Haunted” and “Strange But True”

“Through the insouciant voice of her heroine, Tan delivers a stinging and deliciously subversive critique of Singapore’s patriarchal social system. You’ll be so busy laughing at Jazzy’s outrageous cheek, you won’t notice until it’s too late that your heart has been broken.”
—Hillary Jordan, author of “When She Woke”

“Darkly funny, Sarong Party Girls is one very determined woman’s journey through modern Singapore, an intoxicating crossroads of culture, money, and ambition. Jazzy Lim’s brassy and brave quest for a better life crackles with the cadence and rhythm of her city, where love and success feel impossibly at odds, and neither tradition nor the future are quite what they pretend. Her voice is utterly new and engaging, bringing her world to vivid life from the first sentence.”
—Ayelet Waldman, author of “Love and Treasure”