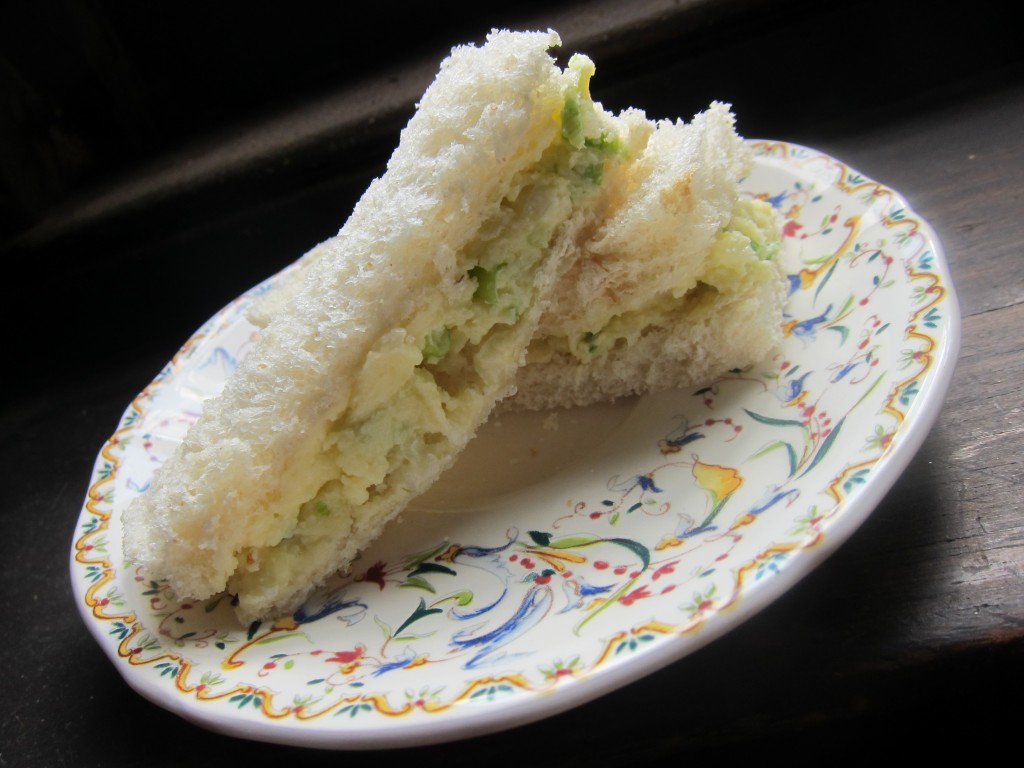 If you’ve never had high tea in Singapore, add it to your bucket list.

These feasts, often buffets,  typically unfold over a few hours in posh hotels — all the better if they’re of the colonial variety such as the country’s fabled Raffles — and feature heaping tables of sweets (scones, clotted cream, jam, tiny tarts) as well as hearty servings of local savory dishes such as curry, noodles, steamed Chinese buns and more.

I always look forward to the scones, cakes and tarts — what proper post-Colonial Anglophile wouldn’t? But it’s often the dainty finger sandwiches that I covet first. Cucumber, sweet curried chicken — I can never get enough.

So when my monthly virtual lunch-group, the Let’s Lunch bunch, decided on doing high tea for October,  little sandwiches immediately went on my docket …

What sandwich to make? Watercress and cucumber seemed just a smidge too predictable.

What appealed far more was a British sandwich I’d been reading about but had never sampled — cheese & onion, one of the most classic and basic British sandwiches, eaten by the young, the old, the poor and, well, perhaps the rich. It’s so common in London lunchboxes that grocery stores there sell tubs of pre-made filler. With no Tesco in sight in New York City, however, I set about figuring out how to make this sandwich — or, sarnie, as the Brits call their sammiches.

For starters, it should be noted that the British do know their sandwiches — they invented them after all. John Montagu, the Fourth Earl of Sandwich, was said to have been so fond of gambling that he made his cook prepare his food in an easy-to-eat way, wedging meat between two slices of bread, so he could eat his meals at the table during a 24-hour gambling binge in the late 18th Century.

(A gambling-inspired meal — my late grandmother would have approved! She did, after all, create “gambling rice,” a one-bowl meal of rice with shrimp, shallots and shredded cabbage to serve to gamblers in the illegal gambling den she ran in her home. You’ll have to read “A Tiger in the Kitchen” if you want to find out more…)

When it comes to cheese and onion sarnies, however, no meat is involved. After seeing a blogger’s attempt to make one by simply slapping cheese and raw sliced onion between two slices of bread, I decided this would not be the shape my high tea sarnie would take.

Instead, I found a few recipes that called for a few kinds of chopped onions (usually green onions and sweet white onions) … 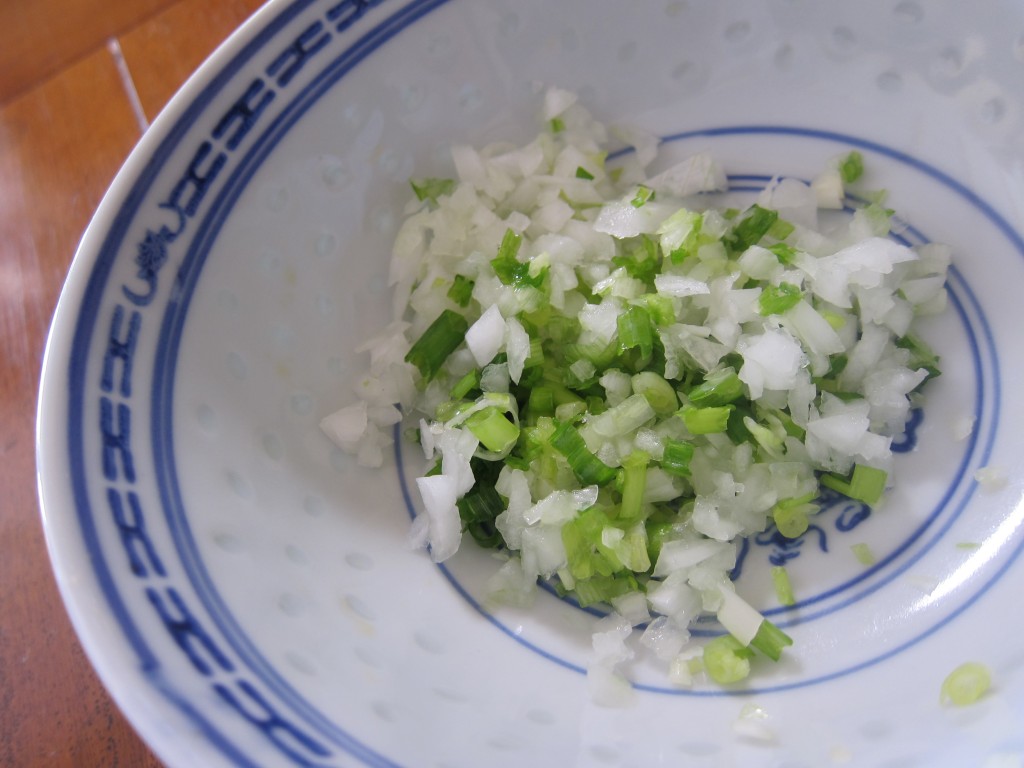 … which you then mix together with mayonnaise and grated cheddar cheese, the stronger the better so it stands up well to the onions. You can also add chopped chives and salt and pepper to taste at this point. Once that’s nicely mixed, just spread it on bread… 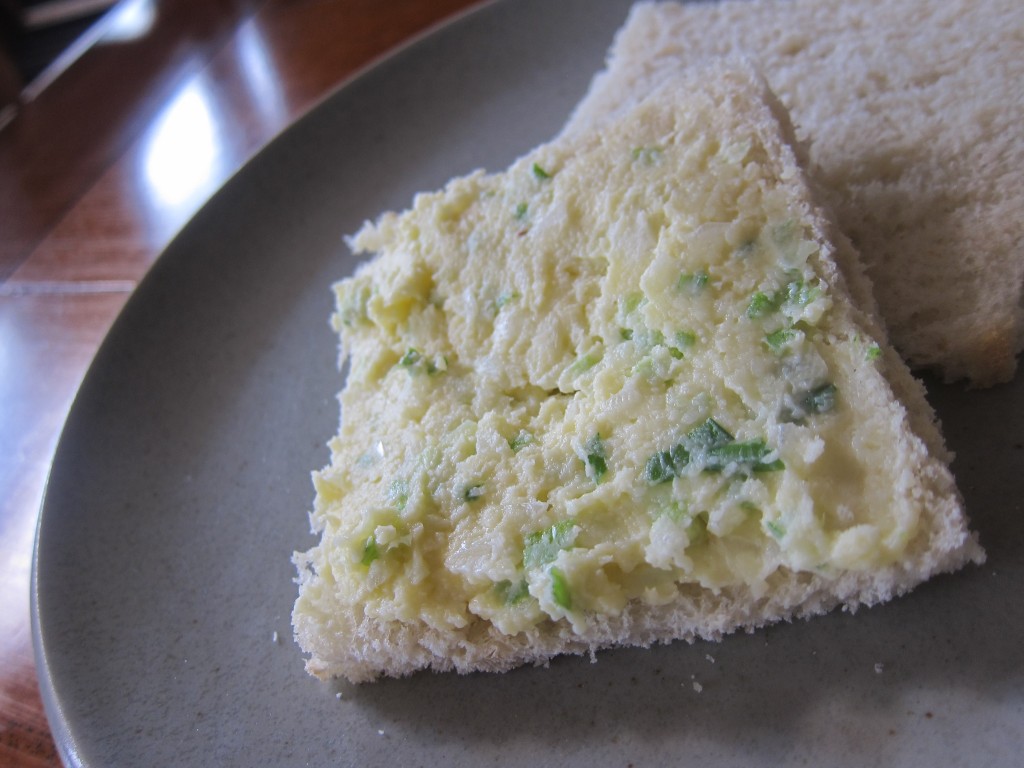 Because I wanted to class up this sarnie a bit, I cut off the crusts and sliced the sandwich up into little fingers. And boy were they delicious with a strong cup of milky Assam tea.

With its very intense — and lingering — flavors, blending raw onions and sharp cheddar, this would not be a sarnie best eaten before a meeting or first date. But for any regular lunch or high tea, it’s certainly a winner. I think the Earl of Sandwich would approve.

Grate the cheese. Combine in a bowl with the onions and mayonnaise. Add salt and pepper to taste.

Spread the mixture between slices of buttered bread.