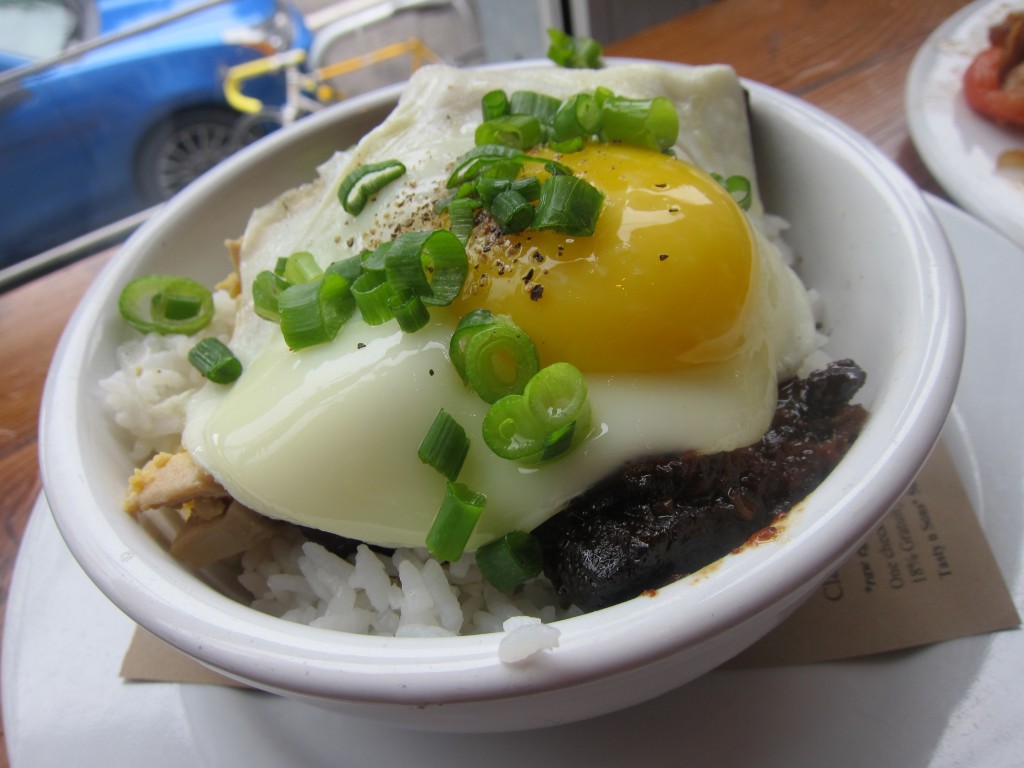 Perhaps you have noticed that it’s been a little quiet on this blog recently. The igvoiding (a word my sister loves) hasn’t been intentional, I assure you.

Travels for A Tiger in the Kitchen have taken me around the country and across several oceans in recent months. And when I haven’t been on a plane, at an event, prepping for an event or trip or simply recuperating from jet lag, I’ve been taking it (relatively) easy. I’ve rediscovered the pleasure of slowly reading a book — two I recently finished and can’t recommend highly enough: the elegantly written and enchanting “The Manual of Detection” by Jedediah Berry and “Three Junes” by the charming Julia Glass, which I dearly loved and also won the National Book Award for fiction in 2002.

As you might imagine, I have also been eating — very well, in fact. And one of the highlights occurred in Portland, Ore., when a break in the Wordstock Festival gave me a chance to visit a brunch spot friends had been raving about for months: Tasty n Sons.

When even stalwart non-food-lovers practically go crazy recommending an eating hole, I generally pay attention. The place must be doing something very right in order to excite the generally unexcitable.

Judging from the crowds that were there on a weekday well before the lunch hour, our friends weren’t the only believers. 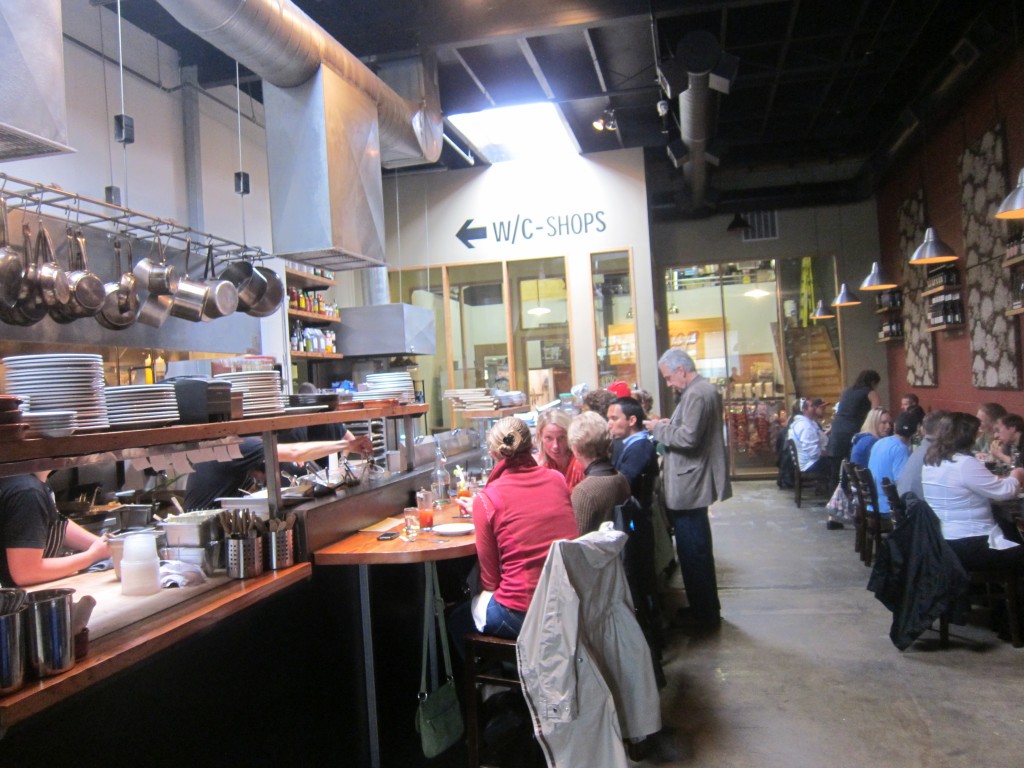 Even the tiny bar was packed with diners — did I mention this was a weekday morning? 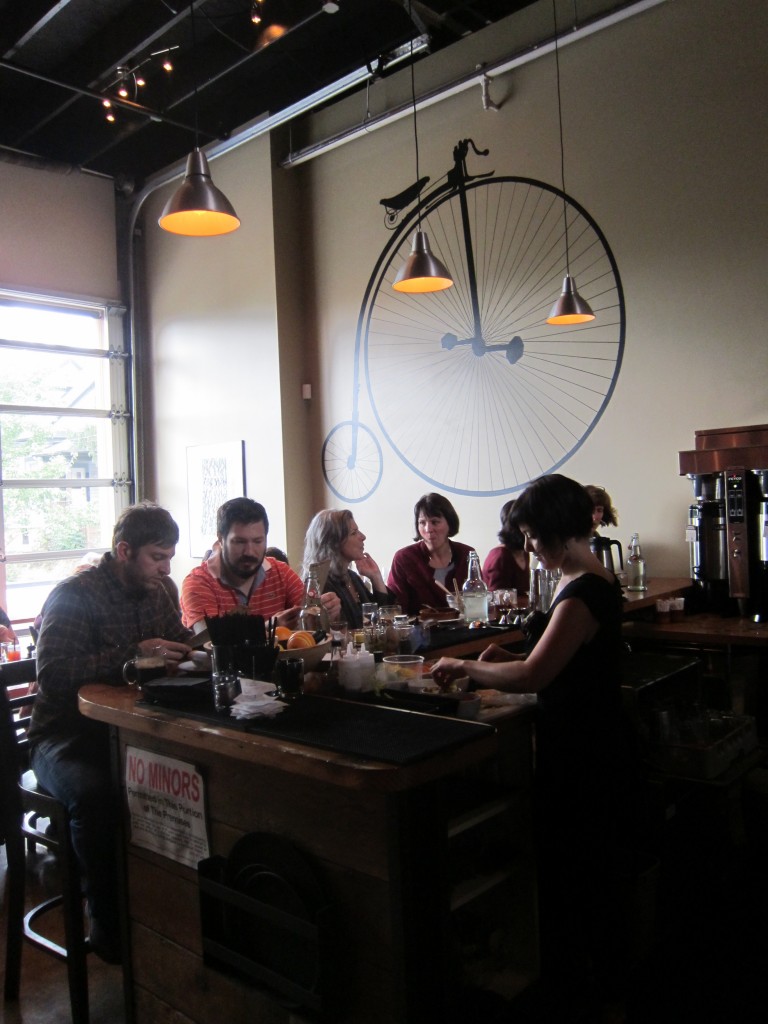 One of the first things you’ll see when you walk in is a large board noting where the day’s ingredients are from. I will admit to having a soft spot for places that do that to such great detail.

Who wouldn’t want to know that the meat on their plate that day hails from a place called “Singing Pig Farms?” 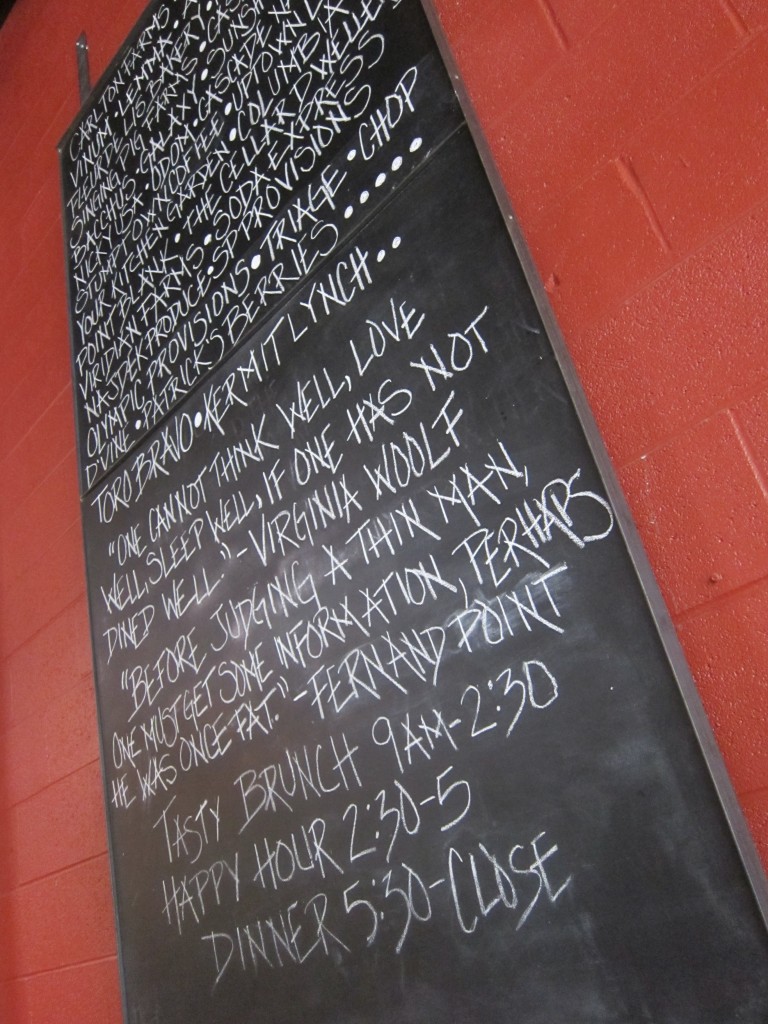 Our start was promising: chocolate-potato donuts ($1.50 each) served in a pool of creme anglaise — these were sheer perfection. The donut struck just the right balance between dense and fluffy with a nice crunch in the coating. 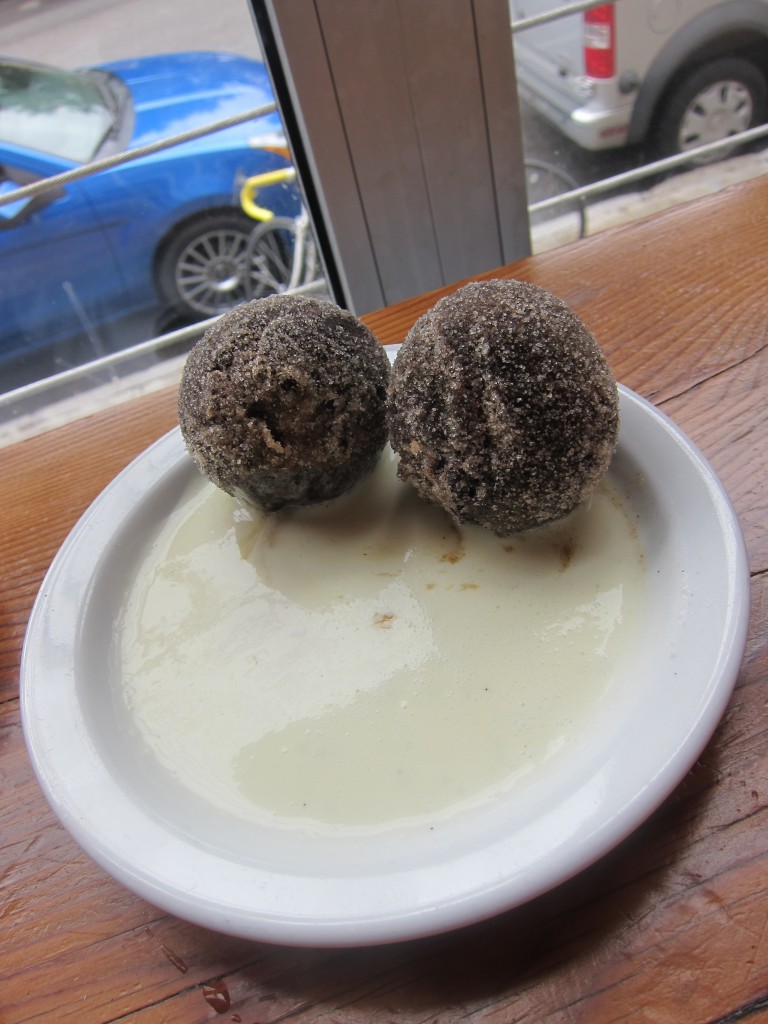 The Moroccan chicken hash with harissa cream and an over-easy egg ($10) was good, though less exciting — the hash itself wasn’t as flavorful as we’d imagined. And the large glob of cream — flavored with harissa, a Tunisian chili sauce — felt like just a little too much and slightly too heavy a finish. But it wasn’t bad overall. Because the Sous Chef is a pancake monster, a side of the cornmeal pancake (typically served with the steak with jalapeño butter) was a must. This came in a searing-hot cast-iron skillet — we quickly figured out that we should eat it quickly as the pancake was continuing to cook as it sat there. The bits that weren’t too crunchy were terrific. 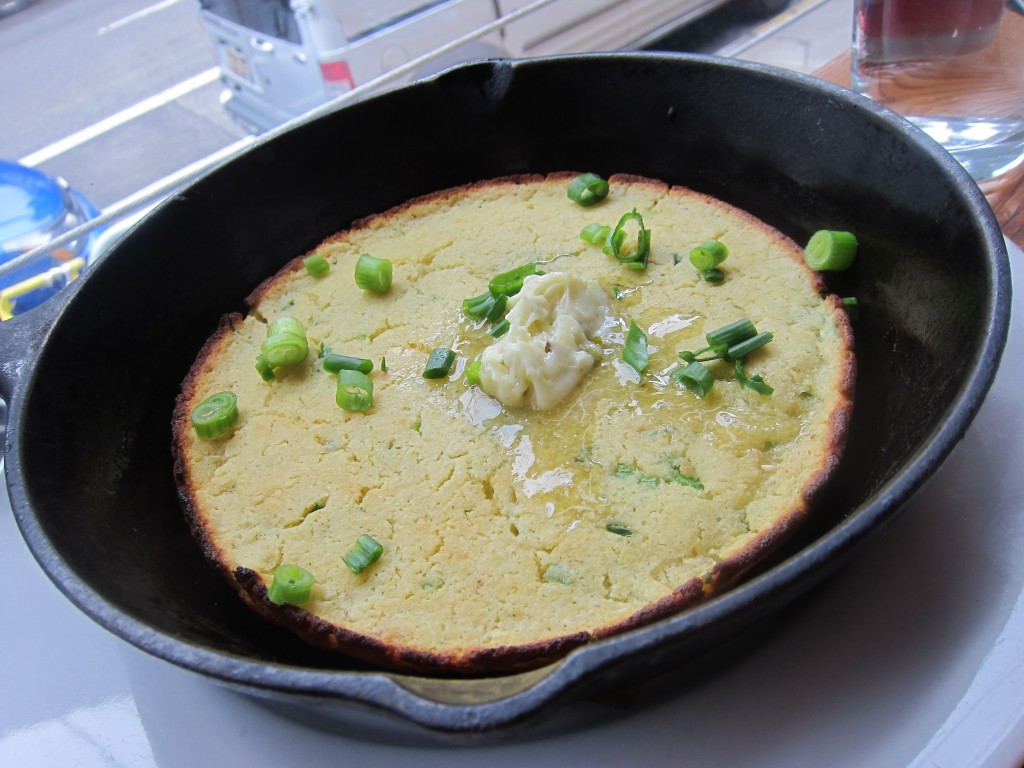 The dish that made us dearly wish we lived near enough to Tasty n Sons to come back every weekend, however, was the Burmese red pork stew over rice and eggs two ways ($9).

The pork was braised to falling-apart perfection and the eggs were phenomenal — Egg #1 was the runny soft-cooked egg that sent a cascade of yolk seeping through the rice crannies. Egg #2 turned out to be less usual: a hard-boiled egg, cooked in a soy-sauce and anise combination, that gave the dish yet another layer of flavors. 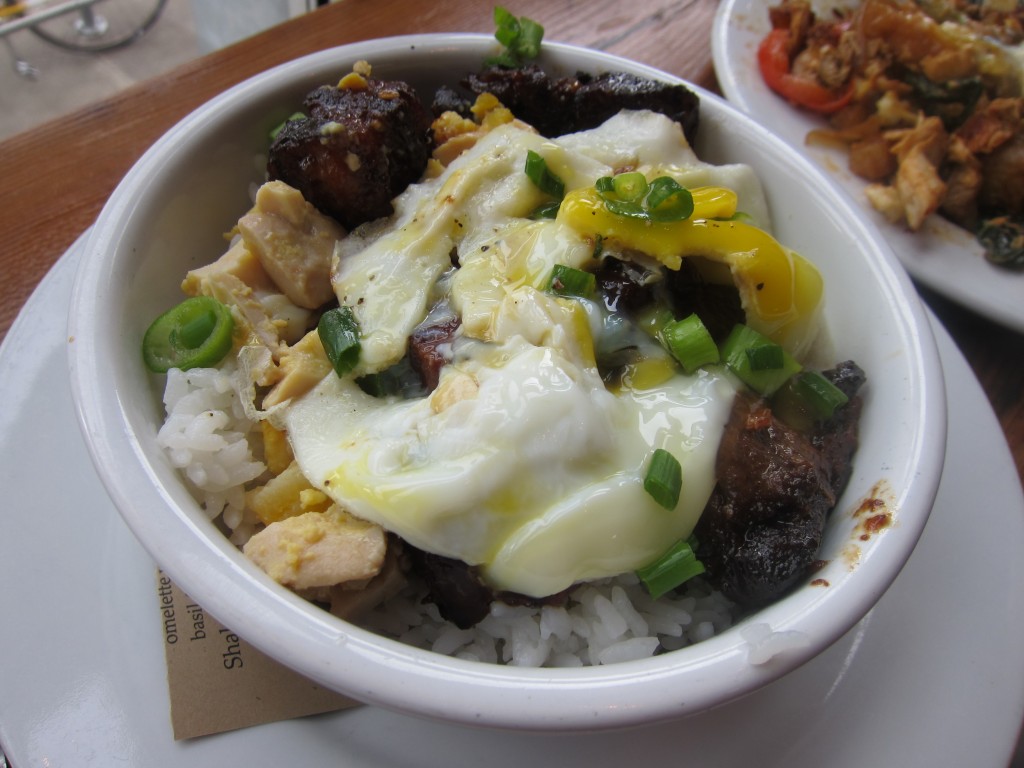 The menu at Tasty n Sons offered many many more dishes we dearly wish we had room (and time) for — polenta and sausage ragu with mozzarella and a fried egg; roasted apple with bacon lardons and cheddar.

Portland, it may be a while before we’re back on your soil again. But we already know where we’re going the moment we land.