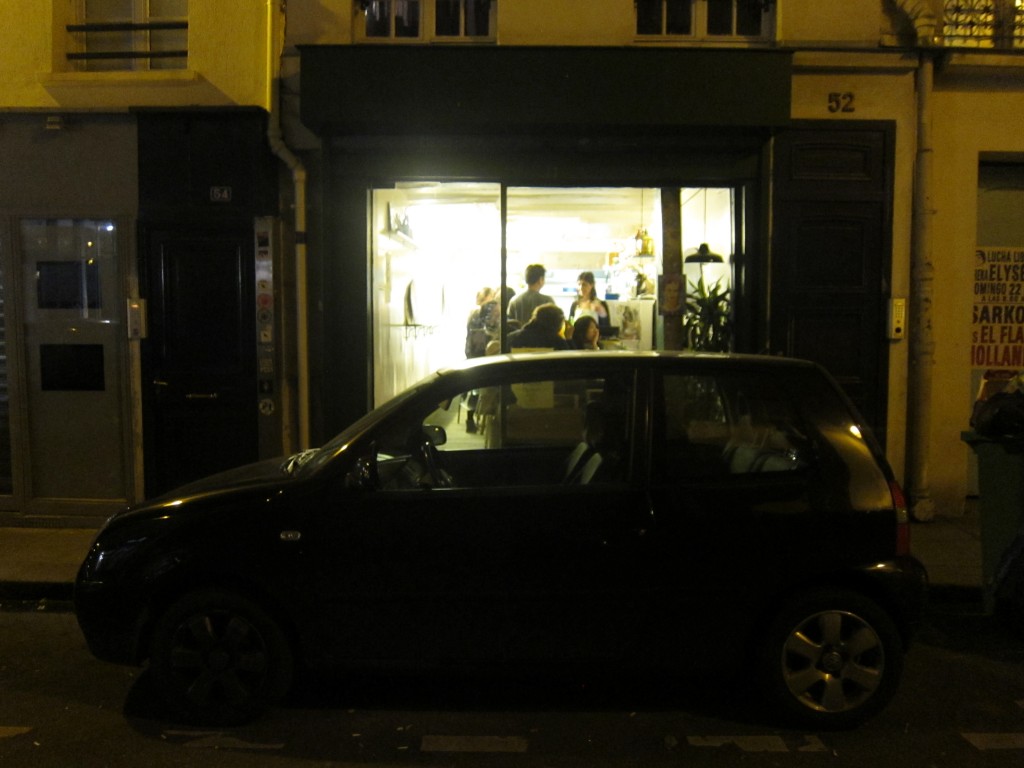 The gastronomic Paris in my mind is a swirl of glistening pastries, heady fromages and smoky bistros serving up heaping platters of seared steaks and frites.

It is most certainly not tacos. Not until recently, anyhow.

When a Parisian whose appetite you trust tells you that a certain taqueria is a must even if a visit there is going to take up a valuable dinner spot on a far-too-short trip, I figured it’s good to listen.

Which is how a little group of us hailing from Singapore, New York and a few points in between found ourselves tiptoeing along a dark and silent street in the Marais on a Sunday night, in search of good tacos ….

My first view of Candelaria was confusing — my friend Kevyn the Parisian had noted its outstanding cocktails and warm loungy setting when talking up the place. So when we walked into a fluorescent-lit taco joint, I was surprised. 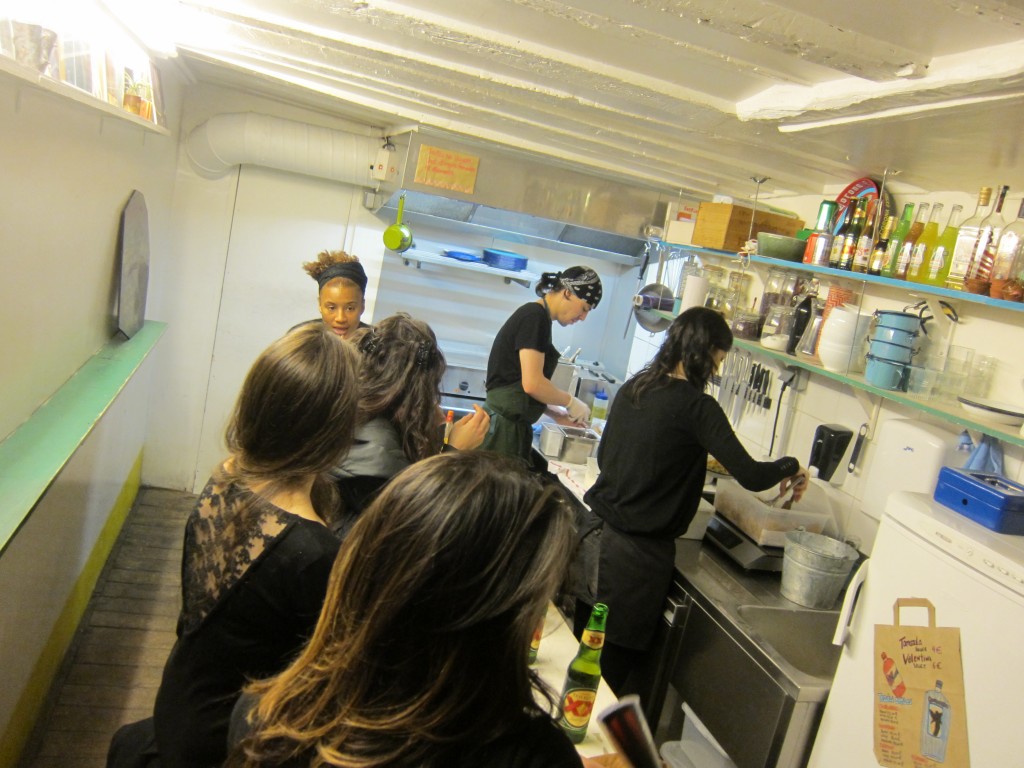 But if you’ve been to any of the speakeasies or secret dinner spots that now dot New York City, you’ll know that there’s always more than meets the eye. So when Kevyn inched past the crowded taco bar and made his way to an unmarked back door, we were curious.

As the door swung open, we stepped into a cool darkness, punctuated with warm spots of candlelight.

Now this was the place we’d been looking for. 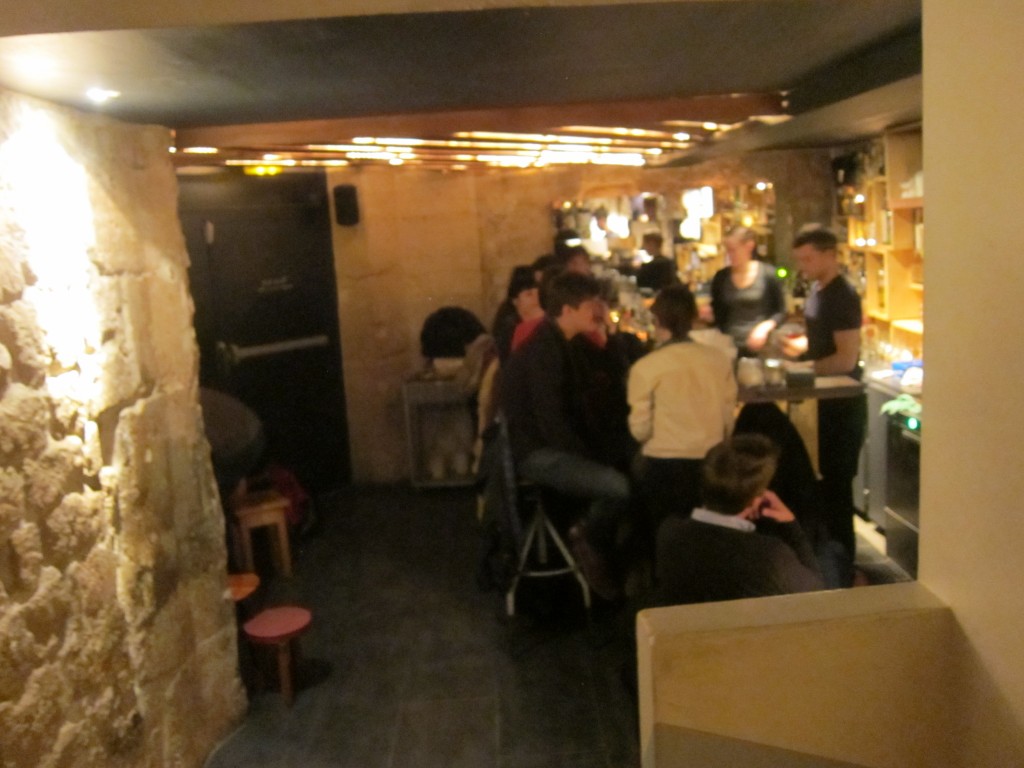 We began with cocktails, of which there were many choices (all priced between 11 and 12 Euros).

A deliciously light Velvet Beat combined spiced rum with falernum (the Caribbean sweet syrup with almond, clove and other flavorings) and lime. Gimlets came spiked with ginger and a bright-red Ruby Tuesday that combined cynar and St. Germain with housemade beet juice proved a big hit. (My favorite of the night, however, was the refreshing La Guepe Verte, which combined pimente-infused tequila with cucumber, lime, coriander and agave.)

Man cannot live on cocktails alone, however — and before too long, we were getting peckish.

The system is simple here — for food, you go back out into the bright taco joint and place your order. 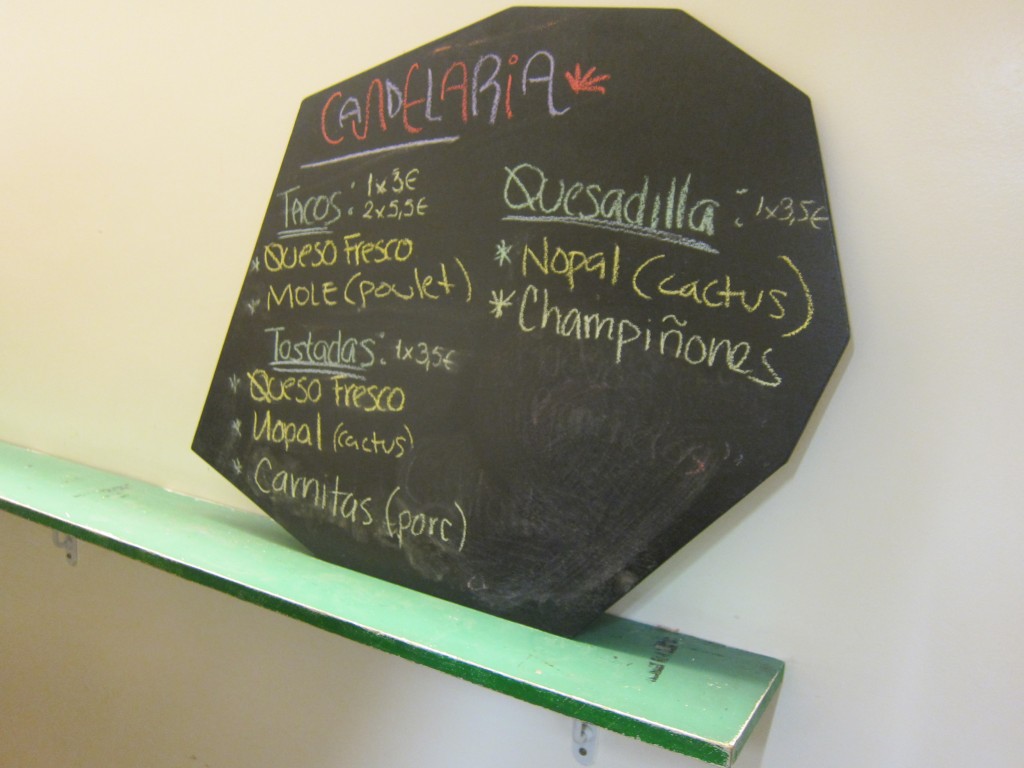 You can either have them deliver your food or stick around and watch them make it. Now, having closely watched many a taco operation in New York and California, I could see (and smell) that this was going to be good.

(It turns out that the chef is from Mexico City — a reason for its authenticity.) 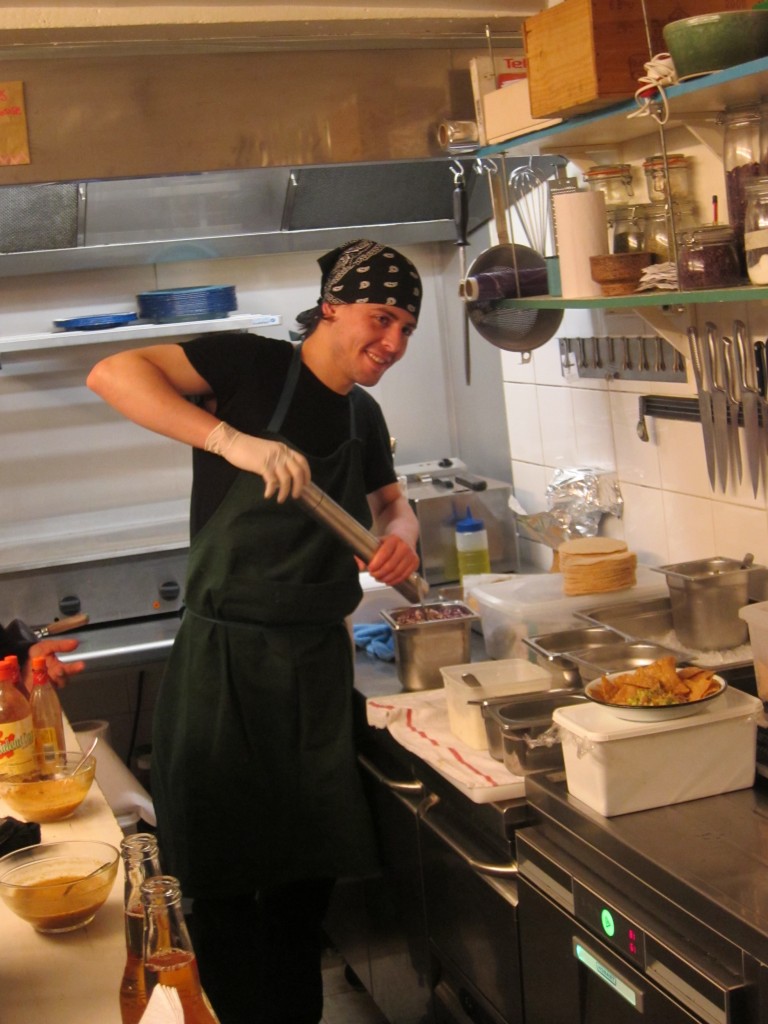 But being a spectator can be a little dangerous — I wanted to eat pretty much everything I saw them make. 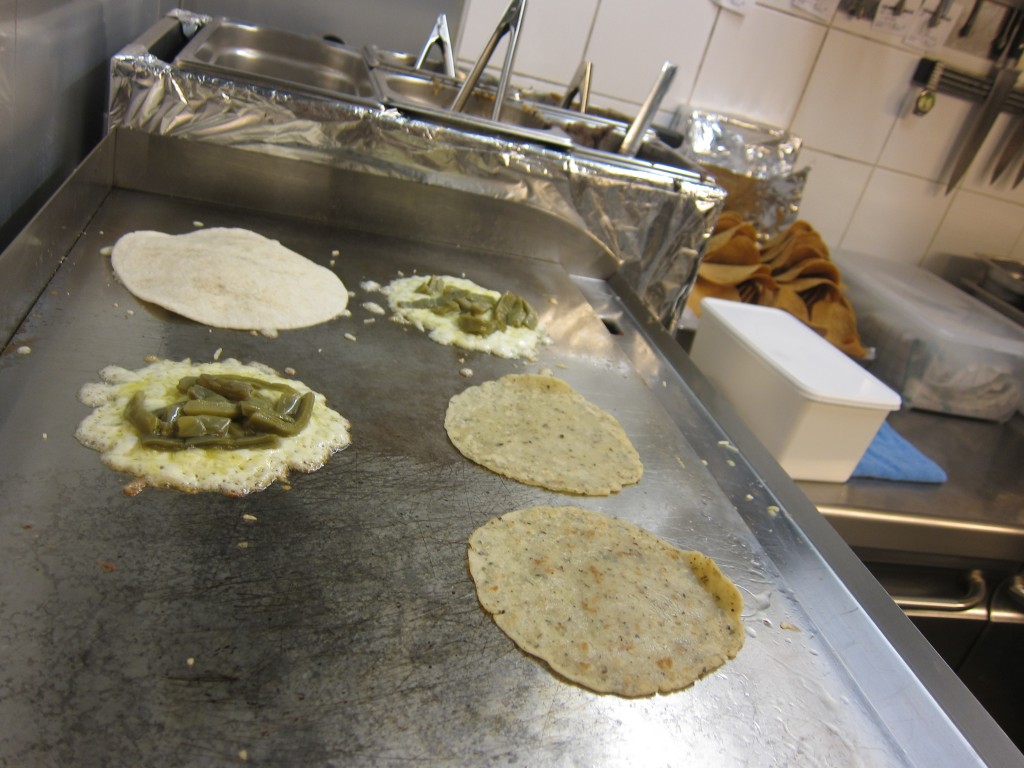 Food prep doesn’t take long — so before you know it, you’re collecting your spoils and heading back.

We began with an order of chips and guacamole — the chips were super crunchy, exploding into a dozen little bits in your mouth at first bite. And the guac, a little chunky and with a nice sharp zing, was a lovely foil to our cocktails. 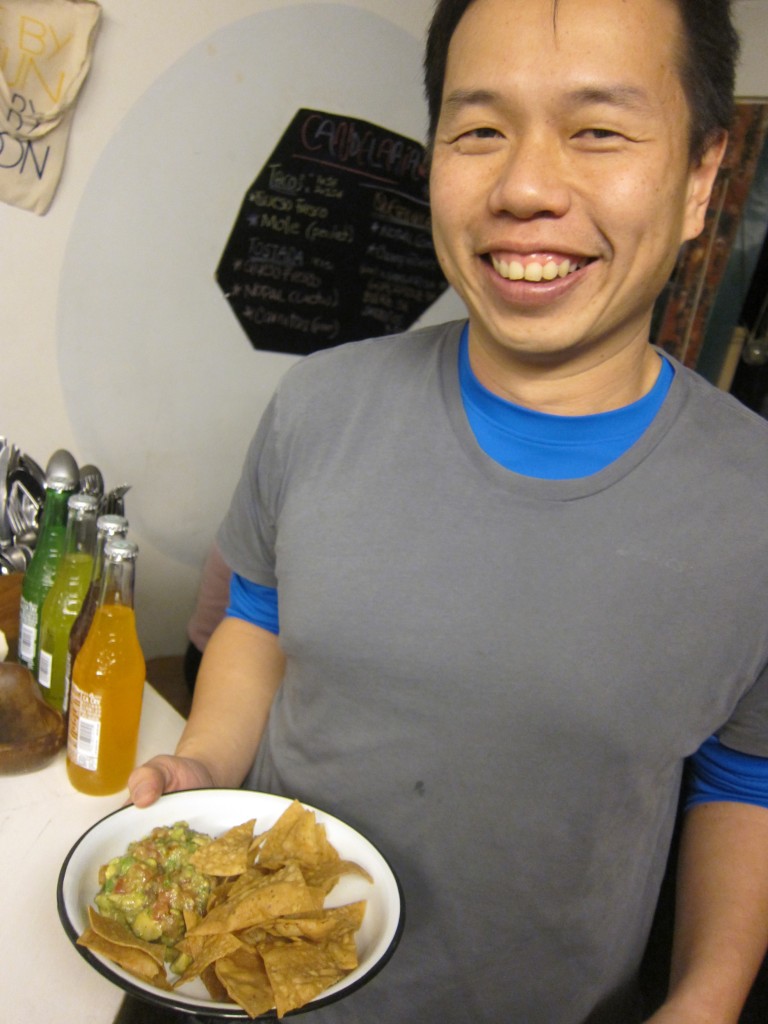 Next up were quesadillas, which my friends inhaled with no complaint. (I wish I had more to say on this front but I didn’t have a chance to have a bite, alas. Did I mention we were peckish? This food pretty much disappeared the moment it arrived at our table.) 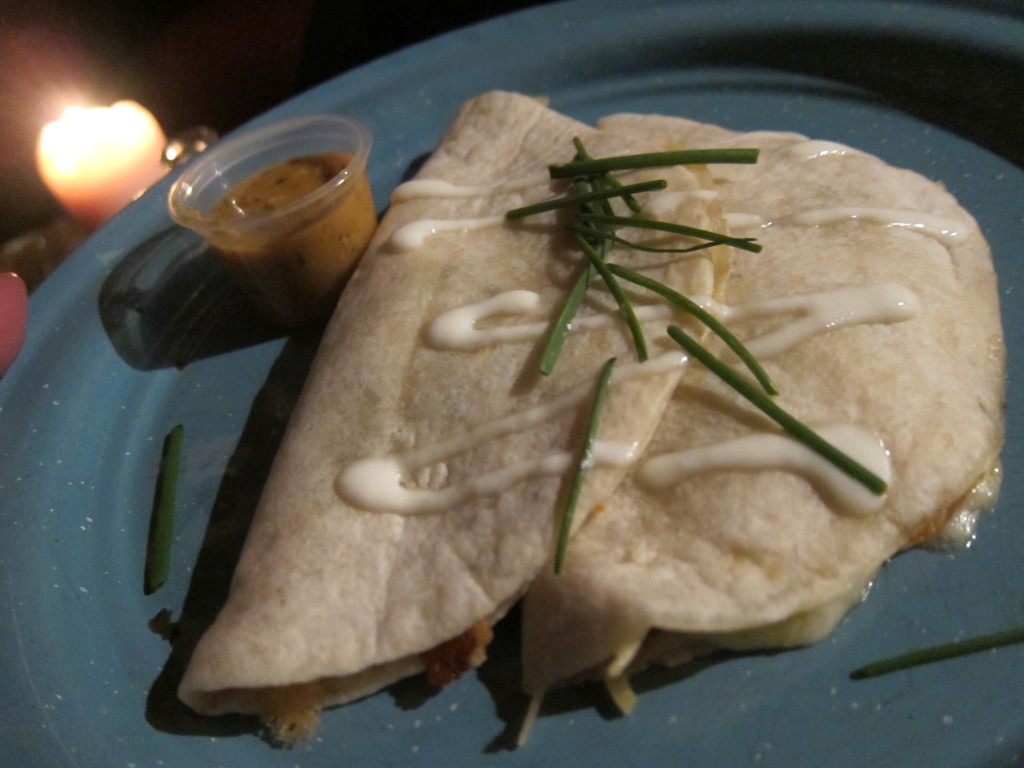 I can, however, testify to the awesomeness of the mole tacos — these were true heaven in three bites. The filling was incredibly tender, moist and packed with flavor. The moment I finished mine, I desperately wanted another. 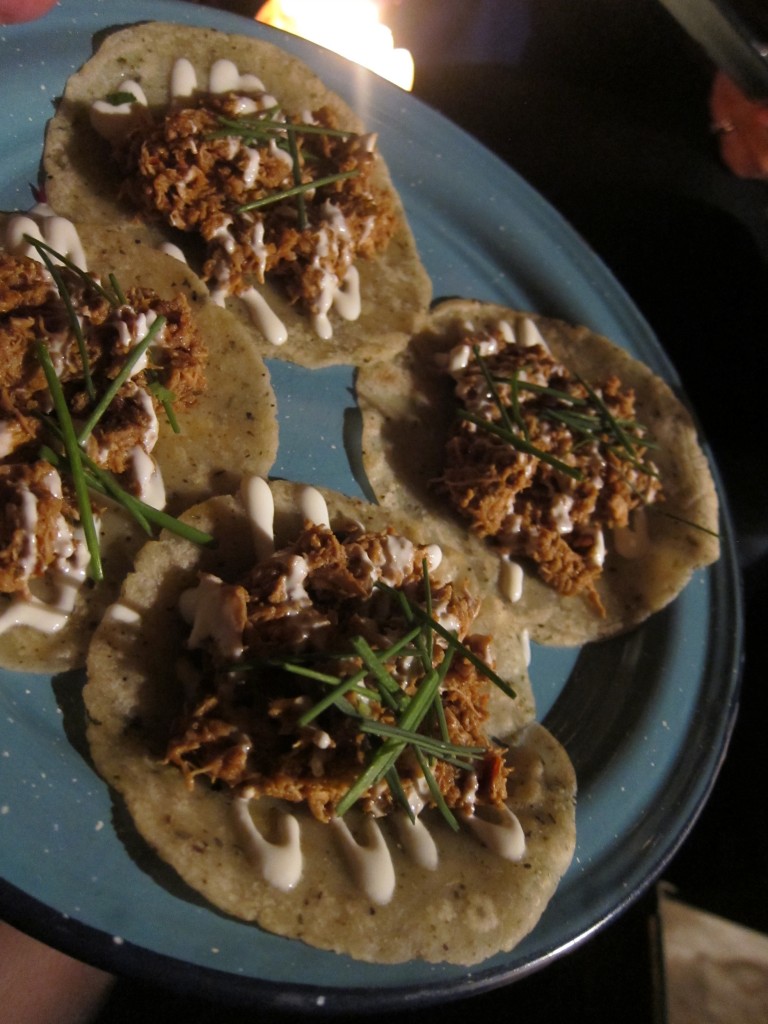 For a clean finish, I had a queso fresco tostada — its base, again, was wonderfully crunchy, with a slightly deep and nutty flavor. And its topping of chopped greens and onions packed with cheese was a nice palate cleanser.

Was this a meal I had expected to have in Paris? Certainly not — why eat Mexican when I can get the good stuff back home in New York City, after all?

But good food is good food. And that’s more than enough for me.