What is your working title of your book (or story)?

I have two major projects on my plate right now. I’m editing my first fiction anthology — Singapore Noir, a collection of short stories set in Singapore that Akashic Books is publishing in Spring 2014. And I’m also working on my first novel — a story that clobbers my heart, makes me laugh (sometimes) and is the thing that nudges me to throw off the covers each morning so I can start my writing day. I can’t wait to share more about this novel when I can.

Where did the idea come from for the book?

Since I can’t discuss the novel yet, I’ll talk about Singapore Noir. I had long known of Akashic’s Noir prize-winning series — Dennis Lehane edited Boston Noir, Laura Lippman edited Baltimore Noir and here I am with author Kenneth Slawenski at the November 2011 launch of New Jersey Noir, edited by Joyce Carol Oates and featuring a fabulous story by the dashing Jonathan Santlofer (also pictured). 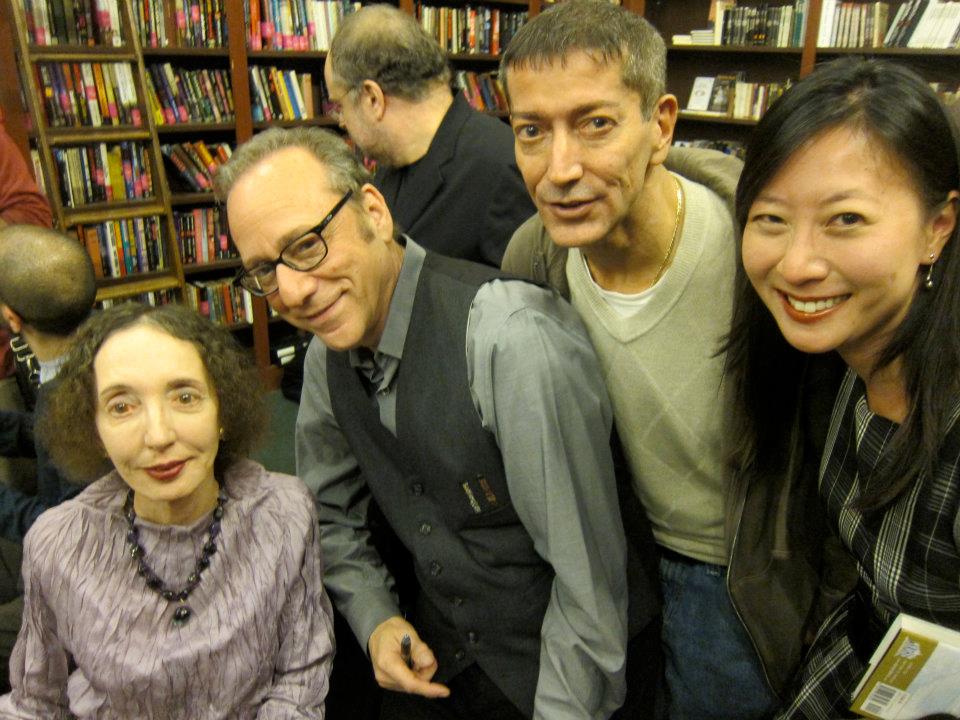 The very week after this photo was taken, I flew south to speak at the Miami Book Fair, where I found myself having cocktails with the awesome S.J. Rozan, who has written 12 novels and edited Bronx Noir. S.J. introduced me to the tall man next to her — Johnny Temple, head of Akashic — at which point I asked the question I’d been pondering: Why isn’t there a Singapore Noir?

Johnny’s answer was immediate: “Because I don’t know any writers from Singapore.”

And that’s how Singapore Noir was born.

What genre does your book fall under?

Singapore Noir features very dark fiction from a country that many think of as clean, rigid and perhaps even a little boring. It’s true that Singapore is a bastion of modernity with very strict rules — you’ll probably remember the American kid who got sentenced to a caning in the 1990s for tagging cars with graffiti. But it’s also a densely packed city with a seamy side — one that will likely shock you as you wade through Singapore Noir.

Which actors would you choose to play your characters in a movie rendition?

I adore the gorgeous Maggie Q of Nikita, who sent me a sweet note after A Tiger in the Kitchen was published. So if any of the stories are turned into a film, I would hope that Maggie stars in it somehow!

What is the one-sentence synopsis of your book?

Gritty dark tales from the disturbing and deep underbelly of a seemingly pristine country.

Will your book be self-published or represented by an agency?

My amazing agent Jin Auh sold it to Akashic.

How long did it take you to write the first draft of your manuscript?

The manuscript is still in the works — more than a month ahead of deadline, however, I already have five of the 14 stories in and I’m thrilled to start reading them.

What other books would you compare this story to within your genre?

Certainly any of the other terrific books in Akashic’s Noir series but I’m hoping that this book will shed light on the intimate folkways of a lesser-known country much the way Haruki Murakami’s collections have shared Japan with us or Flannery O’Connor’s stories have shown us the Deep South.

Who or what inspired you to write this book?

As a native of Singapore, I’ve long been frustrated with the one-dimensional view that many have of the country. In the 20 years that I’ve lived in the United States, when I’ve mentioned Singapore, people have typically brought up caning and Draconian laws or asked whether it’s true that chewing gum is banned.

Having grown up in Singapore — and also having gotten to know it better in my repeated visits for research for Tiger and now the novel — I know the place is so much more complex. We have whole neighborhoods filled with streetwalkers, fatal machete attacks in public squares, a sad recent epidemic of suicides by train.

I hope Singapore Noir will delve into the darker side of my country, which the world largely hasn’t seen. And yes, I’ll have a story in it, too.

What else about your book might pique the reader’s interest?

Many of the authors of stories for Singapore Noir have never been published outside of Singapore. And these are some of the region’s best writers — four of them, for example, have won the Singapore Literature Prize, which is the country’s equivalent of the Pulitzer Prize in the U.S.

Ovidia Yu, one of Singapore’s leading playwrights, just turned in her evocative piece. You’ll also hear from prizewinners Suchen Christine Lim, Philip Jeyaratnam, Simon Tay and Colin Cheong. And also Johann S. Lee — author of Peculiar Chris, Singapore’s first gay-themed novel — who is an inspiration for many in a country in which homosexual sex remains illegal.

Additionally, some incredible international writers have signed on to write pieces as well — the list includes Jeet Thayil, whose lyrical novel Narcopolis was shortlisted for the Booker last year, and Lawrence Osborne, whose latest novel The Forgiven has been earning rave reviews worldwide, just to name a few.

Here’s to sharing Singapore Noir with you in 2014!

And now to tag a few folks. Next up:

Lisa Takeuchi Cullen, a lovely former colleague at Time Inc. not so many moons ago when we were both fulltime journalists. Her first novel Pastors’ Wives comes out in April and she just sold her first drama pilot, The Ordained, to CBS. And…

Gordon Dahlquist, a playwright and novelist who is my trusted reader of first drafts and very dear friend. Gordon wrote the terrific The Glass Books of the Dream Eaters fantasy trilogy and his first young adult novel The Different Girl comes out February 21. And…

James Iver Mattson, screenwriter (Deliver Us From Eva) and incredible copper artist, whose first middle-grade book — co-written with Barbara Brauner — comes out in May. The Glitter Trap is the first of four in their Oh My Godmother series. Very exciting! And…

Nova Ren Suma, the super sweet young adult author extraordinaire of Imaginary Girls and Fade Out,  whose third novel 17 & Gone comes out in March. And…

Neal Thompson, one of my favorite people and former colleagues who’s written three books. His fourth — A Curious Man: The Strange and Brilliant Life of Robert “Believe It or Not!” Ripley — comes out in May. And…

Joe Yonan, fabulous food editor at The Washington Post, Let’s Lunch friend and author of the terrific cookbook Serve Yourself: Nightly Adventures in Cooking For One. Joe’s second book Eat Your Vegetables: Bold Recipes For The Single Cook comes out in August.