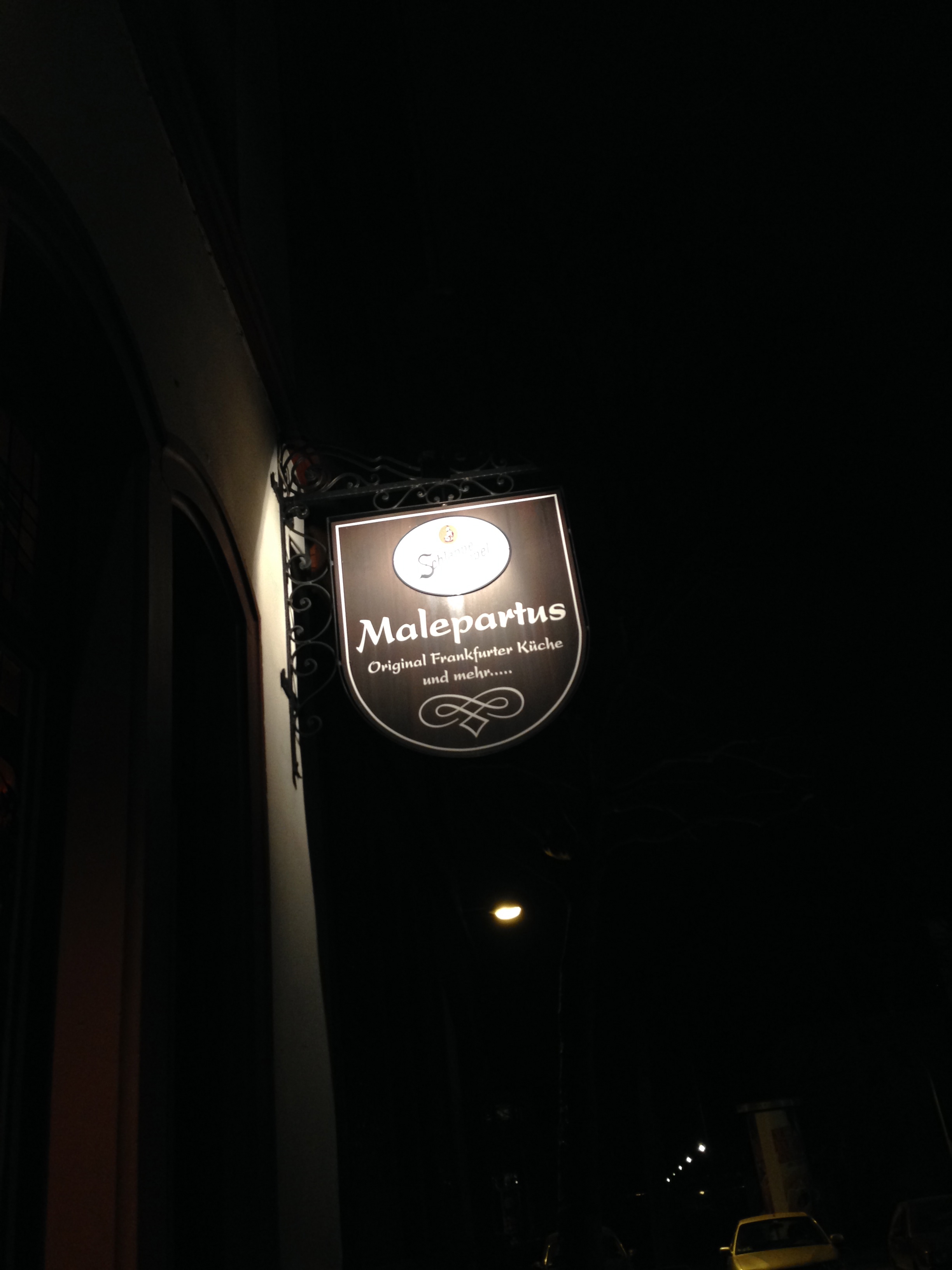 Bornheim appears to be something like the Greenwich Village of Frankfurt. Filled with the young and creative, and a plethora of bars and restaurants that’ll appeal to said crowd, it’s certainly a prime spot to find a good meal.

And so a merry band of us found ourselves wandering the dark streets on a recent night, led by an illustrator who lives in the neighborhood.

A traditional Frankfurt place, she had said. Just simple local food. And suddenly, there we were. 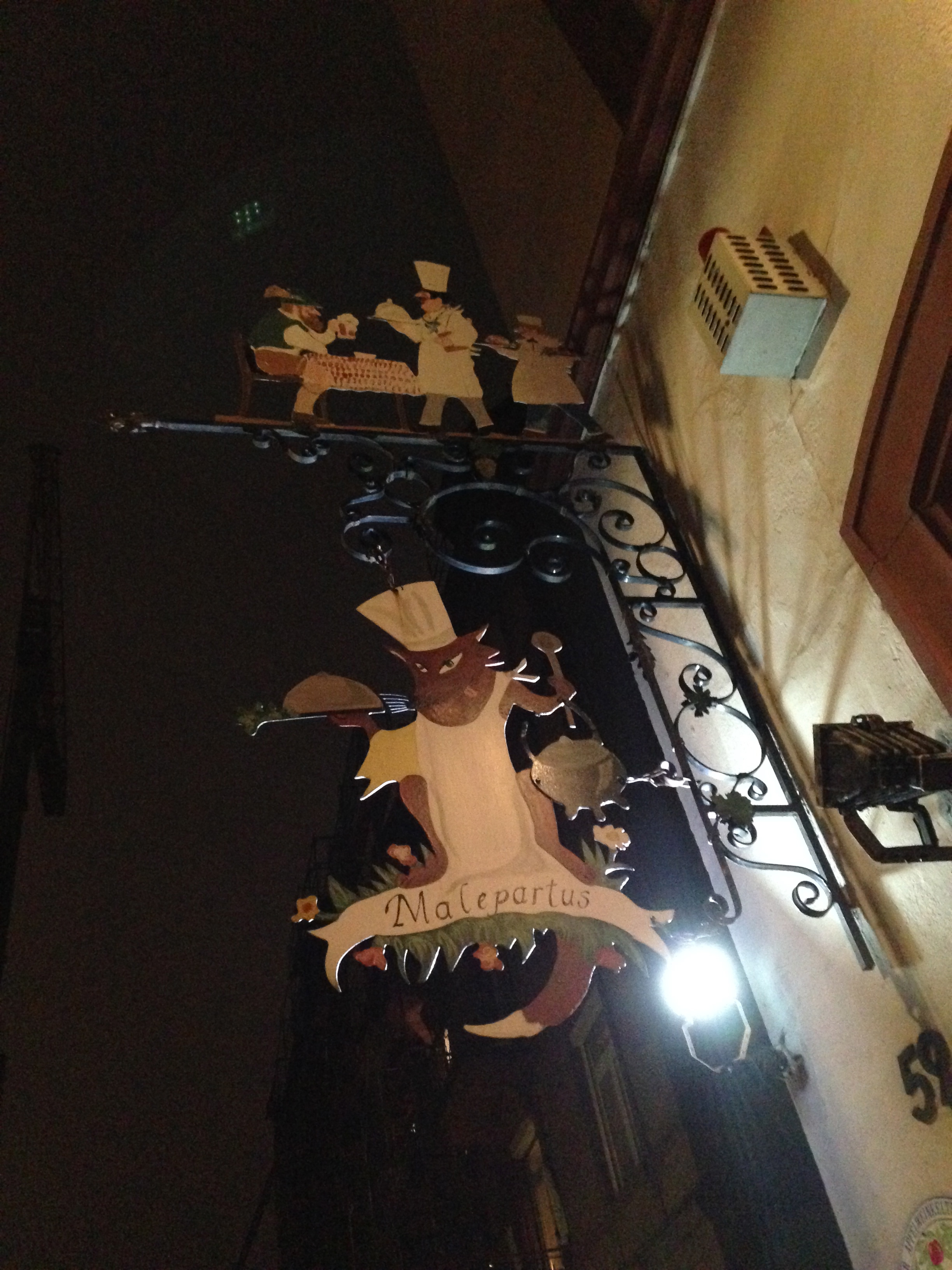 If the sign didn’t intrigue me enough, the door certainly did. (Glass detailing in doors always makes me weak-kneed.) 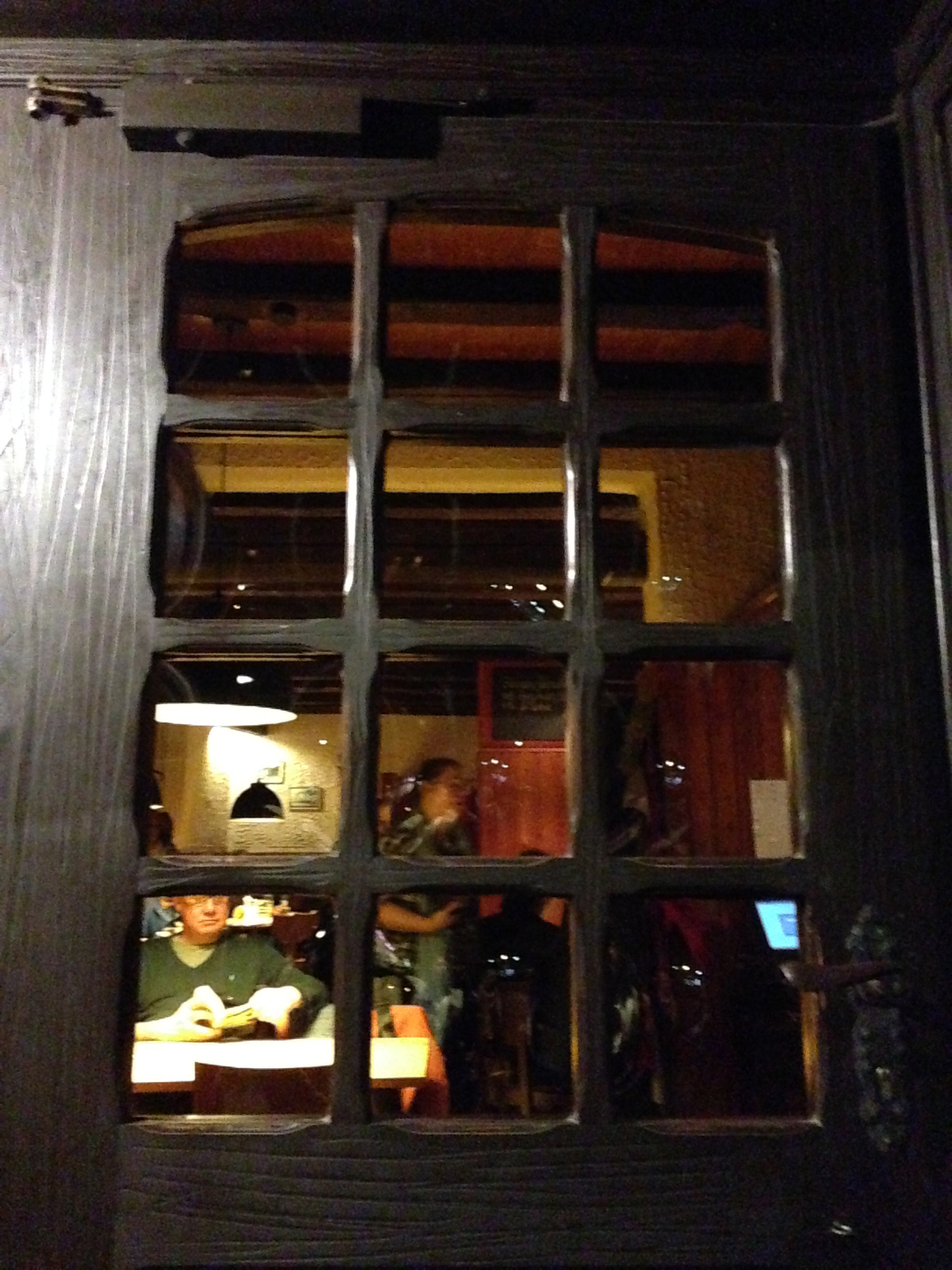 The decor was no nonsense; the crowd (in the other, main, room) fairly rambunctious. 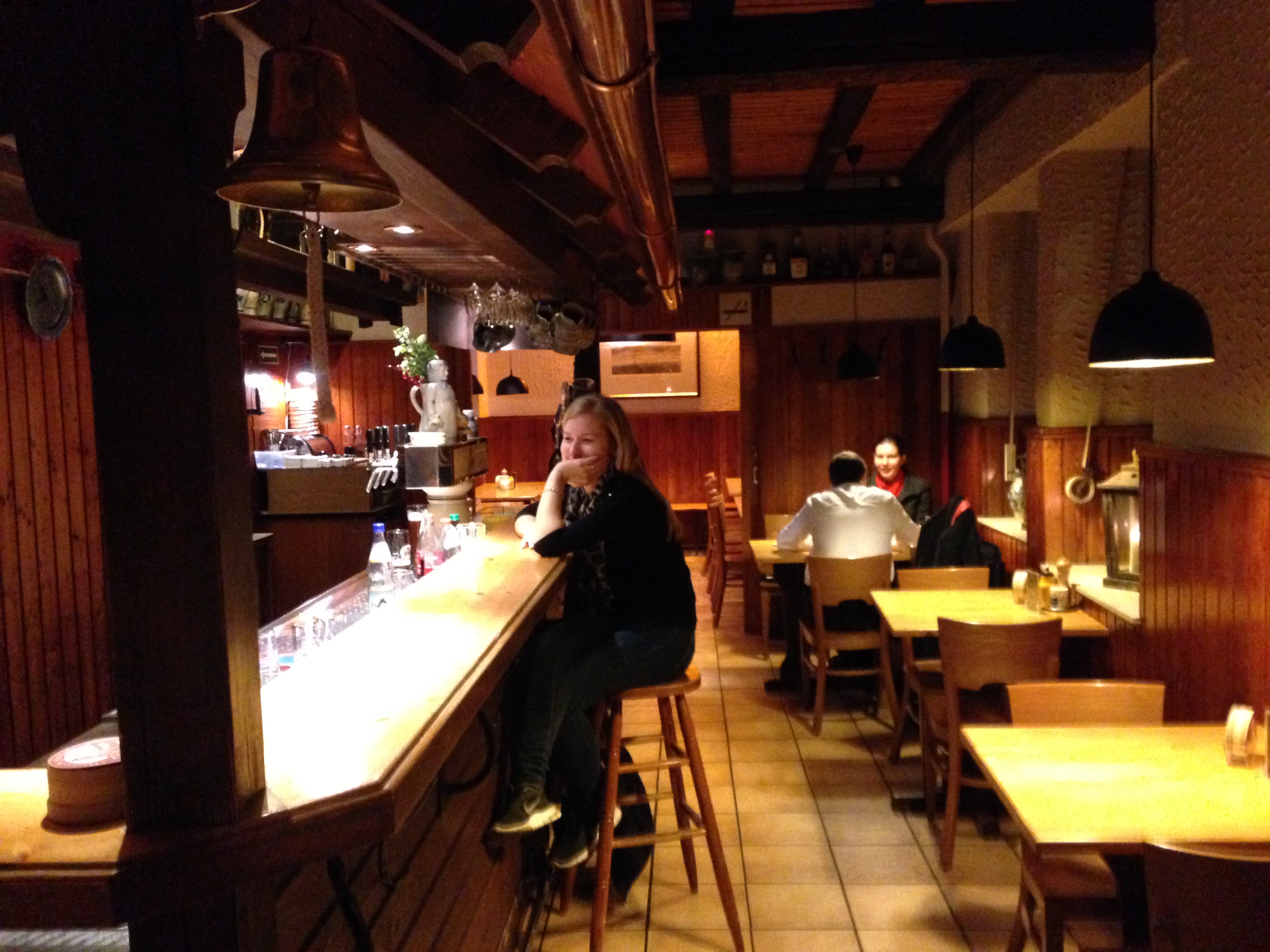 We began with a standard — Handkäse mit Musik (4,20 Euros), a spongey local cheese topped with minced onions marinated in vinegar.

This pungent dish, I was told, doesn’t usually go over well with non-locals. Not this tourist, however. And this rendition was terrific — lovely, tart and tangy, delicious on bread. Our table ended up polishing off two rounds of this dish. 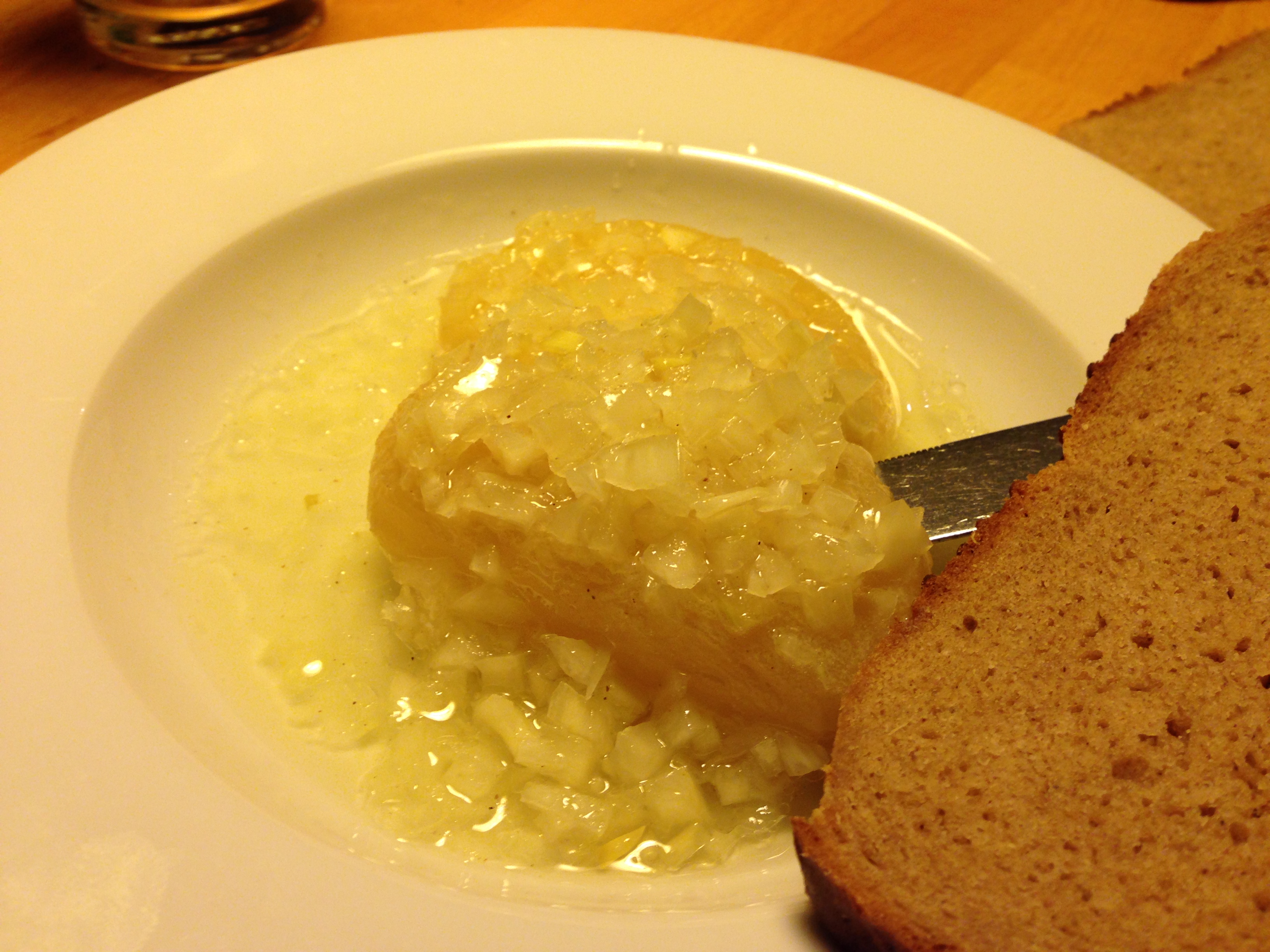 Because one can never have too much cheese, we sampled another local cheese appetizer: Schneegestöber (4,50 E).

This classic Frankfurt dish — which means “snow flurries” — features one of my favorite cheeses, Camembert, which is pureed together with butter, egg, onions and then topped with paprika, pepper and chives.

I don’t think I need to tell you how tasty it was — the ingredients say it all. The consistency, however, was what really got me. It was so airy and whipped it felt like a cheesy cloud on the tongue. 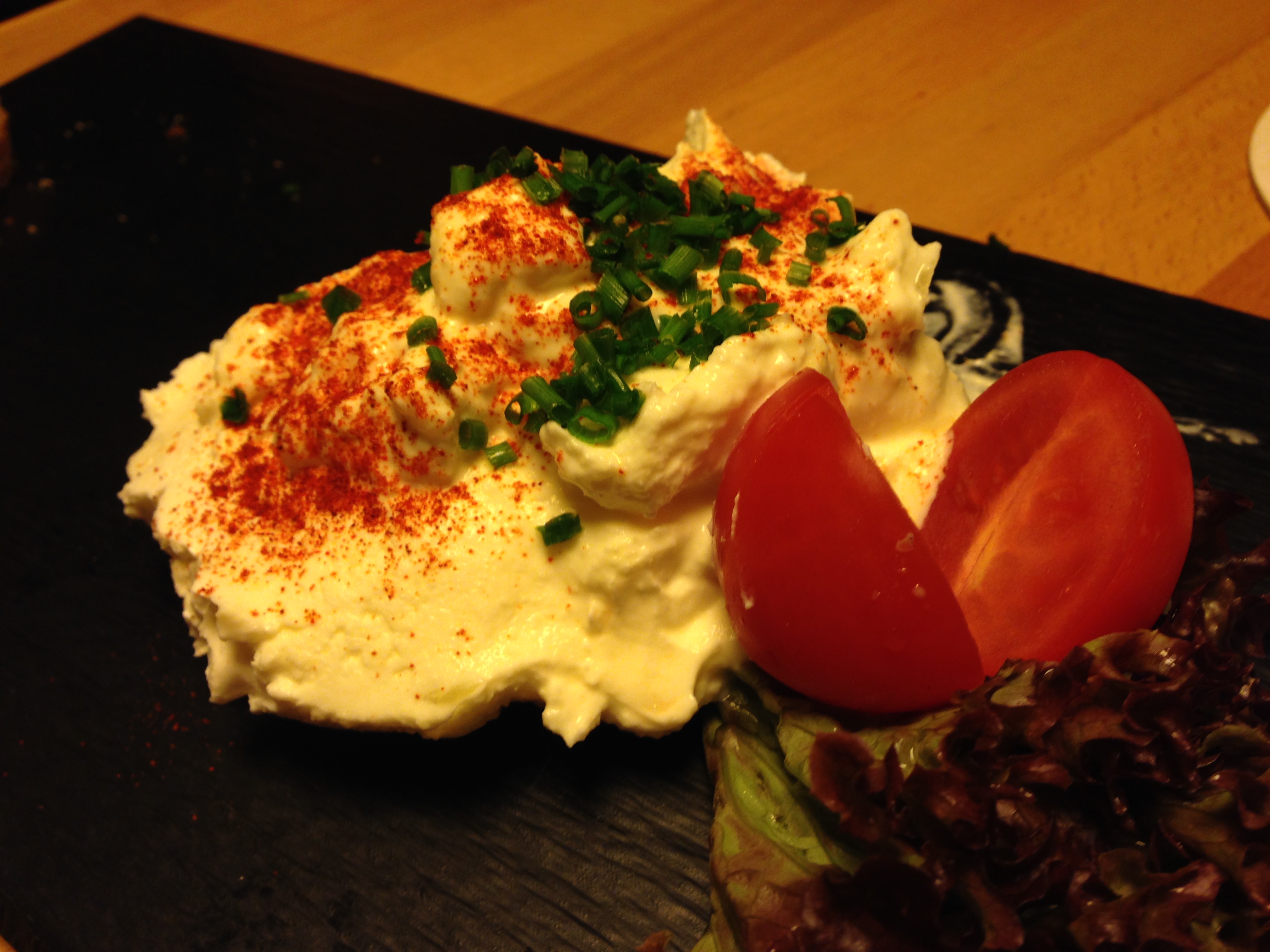 The boys seemed to be of like minds, each getting a grilled chopped steak (11,50 E), which came topped with sauteed onions and beautifully crisp potatoes. Straightforward, good stuff. 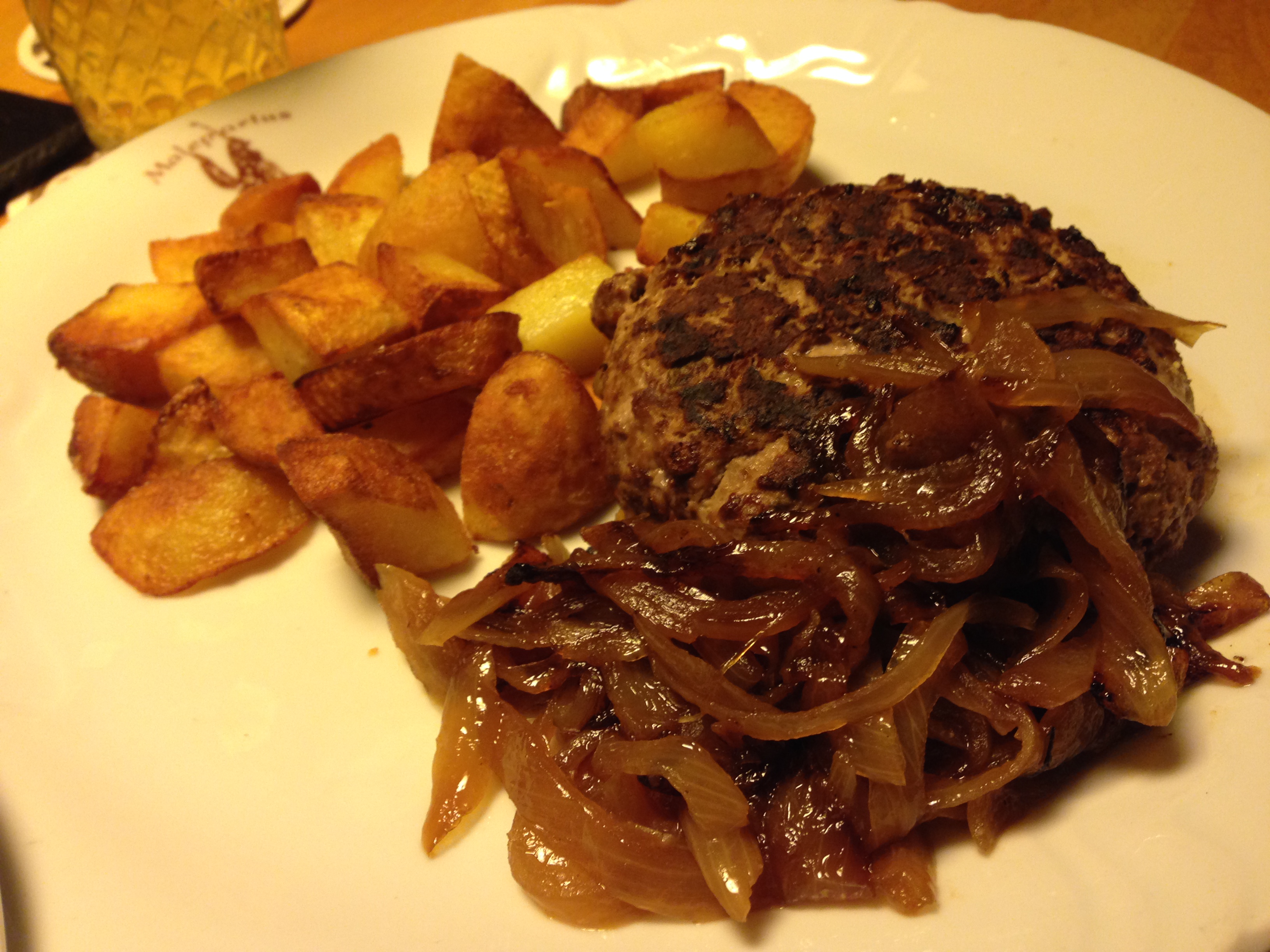 The schnitzel with spätzle (11,80 E) was probably the best deal on the table — I got to this dish too late but trust me when I say that the schnitzel was pretty much the size of the entire plate. And deliciously crisp, too. 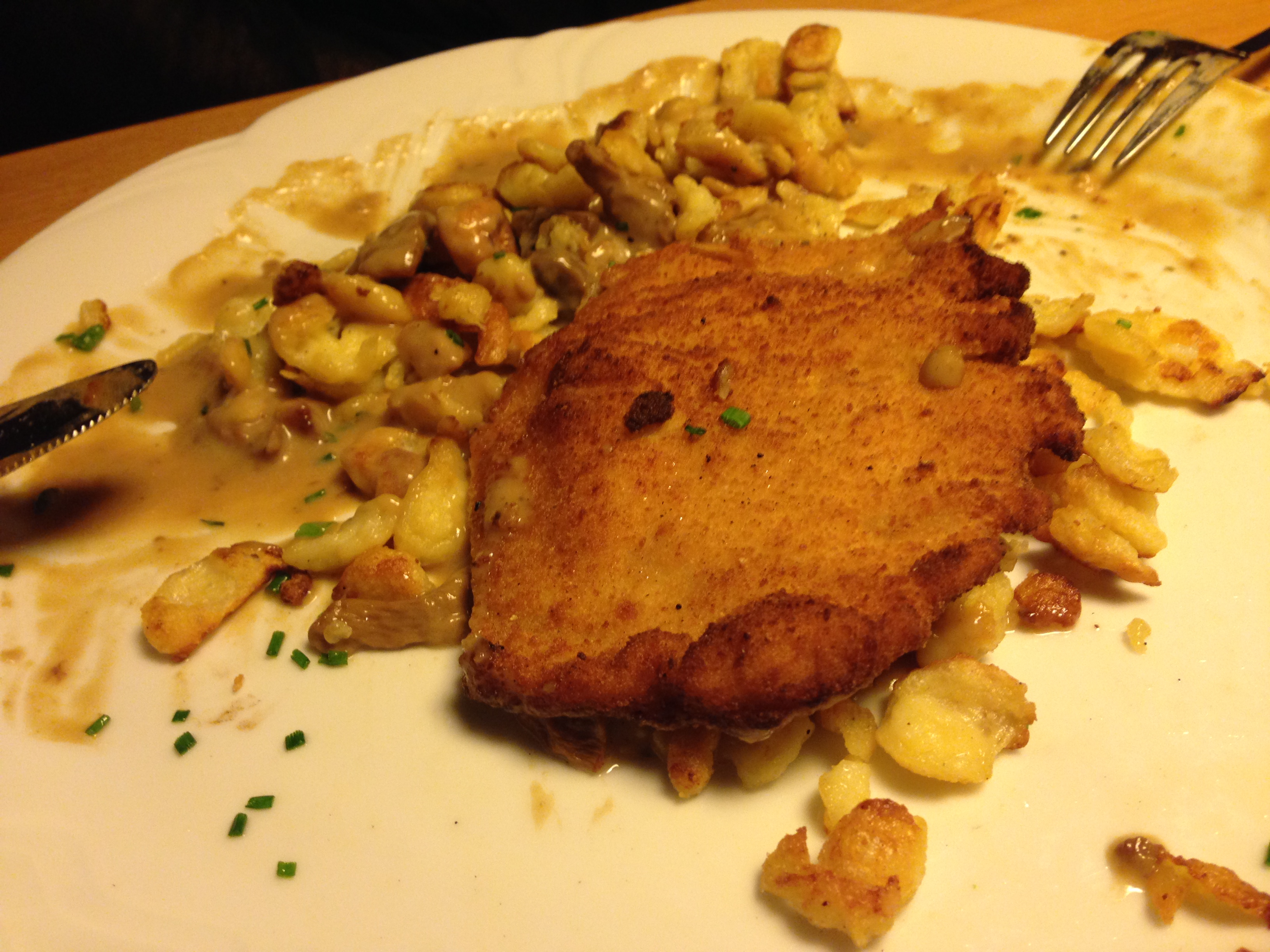 Now, if you’ve read “A Tiger in the Kitchen,” you’re probably aware of my obsession with meatloaf. So when someone explained that Hackbraten (10,50 E) is German meatloaf, I was sold.

And I certainly didn’t regret it. The meatloaf was falling-apart tender, moist and incredibly tasty on its own, though fantastic slathered with earthy mushroom gravy, too. And the mashed potatoes were buttered perfection. 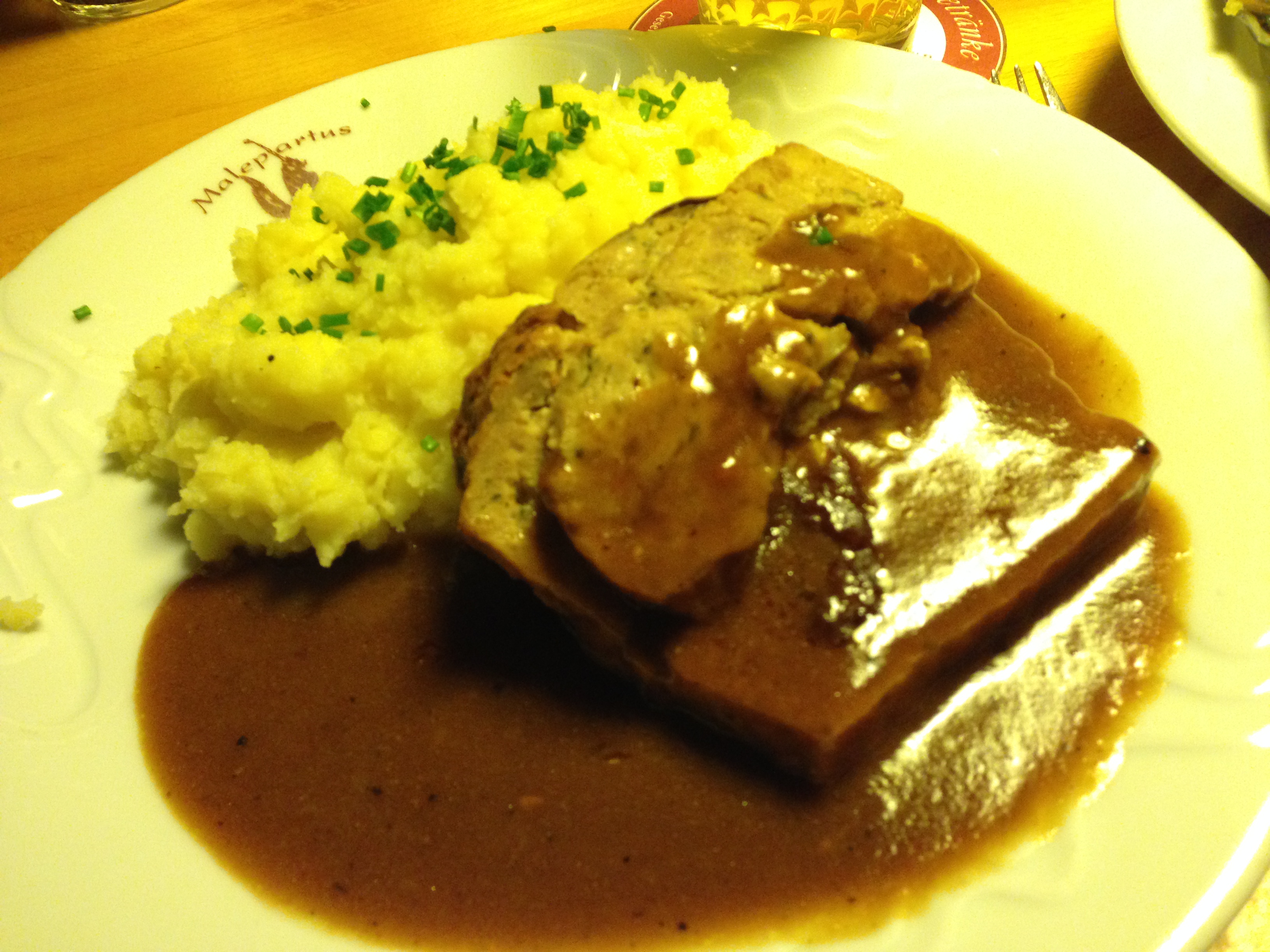 By this point, our jugs of local apple wine had disappeared. A digestif was in order.

In a flash, a round of little glasses filled with fruit appeared — mispelchen (3,20 E), a sort of German Calvados. I’m not the biggest Calvados fan but this was lovely — not too heavy, not too sweet. And each bite of the alcohol-drenched mispel — a little fruit that’s a cross between an apple and a pear — was a delight. 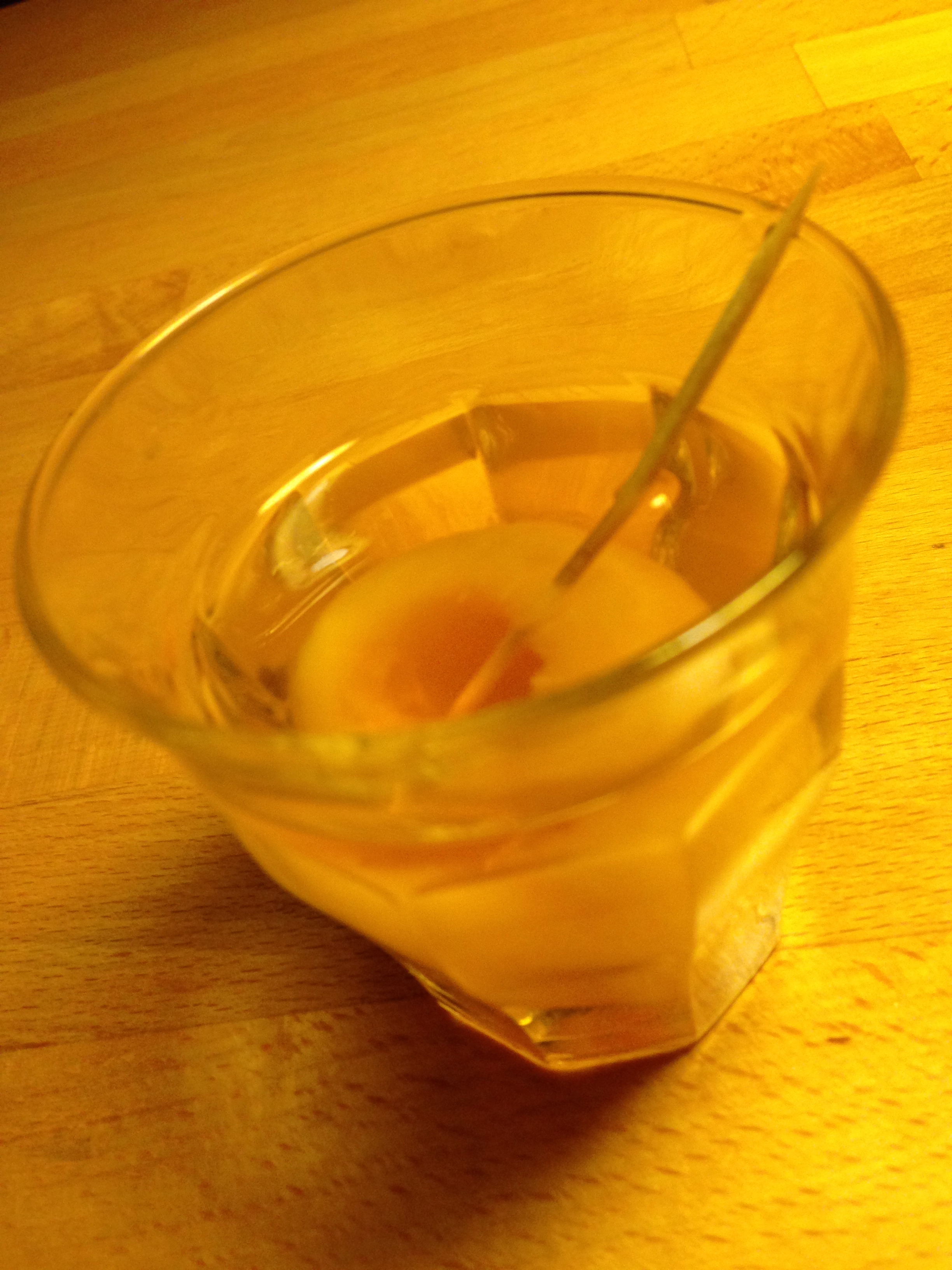 As we chewed on our mispels, the locals pondered a next step. “Schnaps!” someone said. And magically, a round appeared.

On the table were a few kinds — hazelnut, pear and apricot. After sampling them all, I probably leaned toward the fresh taste of fruity rather than the richness of the nutty. 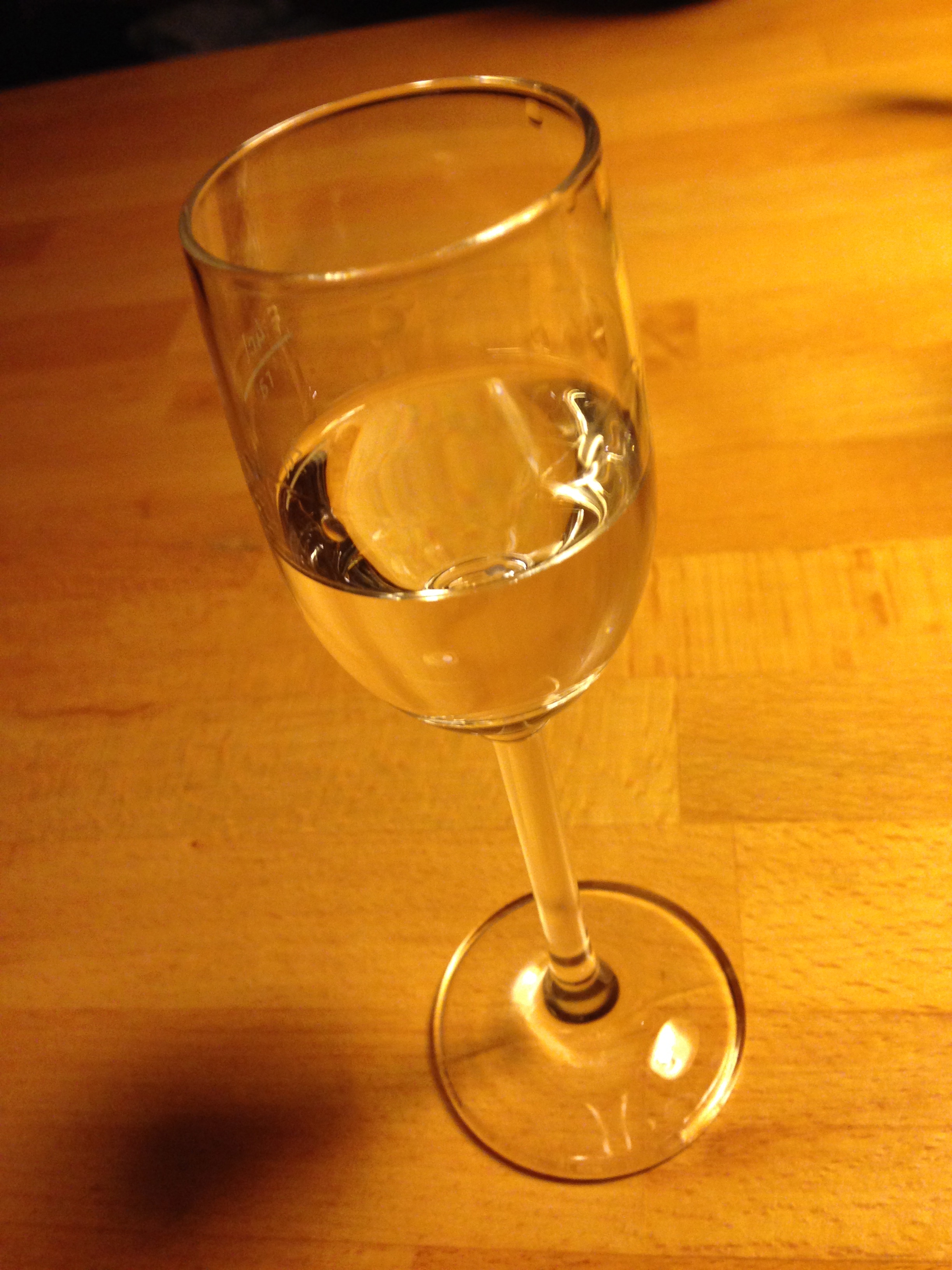 As our feast drew to a close, my guide leaned over and said, “We have a great word in Germany — fressnarkose,” which means “feeding on anesthetic,” or something like eating yourself into a narcotic state. (A much cooler version of the English food coma.)

“This,” my host continued, leaning back in his chair, “is fressnarkose.”