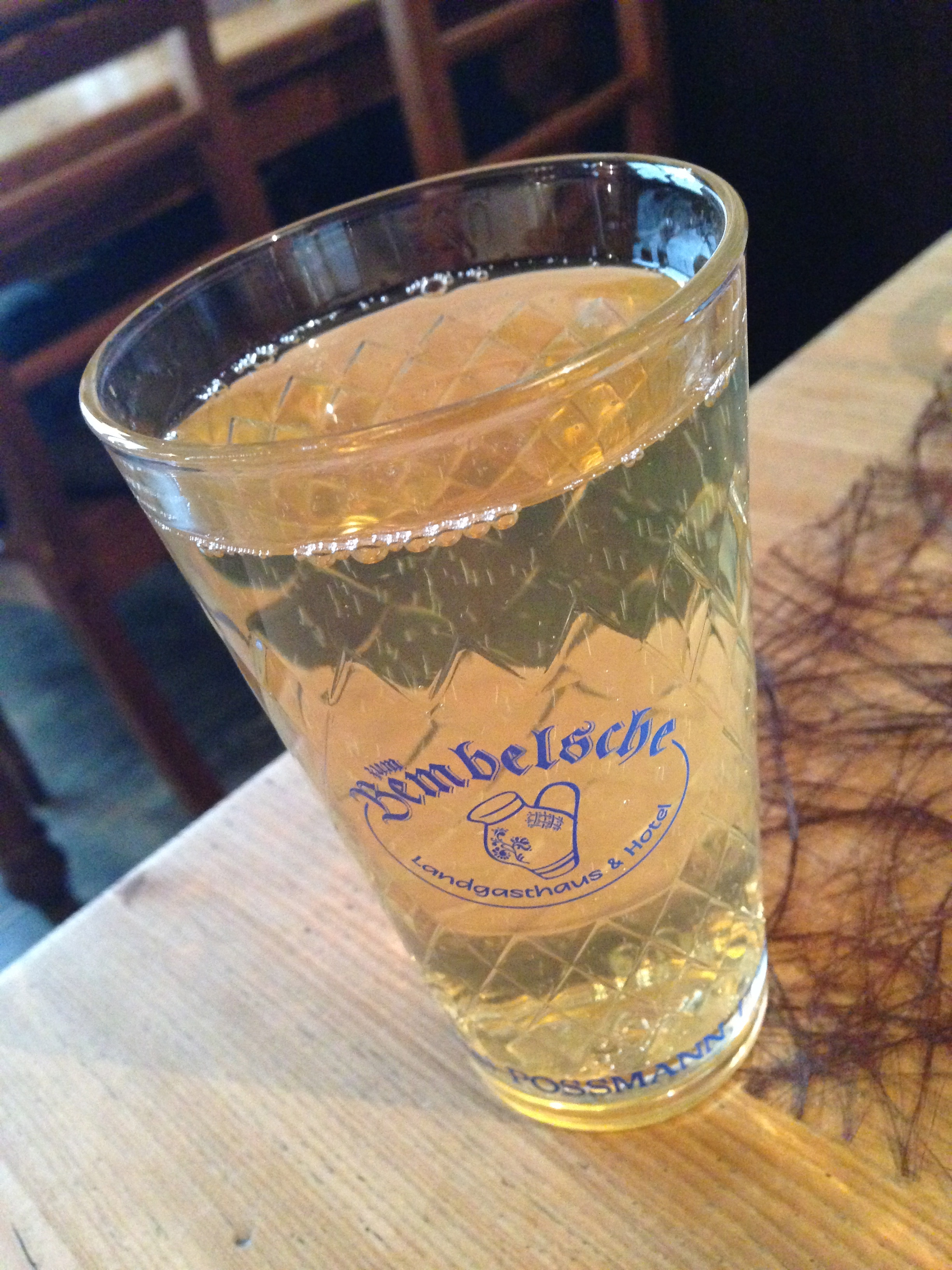 Of course I landed in Frankfurt hungry. Starving, really.

Not to mention exhausted, grumpy — and did I mention famished? Which is, as you might guess, not the best combination.

With the goal being to feed me — and fast — we decided to step into a place that popped up on a road nearby. Now, as someone who tends to like researching places before I pick up a fork there, I wondered, would this random choice near the woods of Raunheim, Germany, be OK?

The sound of its name — Bembelsche, which means jug of apple wine, the local specialty — was promising though. And schnitzel was on the menu.

It turns out that Zum Bembelsche Landgasthaus & Hotel is something of a local favorite. 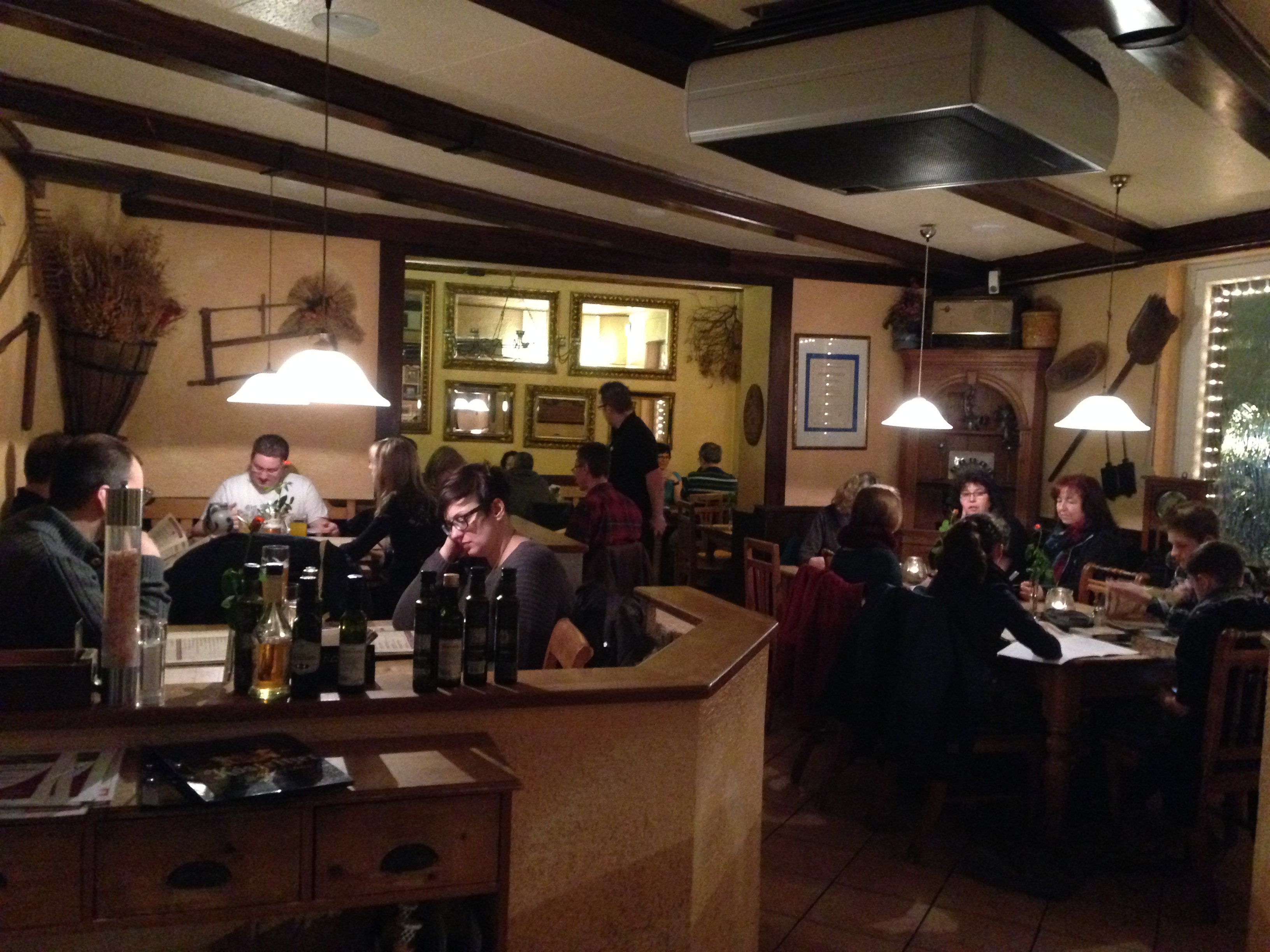 Its decor is modern rustic country inn — which it is. 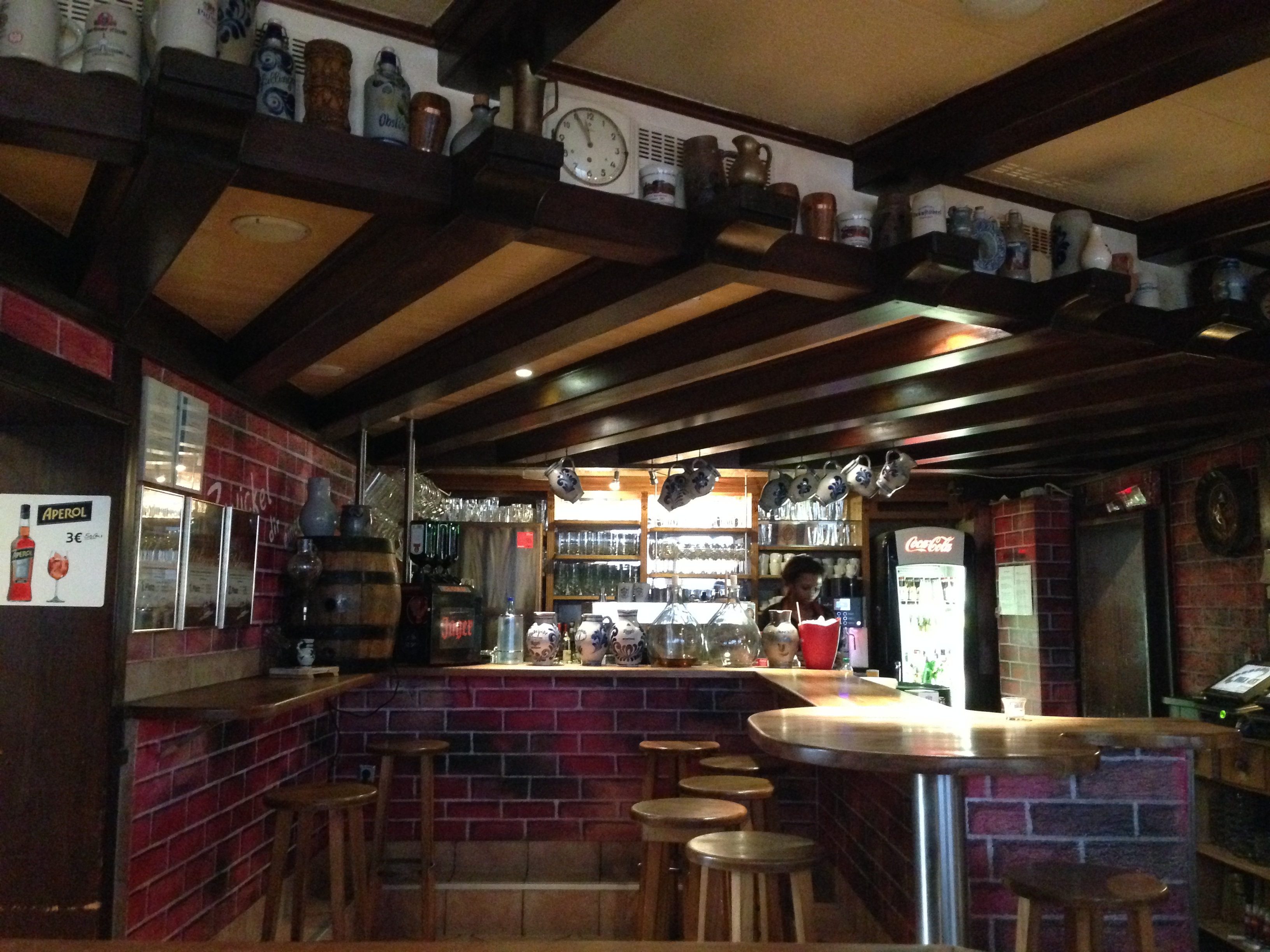 And although pictures on the wall show the house and town in old photos, this restaurant has actually only been around since 1999. 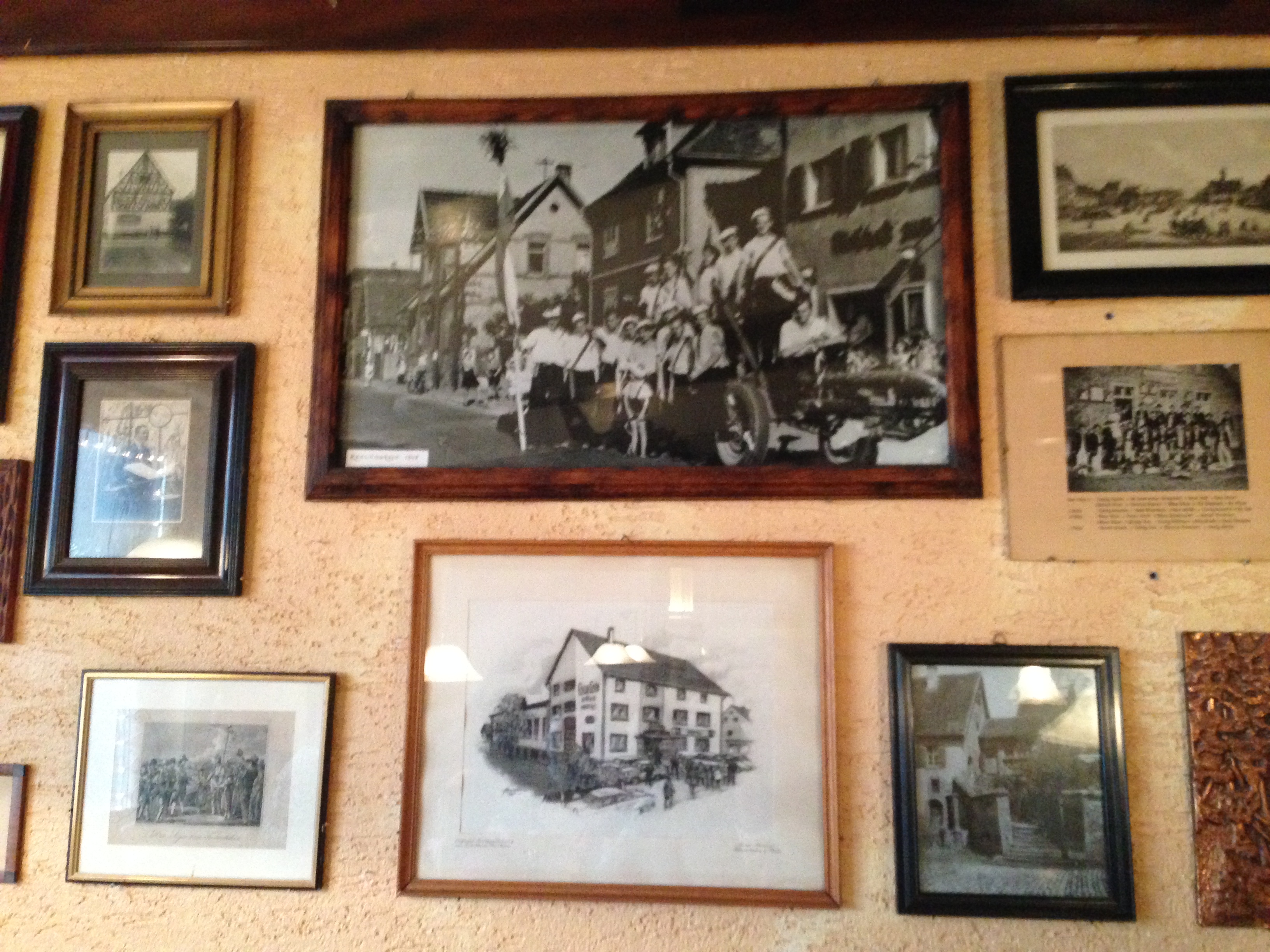 We weren’t there to ruminate on Raunheim history and gastropub lore, however. There was a task at hand — and so we began.

First up, bembelsche. As my host explained, apple wine is a Frankfurt classic — a must, really. You can have it two ways — with Sprite, if you have a sweet tooth, and with seltzer water, if you prefer things a little sour. All you do is fill a glass about 75% with apple wine, then top it off with your beverage of choice.

The Sprite version tasted a little too candied for me so seltzer it was. Slightly tart and fizzy with just a hint of sweet apples, this was delicious. 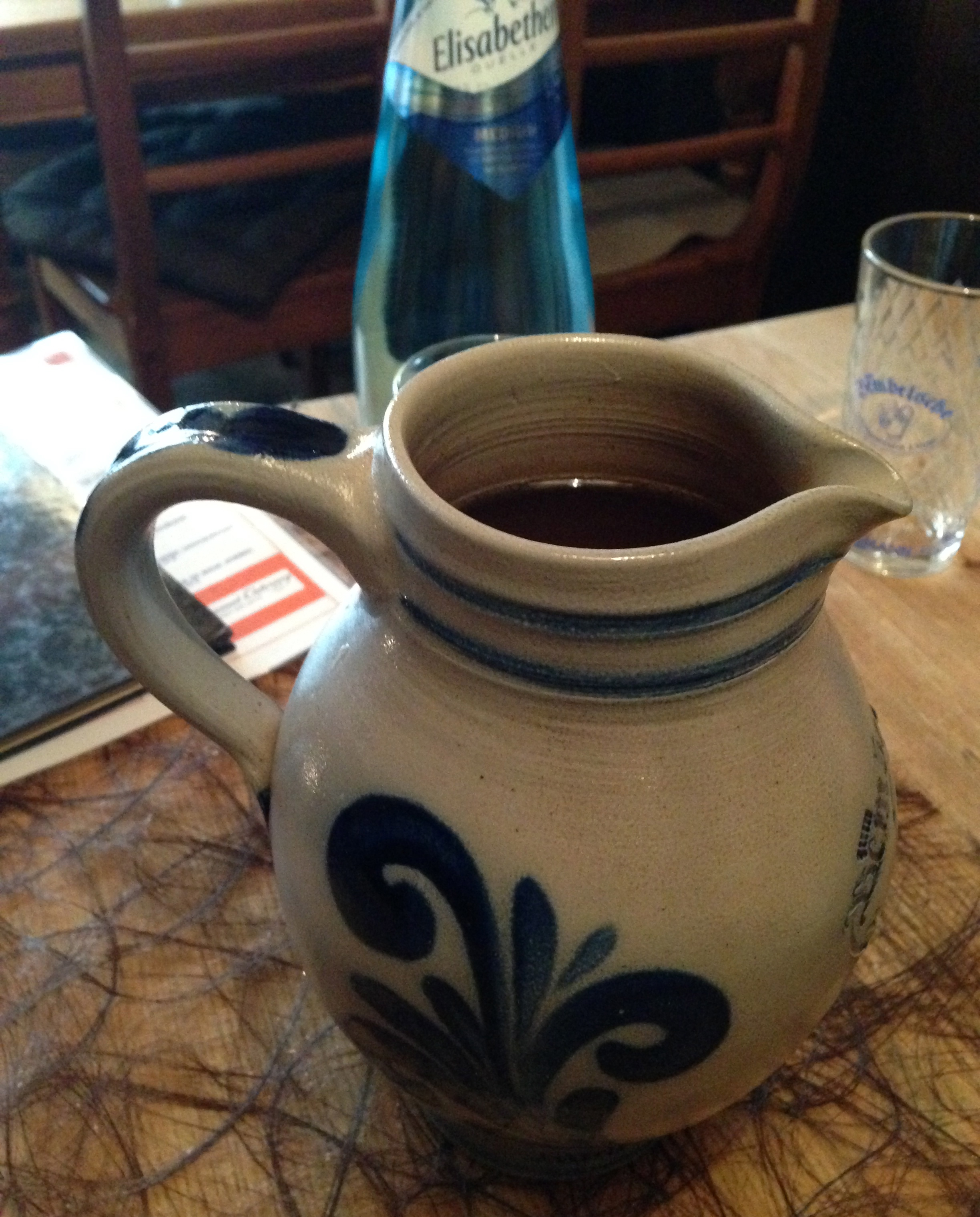 The menu is devoted to Hessian cuisine — food of the Hesse region, in which Frankfurt is the biggest city. This means it’s super meat- and schnitzel-heavy — all the things I love, basically.

To begin, there was the Sülzenauswahl, a platter of house-made beef and pork aspics with fried potatoes (8,40 Euros). I’m not the biggest aspic fan but these were rather tasty — gelatinous, fatty and meaty, in all the good ways.

And the potatoes — oh, the potatoes. These thin slices were fried so well there was a good layer of crunch, with a nice char, on each piece. 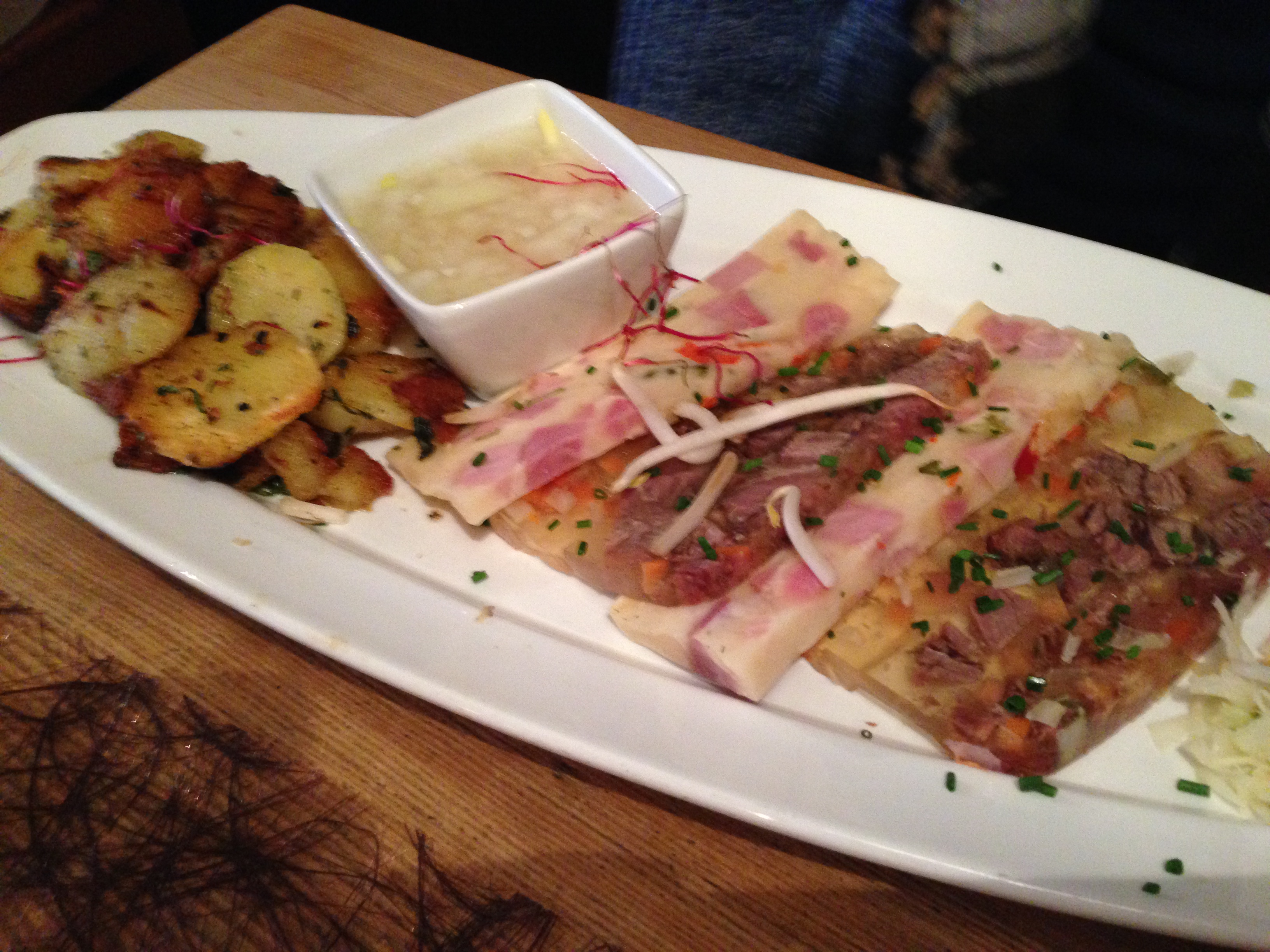 What I had really been looking forward to, however, was my first schnitzel in Germany.

If you’ve been reading this blog — or anything I have ever written about food — you may have picked up on my great love for hearty hunks of meat and breaded fried food. Schnitzel, of course, combines the two. Sheer brilliance!

Zum Bembelsche celebrates this dish in several ways — you can have it alone, stuffed with ham and cheese or topped with mushrooms, bell peppers or spicy pepper-cream sauce.

“Get the green sauce,” my host said. “It’s the traditional Frankfurt dish.”

So I did (8,90 E). And man, did this super-thick, creamy sauce pack a punch — it’s green because it’s just filled with herbs. Not only that — there were added treats in the form of bits of chopped hard-boiled eggs mixed into it.

The schnitzel arrived just south of singe-your-tongue hot — and fried to perfection. The crust was super crisp and the meat, juicy and tender. Paired with giant globs of chilled green sauce, each bite of this schnitzel was divine. 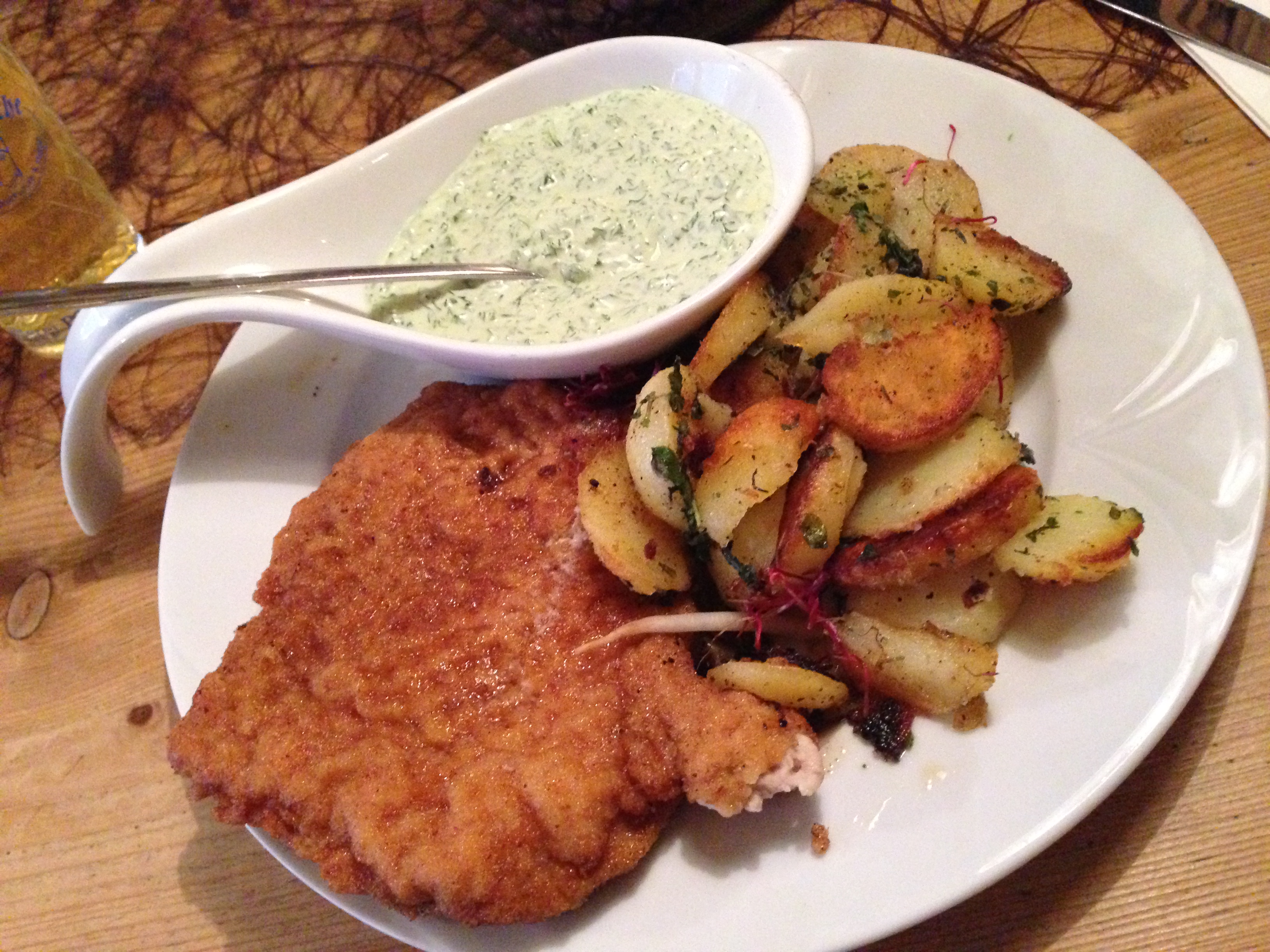 As I wiped my plate clean, I considered my luck in having this be my very first meal in Germany.

If a random restaurant on a random straße in a small German town could serve up such wunderbar food, surely only great meals lay ahead.

I couldn’t wait to be hungry again.