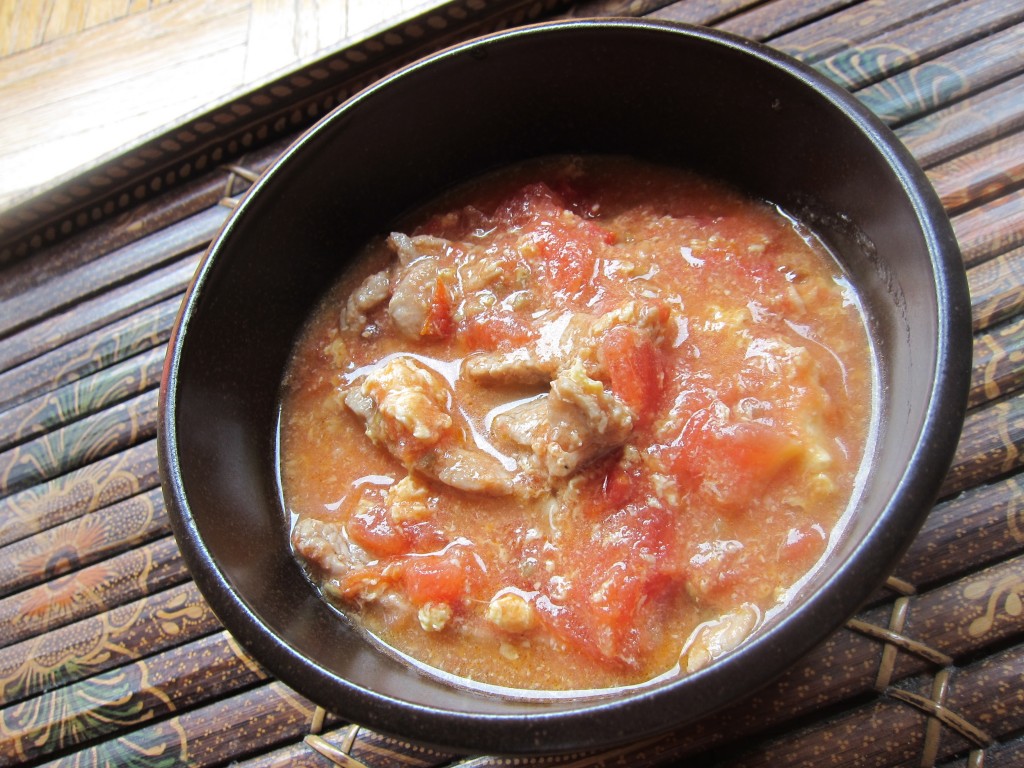 On a spring afternoon 16 years ago, my dear friend Kelly invited me into her kitchen.

This might not seem particularly noteworthy, given all you read about fearless kitchen action on this blog — except that at the time, I was a tepid (and rather terrified) culinary novice whose oeuvre basically spanned charred fried rice and idiot-proof instant noodles. As interns at the Oregonian, however, we didn’t have much money to eat out at the time, so Kelly invited me over one day to sample a stir-fry that her mom always made in their Indiana home. At Kelly’s small stove in Portland, I watched intently as she heated up oil, stir-fried tomatoes with some sugar, poured in some beaten eggs and in a matter of minutes, the dish was done.

I’ve thought about that meal often — not just because the dish itself was delicious. The diced tomatoes, softened and watery from sloshing about the wok, mingled with hearty eggs and laced with sweetness, made for a combination that was heavenly scooped over hot rice.

Mainly, however, I remember how simple Kelly made it look — and how adult it seemed to be cooking an actual meal that didn’t involve ramen powder packets or crusty burned bits. I remember that I wanted to be Kelly.

Although we stayed in sporadic touch over the years, I never thought to bring up this meal to Kelly — until we caught up at my “A Tiger in the Kitchen” reading at Powell’s in Beaverton, Ore., last month. Over spicy Korean hand-pulled noodles and dumplings after, I finally asked. “Do you remember that tomato and egg dish you made?”

And oh yes, of course she did.

Just hours after we’d hugged our goodbyes, an email from Kelly arrived. Now, as it is with many great home cooks who do it all by instinct, Kelly’s instructions on this stir-fry are imprecise. As she mentioned in her email, the recipe was written “as far as I can nail down. The amounts are total guesses.”

Guessing, if you’ve read “A Tiger in the Kitchen,” is big in my family when it comes to cooking as well. Nothing is measured out — my Singaporean aunties have been known to slit open giant bags of sugar, hoist them over the wok and just start pouring when making pineapple jam. So I was prepared for Kelly’s recipe.

As I went along, I did some guessing myself — I marinated the pork in a little soy sauce, salt and white pepper for about half an hour before frying. And I wanted it a little sweeter so I added in a teaspoon more sugar than Kelly called for. And the result was incredible — the pork was lovely and tender and the egg-streaked gravy was a tangy combination of sweet and gingery. (This gravy only got better overnight when the ginger flavor had more time to fan out — I highly recommend making it the day before, especially if you like ginger.)

Now, you can make this with or without pork or with chicken, tofu or beef instead. I intend to try as many of those combinations as I can.

As for Kelly, thank you for this recipe, dear. I still hope to be you someday.

Slice pork into french fry-sized pieces. In a wok, saute with a little oil (1 TB perhaps) and some salt until just done. Set aside.

Add more oil to wok. Sprinkle rest of salt on oil and add ginger. After 20 seconds or so, add tomatoes. Mix and let cook uncovered for a few minutes. Add sugar.

Drizzle beaten egg over tomatoes and let the egg set without stirring. If using pork, mix it back into the tomato-egg combination.