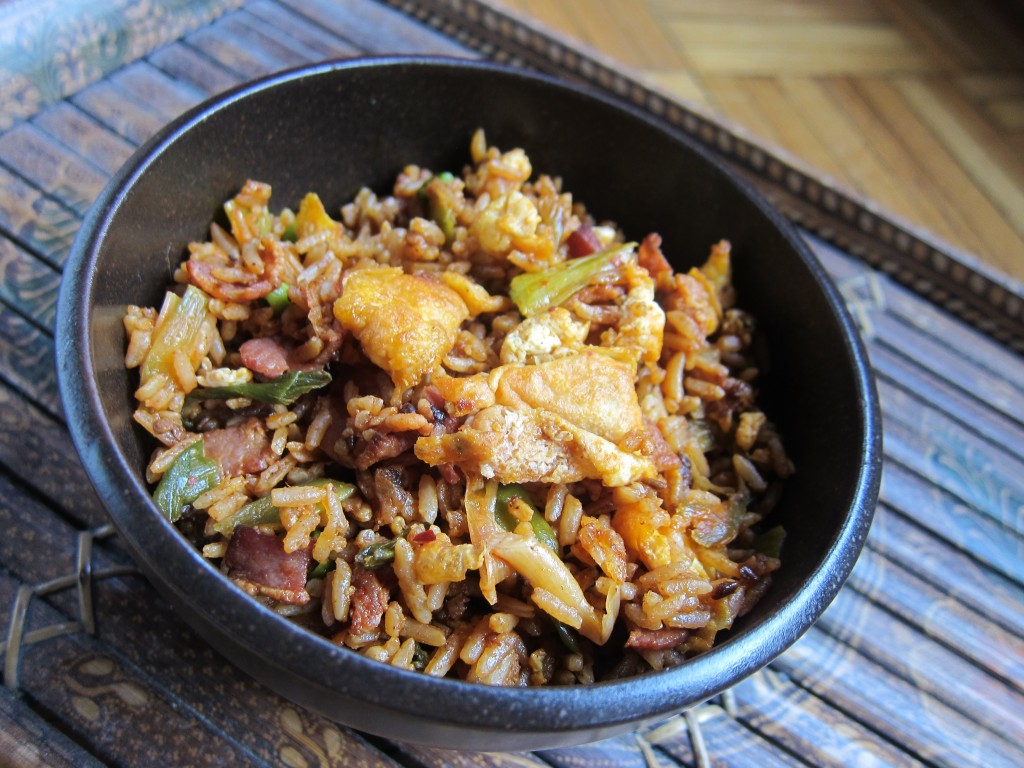 Among the amazing food discoveries of my recent life, this one is certainly up there: A little grocery store very near me in Brooklyn sells kimchi. Lots of it.

It’s the good stuff, too –pungent, spicy, tart and tangy. But what this means is that the sous chef and I have been eating a fair bit of the stuff.

What to do with kimchi? We ran through the obvious in the first several meals — kimchi omelets, scrambles, kimchi with rice, porridge. You name the easy, we tried it.

Kimchi fried rice, however, was daunting to me. Fried rice was the very first Asian dish I tried to make — and if you’ve read A Tiger in the Kitchen, well, you might recall the outcome of my first attempt.

When I read about New York chef David Chang’s fervent belief in bacon and kimchi being made for each other, though — and how he uses it in fried rice — I was sold.

The past was the past, I decided. With a little research into kimchi fried rice, out came my wok and I was ready to give this a try …

After scouring the Internet for the dozens of ways in which people out there have made kimchi fried rice (with or without bacon), I picked the three recipes that I felt were the best out there and combined them.

The first is from Food & Wine, the second is from Rasa Malaysia and the last, which formed the backbone of the method for my Franken-KimChi Fried Rice recipe below, is from Momofuku For Two, written by a blogger who clearly adores David Chang (and also manages to take photos of her cooking process that make me want to eat my screen).

For my recipe, I took bits that I liked from each of the three and wove them together. And the result was delicious — each bite of rice was incredibly flavorful. There was an intense smokiness laced throughout — no doubt from the bacon fat as well as the crisp bacon — a nicely sour fire from the kimchi and its juices and the kochuchang, sesame oil and soy sauce lended a deep salty sweetness to it all.

My only complaint was that this recipe can be a bit of a pain to make, since you’re frying several ingredients separately and then setting them aside for mixing later.

So, I say next time you find yourself with kimchi to spare, give this a whirl. But a little advice: You might want to double the recipe first.

Heat a little vegetable or corn oil in a wok — when it’s sizzling hot, pour in beaten eggs and quickly fry it up, breaking it into small pieces. When eggs are cooked through, remove and set aside in a large bowl. Add peas to the bowl, mix well.

Mix together soy sauce, sesame oil, kochuchang and white pepper in a small bowl, stir well and set aside.

Heat about 1/2 TB of vegetable or corn oil in wok until it’s shimmering. Add onions and stir well, cooking until they’re fragrant and soft (but not brown). Using a slotted spoon, remove onions from the wok and transfer to the large bowl with the eggs and peas, setting that aside. (You want to preserve as much oil in the wok as possible.)

Heat up wok then add chopped bacon and cook until the pieces are crisp. Remove the crispy bacon with a slotted spoon (again, preserving the bacon fat in the wok) — transfer the bacon to the bowl with the eggs, peas and onions.

Heat up the wok again — it should still have a fair bit of bacon fat and oil in it. Once that’s hot, add minced garlic and stir-fry it quickly until fragrant (about 30 seconds to 1 minute on high heat). Add rice and quickly fry it up, breaking up the clumps of rice and making sure garlic is evenly mixed into it.

Dish out onto rice plates or bowls, top with a little minced scallion and eat right away.