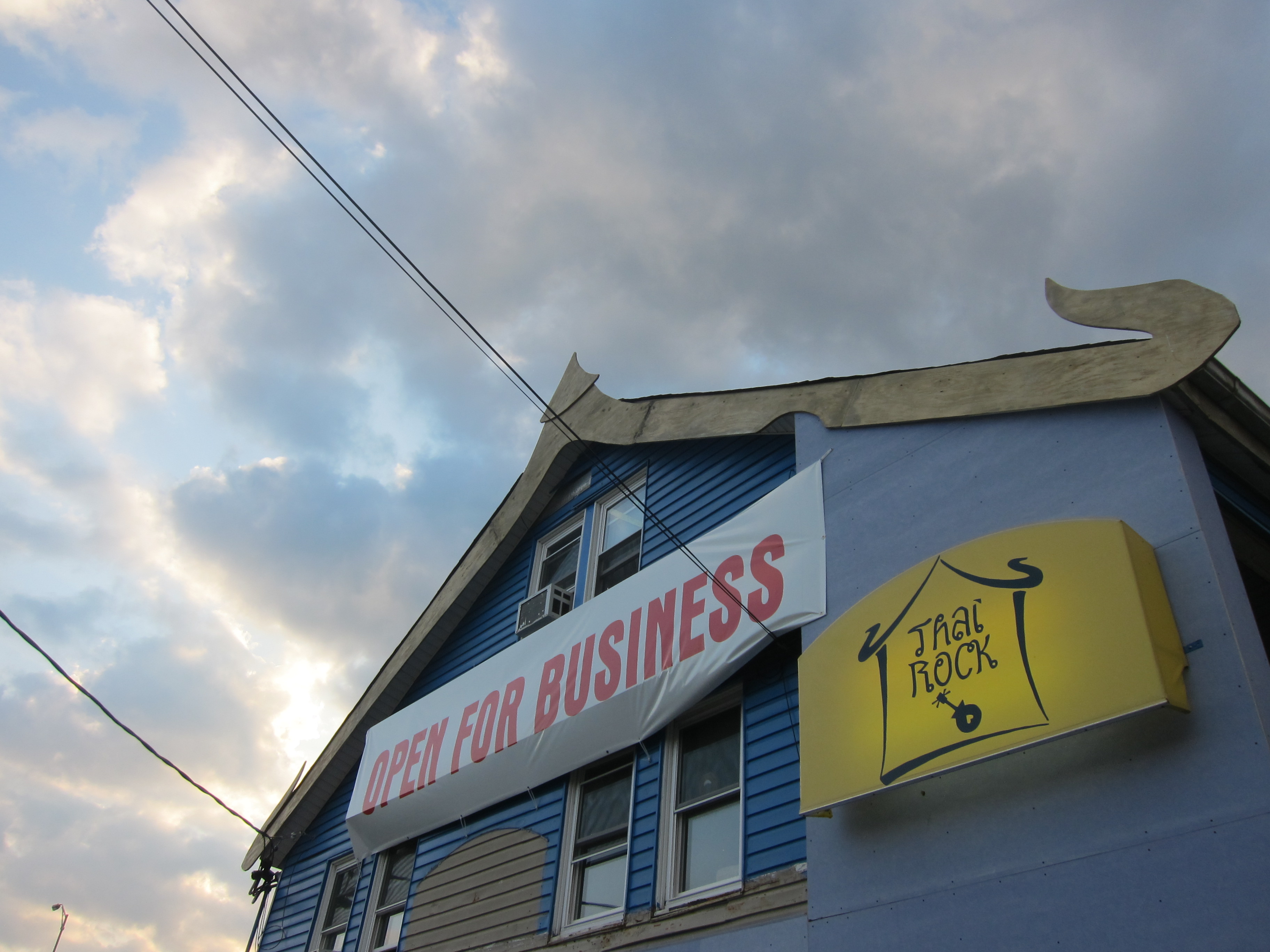 Every few days or so, a craving will kick in.

If I haven’t been cooking or if I’ve been on the road, unless I’m in Asia, I’ll start to really need the taste of Asian food of some sort. So, after a few days of lovely fish sandwiches and hot dogs at Rockaway Beach, I started sniffing around for something a little closer to home.

And then I remembered a sign on a building by the water: “Thai Rock.” And off we went …

I had read about this place — it had only been in business for two years before Hurricane Sandy hit in 2012, destroying its deck and leaving soggy wooden floorboards from waist-high water within.

It’s part of the peril of being right on the water — which, fortunately for diners most of the time, offers lovely views, especially if eating al fresco. 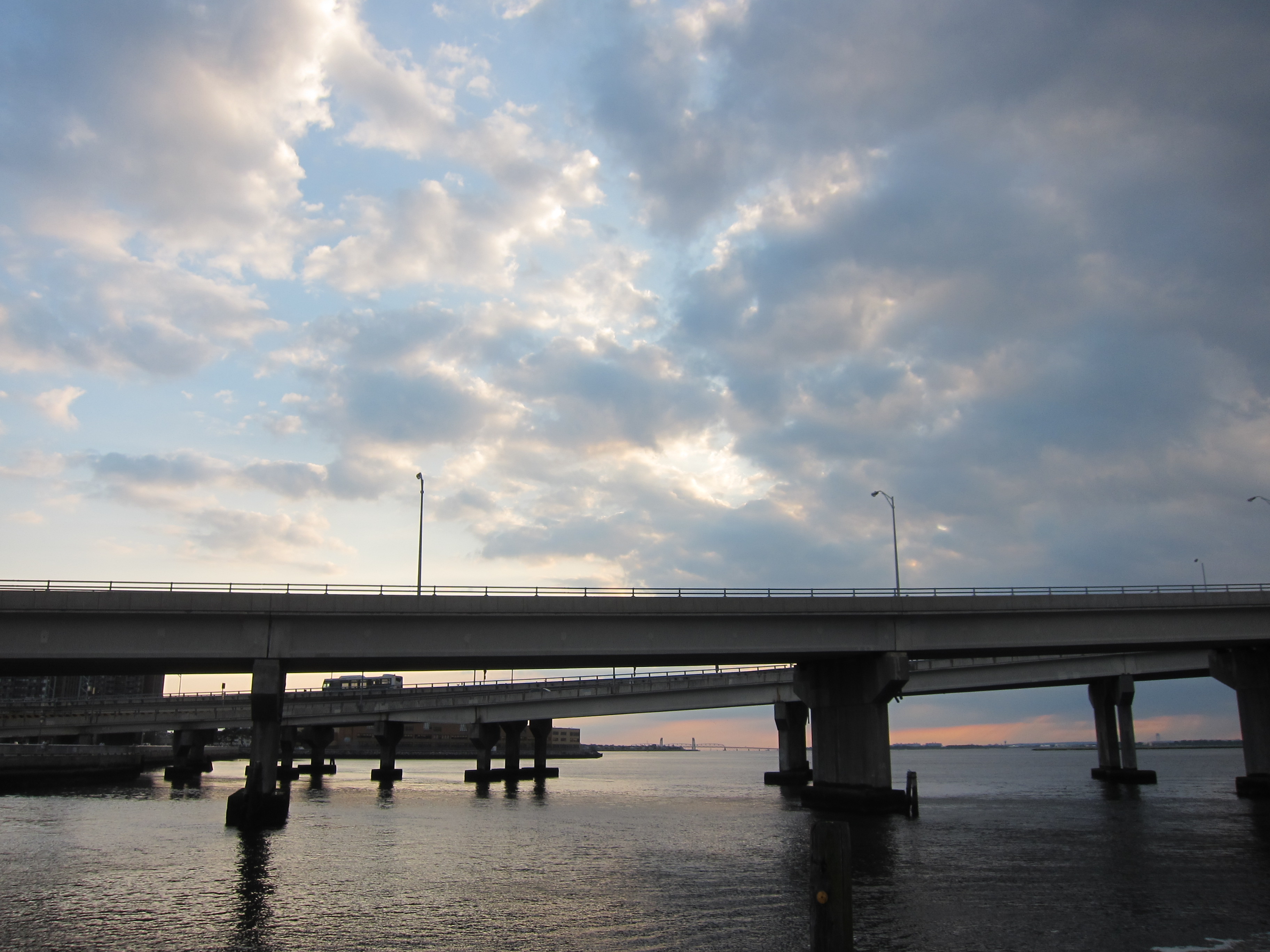 Plus, if you feel like getting a little exercise in before dinner, the owners rent jetskis as well. 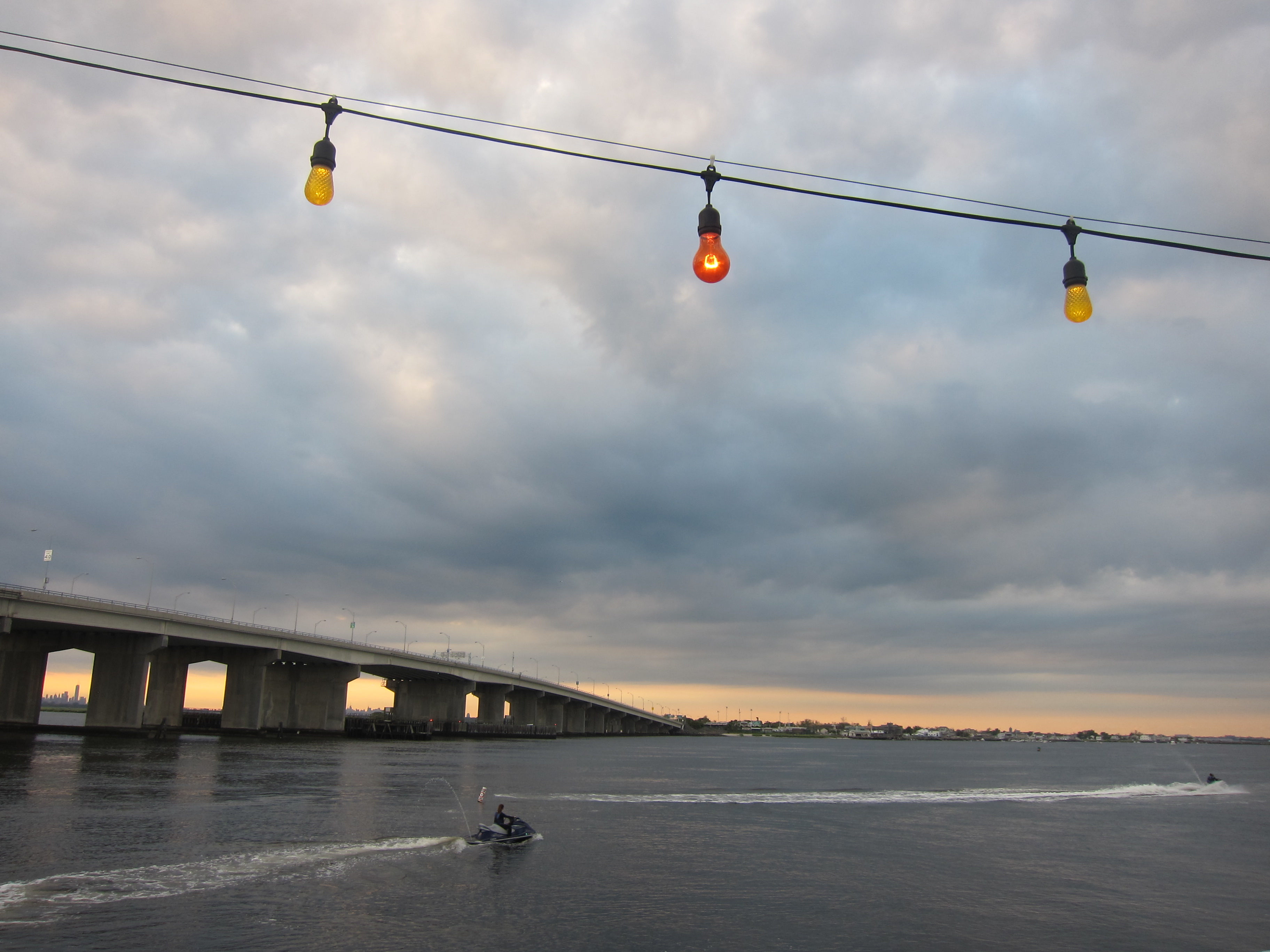 As expected, the deck was packed by the time we got there at cocktail hour. 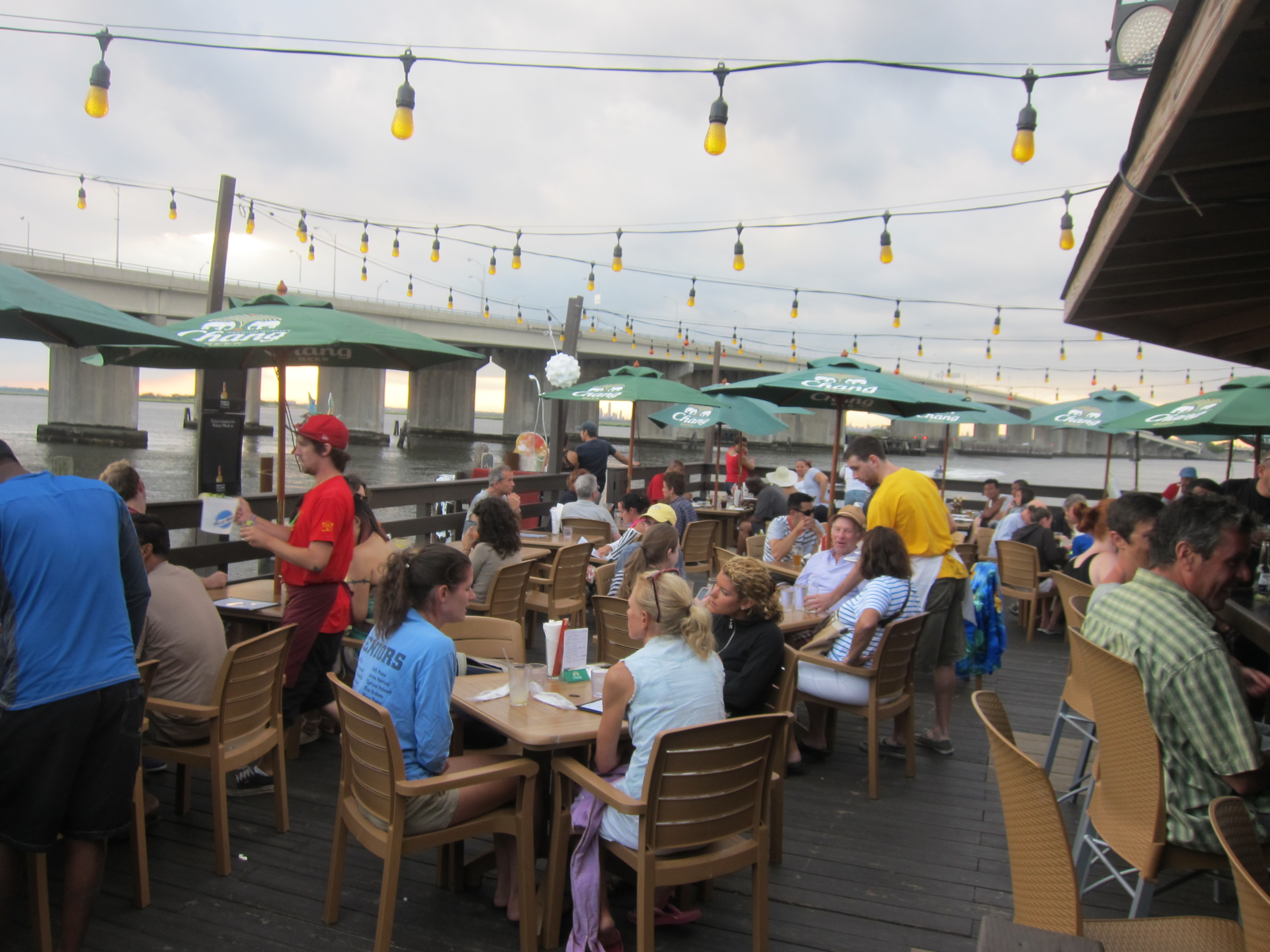 But turnover is pretty fast here, it seems — we were seated within minutes. (Waiting for someone to bring over the specials menu and take our drink order took a little time, however.)

Nonetheless, we were hungry. And I found the handwritten — and canceled out etc. — specials endearing. (And perhaps also a good sign — it could mean that they update the specials list every day? One could hope.) 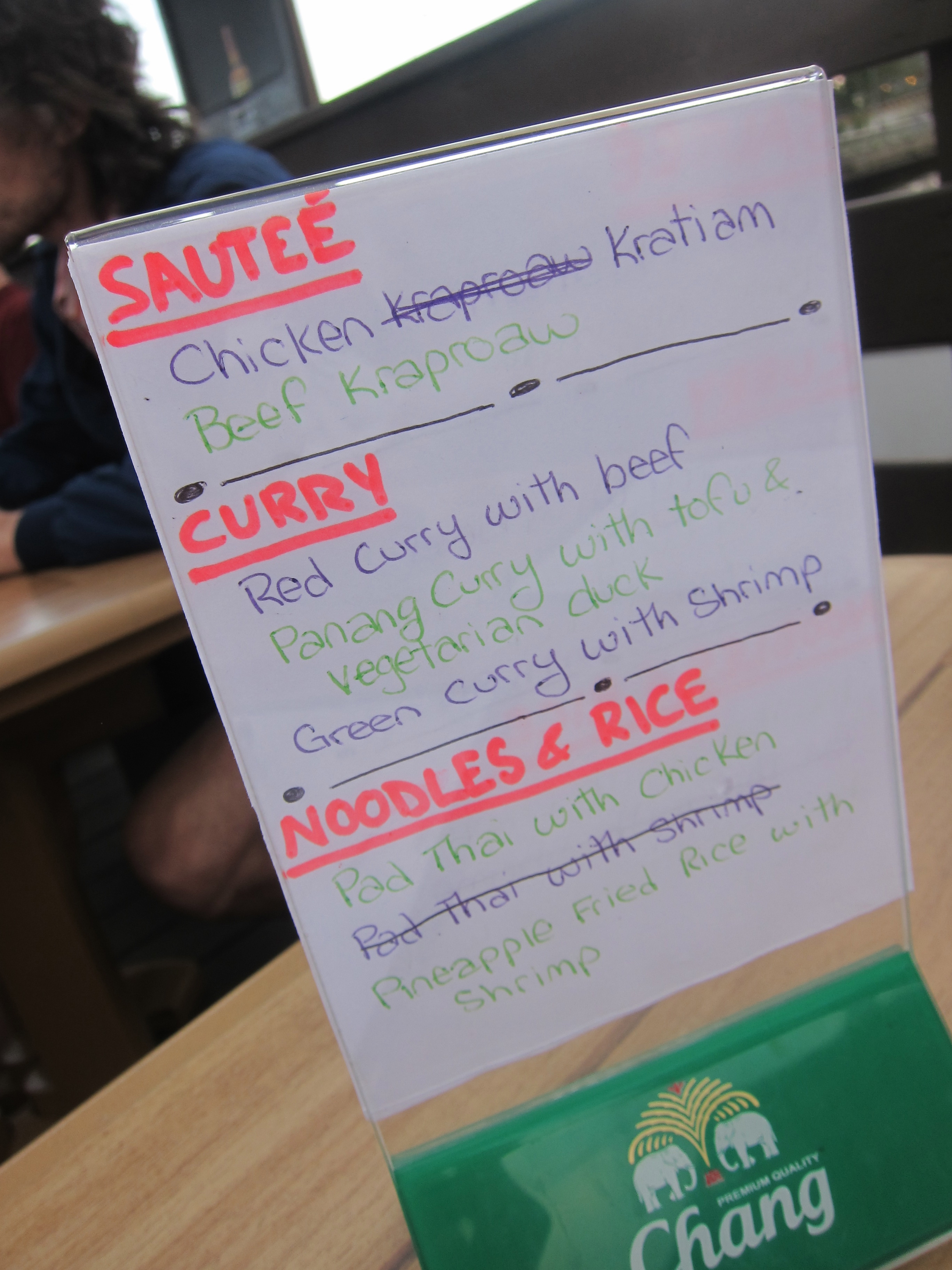 The restaurant’s cocktail list is hefty, inspiring us to venture out of the sparkling or white wine box for a moment to sample a ginger mojito, which turned out to be a refreshing concoction that packed just a little zing from the ginger and wasn’t too loaded with spirits. 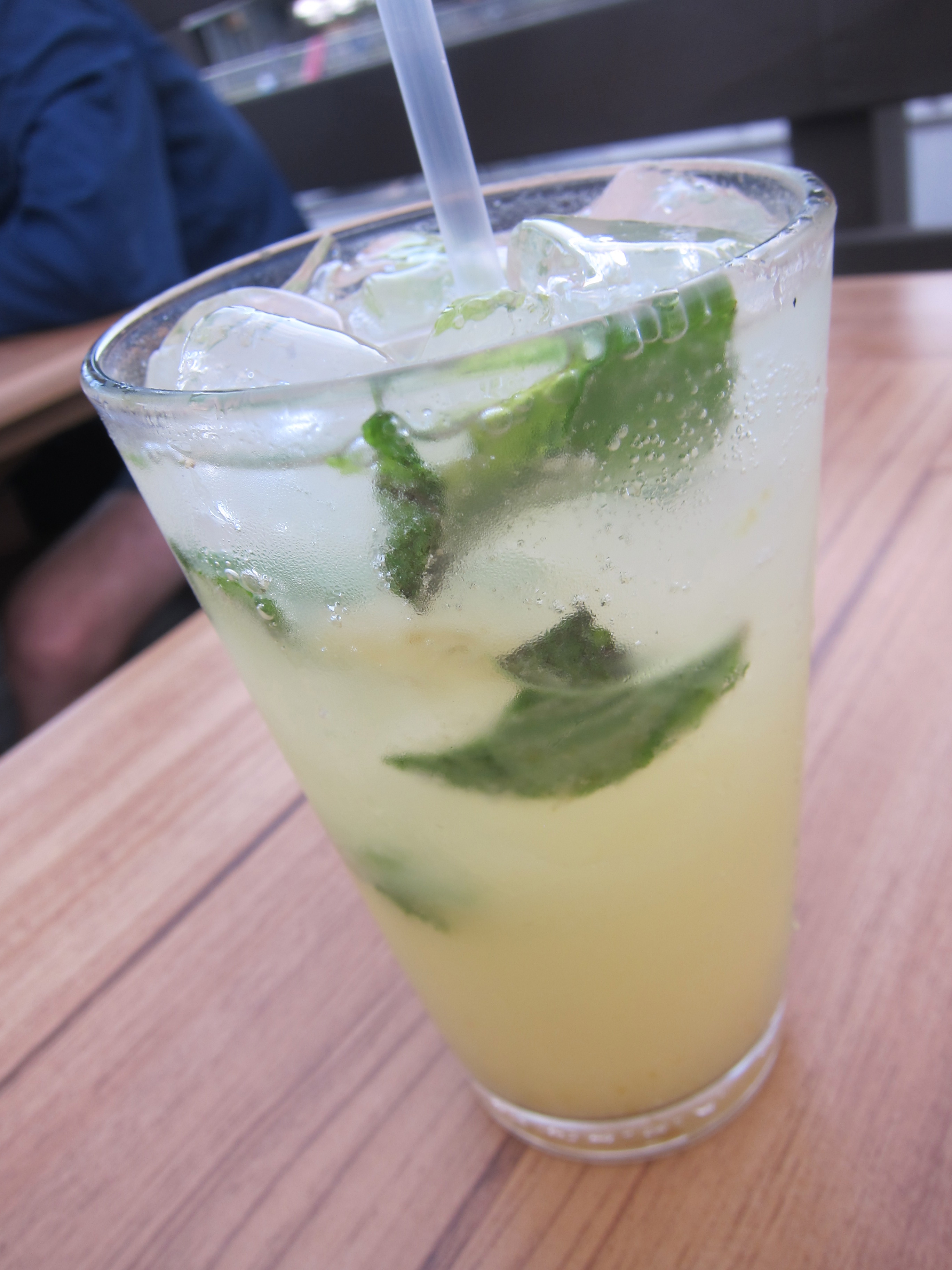 Even though dumplings aren’t particularly Thai, they were pretty much the only appetizers listed. So, an order of shrimp dumplings to start, it was.

They came nicely arranged on a paper plate — which was lovely. And they were all right — we were hungry; they filled us. 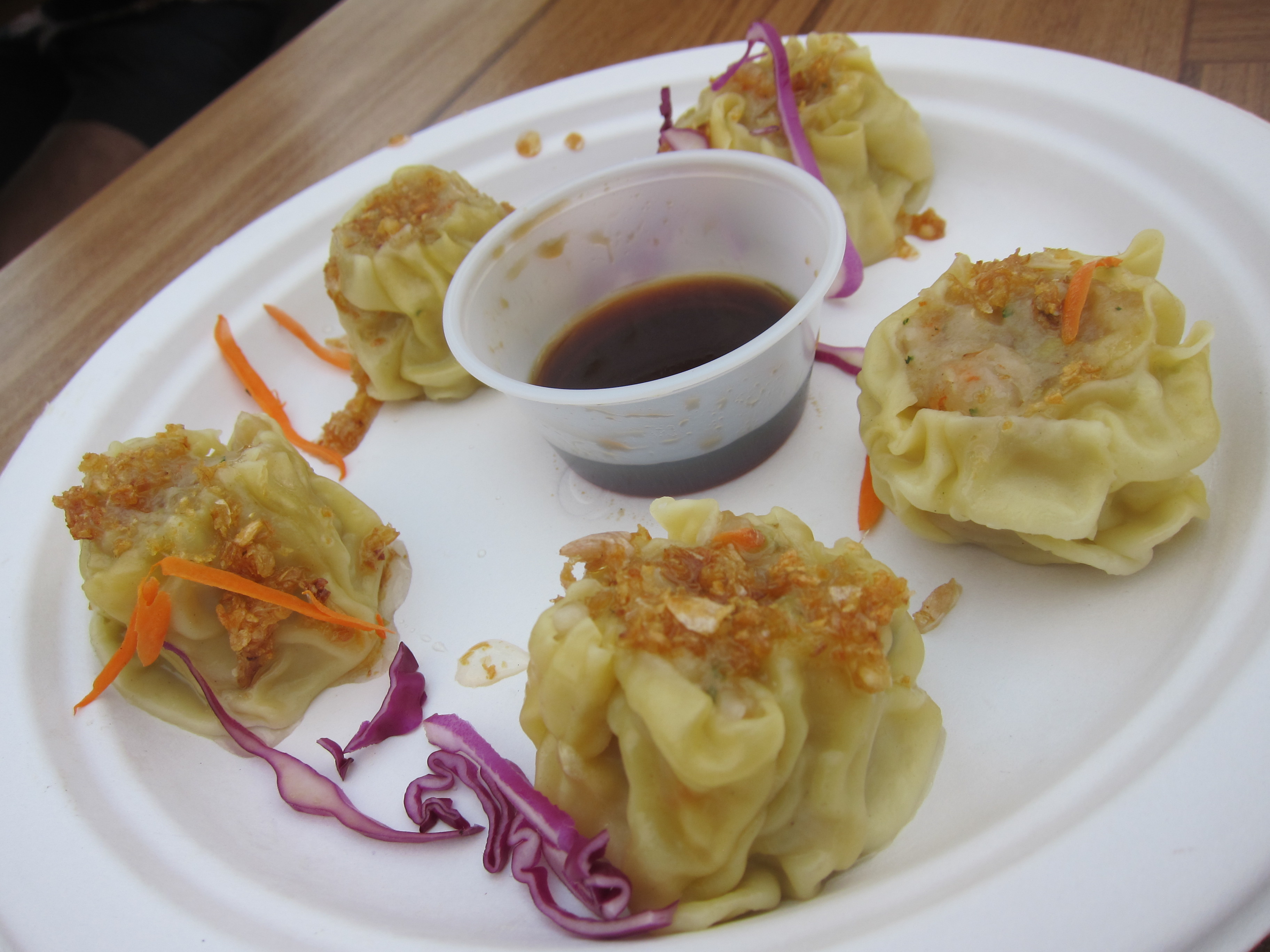 Now, the sous chef is the biggest pad thai fan — he can never resist ordering it once he spots it on a menu. And besides, this place is supposedly run by two sisters who once worked in restaurants in Thailand. How bad could it be?

I could tell the moment I spotted the plate that the noodles were off — I didn’t even have to taste it to know that the noodles were gummy. But the bigger travesty was how flavorless the dish was — where were the delicious hints of garlic, fish sauce and more that make pad Thai phenomenal?

In its place was a sickly sweet tomato flavor on gummy noodles coated with gritty grains of scrambled egg.

Sous chef, who almost never complains about anything he eats (he grew up polite that way), looked miserable.

“These are the worst noodles I’ve ever had,” he said.

And that’s saying something. 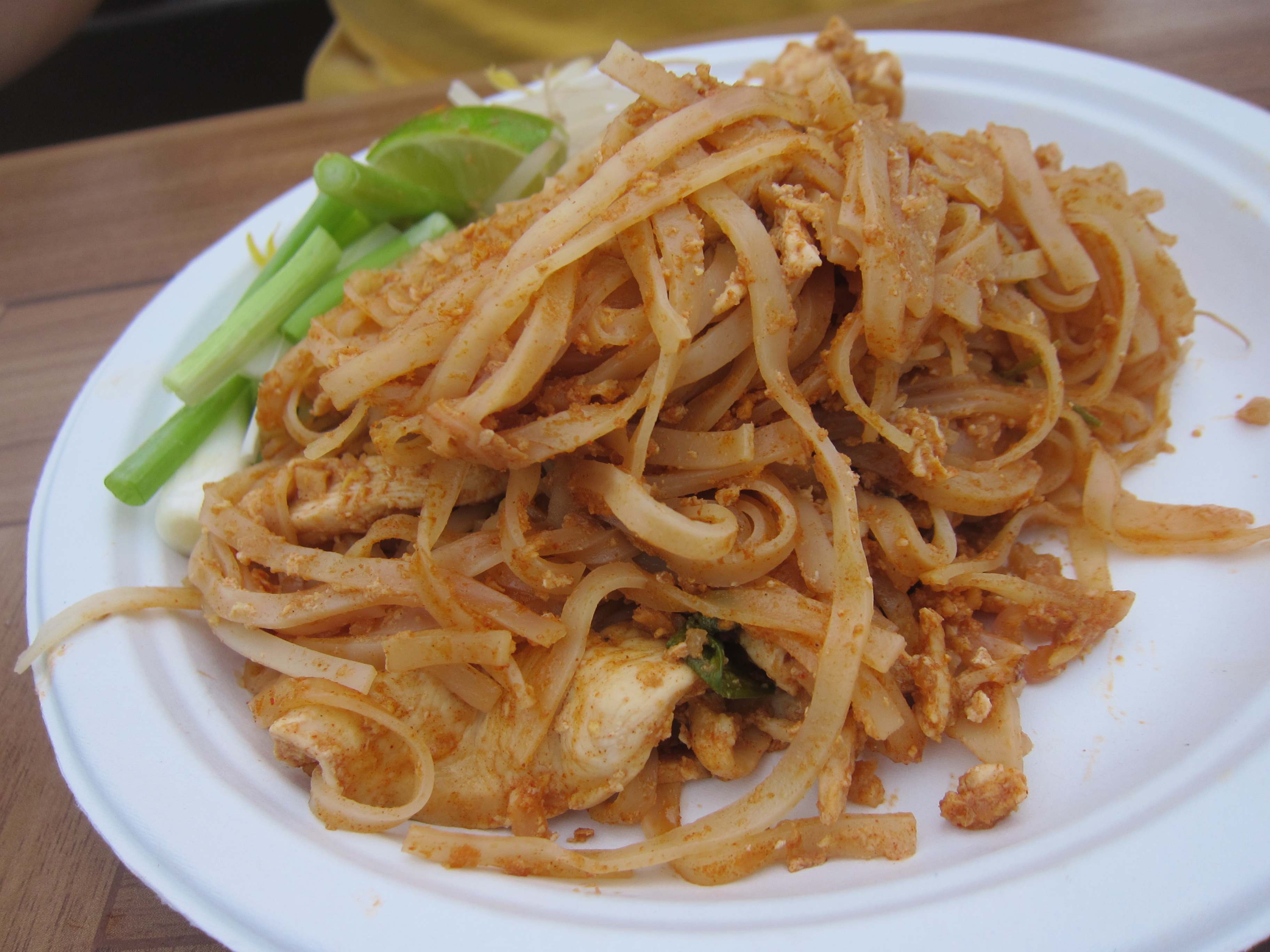 Thankfully, our other dish wasn’t as bad. Thai Rock has a small section just on grilled meats, featuring Crying Tiger, chicken satay and a “Thai burger” marinated with cilantro, basil and red onion — which tempted me until I saw the young Asian woman a few tables away order it and wrinkle her nose after a bite.

To me, it’s hard to screw up grilled meats, so when it doubt, go with the foolproof choice. (This was a policy that had recently served us well at another Rockaway Beach establishment, after all.)

So I ordered a grilled pork chop marinated in garlic, cilantro and white pepper, served with a house-made chili sauce. 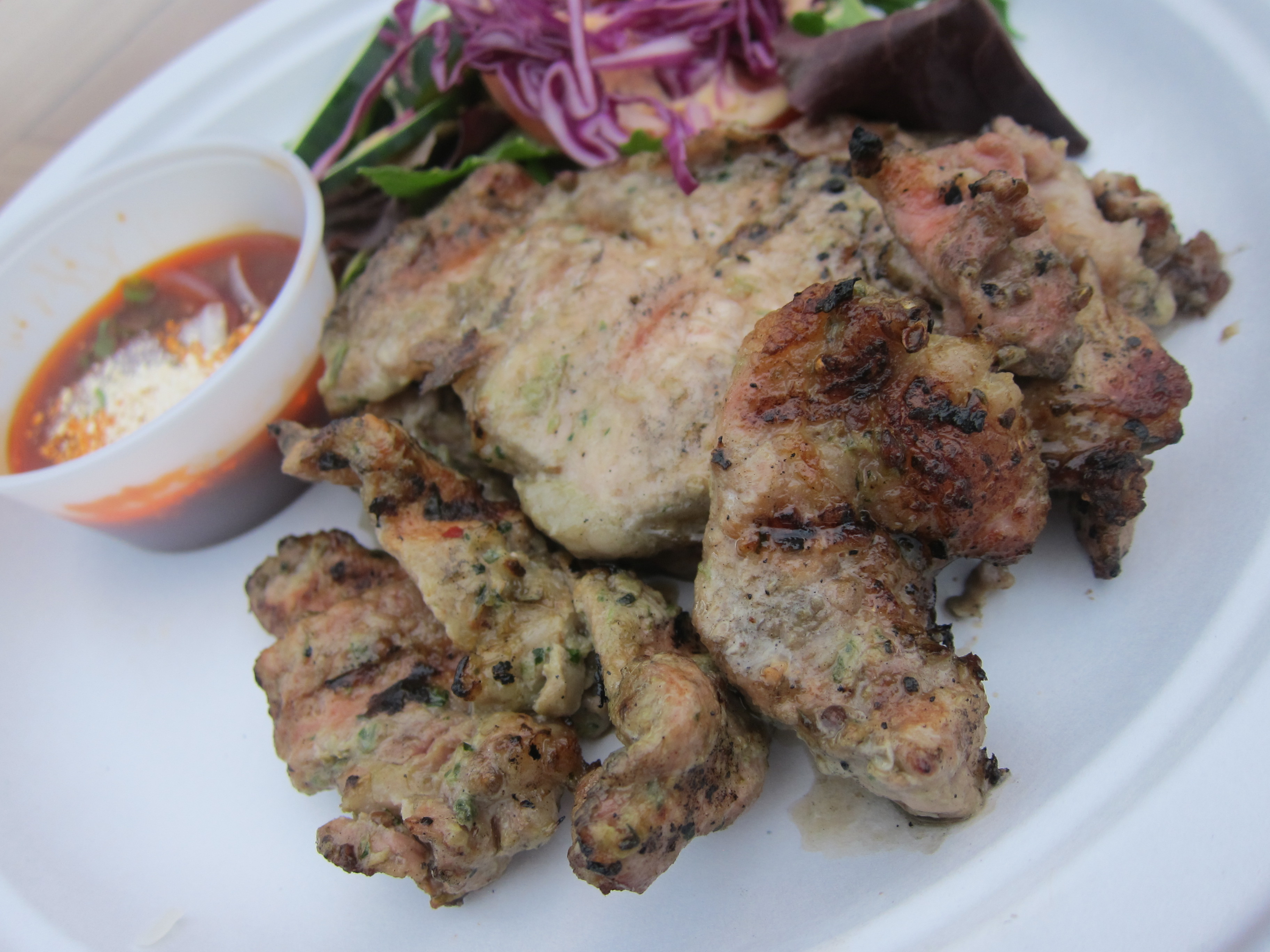 While this was not much like any Asian grilled pork chops I’ve tasted, it was edible. The house-made chili sauce was another matter, though — this was, again, intensely sweet. (In fact, it looked and tasted just like the bottled sweet chili sauces I’ve purchased at Asian groceries for sous chef, who is partial to them.) What we couldn’t figure out was what the gritty coating of crunchy bits on top was — after a few tastes, our best guess was Kraft grated parmesan cheese.

Now I’m a fan of the fiery, so I asked the waiter if he could bring out some chopped Thai bird’s eye chilis. After disappearing for a bit, he returned to explain that the kitchen didn’t have any.

But how could this be? That chili is so central to Thai cooking — I had seen kra pao beef on the menu. Surely, the chef must use the chili somewhere — anywhere — on the menu or as an ingredient in a condiment?

The waiter looked a little sheepish and explained that the restaurant dishes really were designed for Americans.

“So, people who like Asian food that’s sweet, not spicy?” I asked.

He nodded, shrugged and scurried away.

And right there, this got to heart of my pet peeve with lousy Asian restaurants. When you blatantly dumb your food down, the dishes suffer. And really, if you’re that kind of chef, I lose all respect for the establishment.

So when it came time to order dessert or more — even though we were still hungry, our choice was clear.

No thanks — there had to be a better second dinner out there somewhere.