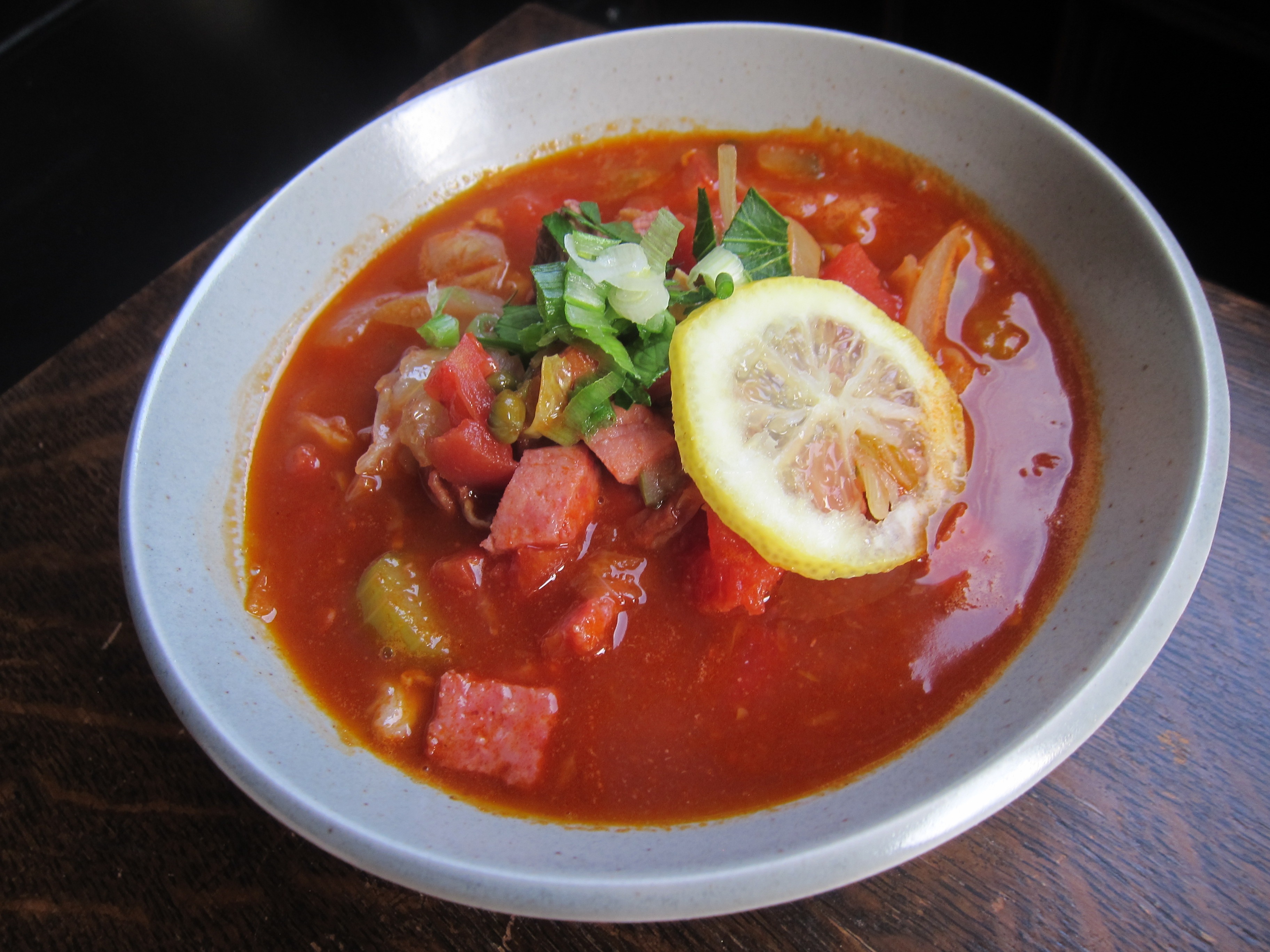 Tropical girl that I am, the Winter Olympics have never held much fascination for me.

Yes, there’s figure skating — which I adore — but the rest of it usually goes by in a bewildering blur for me once the games start. (Of course, all of this could change should I ever decide to get off my tush and actually go skiing for the first time.)

Olympics-inspired food, however — now that fascinated me. So when our Let’s Lunch crew decided on an Olympic spirit-themed lunch to toast the opening of the Sochi games, I was in.

What to make? A certain Russian sweet and sour beef soup seemed just the thing for snowy conditions …

I’d come across solyanka during a recent craving for hot homemade soup. I’ve been on a soup-making jag at home recently, and that’s been lovely and great, but after a while, my random clear-the-fridge soups can feel a little haphazard. That’s when a Saveur Tweet about Solyanka, a hearty Russian sweet and sour beef soup caught my eye.

Now, having never made or eaten this before, I wanted to make sure what I might be concocting was the real deal, so I ran this recipe by a dear friend who’s not only of Russian descent but has had solyanka in Russia. It looked legit, he said, noting that instead of sour cream, he’d had it in Russia with creme fraiche or mayonnaise.

The recipe is pretty daunting — the ingredient list alone is head-spinning. But if there’s anything I learned in my research for A Tiger in the Kitchen, it’s that many memorable dishes aren’t the easiest to make.

First, I fried up minced bacon and removed that. Then fried some beef, kielbasa, salami and ham in the bacon fat. 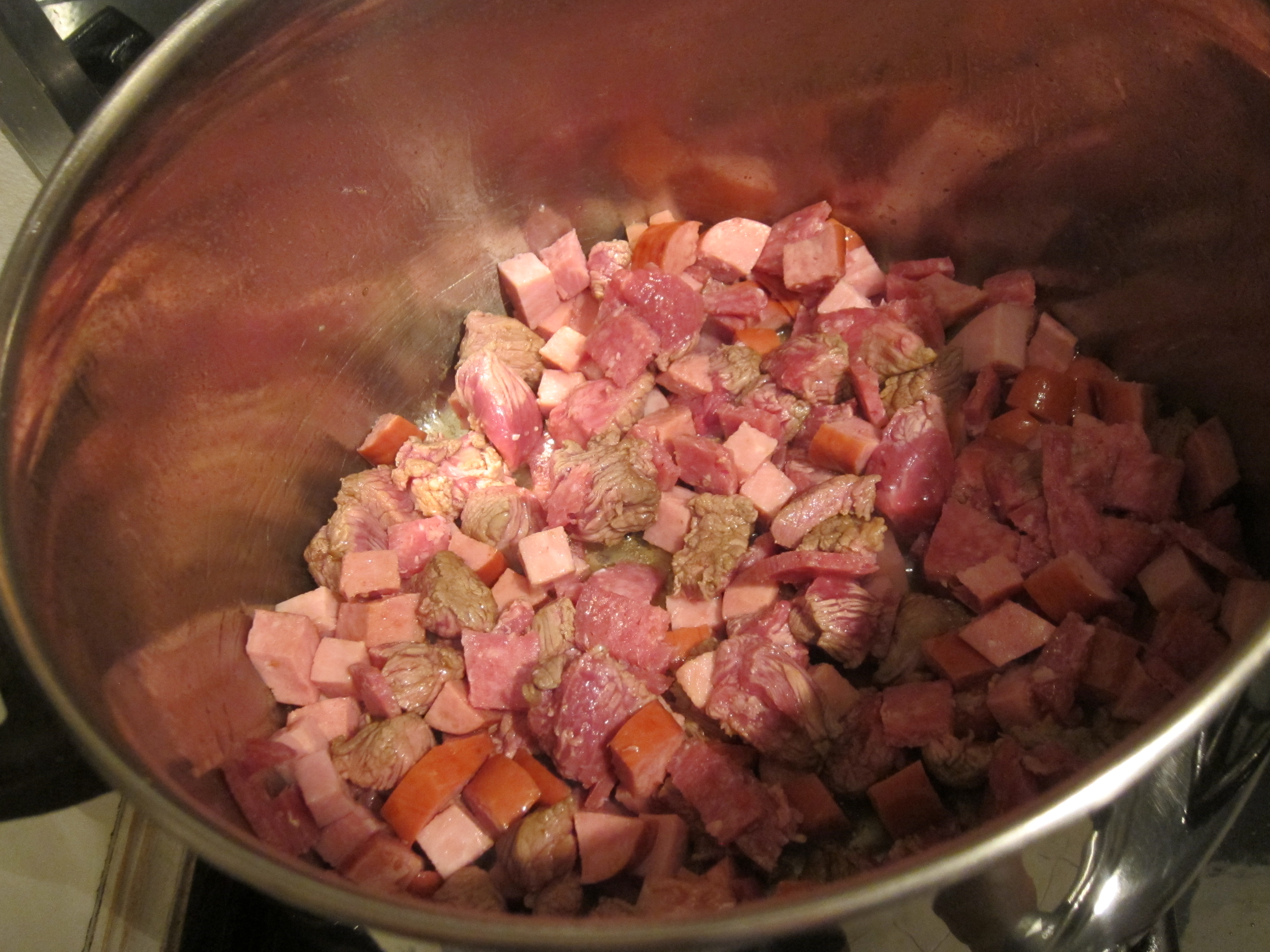 Once that was browned, in went the onions and celery. 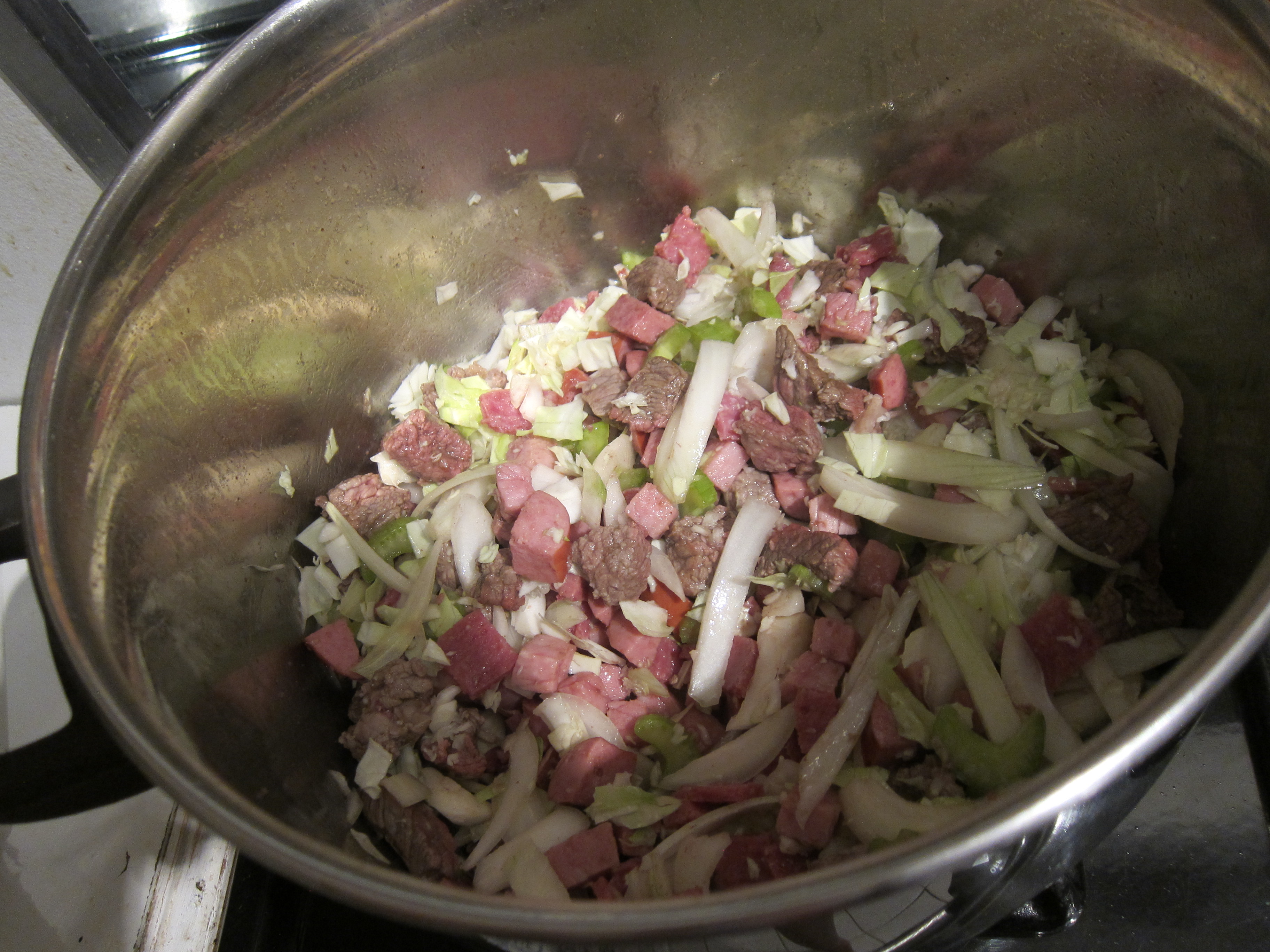 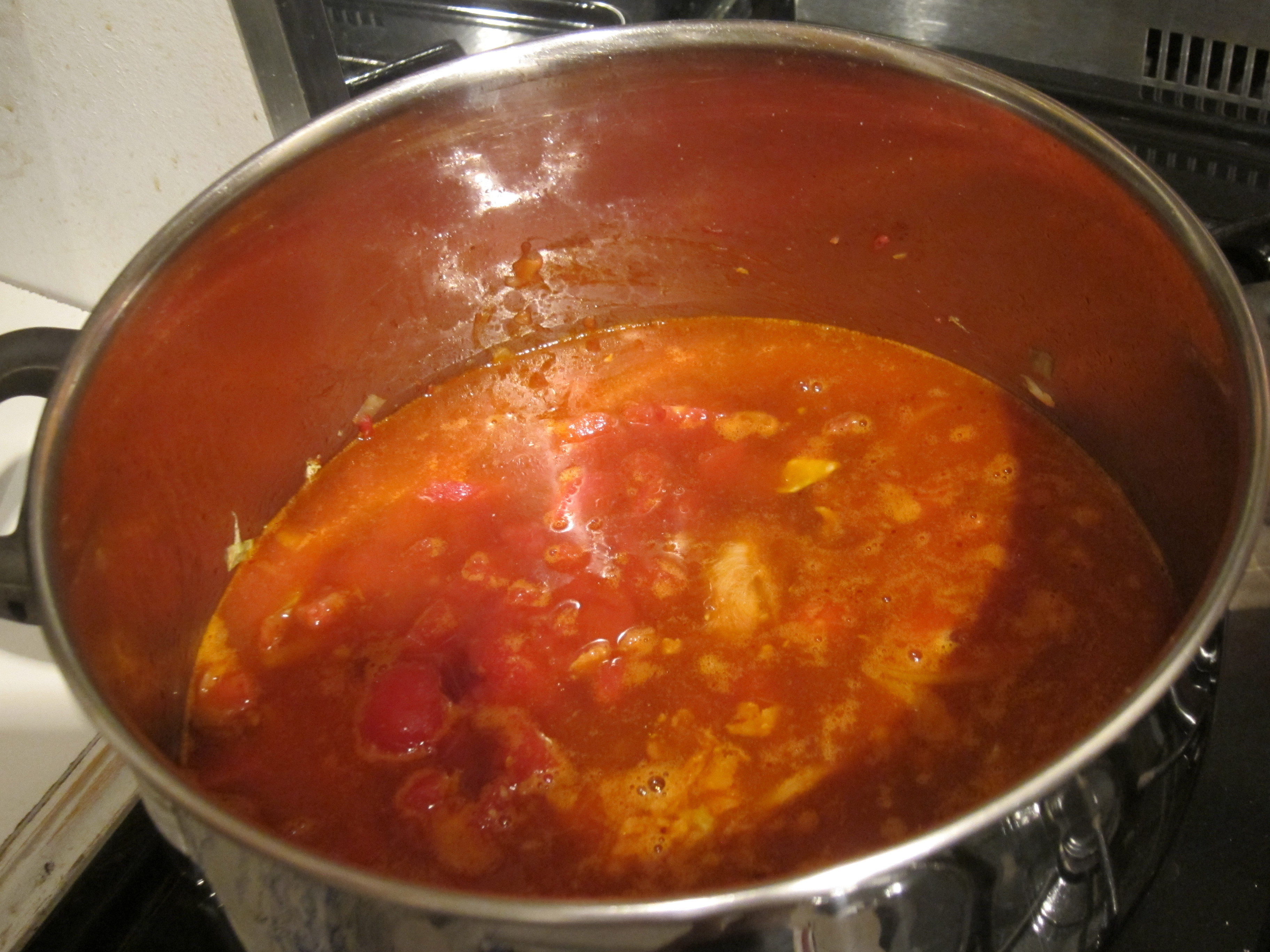 … and then came my favorite part: capers and pickles. These two things are just about my favorite ingredients in the world. I’m a big fan of the sour and tart. 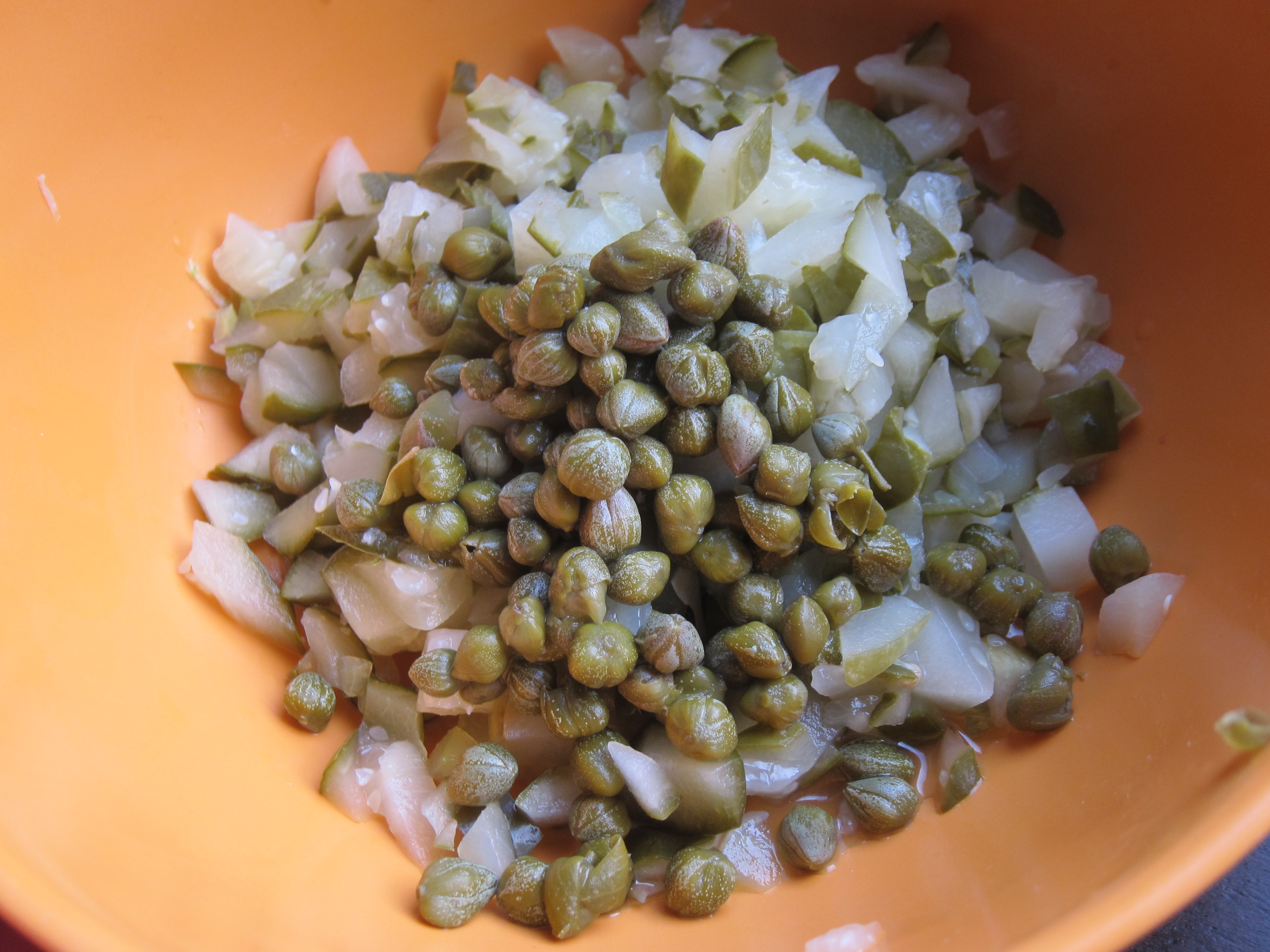 Once that’s all boiled for a while, stir in sliced lemons, sugar, salt and pepper and you’re ready to go! 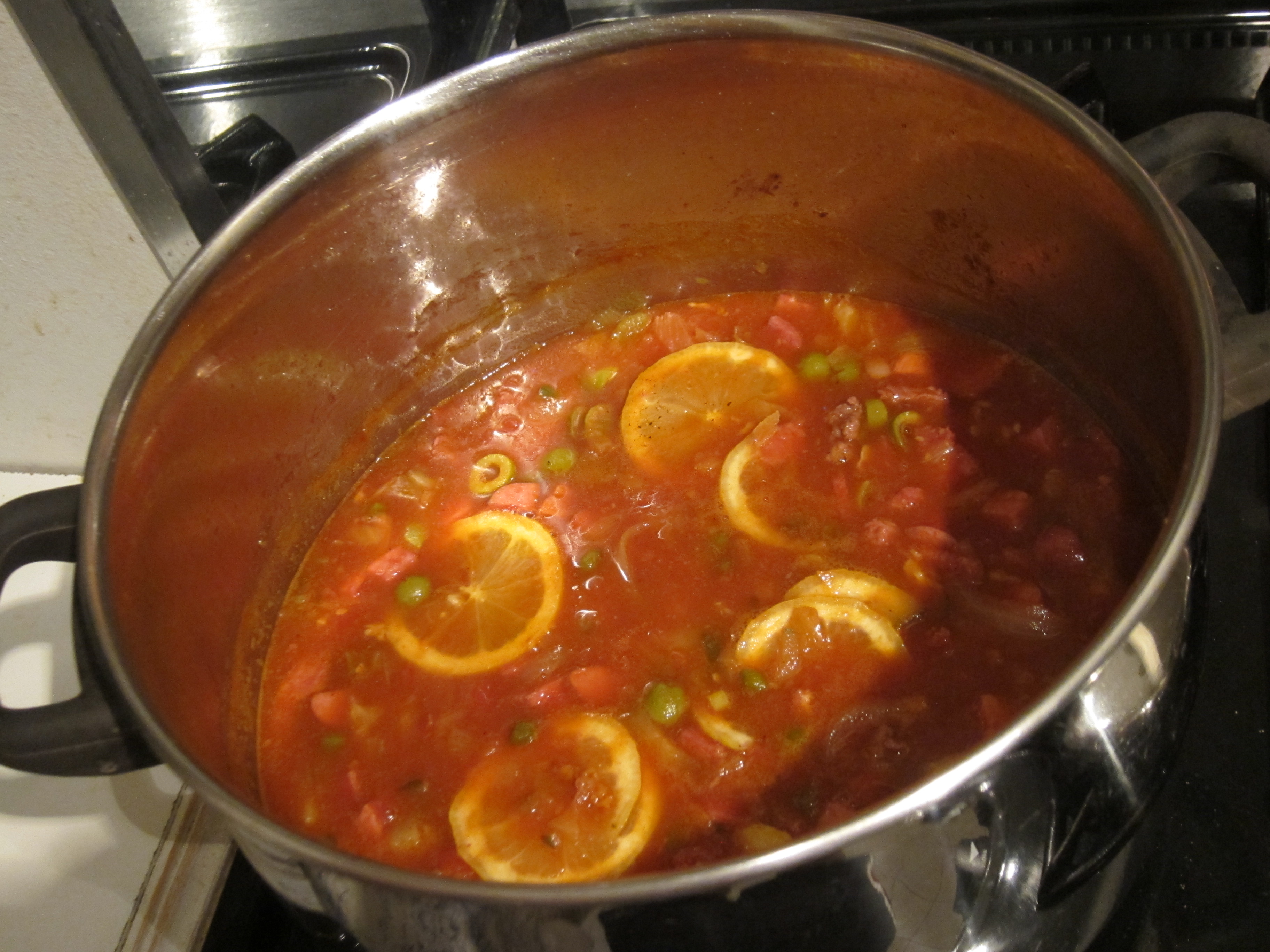 How was it? Out of this world. (And I don’t mean that lightly.)

Each spoonful came with meat of some sort wrapped in comforting tomato flavors. And though the soup was incredibly hearty, the tartness of the capers, pickles and lemon cut through and made sure there wasn’t any heaviness. The creme fraiche, parsley and scallions mixed in? The perfect cappers.

Just the thing to have in a hot bowl when those figure skaters are on.

Lucy M‘s Russian Tea at A Cook and Her Books

1. Cut beef, kielbasa, ham, and salami into ¼” pieces; set aside. Place peppercorns, allspice, and bay on a piece of cheesecloth and tie into a tight package; set aside.

3. Return bacon to pot with spice package, tomatoes, and stock; bring to a boil. Reduce heat to medium, add pickles and capers; cook until beef is very tender, 40–45 minutes.