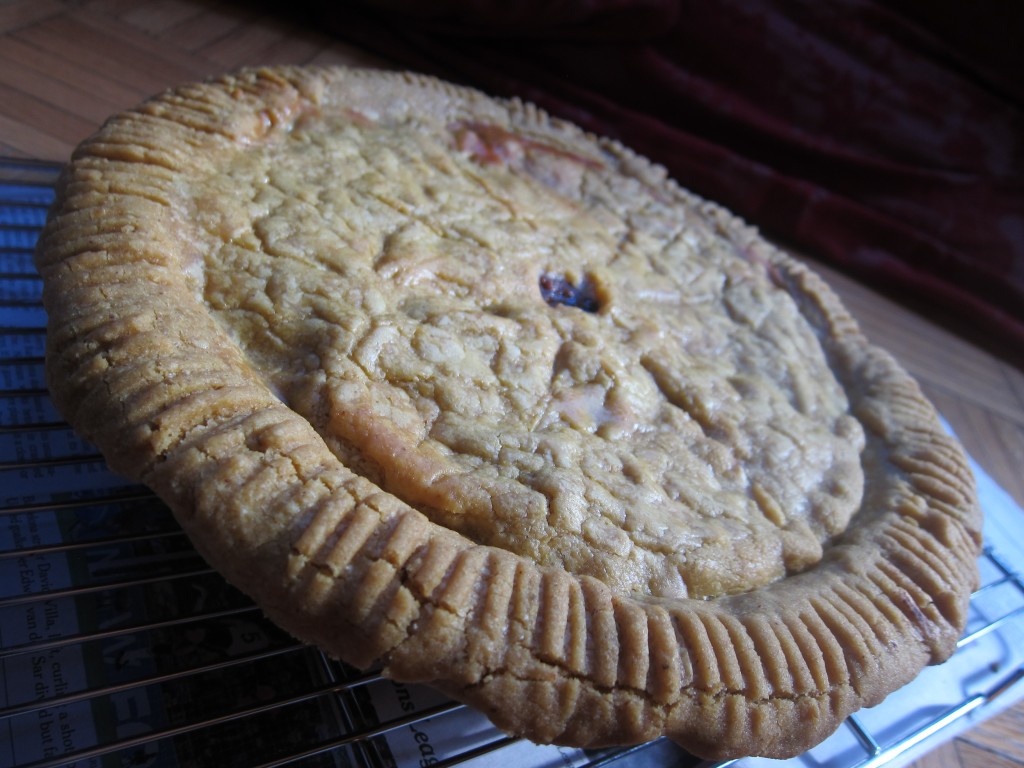 Now, when I first moved to New York, I had the great fortune of living just blocks away from Myers of Keswick, a darling little British provision shop in the West Village that makes its own bangers, Scotch eggs and a variety of pies. Pork pie is always lovely, of course — but the treat that had me popping into Myers at just about every chance I got was a hockey puck-sized pie filled with hearty lamb curry and topped with a crisp lattice weave.

Not wanting to copy Myers whole hog, however, I started to think of my favorite curries and what could possibly make for a good filling — Indonesian beef rendang and Singaporean chicken curry top the list. But I also have a great love for slightly sweet Japanese curries. And a recent chit-chat with Marc from the lovely No Recipes blog sealed my decision when he had me in a reverie over Japanese curries after we spent some amount of time talking about his own curry recipe.

Marc’s recipe turns out to be pretty easy — I tweaked some of the amounts but it’s really pretty great as is. One tip though — it’s best made the night before so the flavors have time to mingle and deepen.

Once I had the curry done, I set about looking for a good crust for such a pie. There are several Australian and British recipes for curried lamb or beef pies out there — some of them involve adding curry powder to the crust, which sounded like a fantastic idea. With a few such recipes in hand, I set about assembling my pie and within minutes of the pie being in the oven, the amazing smells of sweet Japanese curry and an eggy crust started filling my apartment.

This being my first curry pie, I certainly wasn’t expecting perfection. Good thing, too, because some things certainly could stand improving — the crust, though delicious, was far too crumbly and didn’t hold together well once slices were cut. Overall, however, the tastes worked well together — the sweet meaty filling paired with the slight spice from the crust was delicious. 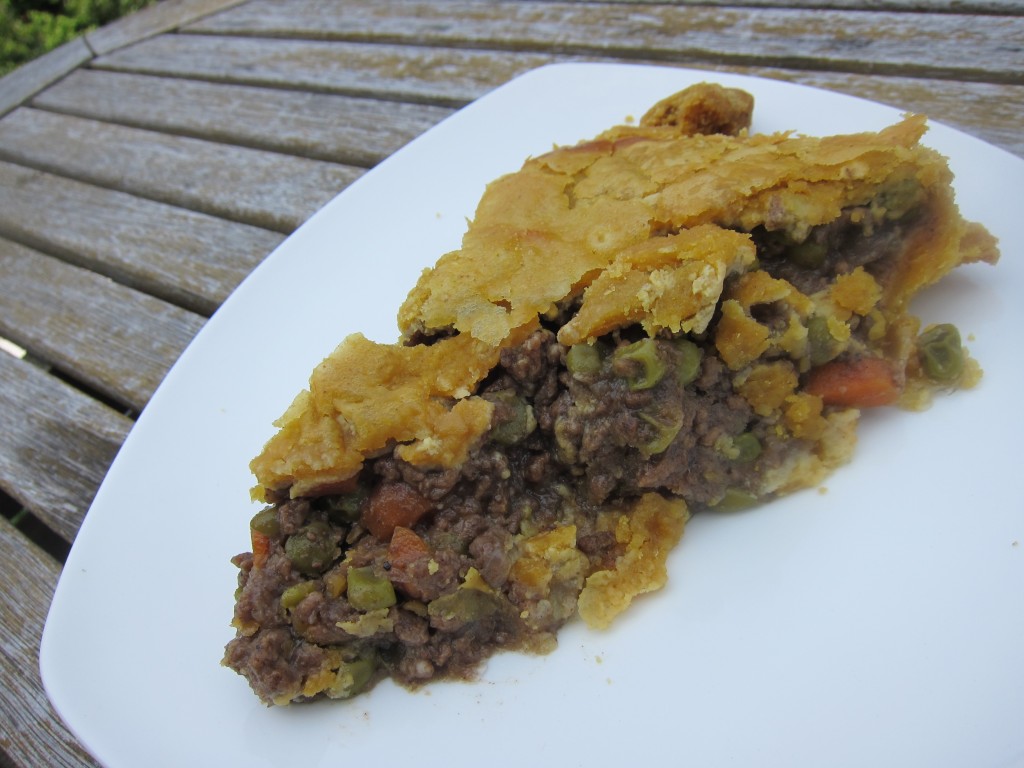 The next time I make it, I may try a different crust. (If anyone has suggestions, I’m all ears.)

But as first stabs go, this curry pie wasn’t bad. In fact, with a little salad on the side, it makes for the perfect summer lunch.

Anastasia‘s Strawberry Pie in Jars at Can It You Nit!

Danielle‘s Chicken Pot Pie at Beyond The Plate

(Curry recipe adapted from No Recipes.)

Heat the oil in a large saucepan over medium low heat and add the onions. Saute the onions until they are golden brown and caramelized (about 30 minutes). Turn up the heat to high, add the ground beef and brown.

Add the carrots, and the water then bring to a boil. Skim off any foam or oil that accumulates at the surface then lower heat to medium and add the peas, pureed apple, salt and garam masala. Simmer for about 30 minutes or until you can pass a fork through the carrots and the meat is tender.

For the roux, melt the butter over medium low heat. Add the flour and garam masala, stirring until you have a thick paste. Add the cayenne pepper and some fresh ground black pepper and incorporate into the roux. Add the ketchup and tonkatsu sauce and combine. Continue to cook until the paste starts crumbling. Remove from heat and set aside until the meat and veggies are ready.

To make the curry, just laddle about 2 cups of liquid into the roux then whisk until it’s smooth. Pour this mixture back into the other pot and gently stir until thickened. Heat through.

To make crust, mix together flour, salt and curry powder in a bowl until thoroughly combined. Cut in the shortening with a pastry cutter until the mixture resembles coarse crumbs. Sprinkle with water, and stir gently until the dough just comes together. Divide into two even portions, form each into a ball. Place each ball on a floured work surface, and roll out into a crust to fit the pie dish. Lay one crust over the dish and trim. Freeze crust in dish and the second rolled-out crust for 30 minutes. Take crusts out of freezer, add about five cups or more of curry into the dish, place rolled-out crust over the dish, crimp it to the dish with a fork, and cut several slits in the top of the crust. (Optional: Lightly brush the top with a beaten egg.)

Bake in the preheated oven until the crust is golden brown and the filling is hot, about 35 minutes. Let cool 7 to 10 minutes before serving.