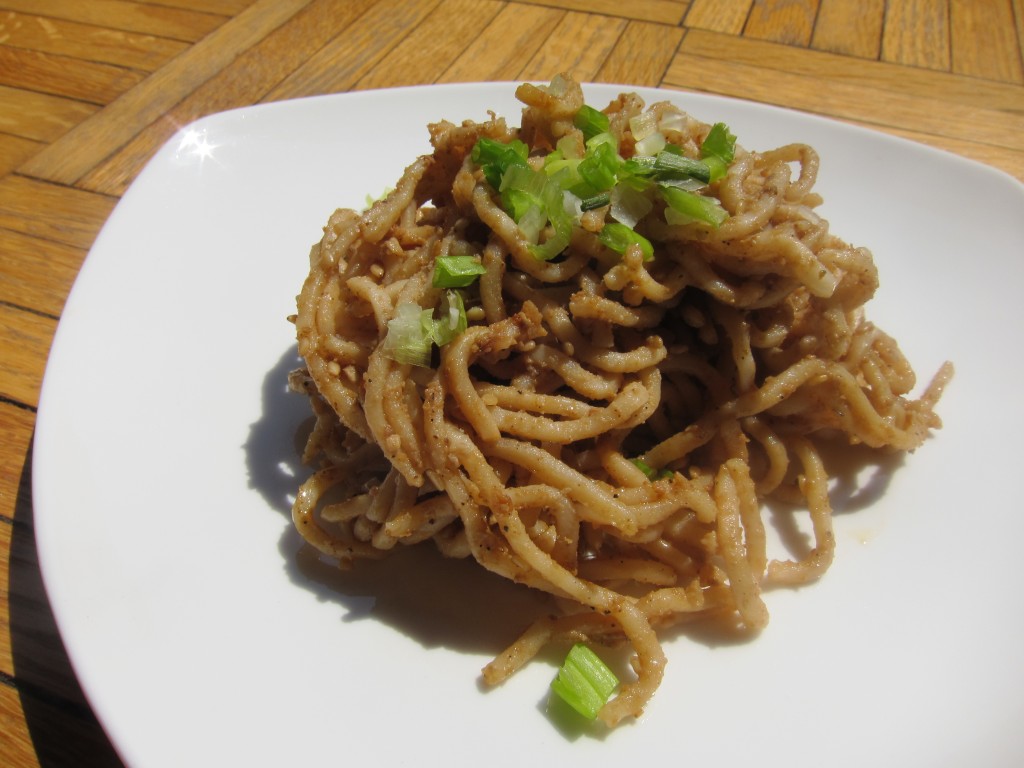 If Achilles had ever cooked, I’m convinced noodles would have been his heel.

Getting noodles — especially Asian-style noodles — just right has always been a bit of a mystery to me. In fact, nailing the consistency of noodles — just a smidge over al dente — is so daunting that I tend to avoid making pad thais and Southeast Asian mee gorengs at home. (My first pad thai attempt years ago, after all, resulted in me using chopsticks to pull apart gummy ropes of noodles that had been welded together into a mound. I’ve never tried to make this dish again.)

After a recent lunch at a Sichuan restaurant in New York where I had a fiery and ginger-speckled dish of spicy chilled sesame noodles, however, I simply couldn’t stop thinking about them.

So when my Let’s Lunch group of bloggers around the world who gather for a monthly lunch date suggested making cold entrees for August, I decided to get back on that horse …

To start, there are numerous recipes for spicy Sichuan noodles floating around the Internet. After looking at about a dozen, I took a little bit from each of a few and pieced my noodles together.

Now, the backbone of this recipe is New York Times restaurant critic Sam Sifton’s  “Takeout-Style Sesame Noodles” recipe — but I added a few other ingredients and doubled the amounts for the fixings after noticing that several Chinese home cooks (including a woman who grew up in Sichuan) tend to use about that amount of flavoring in their noodles.

And how did my noodles taste? Not as delicious as my lunch at Famous Sichuan — although I suspect those cooks have had far more notches on their noodle-making belts than I have.

But served chilled with a tall glass of iced Oolong tea, my Sichuan noodles made for the perfect summer lunch. Each bite was laced with a hint of Sichuan pepper powder, slick with the earthy combination of sesame paste and peanut butter and had a delightful crunch from toasted sesame seeds. I’d eat these any hot summer day — in fact, I made such a large batch that I did just that for almost a week. My one beef with it was that it could probably have been a little oilier — I may up the amount of oil I add the next time.

The one thing this experience made me feel, however, was regret. I had been too chicken to fathom making these noodles before. Well, never again. I’m already plotting the next Asian noodle adventure in my Brooklyn kitchen…

Mai‘s Strawberry Soup at Cooking in The Fruit Bowl

Victor‘s Seafood Napoleon at The Taste of Oregon

Bring a pot of water to boil then add noodles and cook for about five minutes. Drain and run cold water through the noodles and toss with a little bit of sesame oil.

Combine the rest of the ingredients in a bowl, whisking to mix them well. Pour gravy over noodles and toss. Serve chilled.