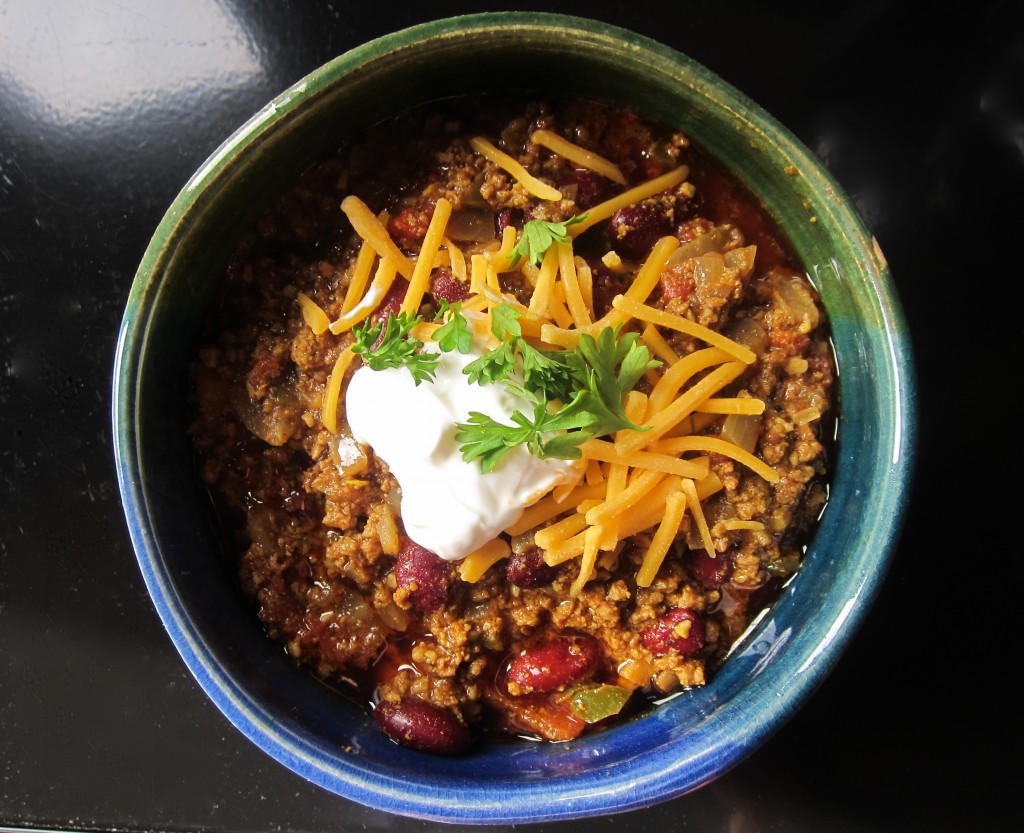 There is a great deal of passion for chili in our hardy little lunch group — three bloggers have strong Texas connections (the fabulous Cowgirl Chef in Paris, cookbook author/editor Joe Yonan in Washington, D.C., and the saucy Hot Curries and Cold Beer in Texas) and everyone else seems to think they have the best recipe for chili. (Some, apparently, have some credence to this claim, having almost won state championships and all.)

I admit to having absolutely no chili cred — I just know that I love the stuff, and that I love (most of) the versions I’ve made.

For Let’s Lunch, though, I decided to try a little twist on the beef-and-beans chili recipe I’ve been using for years.

Chili always makes me think of one of my favorite Indian dishes: keema mattar, a spicy minced lamb stir-fry that’s packed with garam masala, turmeric, coriander, cumin, gobs of ginger, garlic, onions and capped with peas and cilantro. It’s wonderful over rice — with a slightly runny fried egg on top drizzling yolk all over the place — and, like chili, is a dish that just gets better over time as the flavors mingle and deepen.

And so I gave it a whirl. In went the chopped red onions, garlic, jalapenos and ginger and off we went. 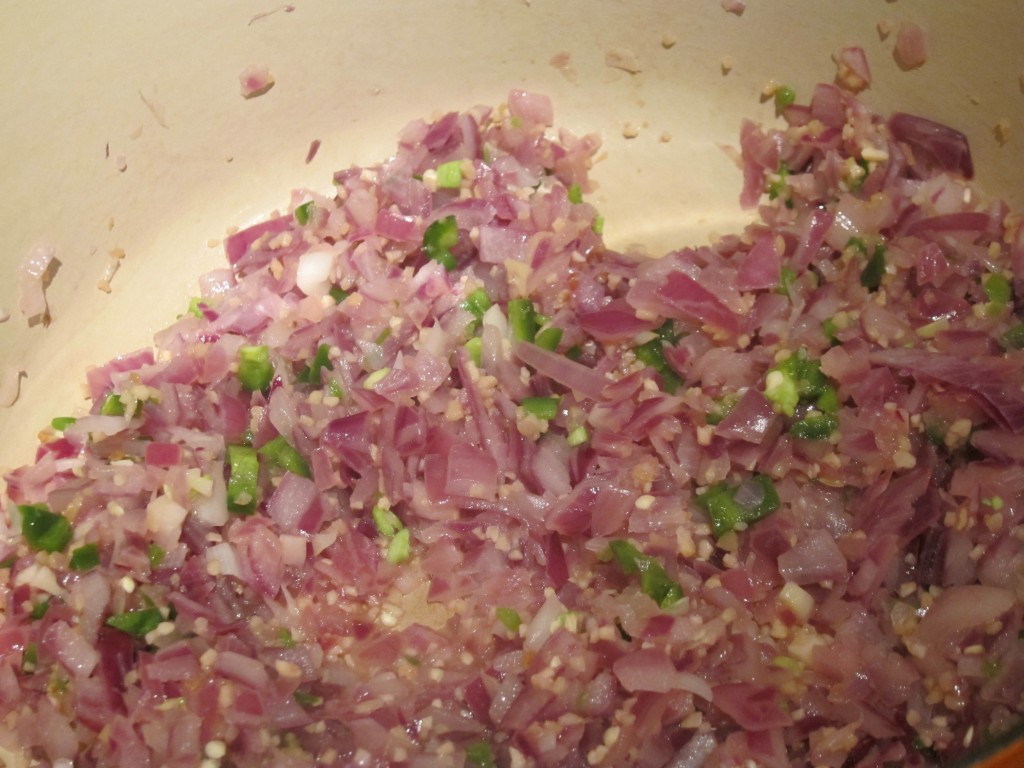 With regular chili, I typically use a U.S. chili powder — for this chili, though, I pulled out the chili powder I use for spicy Southeast Asian stir-fries and curries. This one is from Singapore but you can find versions of it in Asian stores here. Its color is rather different from the chili mixes you’ll find in American groceries — it’s bright orange. And it’s very very spicy so, be warned. 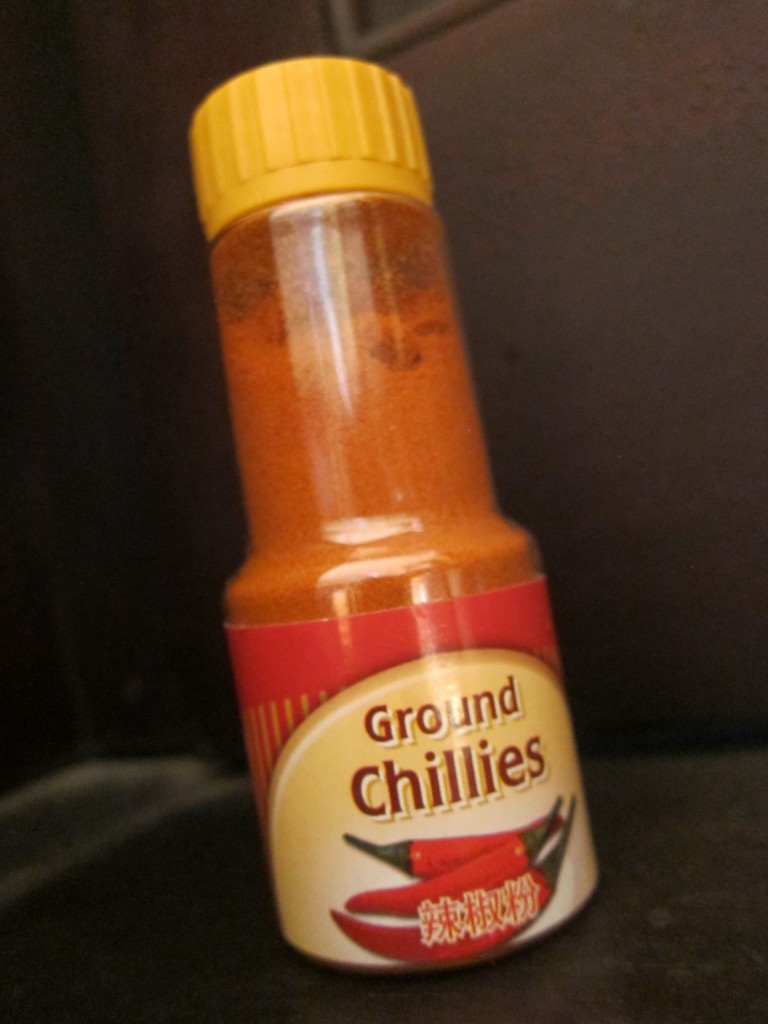 How did it turn out? I omitted the peas because it just didn’t seem right in chili and loaded up my basic chili recipe with the complex flavors of keema.

Paired with sour cream, shredded cheddar and topped with bits of cilantro, this keema chili hybrid tasted delicious — like eating curry, but a minced lamb version, made all the more creamy and rich with the addition of sour cream and cheddar. The sous chef said it reminded him of Cincinnati chilis, which include spices such as cinnamon and cloves and can be on the sweet side — except that this had the added layer of fiery heat that stepped it up a notch.

So, take THAT, Let’s Lunchers! I think we have a winner here.

Emma‘s Dave’s Chili at Dreaming of Pots and Pans

Leigh‘s Cincinnati Chili at His With Hers

(Based in part on an Epicurious chili recipe)

Heat oil in heavy large pot over medium-high heat. Add onions; sauté
until brown, about 6 minutes. Add jalapeños, ginger and garlic; sauté 1
minute. Add lamb; sauté until brown, breaking up with back of fork,
about 5 minutes. Add chili powder, cumin, coriander, garam masala, turmeric, cinnamon and paprika, then mix in tomatoes with juices, beans, and broth; bring to boil. Reduce heat and simmer until chili thickens and flavors blend, stirring occasionally,
about 45 minutes. Skim any fat from surface of chili. (Can be made 2
days ahead. Cool slightly. Refrigerate uncovered until cold, then
cover and keep refrigerated. Bring to simmer before serving,
stirring occasionally.)