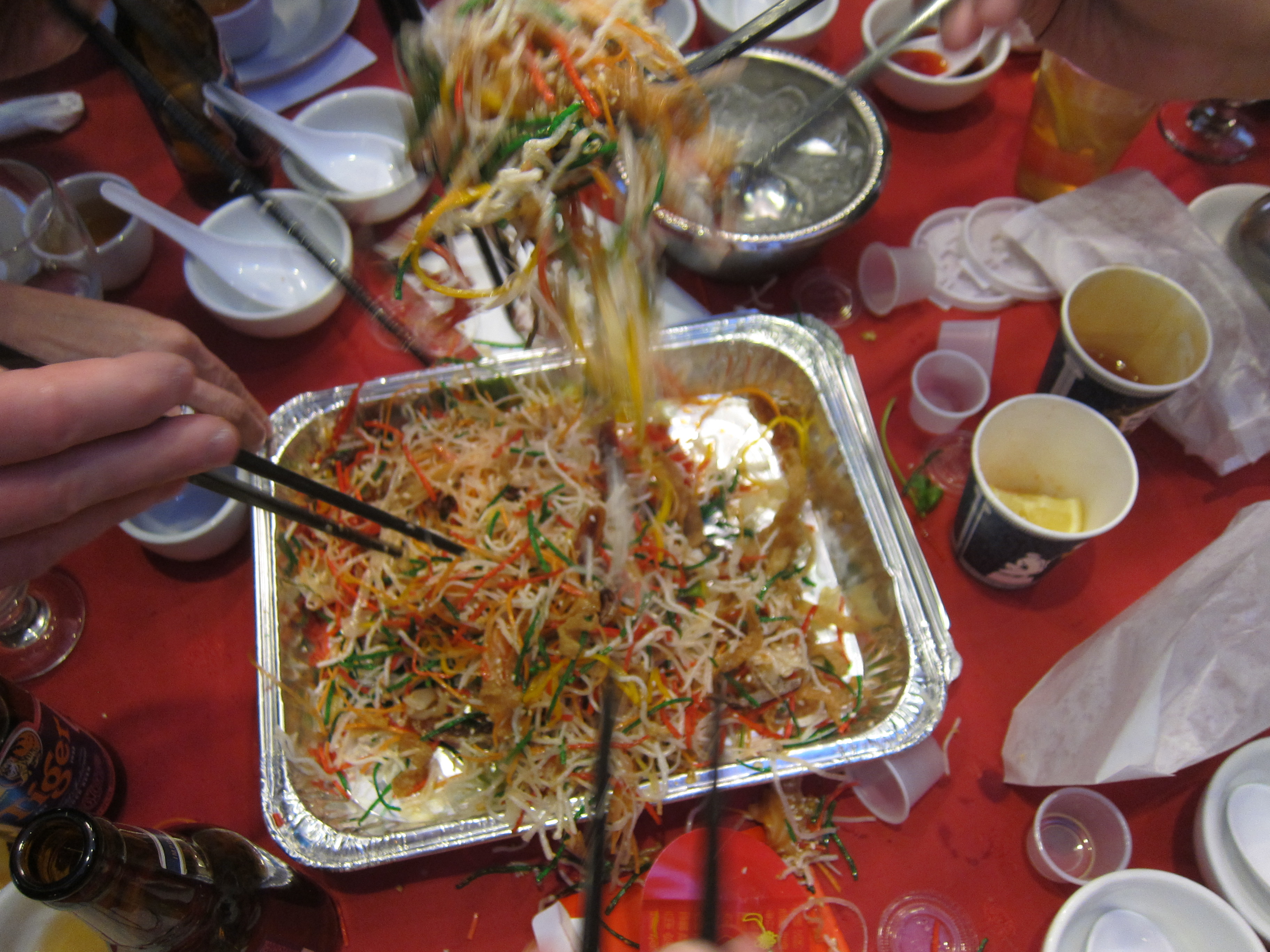 Since this wasn’t just any Chinese new year dinner but one organized by the New York Singapore Association, there was a spread of Singapore baked goods and snacks to kick off the evening.

I ignored most of the offerings — a 10-course dinner lay before me, after all — but couldn’t resist the homemade pineapple tarts. I’d been craving them for days — if you’ve been following this blog or have read “A Tiger in the Kitchen,” you’ll know that I feel incomplete if I’ve gone more than a few months without having these treats cross my lips.

These buttery cookies topped with cinnamon- and pandan leaf-scented pineapple jam are a major Chinese new year offering in Singapore. Because pineapples are gold, these cookies are seen as very lucky. Also, they’re pretty darn delicious.

Having been bereft over not having any tarts this year, the sight of these almost made me cry. (They were mighty tasty, too — or as my people say: “Shiok!”) 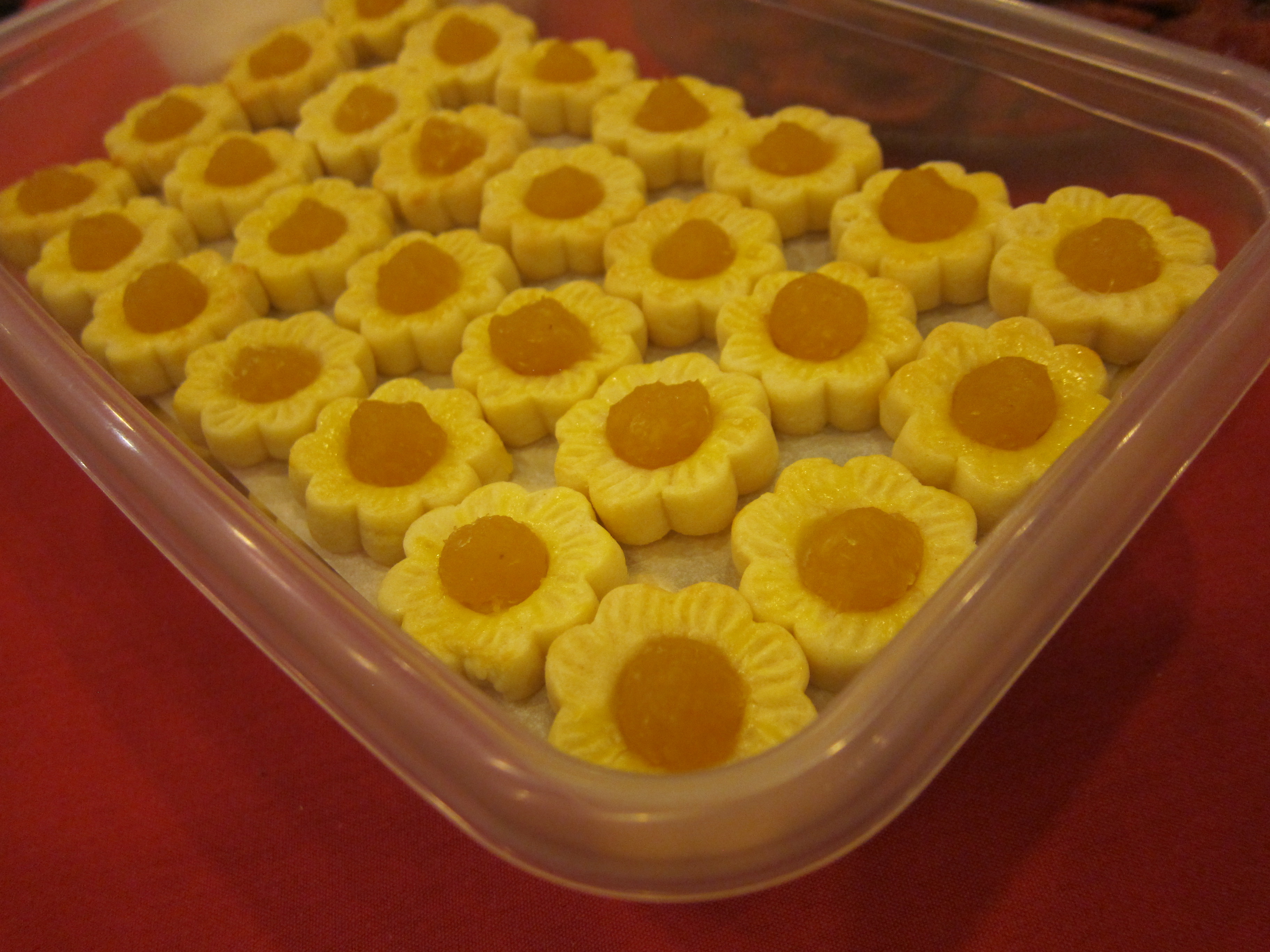 The meal began with another Singaporean tradition — yu sheng, a salad of raw fish and more than 10 other ingredients, each of which symbolizes an aspect of luck or good fortune for the year. Chopped peanuts, for example, represent gold ingots; plum sauce is supposed to forecast sweetness for the year ahead. (I explain all this a little more in “A Tiger in the Kitchen.”) 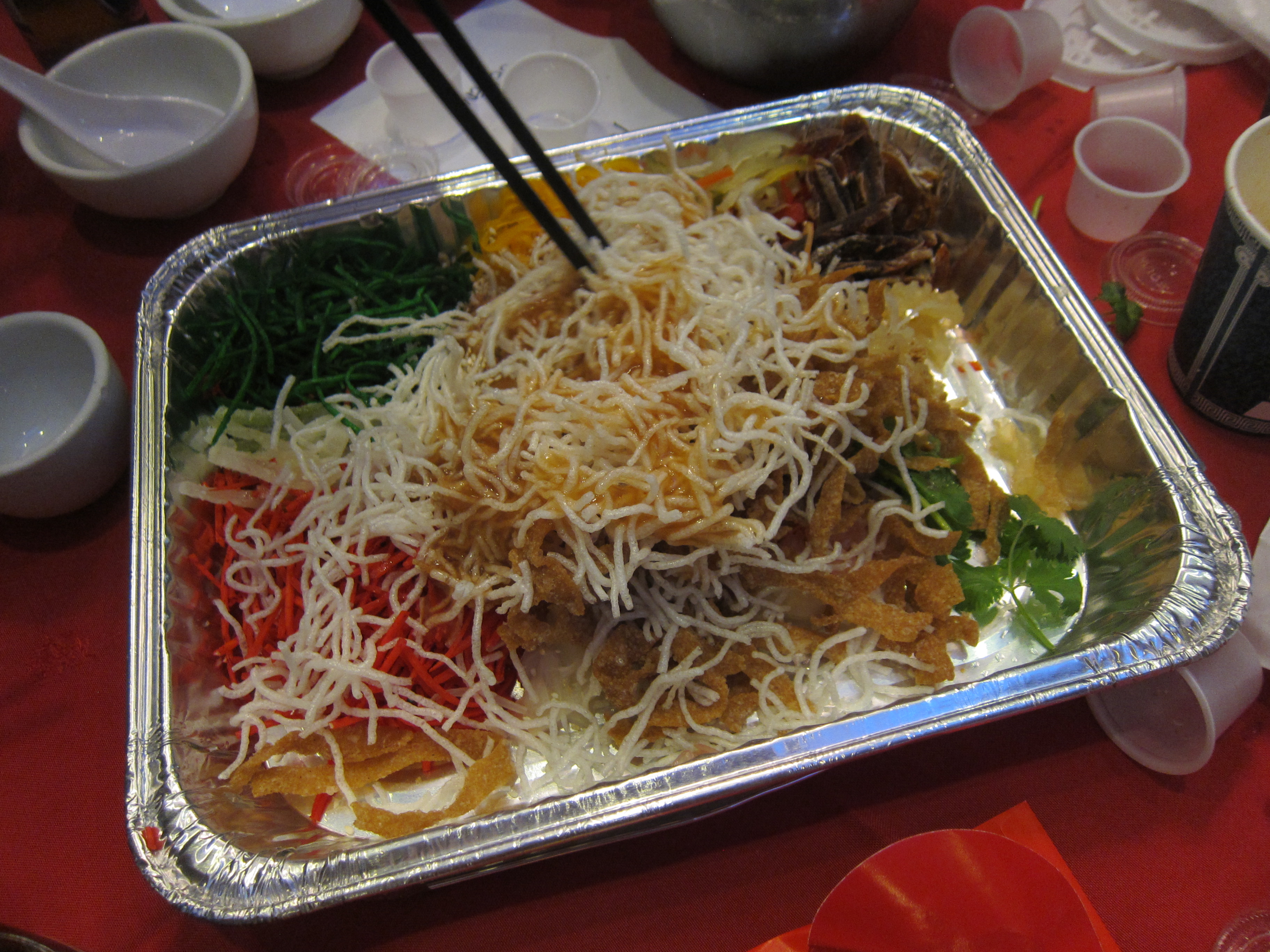 As you add each ingredient, you’re supposed to shout out the cheng yu (old Chinese saying) that conveys this wish. When adding the plum sauce, for example, you’re supposed to announce “Tian tian mi mi,” which means “sweet as honey.” When the raw fish goes in, you yell “Nian nian you yu,” wishing you wealth for the year. (The Chinese word for “fish” is a homophone for “wealth.”)

Since my table was filled with a rather untraditional lot — and none of our parents were around to say each chengyu — we had to look up all of these on our iPhones as we went along. 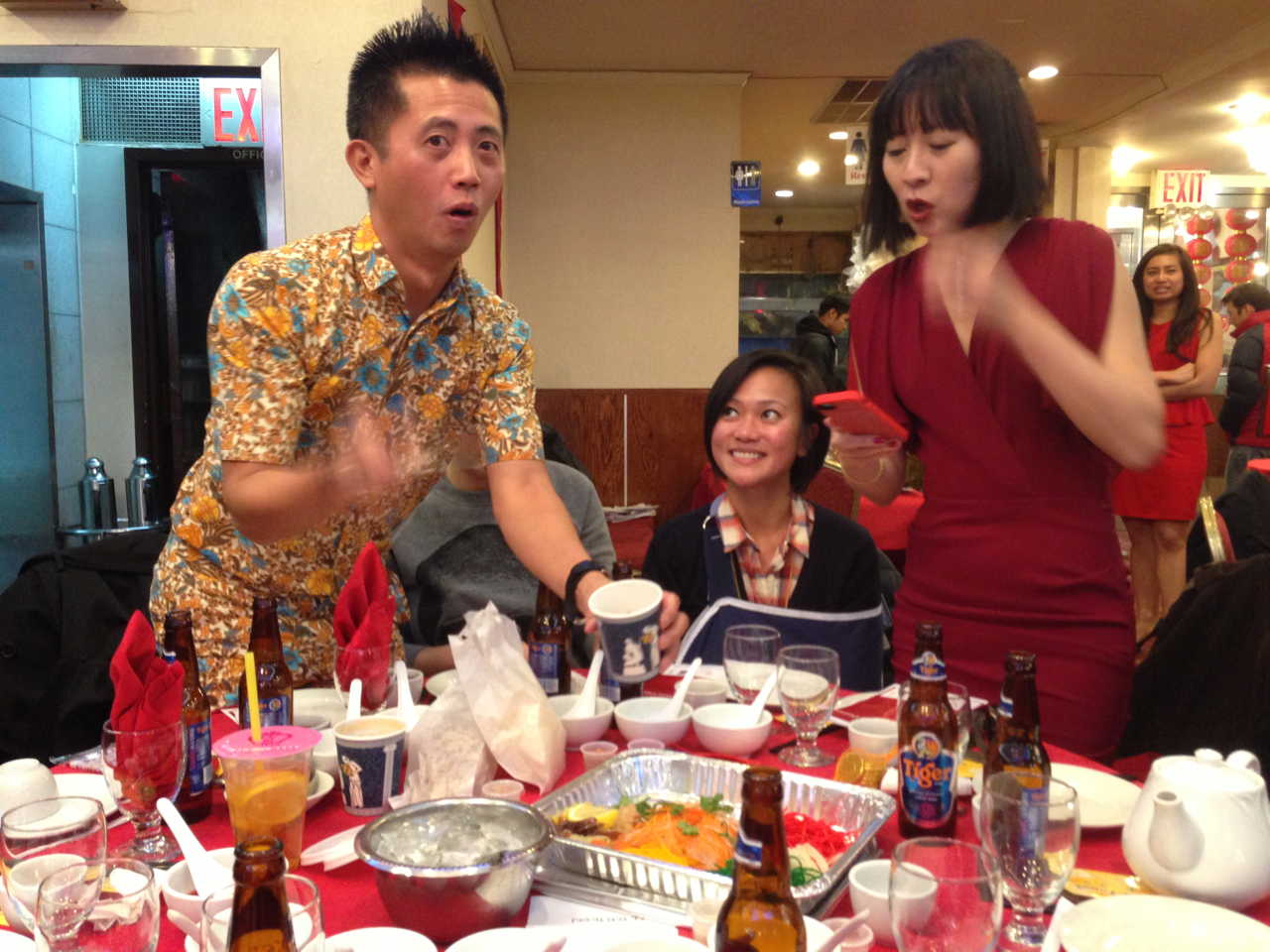 Once all of that was done, everyone stood up, gathered around the table and tossed the salad up with their chopsticks, flinging the food as high up as we could. The higher the salad went, the greater our success and luck would be in the coming year.

After that, we were onto the rest of the 10-course meal.

Now, I’d never been to Royal Seafood before — it did get an OK review in the New York Times in December. (The article noted that the restaurant’s co-owner and chef Kendy Cheng is from Hong Kong — land of amazing food.)

Our meal, however, was not amazing. Entertaining and thoroughly delightful yes — and certainly not terrible for one prepared for 290 people — but there were hits and misses among the dishes. 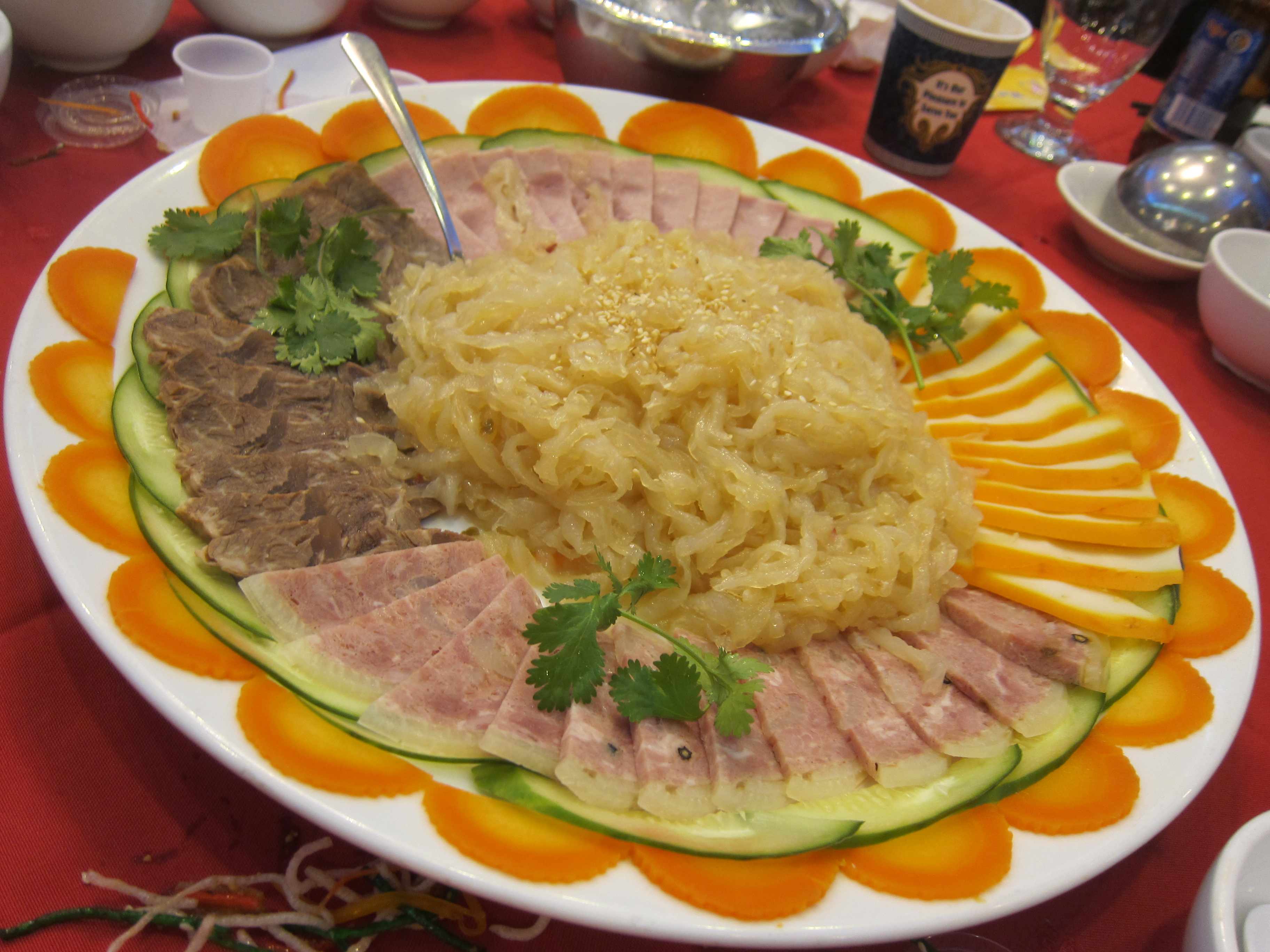 We were excited about the scallops with XO sauce — only to not detect much or any XO sauce in the dish. When we asked our waiter about it, he said the XO sauce was coming, that it would be served separately. (Highly unusual for this dish.)

After it didn’t appear, we started eating. Good thing, too — the sauce never arrived. 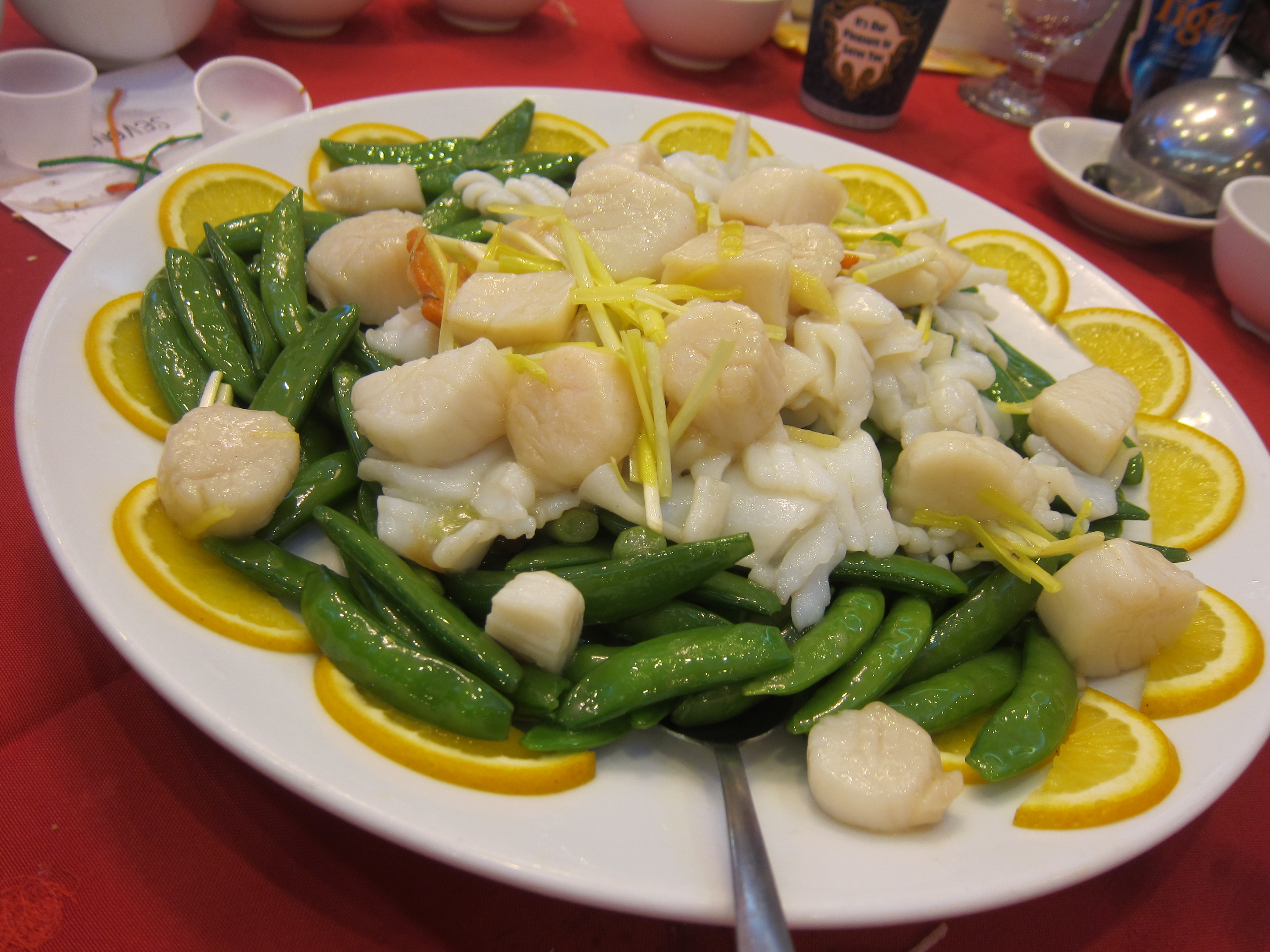 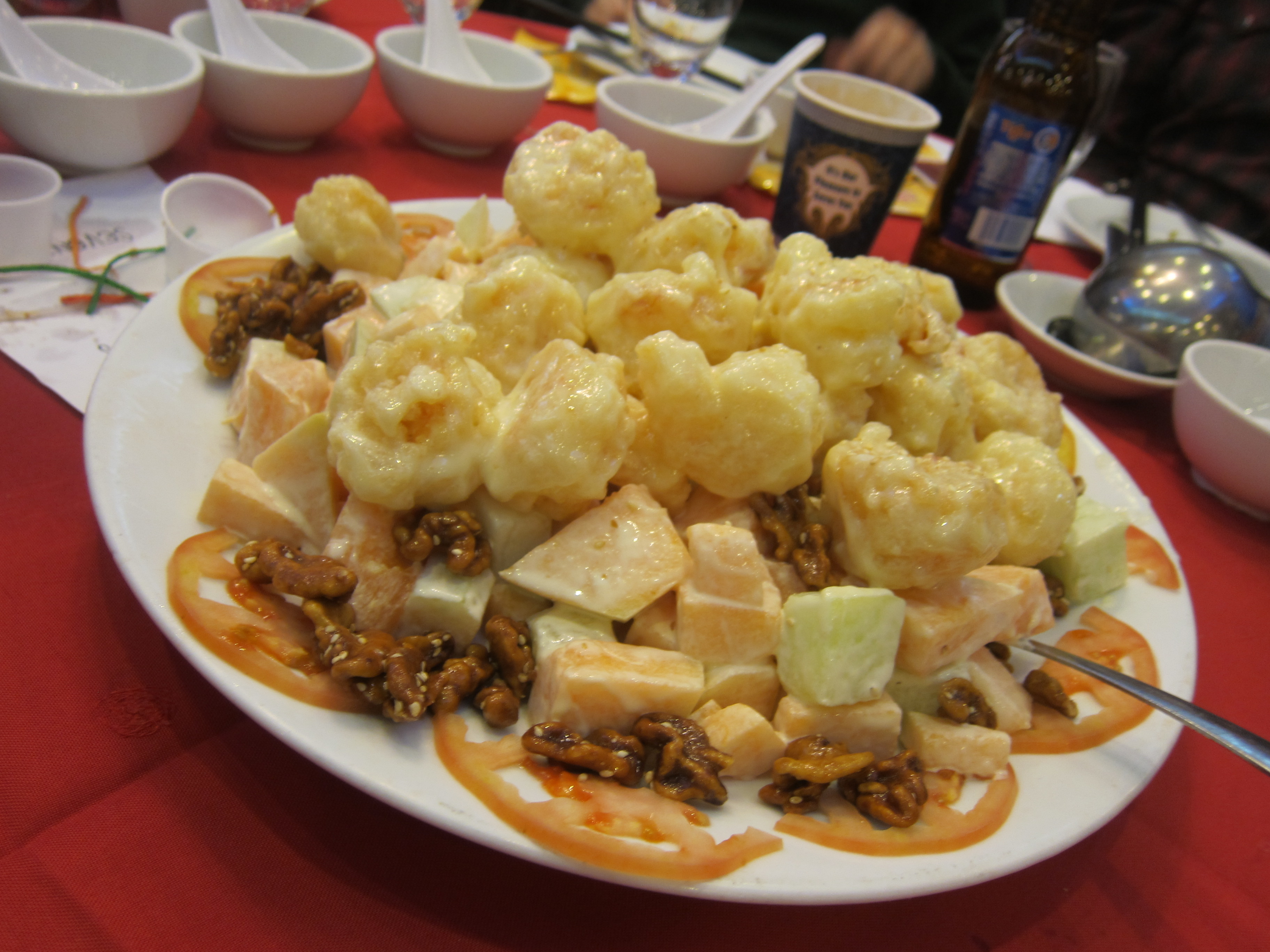 The crab meat soup with dried bamboo shoot was clearly meant to be a substitute for shark’s fin. Even with the addition of a hefty amount of tart red vinegar, the soup largely tasted like watery corn starch. 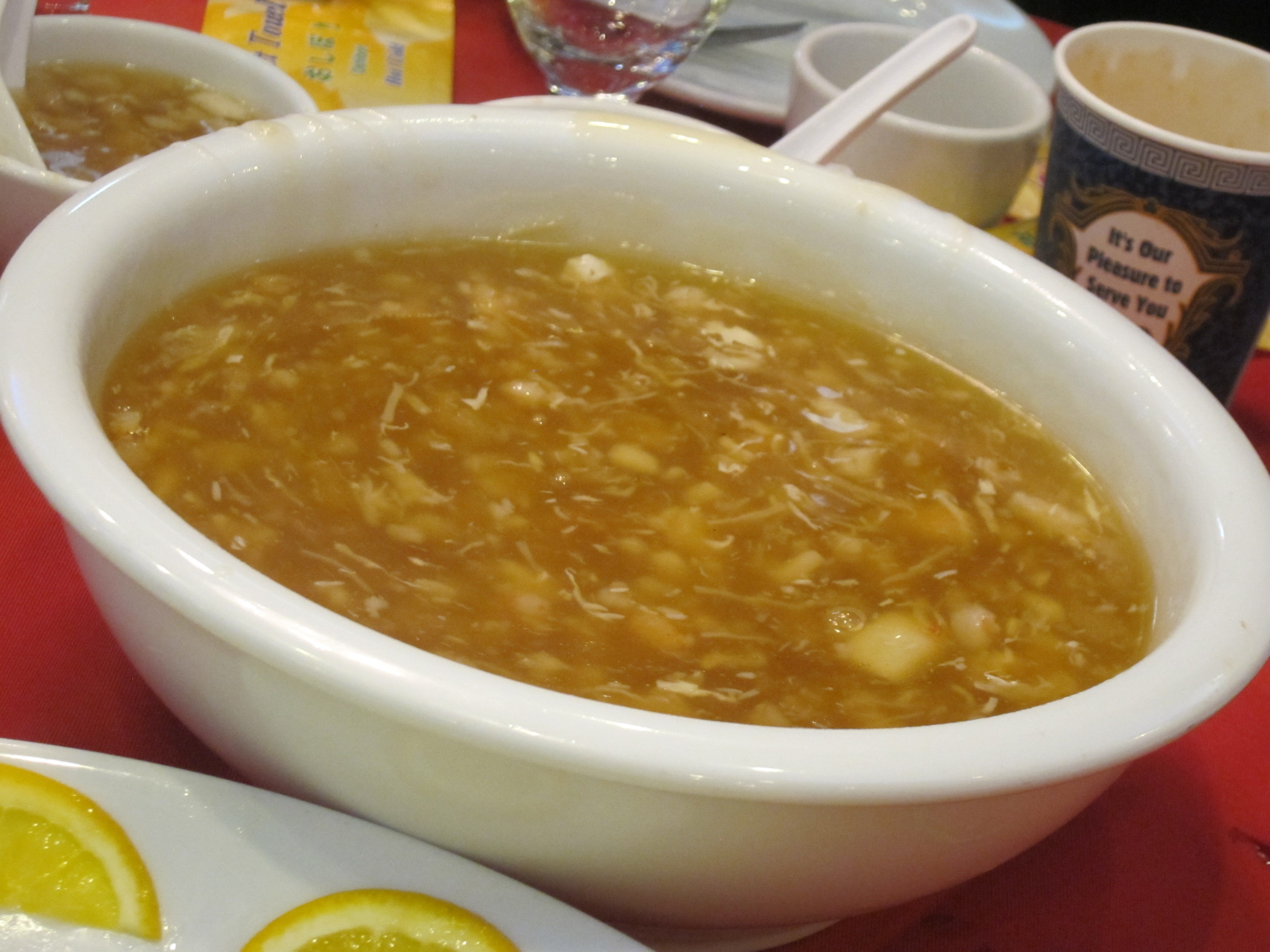 The abalone with bok choy and Chinese mushrooms was nicely done — the vegetables in this dish and the scallop dish, by the way, were just terrific. Very sweet and cooked to just the right amount of crispness. 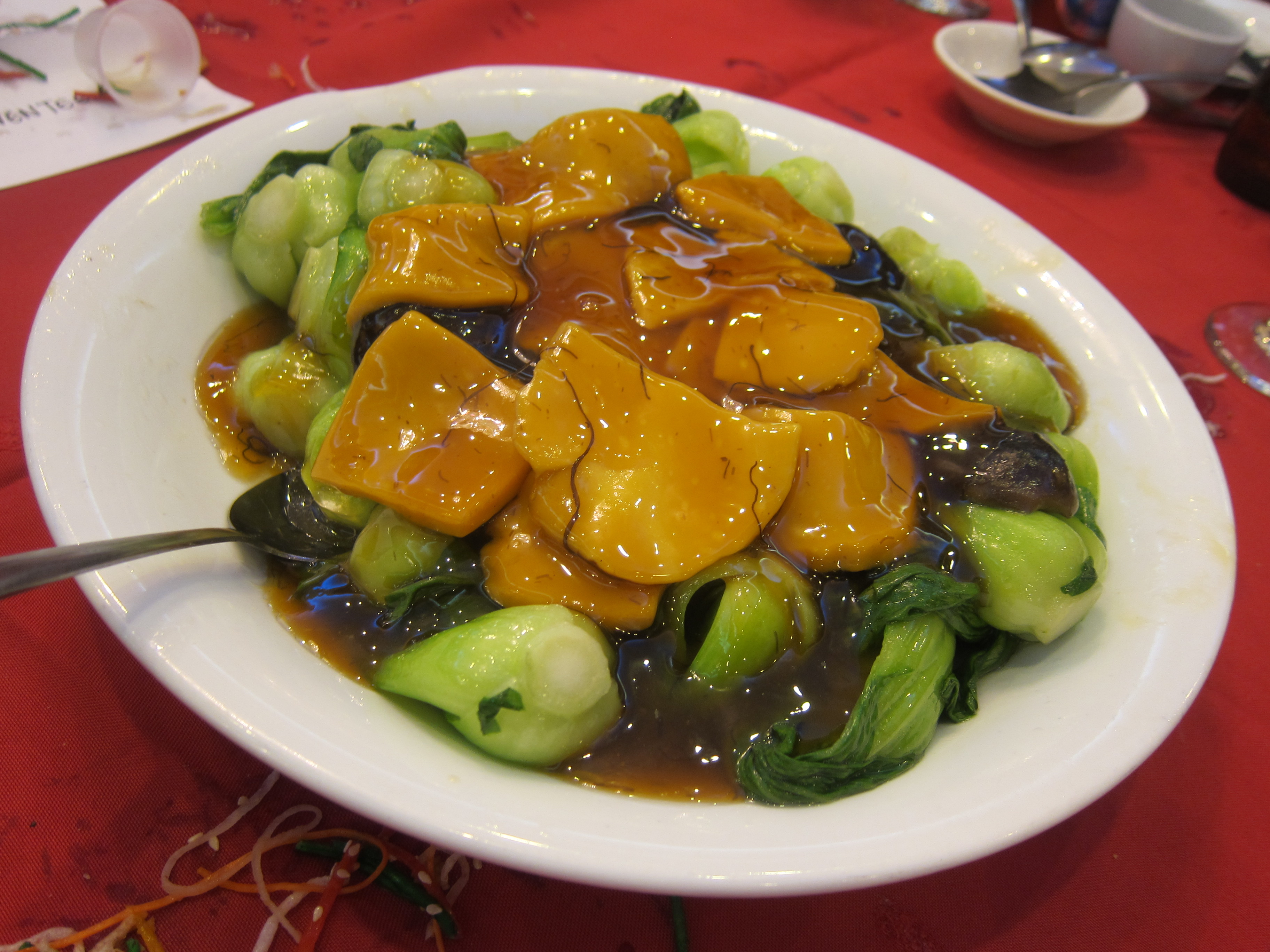 The lobster with ginger and scallion was perfectly fine. Although the lobster is the hallmark of this restaurant, it was not much to write home about. (It had me craving the lobster typhoon at Wong Restaurant, in fact — a lobster dish that comes slathered with a spicy garlic-flecked sauce and peppered with crunchy soy-sauce minced pork.) 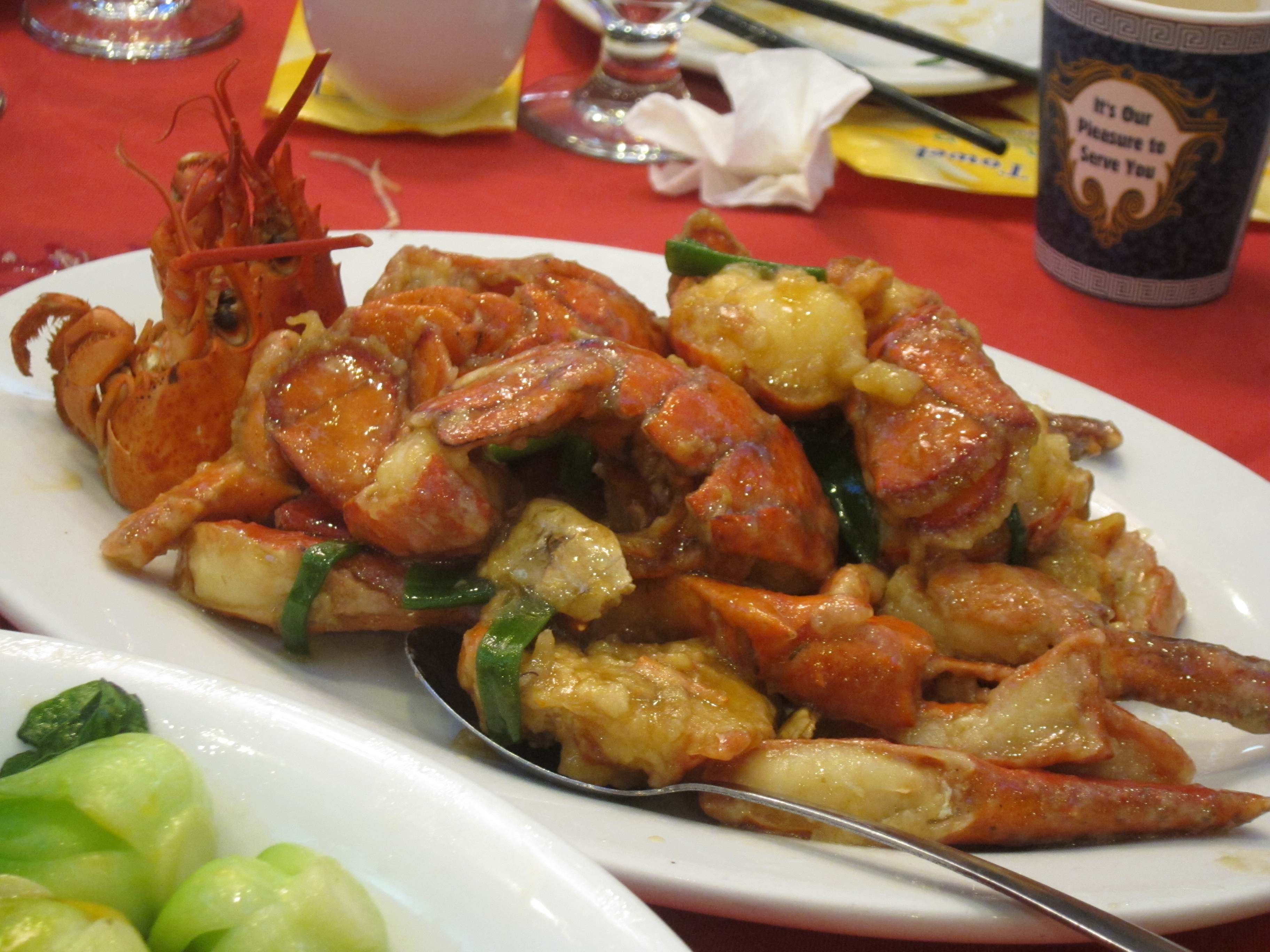 Now the chicken — the least sexy of all the dishes on the menu — blew my mind. Hong Kong-style crispy-skinned chicken is one of my absolute favorite things and this was an outstanding version.

The skin was so crisp it crackled in my mouth like umami chips yet the meat of the chicken was so juicy and tender I felt like I was biting into little pillows.

In Singapore, this dish is served with keropok — a salty prawn cracker. I’m guessing they’re hard to find in New York because we got our chicken with Pringles, which turned out to be not a bad accompaniment. (Everything is better with Pringles, it turns out.) 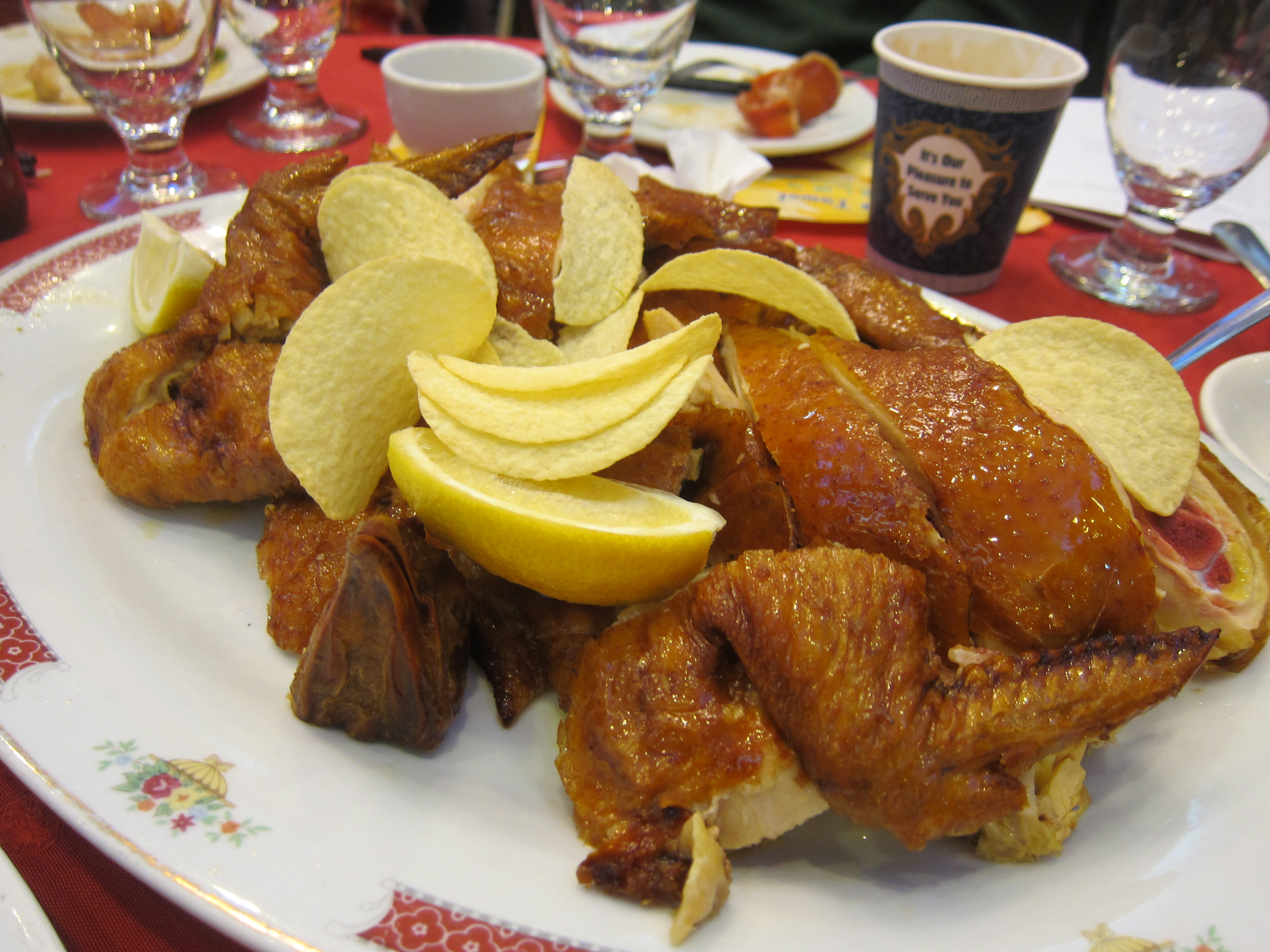 As we were recovering from the chicken, another flavor bomb arrived — steamed fresh fish Shanghai style. This dish was outstanding — the fish was so juicy and tasty and the gingery soy-sauce-fish juice gravy was so delicious I wanted to drink it with a spoon. 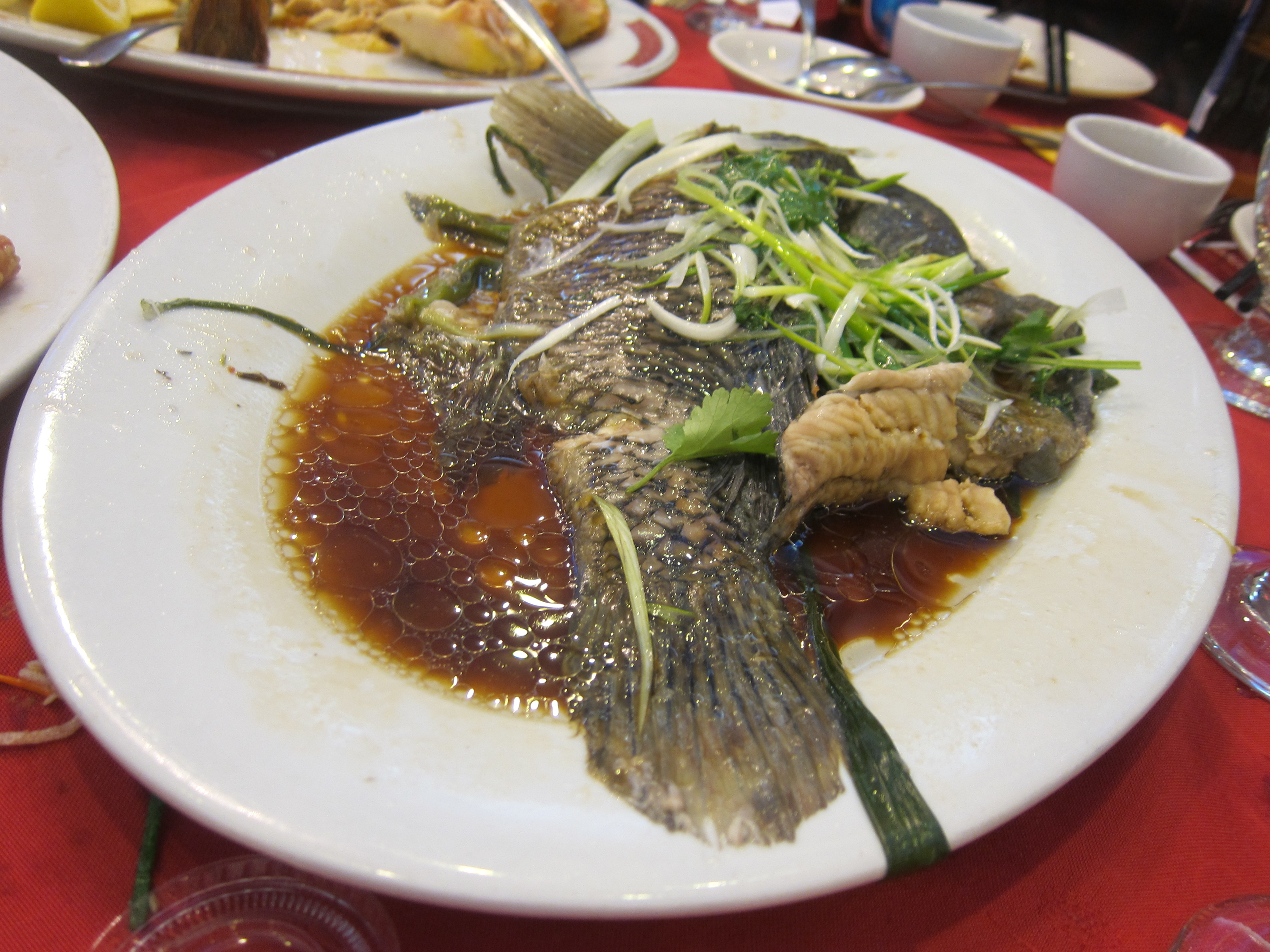 After all that, I didn’t think a basic plate of noodles could wow me but this one did. These stir-fried E-Fu noodles — eaten for longevity — were perfectly al dente, very nicely friend and especially tasty with the fish gravy drizzled over it. 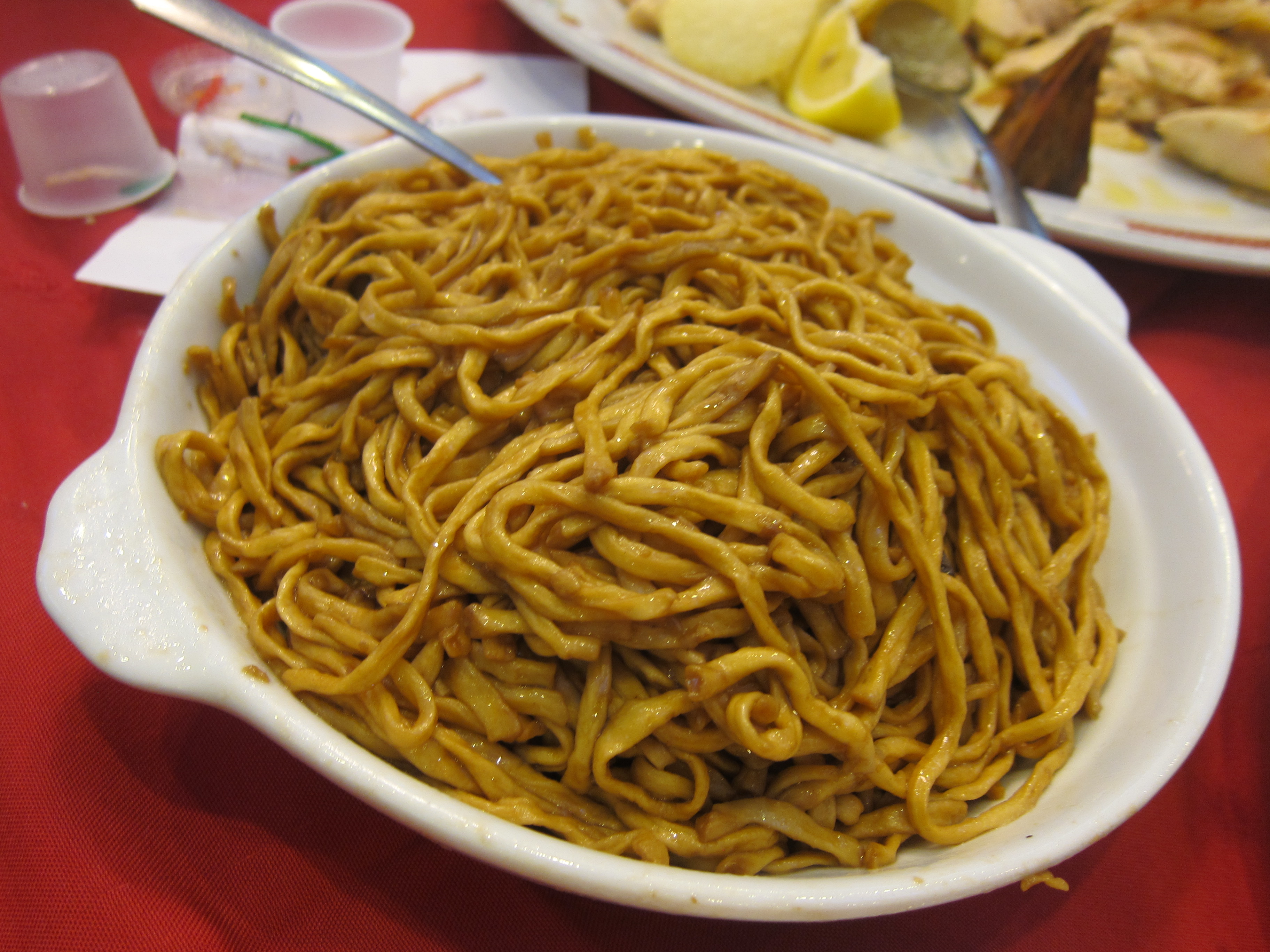 Was it the most perfect meal? No — but with a few knockout dishes, the company of Singaporeans and pineapple tarts to toast the new year, this sojourner certainly had no complaints.

Happy year of the snake! 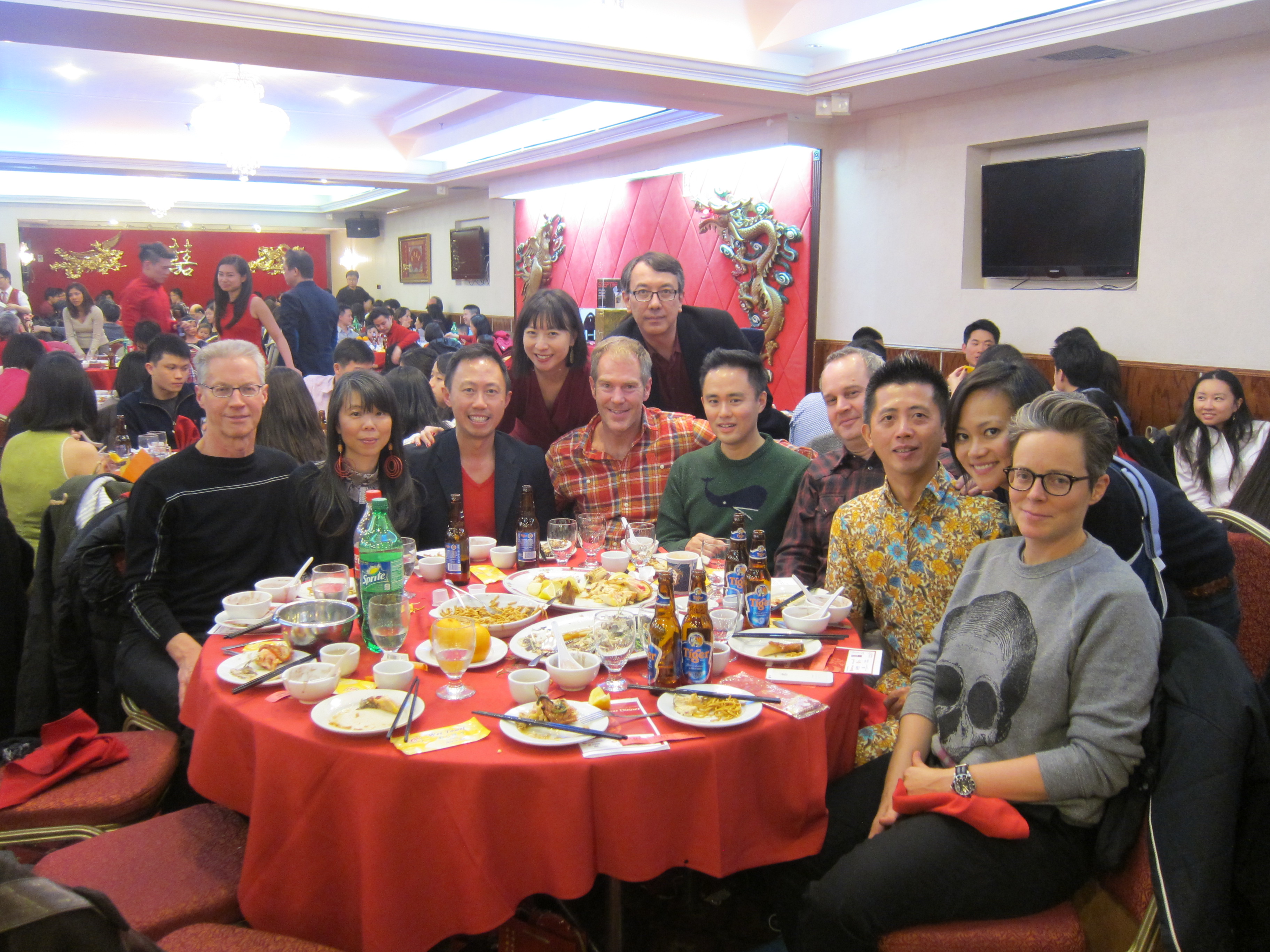