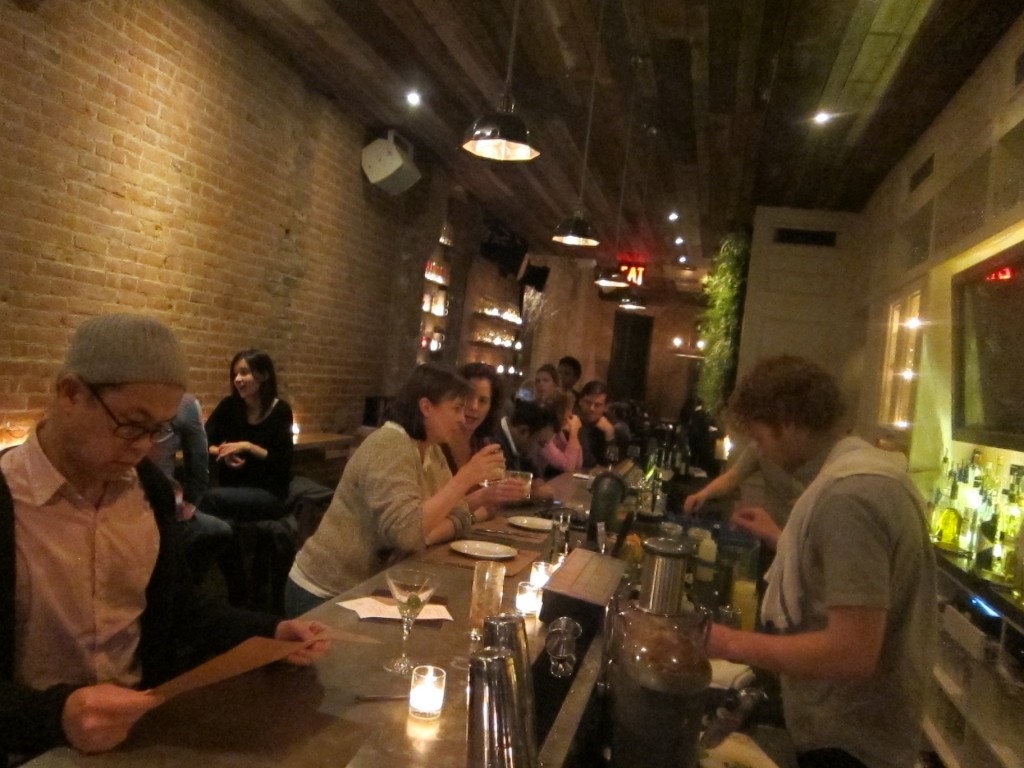 The decor of the place is striking — with its exposed brick detailing, walls of artfully displayed shrubbery, fancy, dim lighting fixtures and candles … 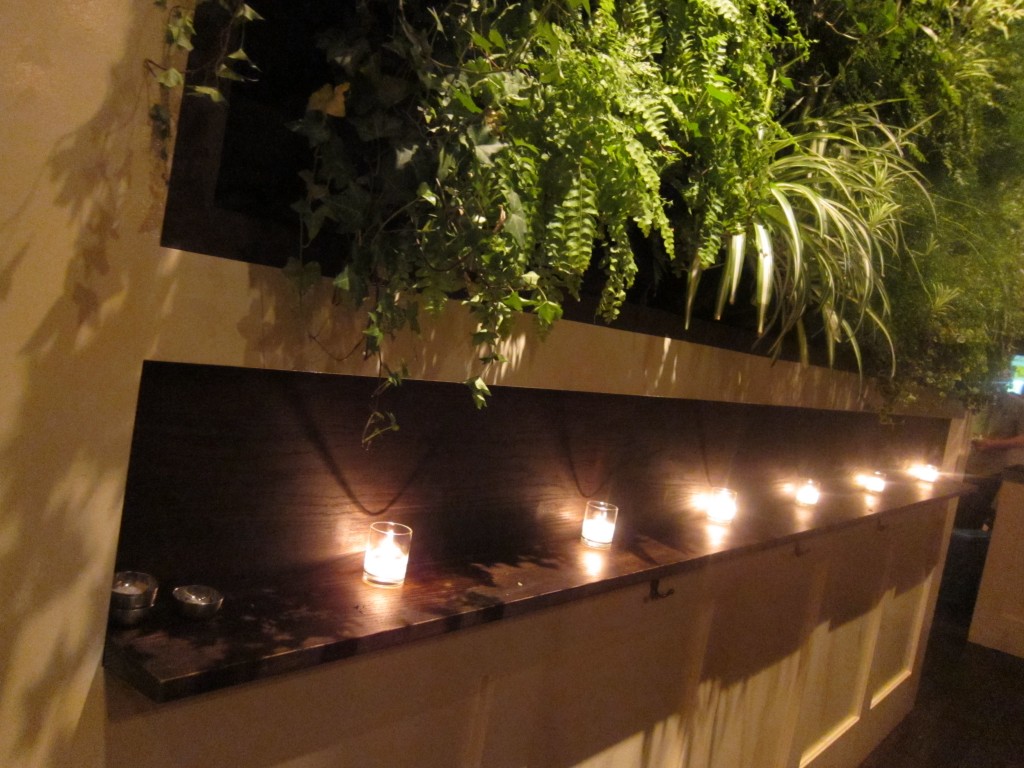 The team that put Colonie together knows how to pull off this aesthetic — Emelie Kihlstrom, Tamer Hamawi and Elise Rosenberg are all alums of Public, the fashionable restaurant in NoLita whose food is as good as its decor is trendy. (In the kitchen, chef Alex Sorenson himself hails from Mas, the upscale French “farmhouse” restaurant in the West Village.) 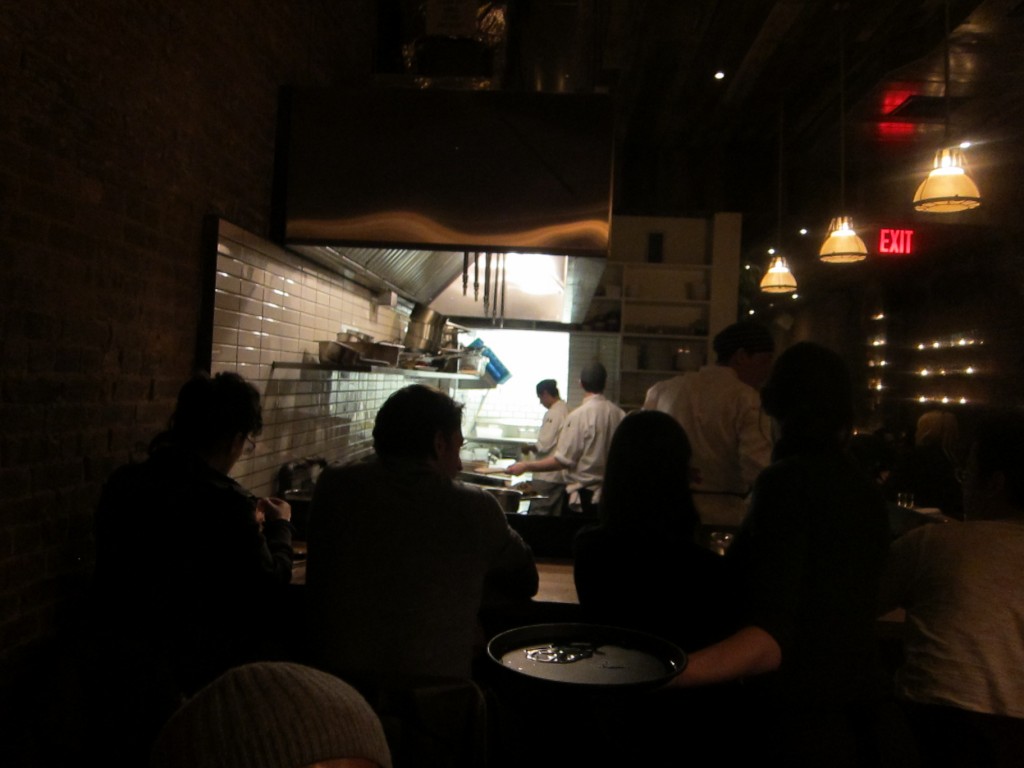 We began with the octopus salad with fennel, red watercress, apple and pickled onions ($12). The salad bit was fine enough but the octopus was oddly bland and, in fact, had a slightly mealy texture that was distracting. 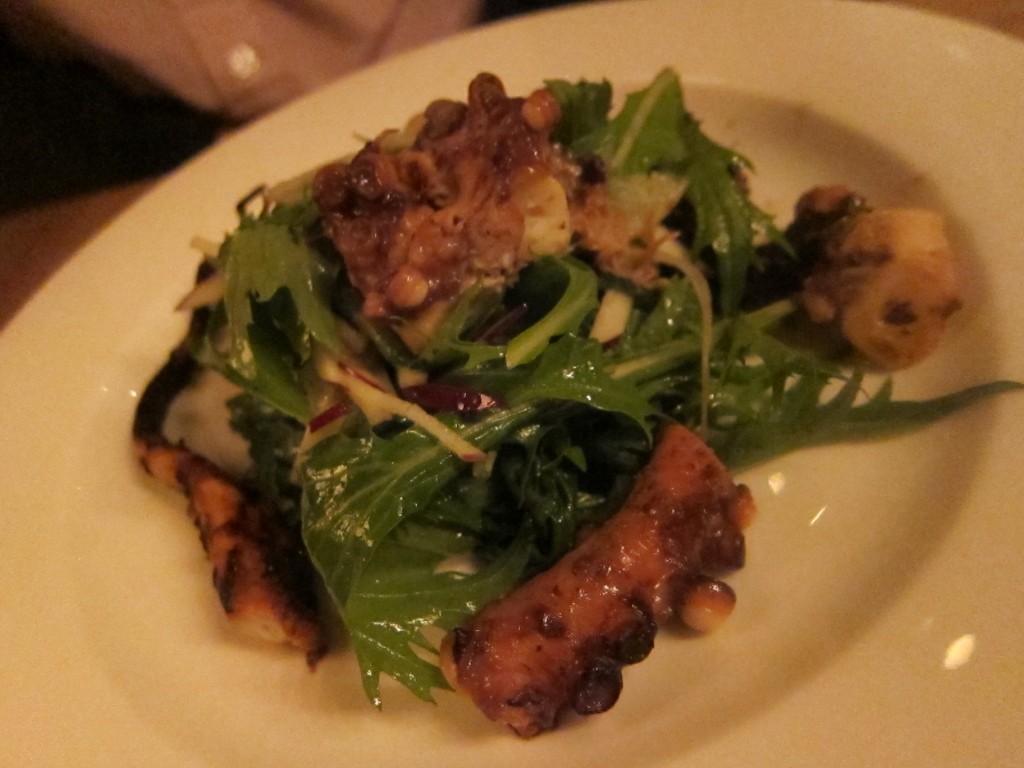 The black risotto topped with crispy enoki mushrooms ($9) had been recommended by our waitress so we were eager to taste it. The enoki mushrooms were lovely — but the risotto was, again, incredibly bland.

If you’re going to eat carbs, the taste must make it worth it. 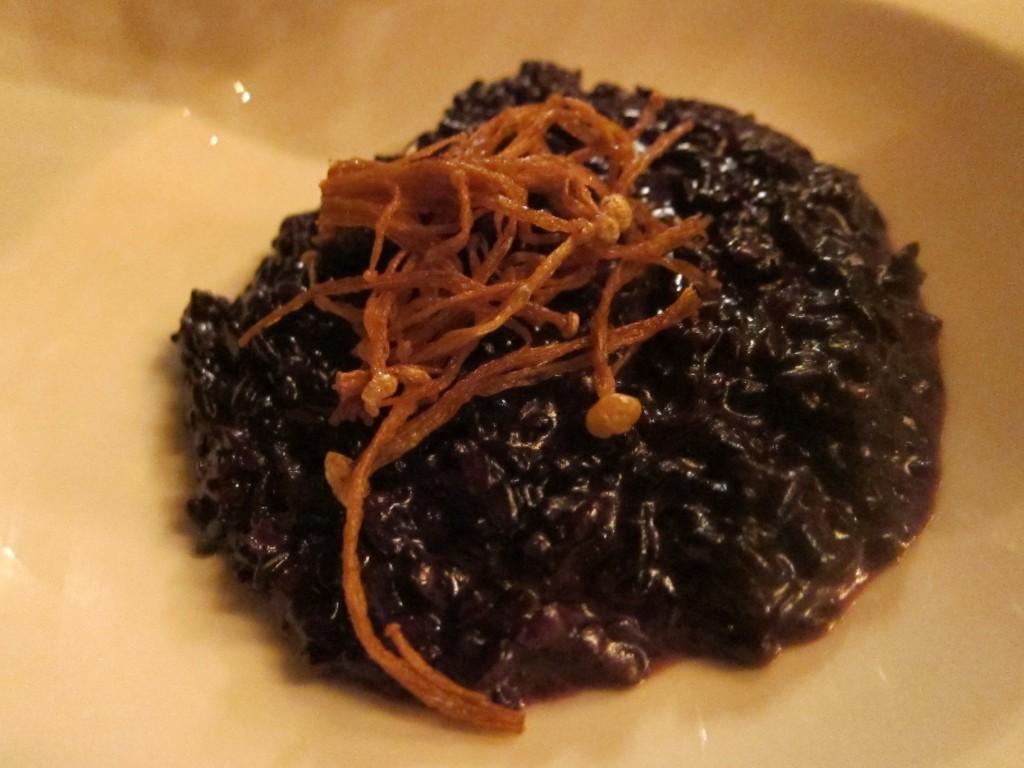 Every New York restaurant these days must have an egg appetizer on the menu, it seems. (Thank you David Chang for starting that movement with your homerun of a hen’s egg with caviar and potato chips dish.) Colonie’s — served with wild mushrooms, beans and spelt for $10 — isn’t bad. It’s just not memorable — it is, at the end, merely a fried egg with mushrooms, beans and spelt.

Move along folks, nothing exciting here. 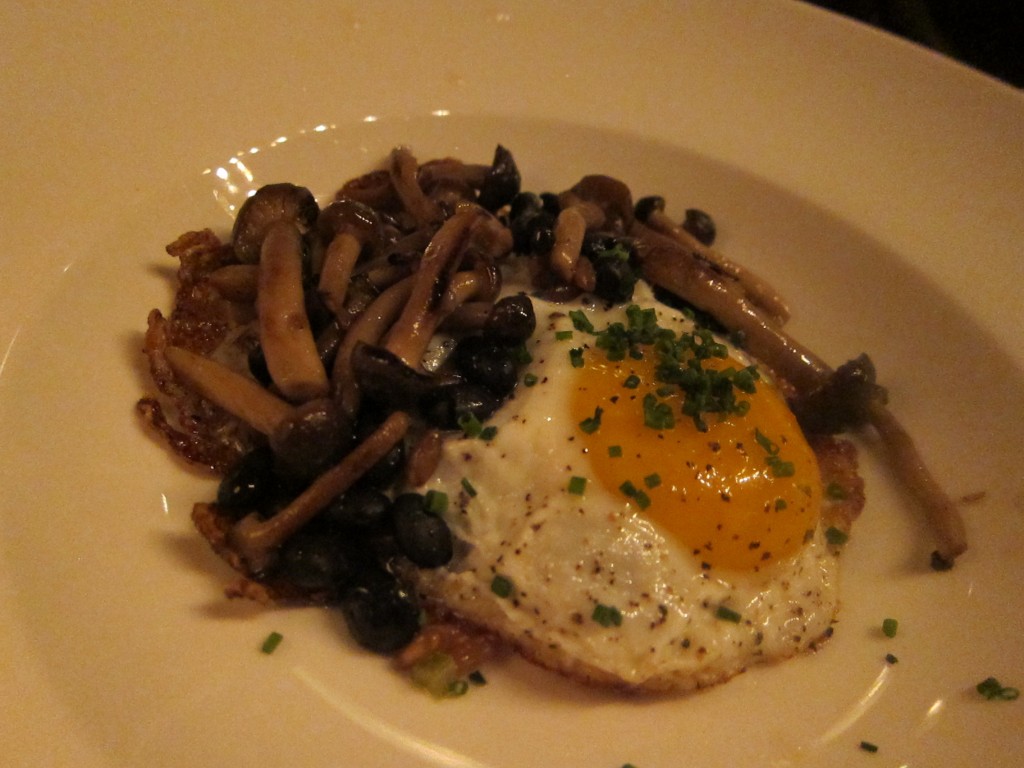 The $10 beet salad, however, was a bright spot in the appetizer lineup. Paired with oranges, crystallized hazelnuts, shards of ricotta and plump mint leaves, each bite offered a lovely combination of flavors, topped with the delightful mouthfeel of crunchy beets. 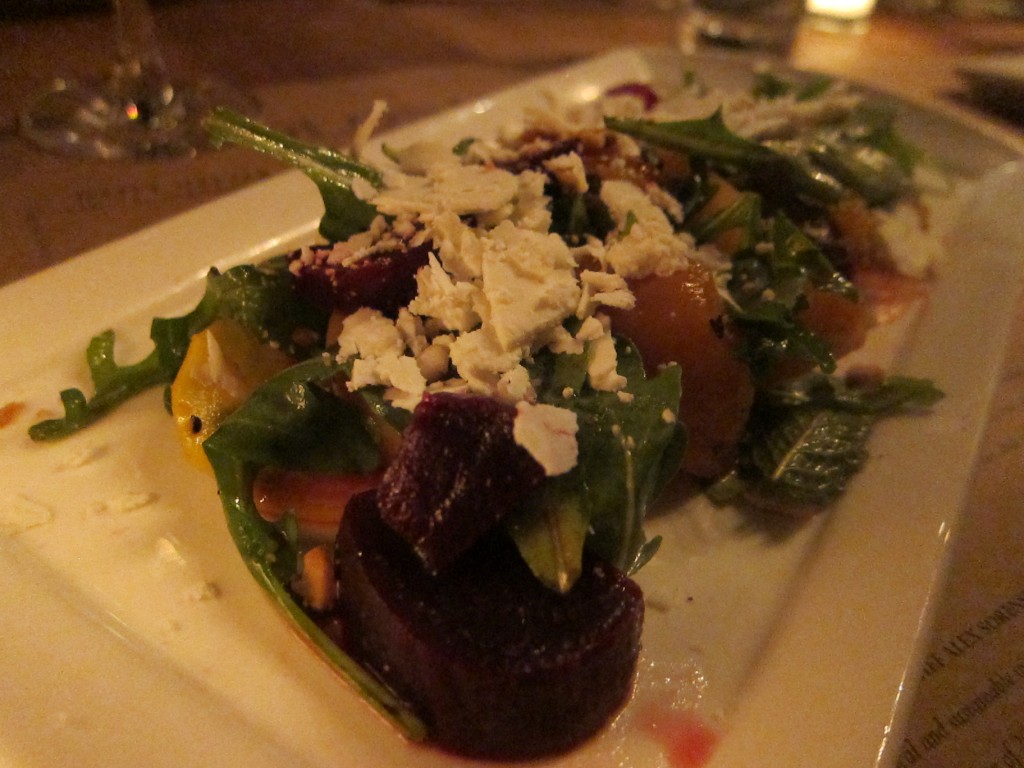 Sadly, however, the pedestrianness continued into the entrees. Scallops paired with squash and red cabbage ($18) were bland and forgettable. 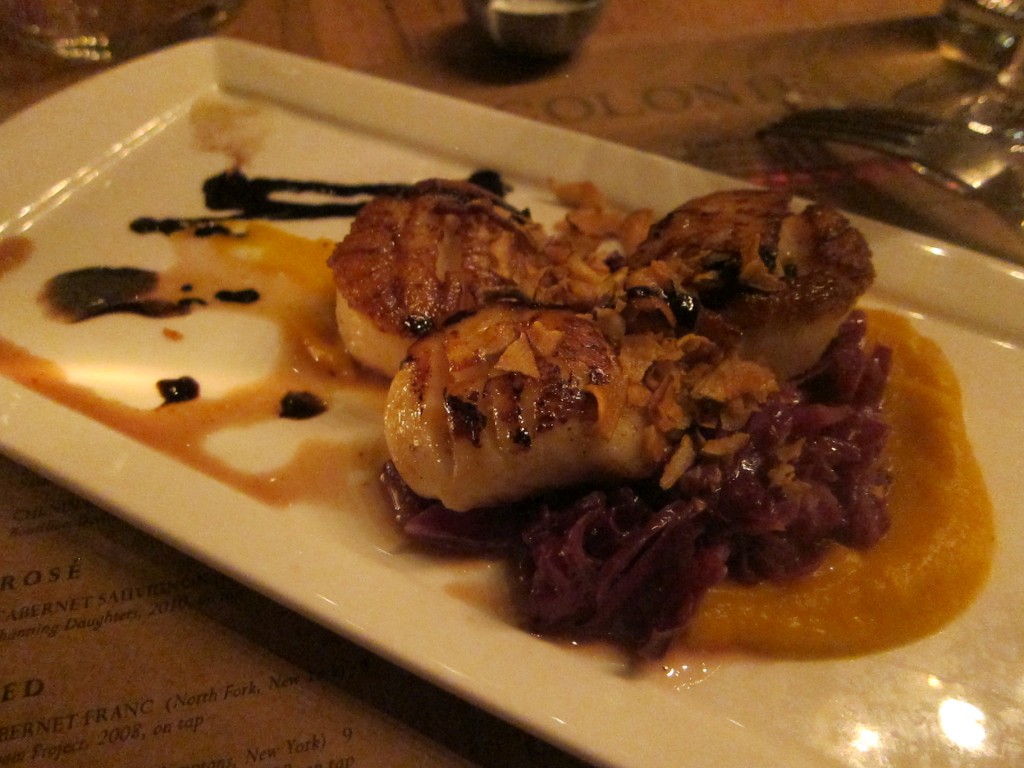 The mussels special was perfectly fine — comforting, though not anything special. 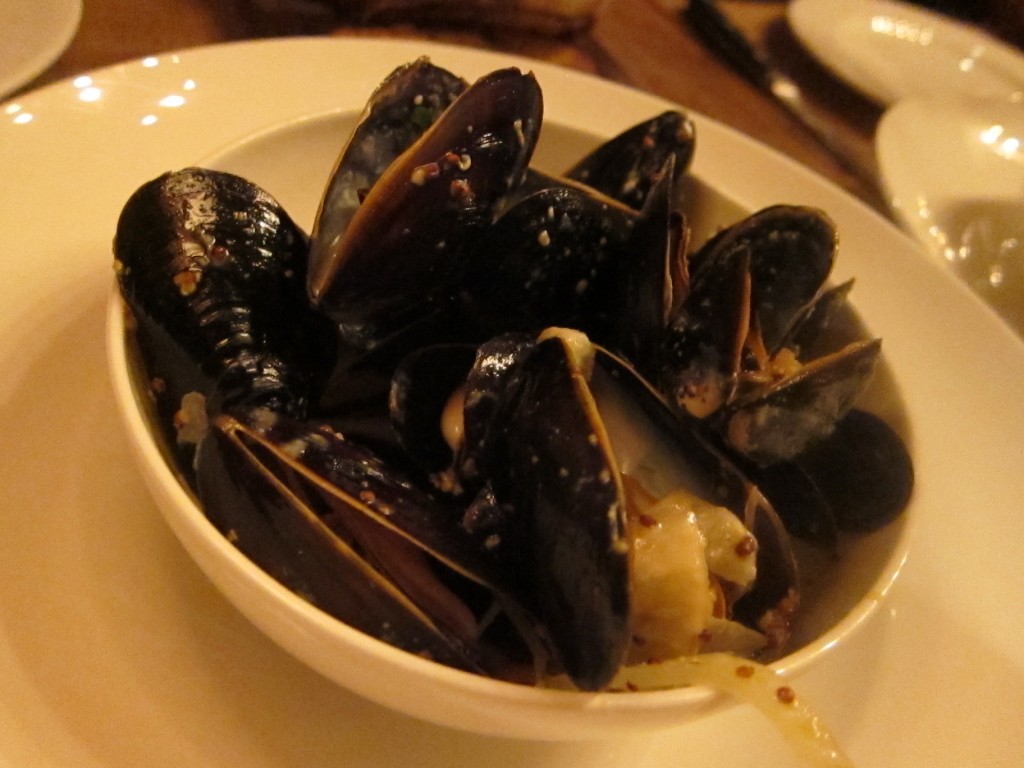 The rabbit lasagna with swiss chard and sundried tomatoes ($19) sounded promising and it was the tastiest of all the dishes — even if it was served a little too lukewarm for our liking. 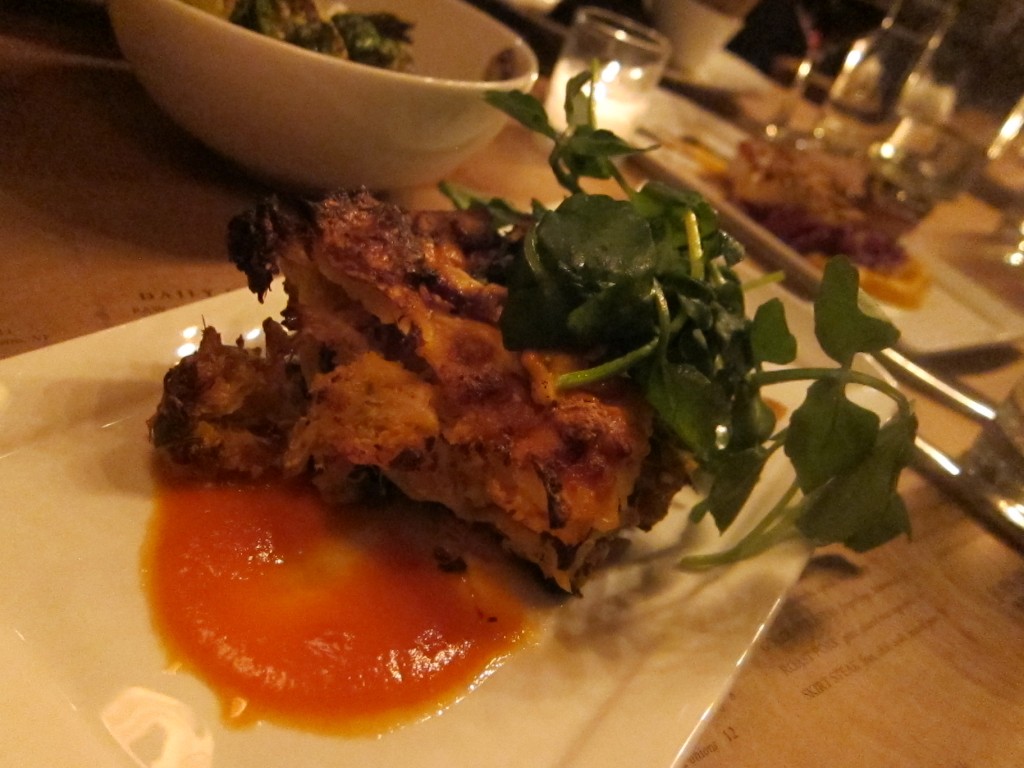 In the end, however, we found the most well-executed dish on the table to be the side of fried brussels sprouts tossed with bacon and cranberries ($8). The brussels sprouts had a lovely charred crust to them and the juxtaposition of sweet cranberries with smoky bacon was lovely. 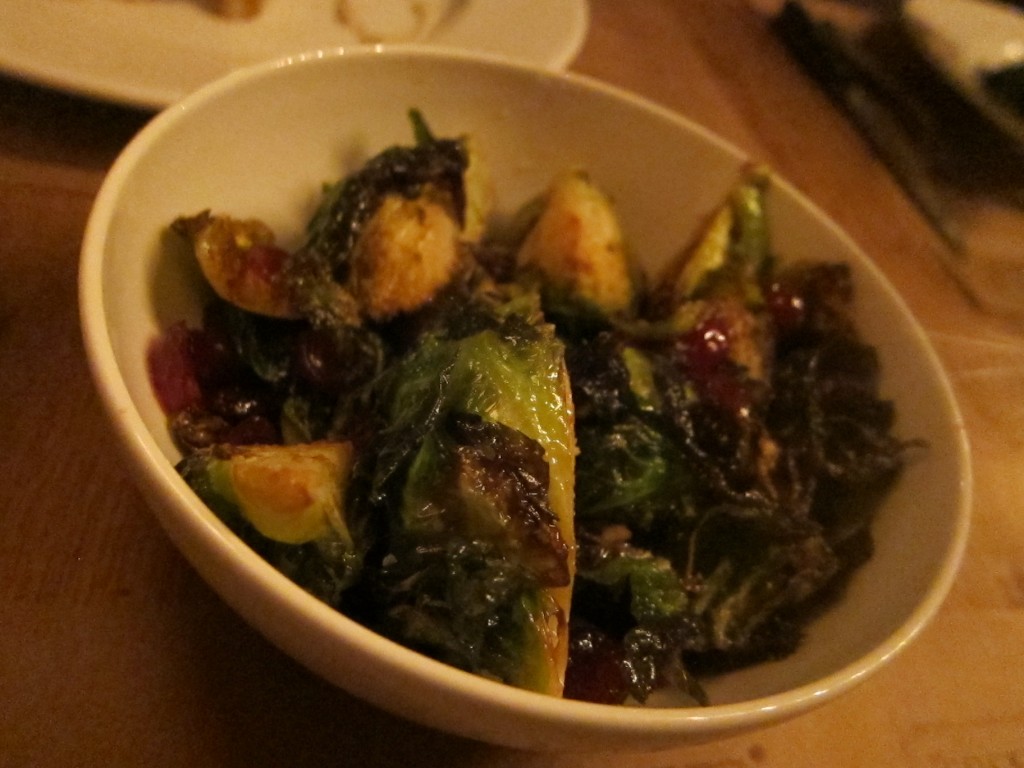 Having had this rather large meal, we initially demurred when dessert was mentioned.

And then we heard about the foie gras donuts and, naturally, all bets were off. These little donuts came slightly warm, topped with a thick cherry glaze.

The idea was fascinating but when it came down to it, dough injected with foie gras, even with the sweet topping, felt like a little too meaty of an ending for a meal. 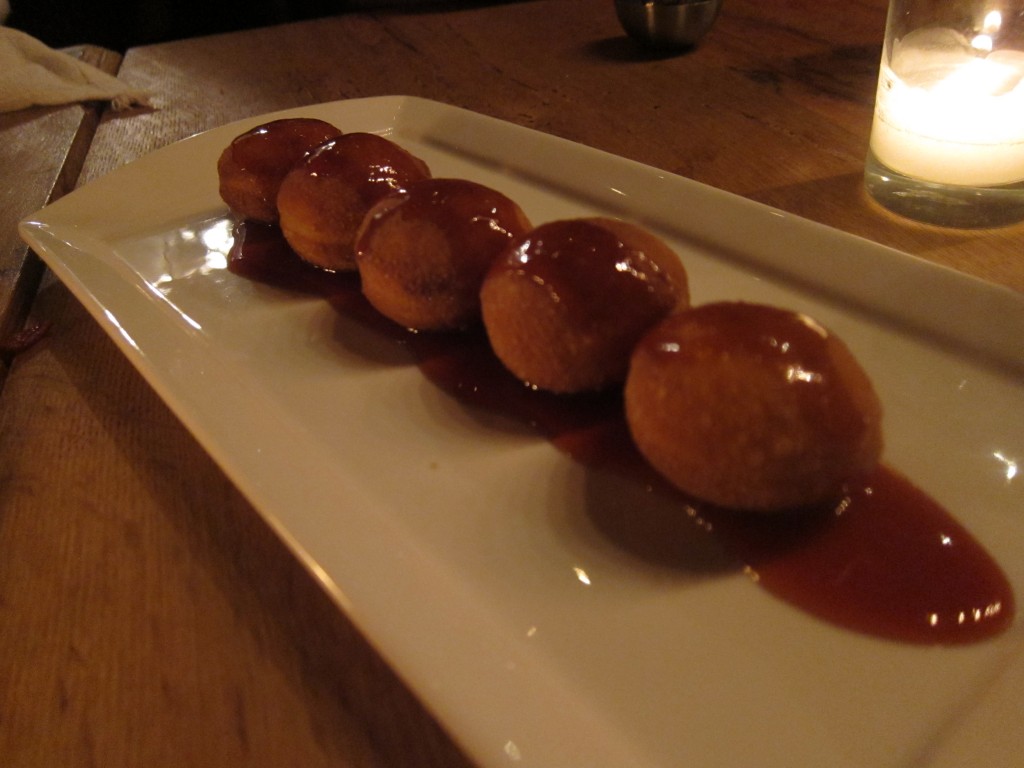 This donut realization says something of Colonie as a whole as well — the idea for the place and the look of it may excite but when it comes to the meat of the place, its food, there’s just something a little lacking. Over time, perhaps, this can be fixed. But until then, this restaurant is a place with a whole lot of style and not much substance.