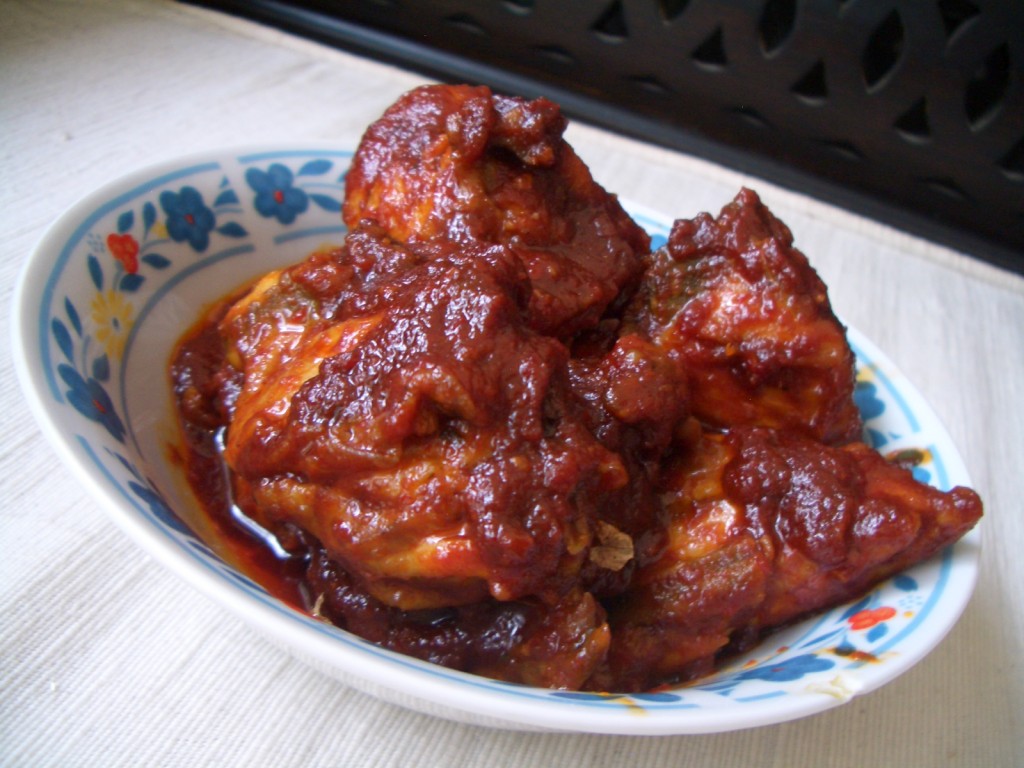 Now, this isn’t a dish that my family makes — if we have a homemade curry on our holiday table, it’s usually Aunty Alice’s Chinese-style chicken curry. But even so, ayam masak merah certainly is one that we adore. (If it appears at a family meal, it’s usually because it’s been purchased.)

My dear friend Aisah’s mother makes it though — usually for special occasions like the Malay new year — so when she offered to teach us how to make it a few years ago, I was eager to learn.

I’d never thought of trying to make it before — with its myriad flavors packed in, I just always assumed it was pretty complicated. But it’s actually somewhat straightforward — you fry up the chicken until it’s nice and crisp, set that aside, then fry up the spices until they’re fragrant, add gula melaka (palm syrup), tomato sauce and more, mix that up and then add the chicken back in.

As I watched Aunty Jianab do it, I was amazed that such magic looked so effortless — and I was grateful that she had taken the time to share her recipe.

So in that spirit of sharing, here’s her terrific recipe below. And here’s wishing you all a sweet (and spicy) holiday season!

Lightly salt the chicken pieces and set them aside for half an hour before cooking. Soak the dried chillis in hot water for five minutes until they’re soft. Drain them and then set them aside.

Using a blender, puree the shallots, chillies, garlic and enough water so that you form a wet paste. This is known in Malay as the rempah, or seasoning paste that will form the flavor backbone of the dish. Set this rempah aside.

Pour enough oil into a wok so that the oil comes up two or three inches high–heat the oil. When it’s crackling hot, fry the chicken pieces until they start to turn golden but are not fully cooked. Remove the chicken and set it aside.

Pour out the hot oil in the wok, reserving about 1/4 cup of oil. Heat that 1/4 cup of oil–when it’s hot again, add the rempah to the wok and fry it over high heat until it’s fragrant and you can really smell the spices. Add 1/4 cup of water and the 1/2 chicken bouillon cube and mix it up, making sure that the cube dissolves. Add tomato puree, then gradually stir in the kecap manis. Look at the color carefully–you want it to be a dark crimson. If it starts getting too dark, dial back on your kecap manis, which sweetens it.

Stir in the gula melaka then add 1 tsp of salt and the chicken pieces. Fry it altogether until the chicken is completely cooked through, which should just be a few minutes.

Serve hot with steamed rice. Note: This dish is often better a day or two after you make it so the flavors have more time to mingle together and deepen.

** Gula melaka is sold in solid chunks. To liquify these chunks, heat them over low heat in a sauce pan, adding water as it melts until you reach a maple syrup-like consistency. Then run the liquid through a sieve so flies and other impurities are removed.