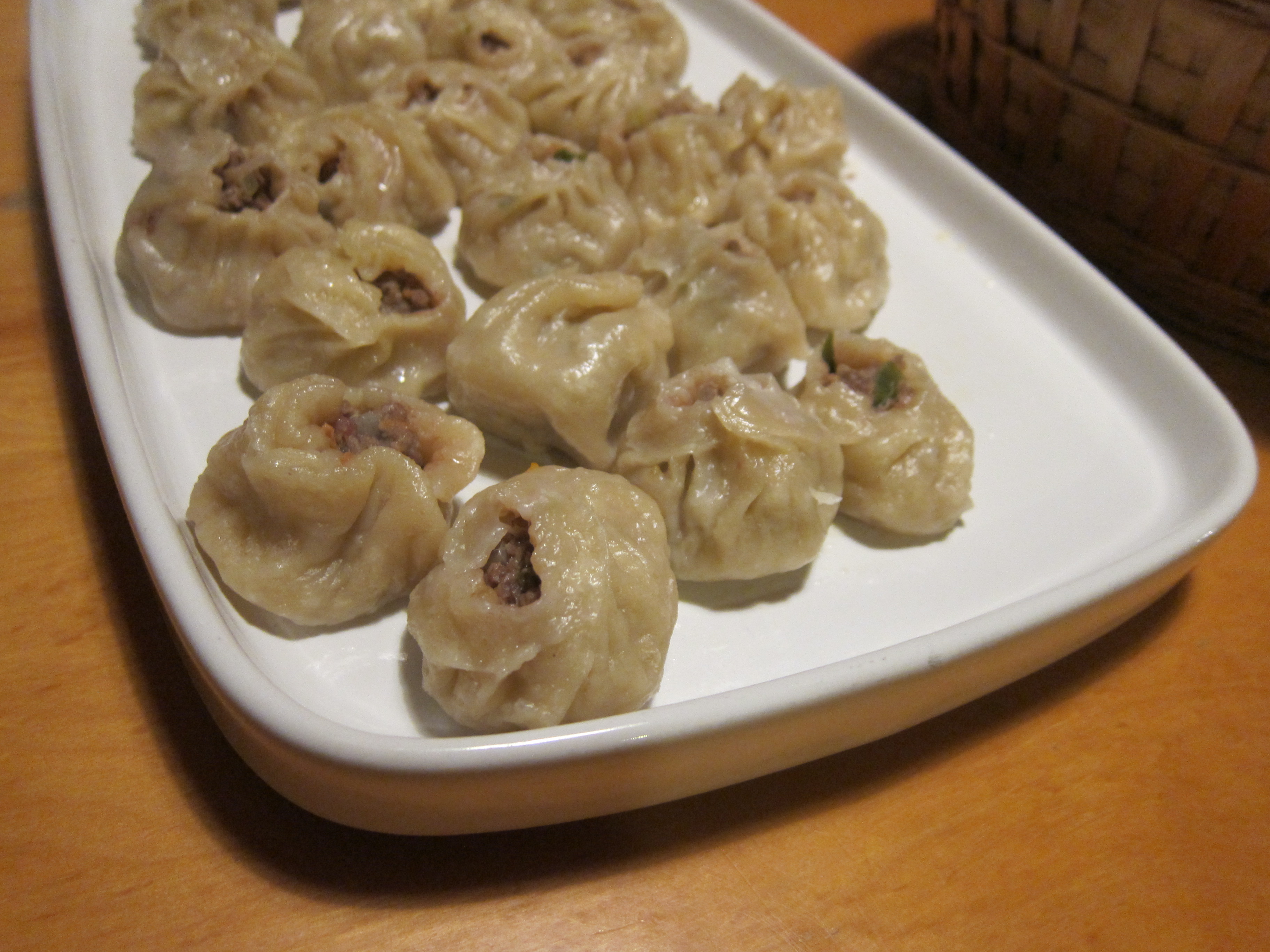 Eating in front of the telly is something that happens with some regularity in these parts.

When your partner is a super busy television critic, that tends to happen. And I’m certainly not averse to sitting down to lunch, dinner or brunch in front of the box. (A side of Downton Abbey with any meal? No problem at all.)

So when the Let’s Lunch crew decided on sharing perfect snacks for TV watching in our February posts, I knew I had to jump back in the fray.

What do we eat while watching something? Everything, really: Stews, noodles, omelettes, sandwiches. But I’ve learned that the ideal item is something compact — bite-sized and easy to pop in your mouth for a quick chew.

Which is what makes dumplings pretty much the perfect TV food …

Now, I’m no stranger to dumplings. I grew up in Singapore, land of wonton (or wanton, as we spell it) noodles for breakfast, after all. And I my Korean mother-in-law’s mandoo recipe remains one of my favorites in A Tiger in the Kitchen.

Recently, however, while spending a month on a mountain in Northern California holed up on a ranch and writing my second book, I had the great fortune of meeting a Mongolian artist who happened to know something about cooking. We were part of a small group of artists at the Djerassi Resident Artists Program — where we were given artists studios for a month and fed incredibly well.

On Saturdays though, we were left on our own — an Indian artist showed us how to make chana masala one weekend; I whipped up a batch of Singaporean chicken satay another. Just when we thought the boys in the group didn’t have anything to teach in the kitchen, Tuguldur Yodonjamts asked if we liked Mongolian buuz.

It turns out that dumpling making crosses gender lines in Ulaanbaatar, where Togo’s from. “It’s like a competition,” he said, explaining that men and women would jab each other in the kitchen over which side could make more dumplings. (Ask him which side is better, however, and he just laughs.)

The process is simple — mix up ground beef with chopped scallions and onions. Then mix together a little vegetable oil with water, salt and pepper and pour that over the beef. You don’t want to add too much liquid — enough to make it firm but just a little mushy. 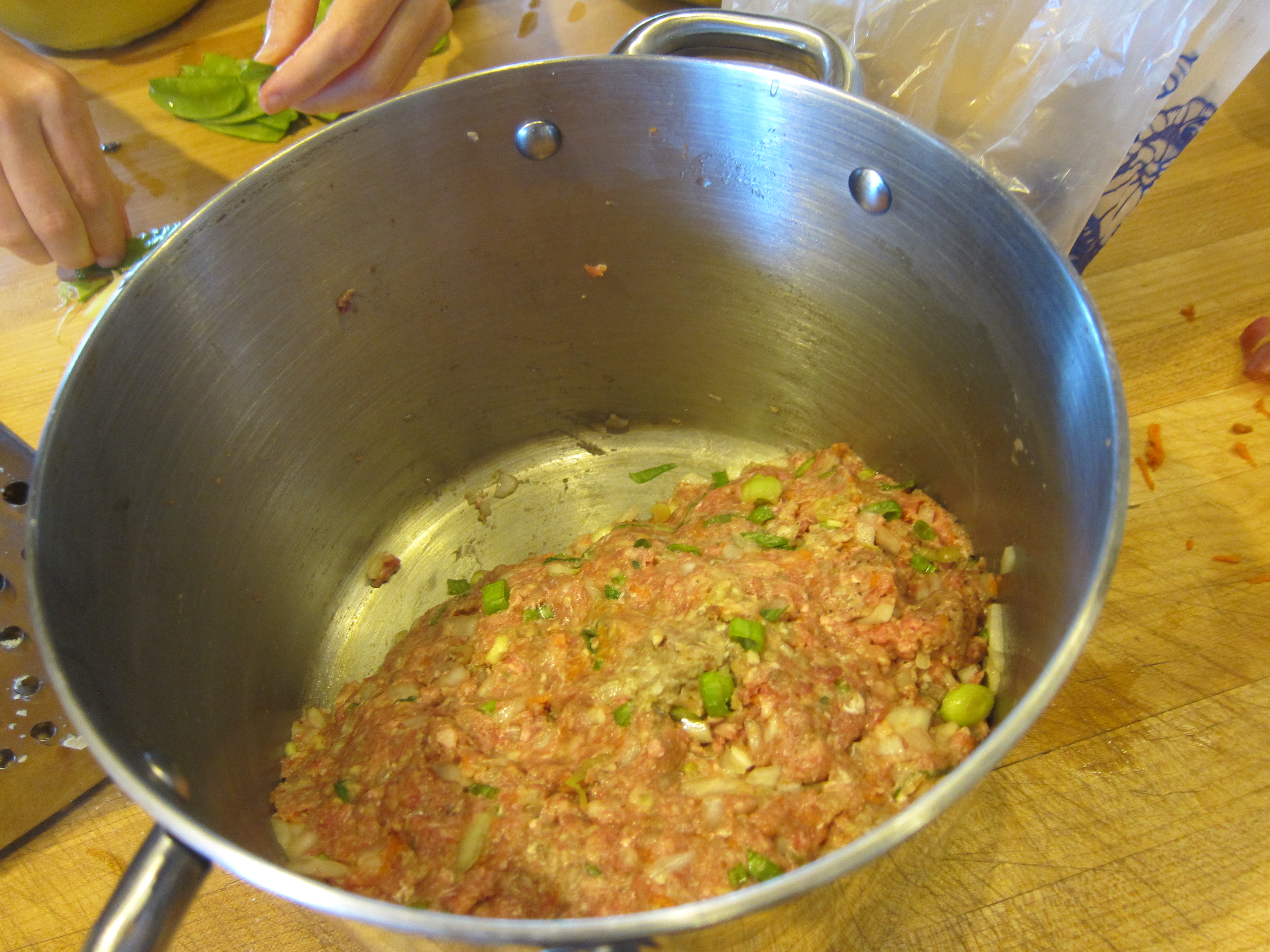 Next, mix all-purpose flour and water together in a large bowl, kneading until you form a dough. If you’ve ever made dumplings and felt dumpling skins before, you’ll know how the dough should feel — just slightly tacky but not sticky. 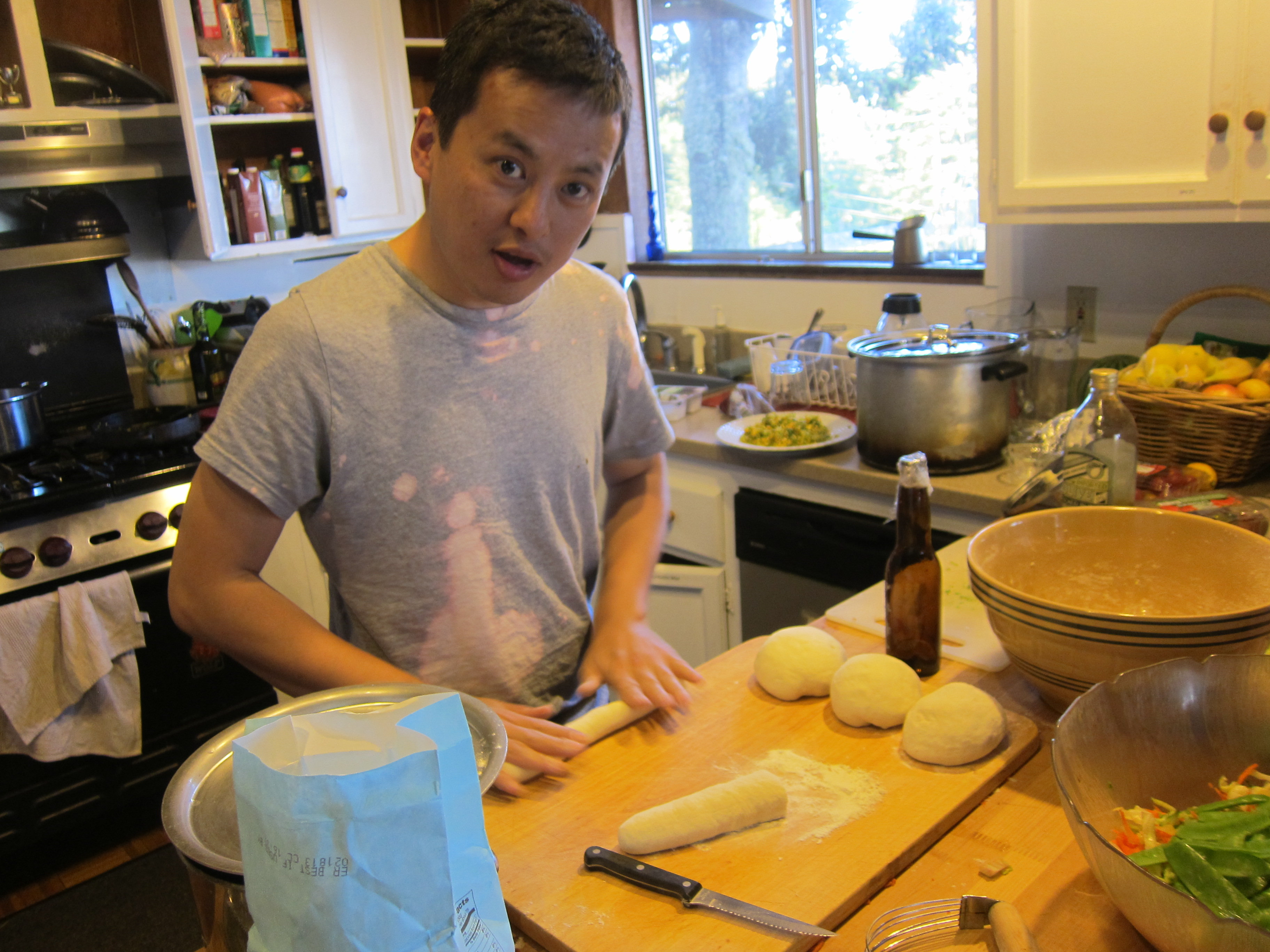 … then cut up those tubes into small pieces. 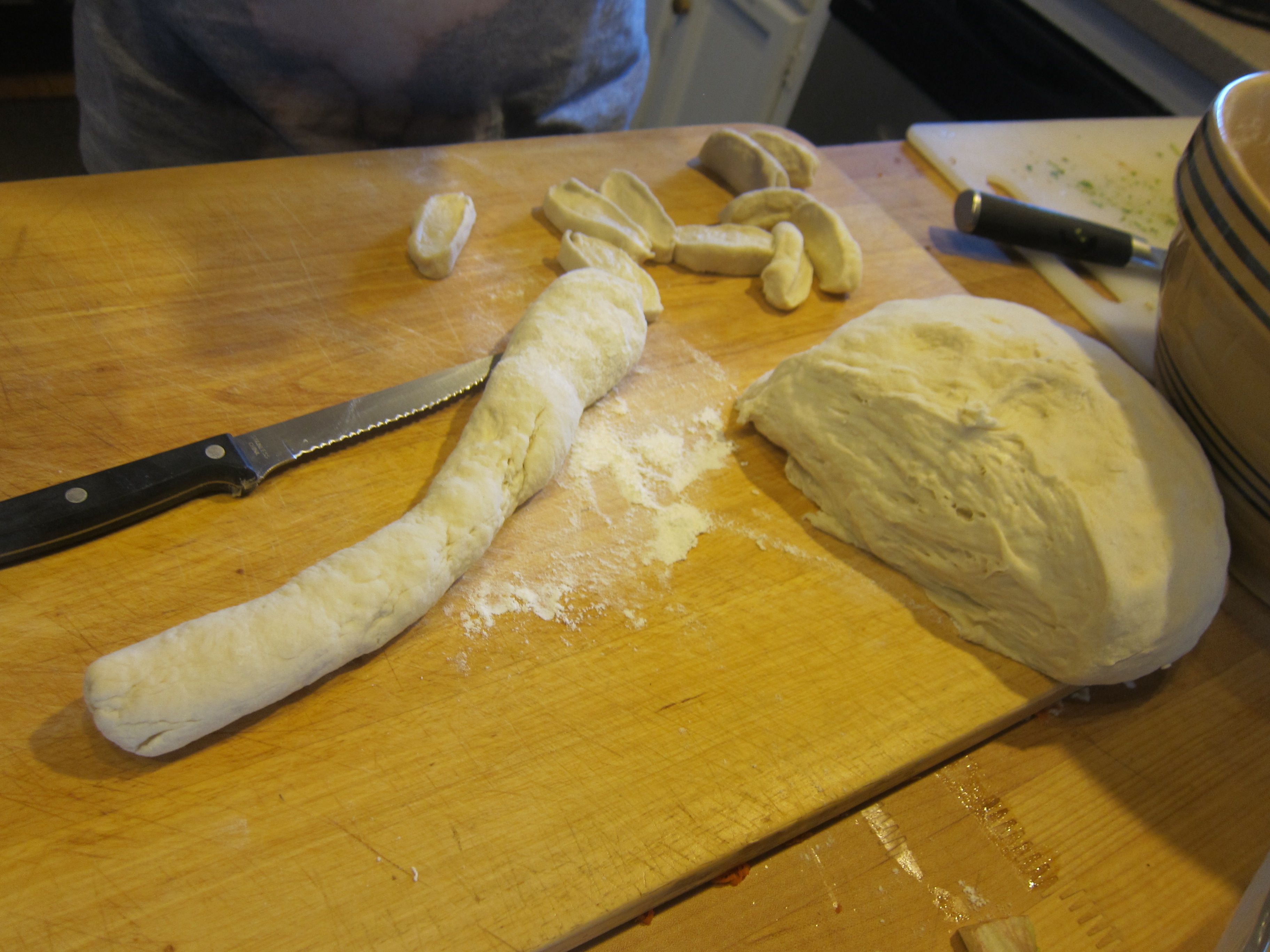 Next, toss those pieces (which are about slightly more than a tablespoon of dough) in flour. 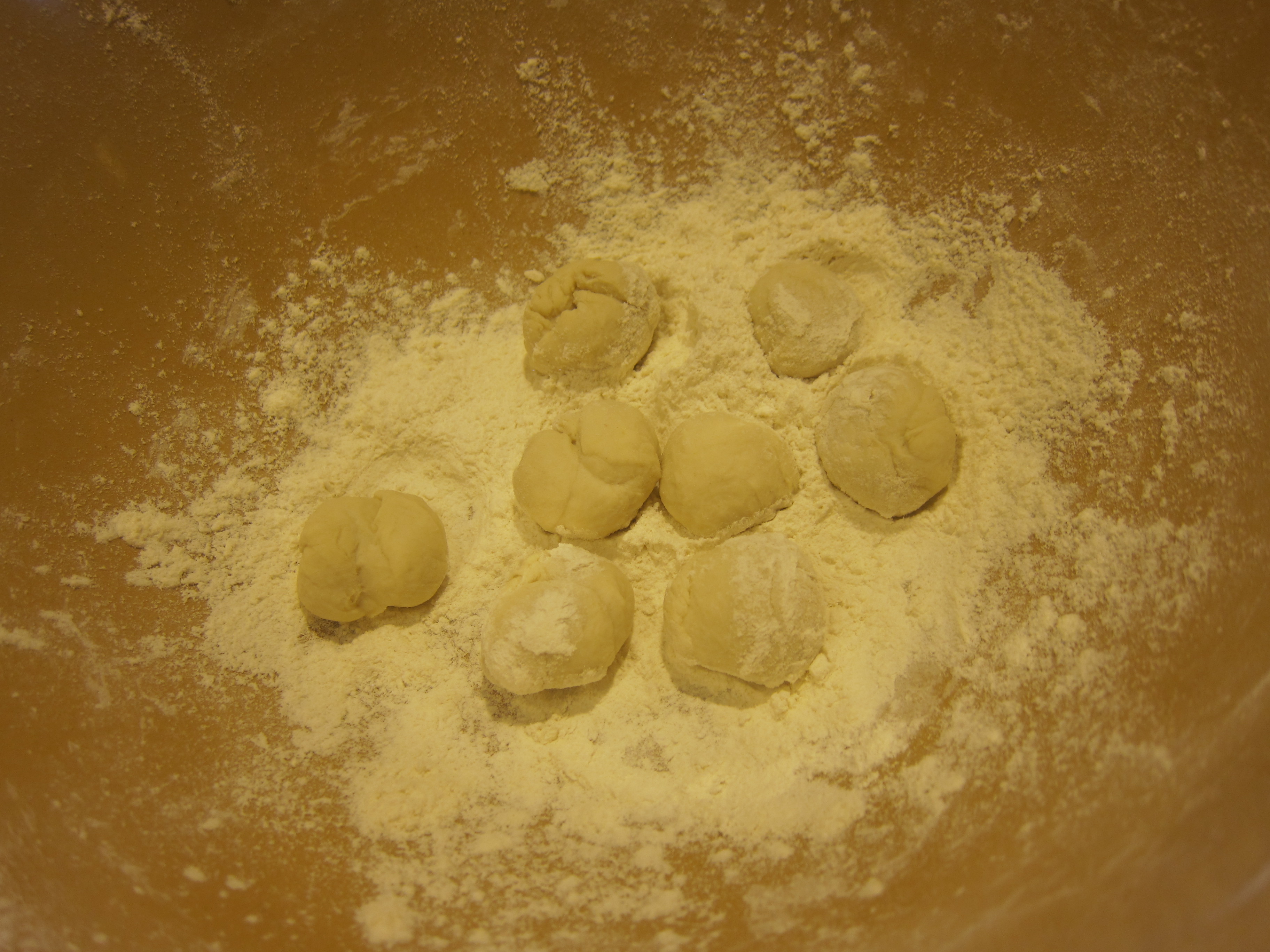 Then, peel the label off a beer bottle and start rolling away.

You could use a rolling pin to do this but the circles you’ll get will be a little too evenly flat. What you want, Togo says, is a dough round that’s a little thicker in the middle, which is where the buuz filling goes. (If you use a beer bottle for rolling, you can control the movement a little better, rolling the circles from the outside in to ensure that the center is thicker.) 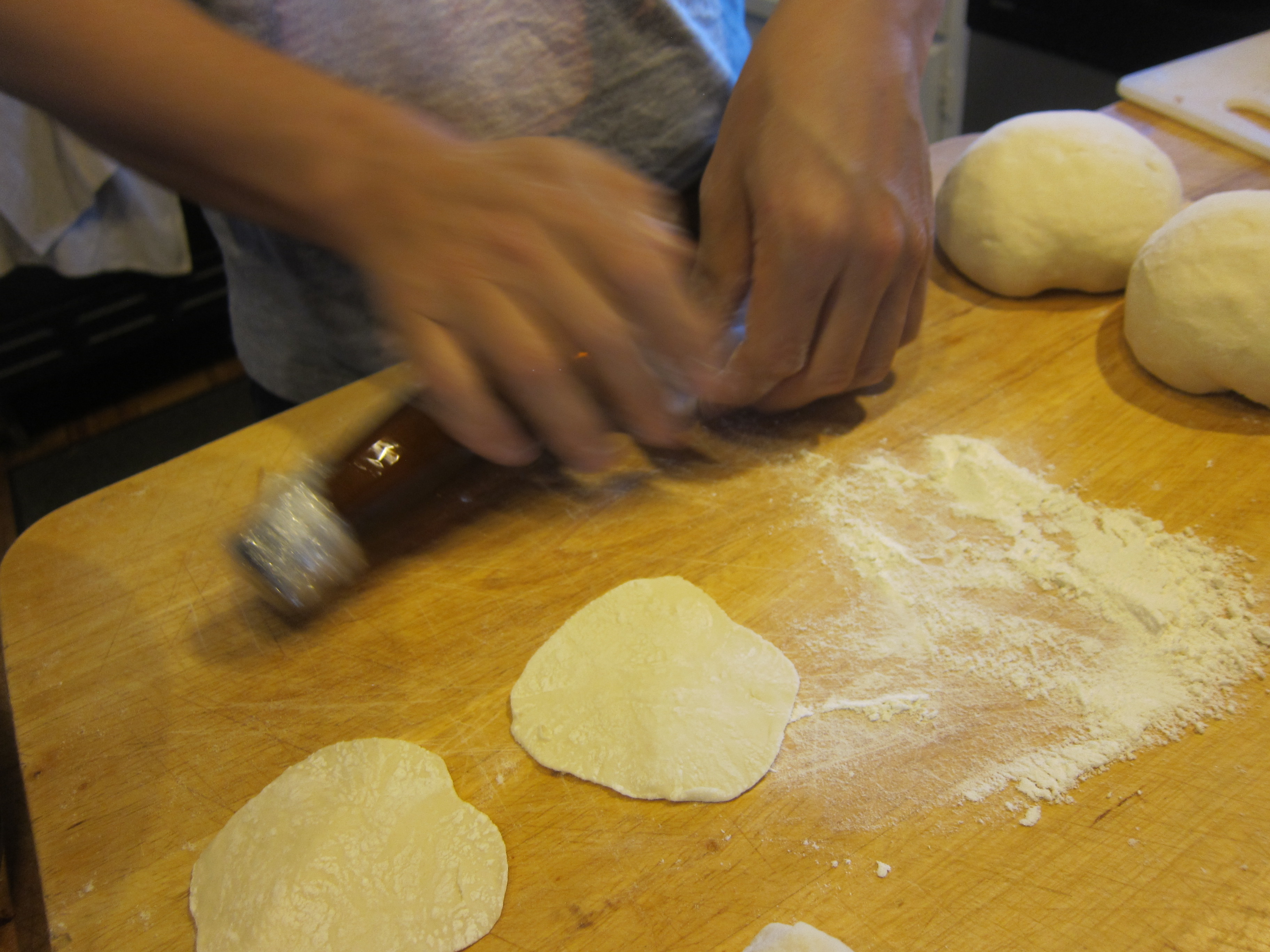 Once that’s done, put a little beef filling in the center, … 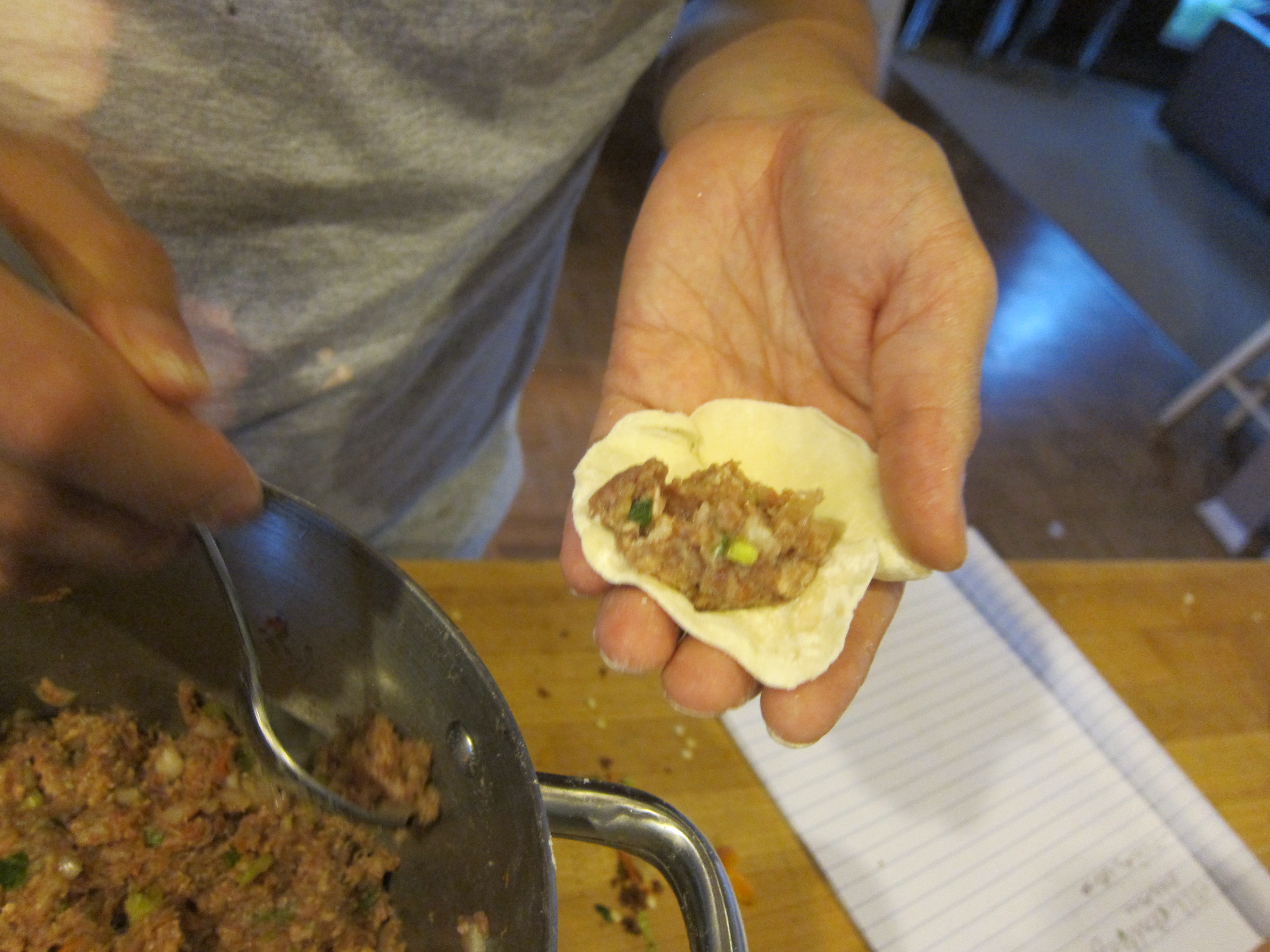 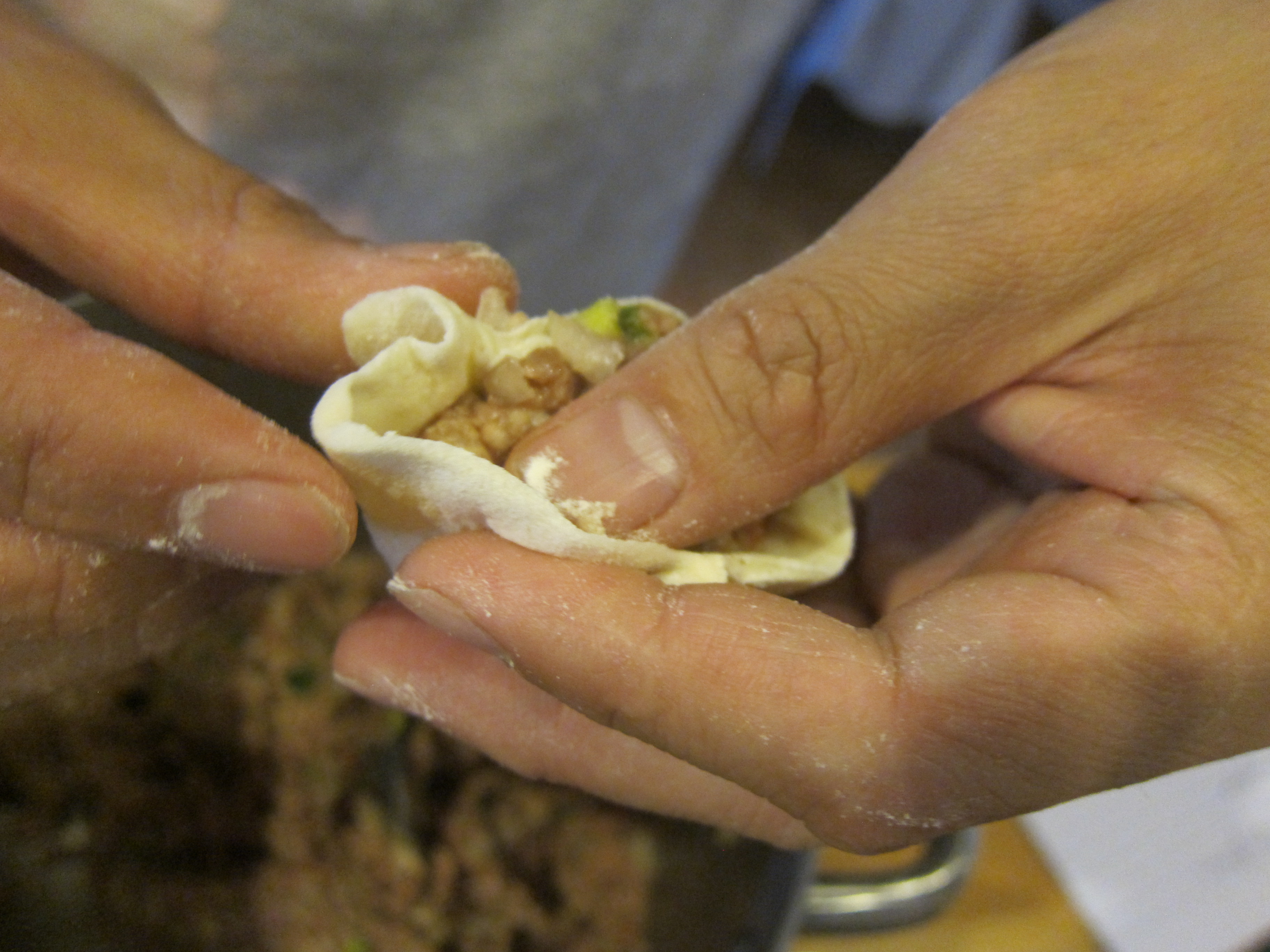 … and then start folding the dough inward in a circular motion. 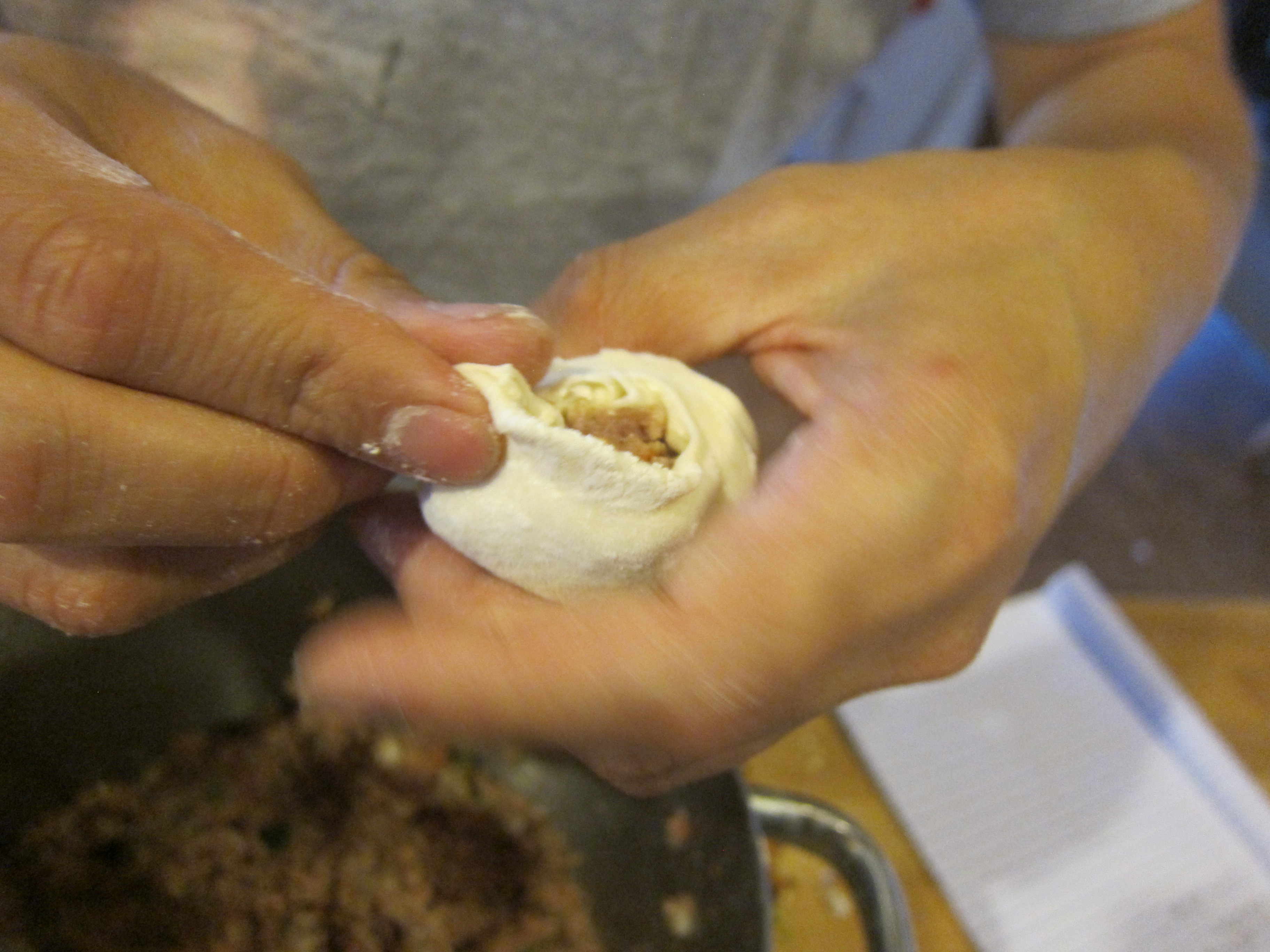 At the end, you’ll have a little dough ball with an air pocket at the top — just so. 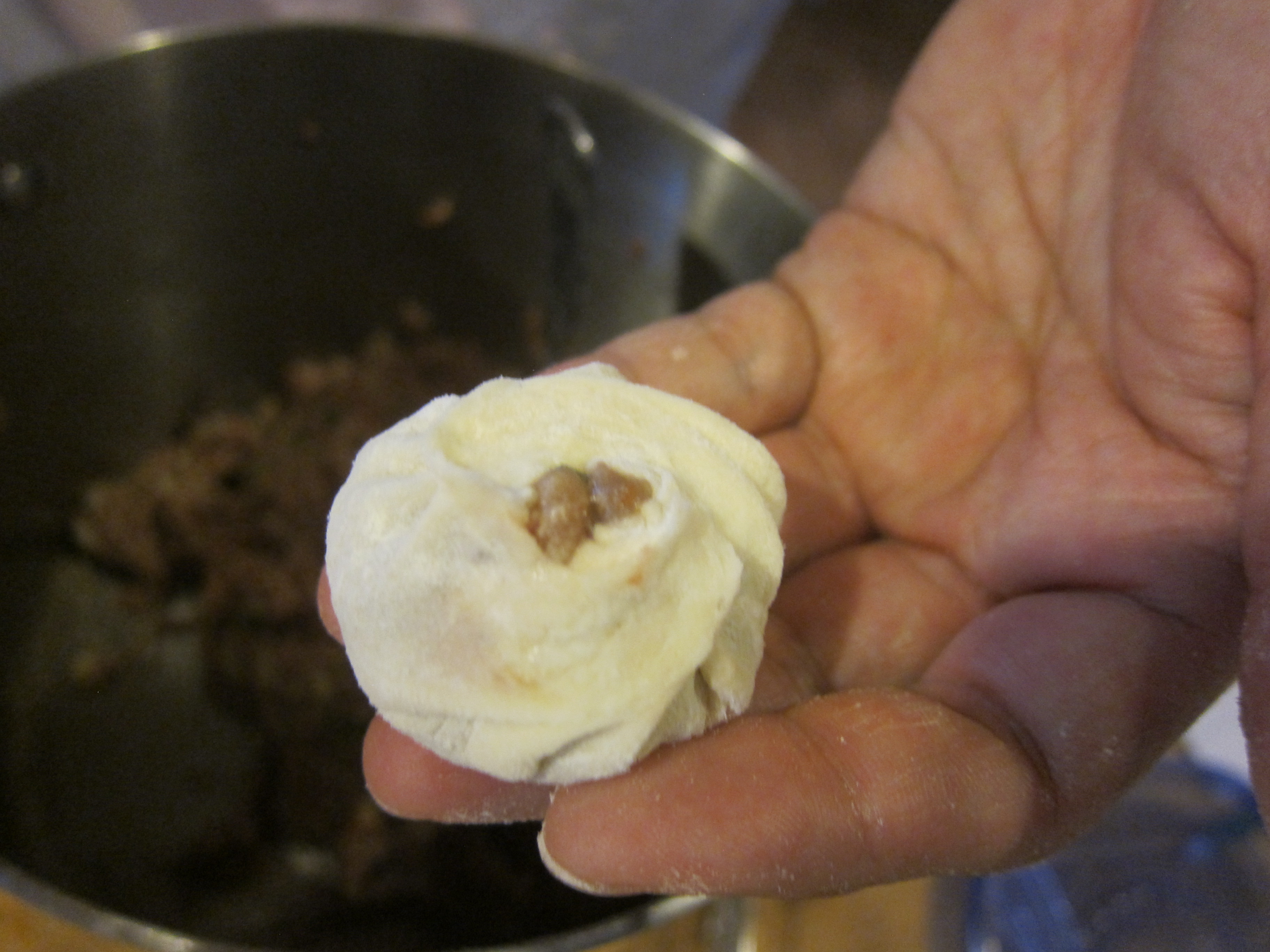 Our little group spent a lovely evening making dumplings together — I think you can tell which ones Togo made and which have the stamp of the rest of us amateurs. 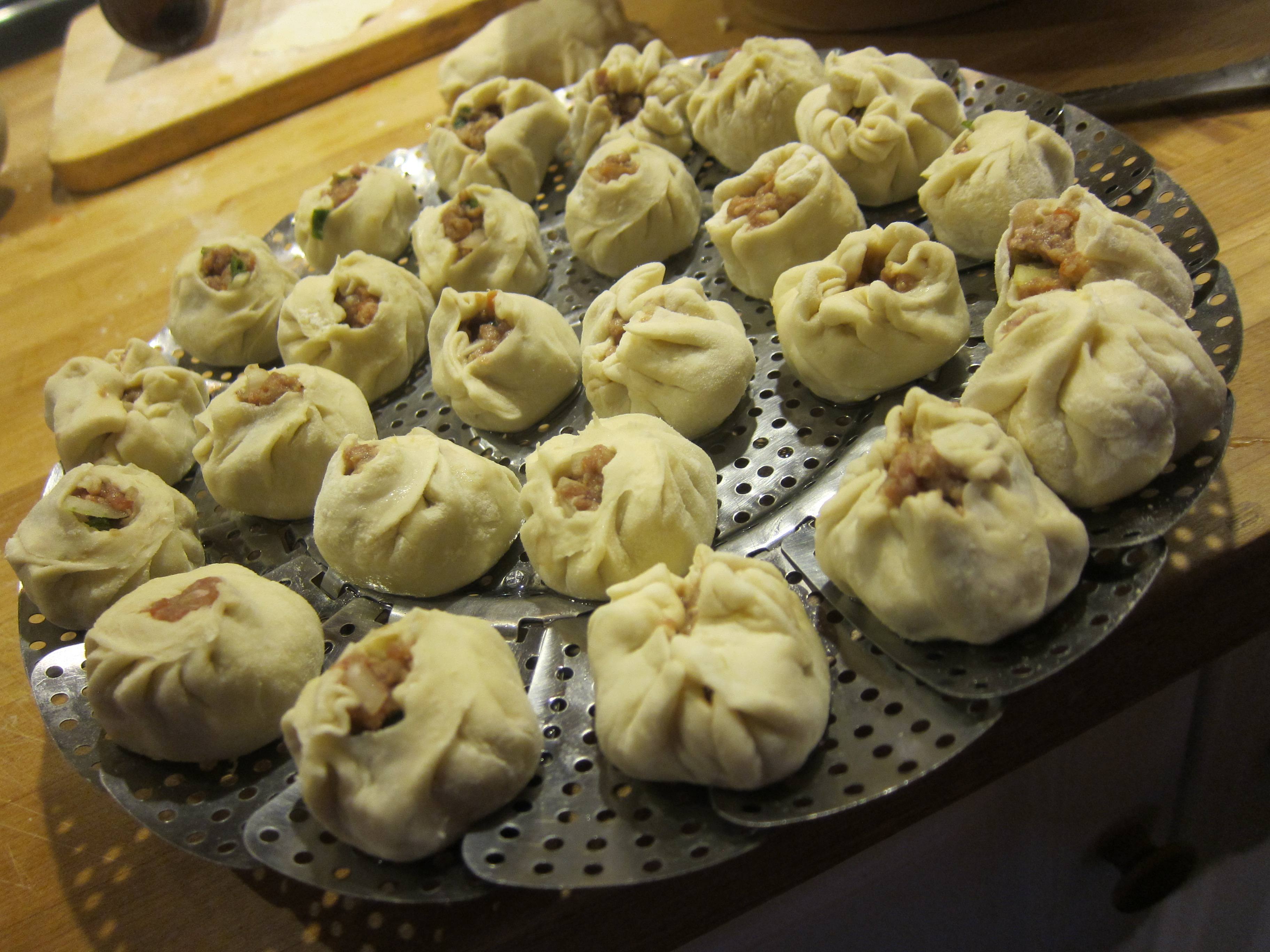 When that was done, we popped them in the steamer for 10 minutes and we were ready to eat. (See above.)

And even if anything non-meat is very un-Mongolian, we even made some vegetarian versions stuffed with tofu and sweet potato. 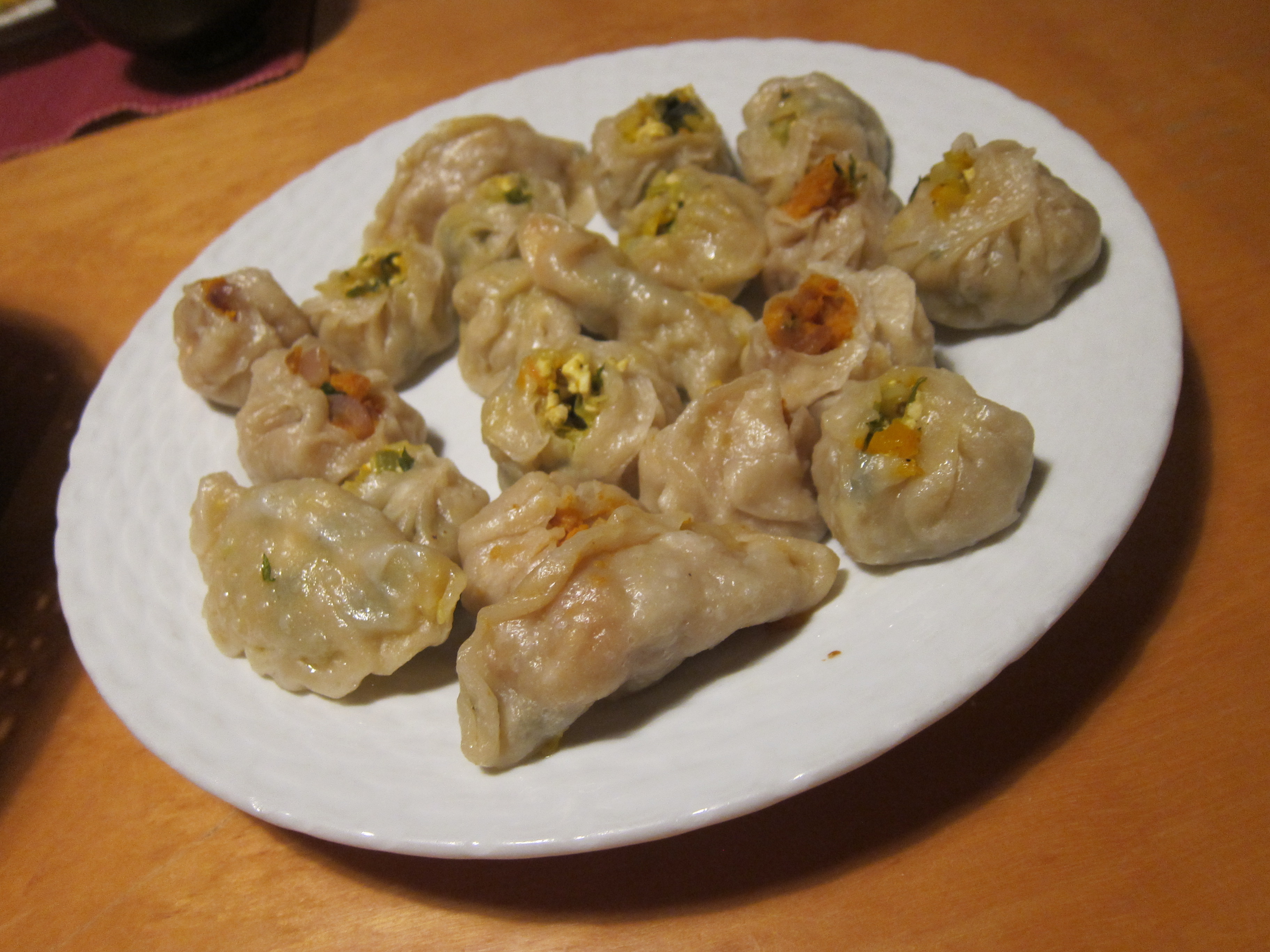 I wish I could share Togo’s recipe but just like most great home cooks, he did this entirely by instinct and chuckled when I asked about a recipe.

Having tasted his buuz, though, I can tell you they’re out of this world. Bite-sized, juicy, delicious and addictive. Perfect for any afternoon in front of the telly.

Annabelle‘s Idiazabal and Black Pepper Gougeres at Glass of Fancy

Linda‘s Trio of Salsas from Oaxaca at Spicebox Travels

Renee‘s Shredded Sesame Chicken at My Kitchen and I