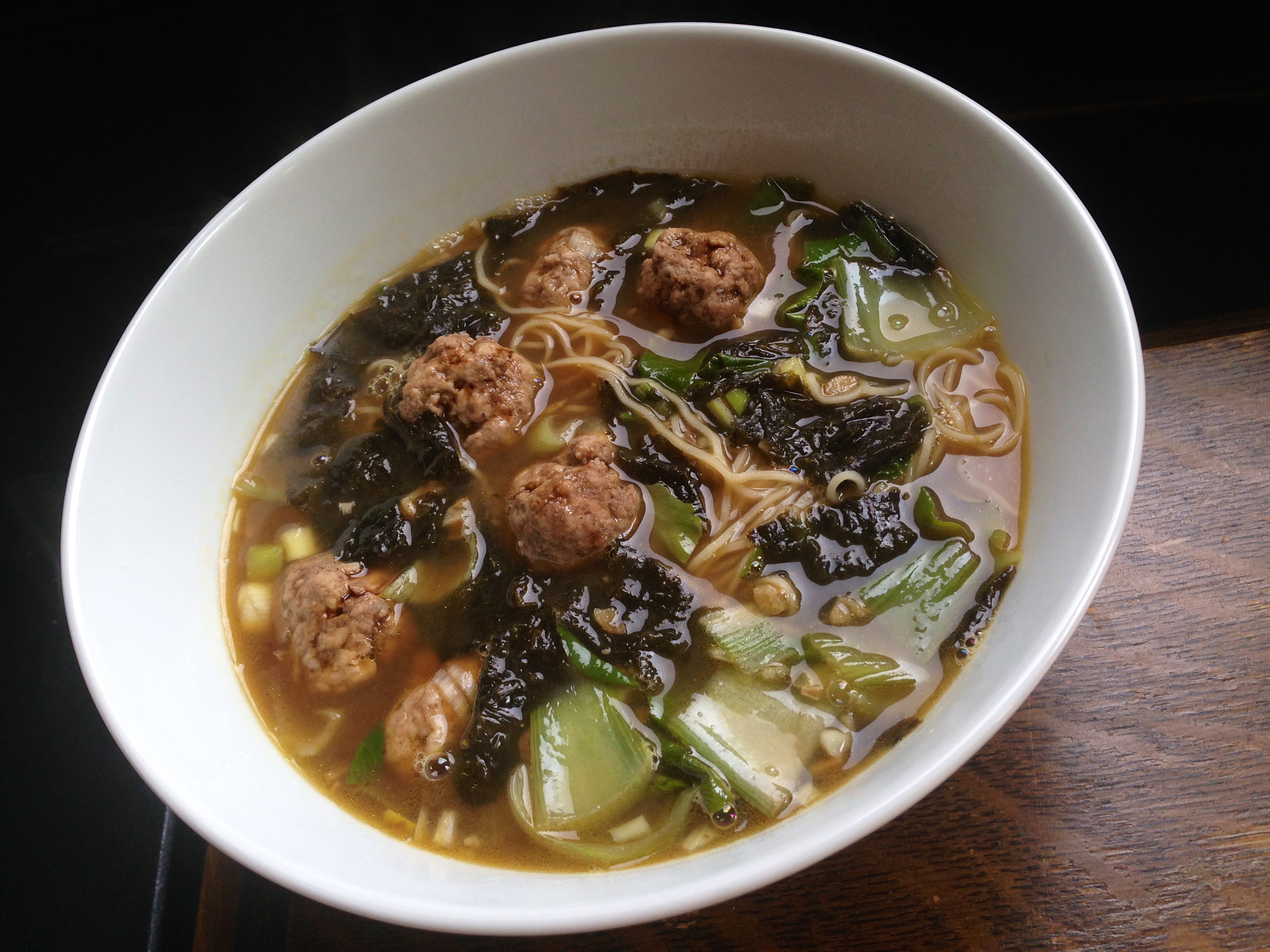 Now, this bowl of noodles all began when I stumbled upon a bottle of Korean Hyangshin sauce. Most of the words on the labeling are in Korean so I had no idea what to do with it, but a quick search showed that this is a soy sauce fortified with the natural essences of umami-filled ingredients like onion, ginger, garlic, apple, pears and more. It’s used as a seasoning in soups and stir-fries. In fact, it’s often used to add oomph to Korean seaweed soups.

I’ve been a little obsessed with seaweed recently — both as a snack (so much healthier than chocolate) and in soups. So out came the pot and the experiment began.

After stir-frying some onion with baby anchovies — whose flavor I love in any soup — I tossed in chicken broth and a bunch of ingredients, including seaweed and bok choy.

At this point, if you’ve used vegetarian broth and no anchovies, this could remain a vegetarian soup. But you know me, I’m a meat girl. So out came the minced pork, marinated and then tossed in as small balls.

How was it? The fact that I wrote down the recipe should be proof enough. Each sip, each bite, was a sheer delight — the combination of salty seaweed, earthy anchovy and pork and the slight brightness of the fresh bok choy bits was terrific by the mouth.

And if it’s true that these flavors are going to mingle more and intensify overnight, well, I just can’t wait for lunch tomorrow. Buon appetito!

Marinate minced pork with generous dashes of white pepper and Sichuan pepper, if using, and several big splashes of soy sauce and dark soy sauce, a dash of sesame oil and fish sauce. Gently knead mixture together and set it aside.

Heat about a generous dash of sesame oil and a splash of vegetable or corn oil in a large pot (enough to fry the minced garlic in). When that’s sizzling, toss in the garlic and stir fry until fragrant (about a minute) then add dried baby anchovies, if using. Stir-fry to mix that up for less than a minute — or until fragrant. (Note: If not using baby anchovies you can add dashi granules later on if you have it on hand.)

Carefully add broth in, stirring well. Once that comes to a boil, add in the bok choy and coarsely ripped seaweed. Mix well and let that come to a boil, then add Hyangshin sauce.

While this is boiling, bring a smaller pot of water to boil and cook the noodles in them, drain and set aside in a bowl.

Form small meatballs — about 3/4 of an inch — out of the pork and gently add that to the broth, mixing well. When that comes to a boil, taste the broth — if you’d like it more diluted, add water by the half cupful until you’ve reached your desired flavor. If you want more flavor, add small splashes of soy sauce. Finally, add a tablespoon of sesame oil to the broth and toss in the scallions, mix well then ladle the soup over your noodles. Serve immediately.